Time To Go Cruising : The Eastern Side of Fiji
Savusavu, Viani Bay, Albert Cove and Taviuni

Following the family visit it was nice to have the boat to ourselves again with no fixed agenda.
Leaving Musket Cove marked the start of our Fiji cruising season which would see us heading to the eastern more lush and remote areas of the country.
I say lush because  the eastern islands get way more rainfall than anywhere else in Fiji, and remote because that’s just how it is. There are no high end tourist resorts, no  fancy marinas, not many roads and very little chance of spending money. Pretty much the only people who visit way over here are cruisers like us.

After a monotonous  seventy three mile, ten hour motor job due to a complete lack of wind, we  traversed the west  and northern sides of Viti Levu passing both Nadi and the industrial city of Lautoka. We finally turned off the engines and dropped the anchor at Nanunanu – I – Cake Island where we spent our first night.


We briefly caught up with friends Matt & Karen from “Where 11” before hitting the hay.

The following day was another epic one.

At least we did get to sail for most of the 80 mile reef strewn hike across to Savusavu.


The small town of Savusavu  is located on the south side of the Island of Venua Levu which is the northern of the two main islands of Fiji.

Savusavu is the only port of entry for eastern Fiji and sits on the banks of a narrow but deep body of water, almost a tributary of the larger main bay one could say.
There are many mooring balls here and one smallish dock known as The Copra Shed Marina which accommodates maybe a dozen boats. We arrived just on dusk and were lucky to spot a vacant mooring in the near darkness. A helpful chap who noticed us struggling to pick up the ball with it’s very short line  thankfully came out to help us tie up for the night.


We stayed for a couple of days and wandered around town stocking up on fruit and veggies at the produce market and buying a few bundles of Kava root, which I’ll explain the significance of in the next post, as well as fresh bread from the bakery and a few supplies from the the two small supermarkets which sit opposite each other.
Nothing like  a bit of in your face competition. Town is somewhat small. The main drag follows the waterfront with the bus depot and a string of shops nestled either side. In twenty minutes you’ve pretty much seen it all. 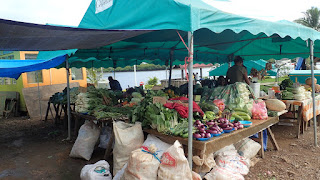 On the day we were leaving we got a panicked email to ALL our email addresses, followed by an equally panicked phone call from our friend Dave on “Rewa”. His generator had suddenly carked it, which is damn serious when you have guests on board as he did, and he asked if we could possibly buy a large portable generator and bring it along with several jerry cans and fuel to him in Viani Bay, sixty miles further east.
Without batting an eye we said “yes“ ‘cause that’s  just what fellow cruisers do out here when you’re in a pickle. You help each other out. Good karma and all that.

We’d planned on heading to Viani bay anyway to catch up with both Dave and co as well as Eric and Vandy on “Scoots” so it was no big deal.  The extra day even gave us time to visit with English friends Tom, Emily and their two boys Sam and Will on “Bonaire” who had just that morning arrived in the anchorage. So everything worked out extremely well.

As soon as we were anchored in Viani bay Dave was in his dinghy and over to GWTW like a rat up a drain pipe. His face lit up like a christmas tree once he saw the large box taking up a major part of our cockpit’s real estate. Within minutes of manhandling the big beast back onto Rewa he had it fired up and life was slowly being breathed back into Rewa’s struggling battery banks. Team GWTW had completed the Rewa rescue mission just like pros.


Over the next few days the crews of Rewa, Scoots and GWTW shared many happy moments together.
The divers of the group dived the famous White Wall on Rainbow Reef while the snorkelers  of our floating families were content checking out the various  reef fish and corals in the clear shallow waters. 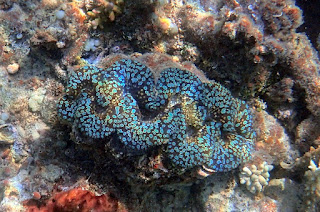 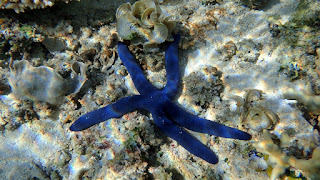 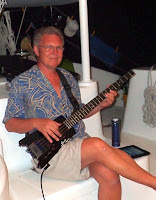 One night the local dive resort put on a traditional Fijian feast, also known as a Lovo, for all the cruisers and their resort guests.

This is how it works…
A fire pit is dug in the soil early in the day and wood is placed in the pit with volcanic rocks placed over the wood. The fire is then lit and the stones are heated. The food, usually chicken, pork and whole fish is wrapped in either tin foil or tight ribbons of banana leaves,  and is placed on top of the stones.
The food is then covered with coconut tree fronds and covered in soil and rocks to seal in the underground oven’s heat. A wire rack is usually placed over the top to slow cook the veggie component which is usually yams,taro, cassava and potato. 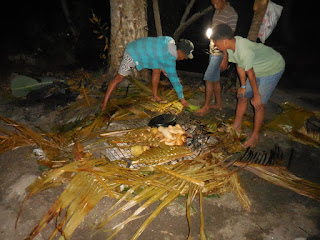 The whole shooting match is left to cook slowly over many hours, sometimes as long as five. The results are absolutely delicious and a great meal was had by all. There was more food than you could jump over and we felt stuffed after woofing it all down including desert with ice cream. What a treat.


After leaving Viani Bay we moved further east to Rabi Island and the uninhabited indent in the reef known as Albert Cove. This little spot above water was lush with thick jungle like vegetation while under the water  fabulous coral gardens  bloomed and small but ever so entertaining colourful fish went about their busy lives. 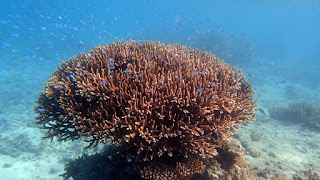 We spent a few nights here in with Vandy and Eric from Scoots before we parted company and made our way back to the island of Taviuni where a couple of yacht friendly Aussies run an upmarket dive resort called Paradise Resort….and it truly was. 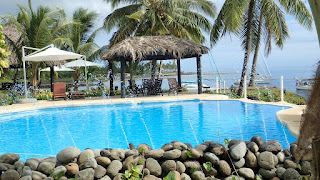 They offer free mooring balls to visiting yachts and encourage cruisers to come ashore and make use of their facilities.They can even supply you with fresh veggies from their organic farm. We signed up for a buffet dinner and  a Fijian dancing and singing show that evening which was great.

Up early the following morning we were well on our way at 0600 for the  sixty five mile jaunt across to Vana Belavu Island and the famed Bay of Islands. 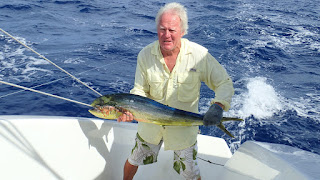 Along the way we caught a good sized Mahi Mahi.

In our opinion Mahi is one of the best table fish in the ocean and we looked forward to enjoying  a few meals compliments of Neptune.