Time to go Cruising : Island Hopping in the Hauraki Gulf 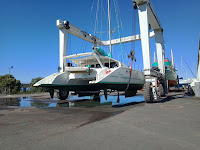 Once again a year had flashed by and it was time for GWTW to get her bottom painted again. There had been much debate as to which haul out yard  as there are quite a few here to choose from, but the winner was Port Whangarei Marine Centre. This was mainly due to the size of the travel lift, it’s really big, and the fact that the tarmac area where we would be parked was cement rather than just  loose gravel, which makes the decks really dirty. The haul out went very smoothly. The guys in the yard are excellent at what they do.

Ten days later with all our jobs finished we were back in the water looking very spic and span. After a few days of provisioning we headed back down the river and some 68 miles south to the Hauraki Gulf area, just a stones throw from Auckland. We’d heard excellent reports from other cruisers about this area and were looking forward to checking it out and most of all being out on the anchor once again.

With the promise of decent westerlies  for the first few hours to push us along we rolled out the jib and sailed comfortably in flat water . Then just as was promised by the Met Service, the wind died and south westerlies took their place, meaning we had to fire up the engine to punch into the wind and waves. Not a big deal really.


Our first stop was at the Island of Kawau, and with the wind really honking we tucked up close inshore at Harris Bay. We were well protected here and  from our snug spot you would never have known what the blustery conditions  were like outside.


After two nights here we moved around to beautiful Mansion House Bay. As the name suggests the bay is named after the gorgeous 1800’s stately home and gardens that adorn the waterfront.

Originally the residence of the island’s copper mine superintendent, both the island and the home were purchased by Sir George Grey, a former governor in 1862. He expanded  and remodeled the home and  planted extensive gardens which included many exotic and native species of trees as well as introducing quite a exotic number of animals. These included  Weka, Zebras, Monkeys as well as Wallabies, Kookaburras and Peacocks, the later three are still found roaming the grounds of the house and the island. 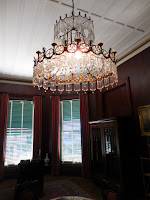 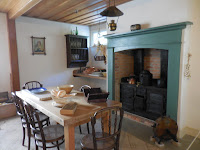 Mansion House is now under the guardianship of the Dept. of Conservation and is open to the public for tours. The fee is a mere $4 and it is  thoroughly worth every cent, The home’s interior, completed with fully furnished period décor, is absolutely sensational to walk through.

The island has many well defined hiking trails and though we didn’t manage them all we did do a couple, one being out to the old coppermine. It was a nice way to see the island, though most of the island is out of bounds, being privately owned. But never the less a good stretch of the legs for a  couple of hours there and back, through pine forests and cool fern filled valleys.
While on the island we also stopped by the friendly Kawau Boating Club for a long lunch one day. It was a tad chilly and after the meal we trotted inside to finish our vinos in front of the pot belly fire. It was a real hardship to tear ourselves away from the warmth, but eventually we had to as the staff looked like they were packing it in for the day. 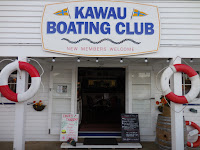 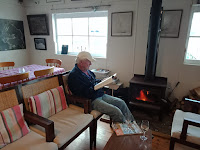 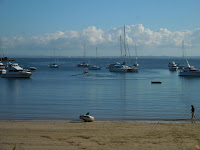 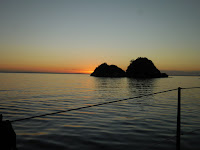 Moving further south in the Haruaki Gulf our next stop was at beautiful Woody bay on Rakino Island for a couple of days. We thought we had the place to ourselves until Saturday rocked around and we we joined by 27 other boats. We couldn’t believe that we never heard a peep from any of the other boats for the next two days. Come Sunday arvo one by one they all went back to wherever they’d come from and once again we owned the sea bed. And that's just the way we like it.


From Rakino we had a nice sail in light air across to Waiheke Island. The northern end of this little gem is home to many wealthy Aucklanders. Well, you couldn’t really call these dwellings homes as such, they’re  more like modern day mansions the exception being that most are actually just holiday homes.


The rest of the island is far more down to earth and modest. We took the coastal track past many of these substantial properties and were absolutely gob smacked. They must be owned by the New Zealand equivalent of the Vanderbilt's we reckon.Catching the local bus is a great way to see the interior of the island. And for us, anchoring in Rocky bay on the island’s south side presented us the opportunity to do so. There are a couple of small towns dotted along the route with funky cafes, wine bars, restaurants and shops. It’s a quite the  tourist island with many B&B’s and a host of winery's offering cellar tastings and upmarket estate dining options. Serviced by ferries from Auckland every hour or so, if you are a nine to five landlubber it’s a great  place to escape from the hustle and bustle of the big smoke. 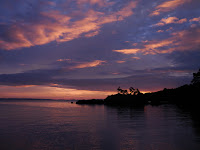 With the weather about to take a turn for the worst we made a bee line  across to the Corramandel Peninsular to seek refuge for the next five days. The forecast was for 45 knot winds clocking through every direction. We had time to pick out the eyes of a few anchorages before we settled on Squadron Bay in  Te Kouma Harbour. This place was bullet proof. Enclosed by high hills on all sides, no matter what mother nature through at us we new we’d be safe and we were. With 200ft of chain out we didn’t budge.   Two other boats joined us for the big blow  but there was plenty of room for all. The cows on the hills were very nonplussed about the whole weather event, I guess unlike us, they were used to it.

Sadly, that weather blew away our chances of sailing up to Great Barrier Island which was the main reason for making the cruise down to this area. But that’s life. The other reason that Great Barrier got canned was that we discovered a leak from one of our underwater lights which meant that we’d have to haul out again asap to fix the leak.


It wasn’t life threatening but really needed attention.  So we headed back to Whangarei and hauled at Marsden Cove on their you –beuat new hydraulic trailer. It only took a few hours to fix but we were glad we did. Nothing like piece of mind.

It was a short little TIKI tour of just a few of the Gulf’s Islands but one that we really enjoyed.