Niue, the rock of the pacific 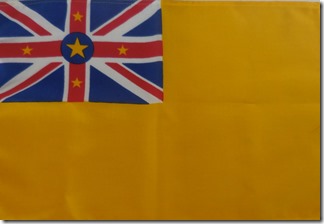 “Fakaalofa Lahi Atu, Welcome to Niue”, That’s what the tourist brochure says. Niue, a territory of New Zealand, is yet another spec in the south pacific as we journey further west across this vast horizon of blue. It is nicknamed “the rock” for reasons that become apparent once you see the place in daylight. Measuring roughly twelve miles by ten it is a low island made completely from jaggered volcanic rock on which 1500 people call home.

Our three night  passage from Palmerston in the Cook Islands was yet another mixed bag of weather and not all favourable. We made two attempts to sail down to Beverage Reef but with the wind angle all wrong we gave up and continued straight on to Niue. Arriving into an anchorage at night is not usually what we do, however we had no choice in the matter here. Rounding the southern point of the island the port of Alofi came into view. The dock area was lit up like a Christmas tree as the tri-yearly cargo ship was ablaze with lights that shone out over the mooring field. Following the lead lights in towards the town wharf, our powerful spot light picked up the two lines of day glow orange mooring balls with reflective tape. We headed over and tied ourselves to a ball. It was twenty five minutes after mightnight, time to cook dinner. 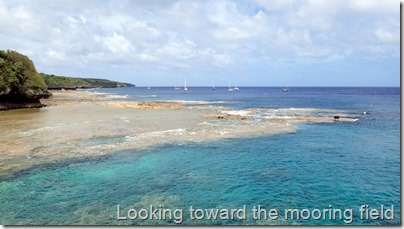 Daylight came too early for us but up we got  bleary eyed when our vhf radio burst into life. Niue radio was calling us to meet customs on the dock at 10am. Our first challenge of the day apart from waking up was to get to the dock. 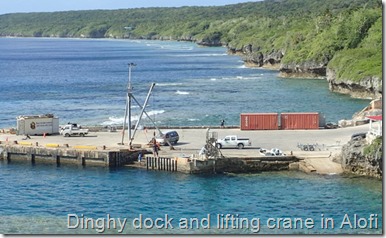 Here in Alofi you don’t just sidle up to the dock and tie up your dinghy. Oh no, no, no. This place is an open roadstead  and with the swell wrapping around the wharf it’s mandatory that all dinghies and fishing vessels be taken out of the water via a small crane. This is a tricky and scary maneuver for the first time novice. You need to be all set up with a four-point bridle  arrangement to hoist the dinghy before you arrive at the dock and then be fleet of foot to attach the crane to said bridle and bail out before the swell overtakes you and you get a good soaking. It’s an adrenaline pumping moment'. 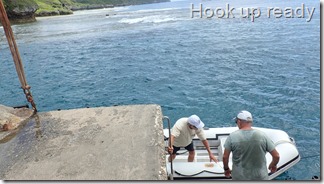 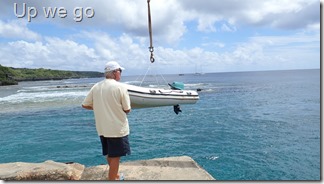 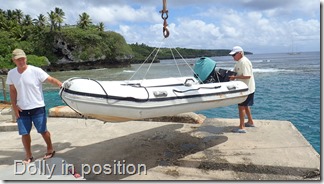 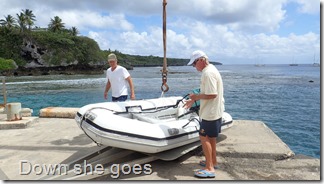 Luckily we already have a bridle permanently attached to our dinghy as this is how we lift it back onto GWTW after an outing. Then with one person operating the crane, the other guides the now airborne dinghy onto the awaiting dolly. One you’ve got that down pat it’s a piece of cake. We watched on as another dinghy went skywards as their bridle slipped and the outboard and dinghy dangled vertically over the water. 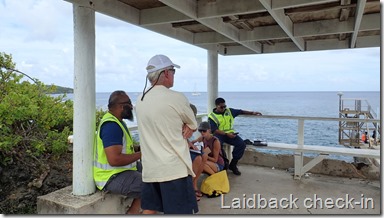 Waiting on the dock were the customs officials who no doubt have a good chuckle at the antics of the newbies in town. With forms filled in and no monies to be paid until departure we decided to stretch our legs and checkout the town. First stop was the bank, after all we needed some NZ dollars in case we found something of interest. Town was pretty low key, a few restaurants and cafes, the tourist center and a couple of small grocery stores. It didn’t take long to breeze through. 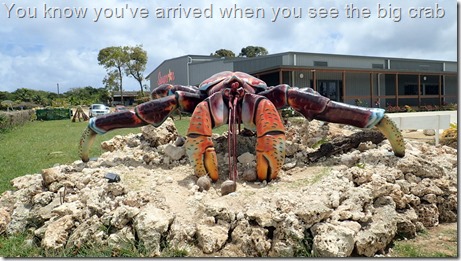 In  company with Ken and Isabell from “Aquarius” we ventured further afield to the outskirts of town until we found the new Swans supermarket with the crab outside, and customs bond store which had both relocated to opposite the bowling club. Both were a real find.

The supermarket is stocked high with NZ products and the bond store, well we were in heaven. NZ wines, beers and liquor's all at duty free prices, and as much as we wanted to purchase on the day of arrival and again on the day of departure. So we bought up big after being in French Polynesia where you need to take out a mortgage to afford a bottle of half decent wine. As an added bonus the store delivered us and our booty free of charge to the dock. 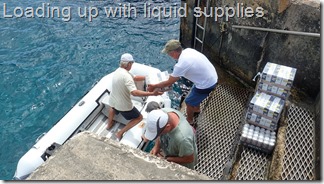 Not wanting to sit idle on a Sunday, when nothing in town is open except the Indian restaurant, which temporarily doubles as the Niue Yacht Club and the telecom office open 24/7, we decided to organize a car for two days so the four of us could explore the island. 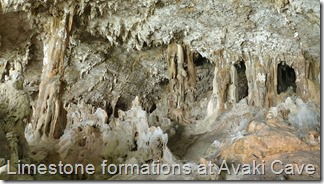 Over the two days our road trip took us to pretty much all the main sites. We followed the sea tracks (trails) down to impressive limestone caves , rock pools and chasms. Sparkling swimming holes enticed us into the clear waters and winding paths delivered rock arches that mother nature has sculptured just perfect for sitting and pondering. 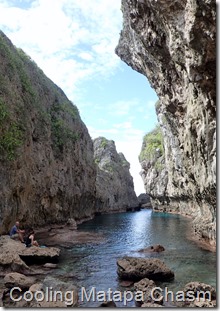 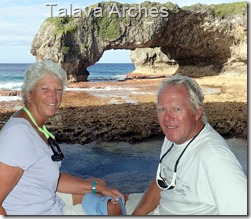 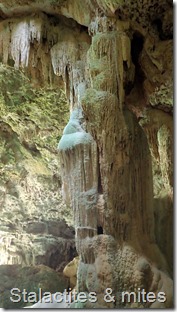 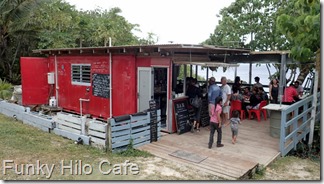 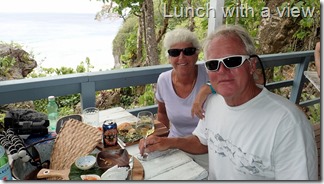 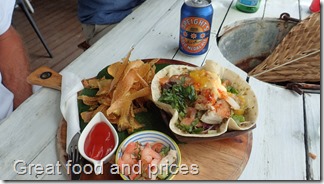 We stopped for lunch at a few miles north of Alofi at the Hilo beach café, a trendy Sunday eatery housed in a shipping container with a fabulous view over the ocean and then again for a late dinner at the beachfront Washaway café. 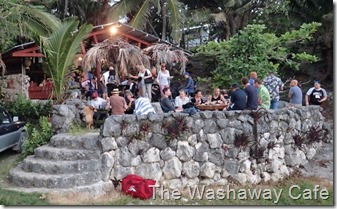 Open only on Sunday, cash only, the later was unusual in the fact that it has a self serve bar with an honesty book to write down what you drink and an order book to fill in your choice of meal. Both places were chockers. 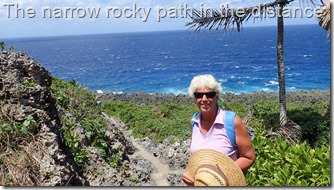 Day two, we headed over to the east side of the island. More caves were explored and an oasis found after traversing a weather beaten  skinny path through a fairytale like area of lava pinnacles. Climbing down the steep Togo Chasm wooden ladder was not for the faint hearted. White sands and palm trees graced this little patch of element protected rock formations after stepping off the last rung. It was definitely worth the effort to find this unusual sight.

One rather strange sight that we often saw during our travels were  the many and varied grave sites along the roadside. They  just seemed to be scattered randomly around. Some with headstones, not many were unmarked. We asked the reason behind this and were told that  family members are buried on family land so as to be close to those still alive no matter where it is located. That can be in the front yards of a home, a veggie field or just along the side of the road. Some graves are lavish whilst others are not. 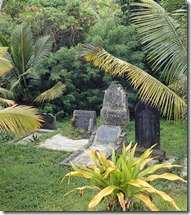 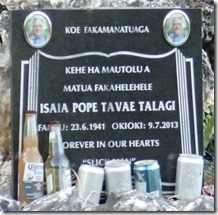 Our final day was spent clearing out with customs, who generously picked us up from the dock to complete the paperwork at head office, hitting the bond store one more time, purchasing a few delicacies like meat pies, yogurts and ice cream and having a feed of fish and chips before one last snorkel around the reefs in the anchorage. 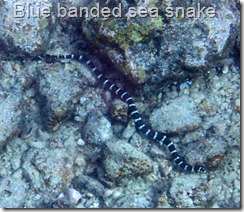 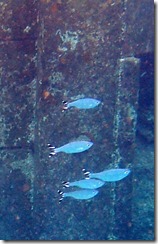 Although our stay in Niue was rather brief we thoroughly enjoyed this little gem of a  country and felt that we’d seen it all. The time had come to point our bows toward Tonga. 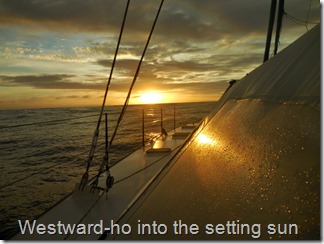 Mooring balls: Cost $20 NZ p/day payable the day you leave at the Gili's Indian restaurant in the town square next to Telecom.

Checkout fees: $ 80 p/person plus a one time fee of $25 for rubbish disposable

Internet: available from Telecom office for $5 p/hour or at the internet café, but don’t know the price. Also one internet provider gives a one hour free trial

Email ThisBlogThis!Share to TwitterShare to FacebookShare to Pinterest
Labels: Niue