Maupiti : The Up’s and the Down’s

Lying roughly 30 miles northwest of Bora Bora, Maupiti is one of  the western-most islands of the Society group. As we sailed away from postcard perfect Bora, the island disappeared behind us, engulfed in a sheet of light rain. With a total lack of wind we had no choice but to engage the iron sails and soldier on to the monotonous thump of our engines. 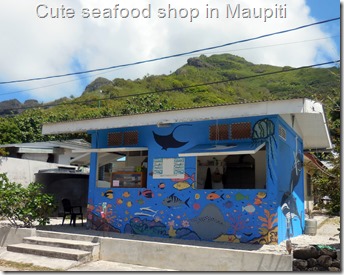 Arriving at the Pass Onolau on the southeast side of Maupiti, it was just as we imagined it would be. The southeast swell was rolling in creating a lumpy and confused sea with standing waves and white crested breakers. A formidable sight for the uninitiated.

The lagoon water is in a continuous state of ebb reaching speeds of 9 knots as it rushes towards the narrow pass.  Liam did a sterling job driving the boat in through the doglegged entrance and within minutes we were inside the calm turquoise waters of the lagoon. 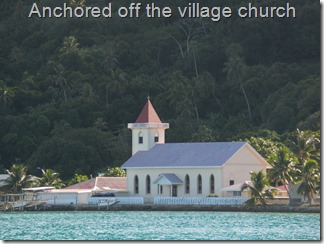 Standing like a sentinel on centre stage was lofty Mt Teurufaatiu which was just begging to be climbed, but not today for we weary travelers. We motored up to the village, plopped the anchor down across from the church and settled in for the evening, listening to the harmonies of the late afternoon choir practice. Thinking it might be nice to have a meal ashore, Liam did some recon only to be told that despite what our guide book said, the restaurant was closed until Monday at 12pm. So it was back to the galley for you know who.

Next morning we motored down to the reef anchorage on the south corner where the water was much, much clearer. Our Italian friends from Y2K and Obiwan were already there and we’d planned a snorkel safari with them to swim with the manta rays. These majestic creatures  show up like clockwork each morning between eight and ten. 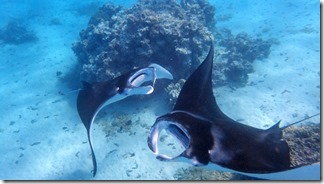 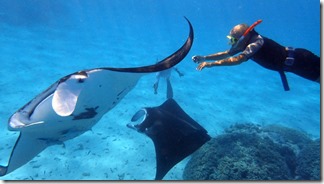 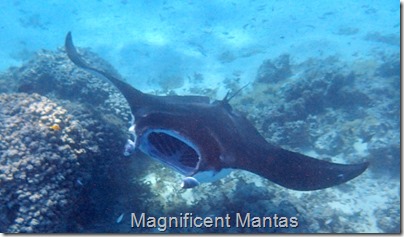 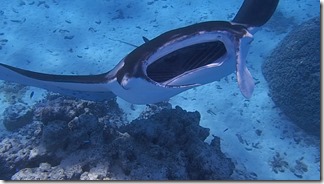 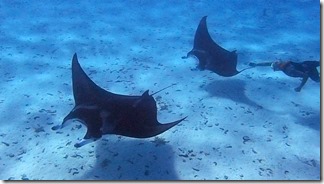 They line up in an orderly fashion  to have their wings and mouths cleaned of parasites by the tiny fish that inhabit the coral bommies in this part of the lagoon. It’s a bit like going to to the dentist to have your teeth cleaned, though I suspect way less painful.

During the process the mantas swim in slow circles, mouths wide open as the cleaning detail do their stuff. As soon as they are done the rays close their mouths and off they go back out  through the pass to the deep waters of the south pacific.

Next morning we all set off early in the dinghies back up to the village to tackle the mountain before the heat of the day set in. 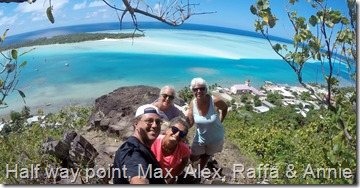 Only four of our party of eight reached the summit. It was  definitely no walk in the park and way harder than in looked. Having to scale up over rough terrain and slippery rocks stopped four of us at the halfway point and that was just fine for us. Sweaty, panting, ashen faced person after person descended the trail past us  each saying it was a real feat of endurance to make it to the top. Apparently the last 30 minutes was hand over hand pulling yourself up the escarpment using ropes to reach the summit.  I’m proud to say that Liam made it, though he  looked as though I should have been dialing for an ambulance by the time he got back to us. 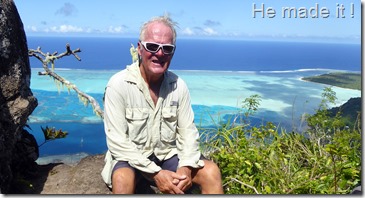 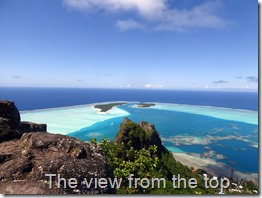 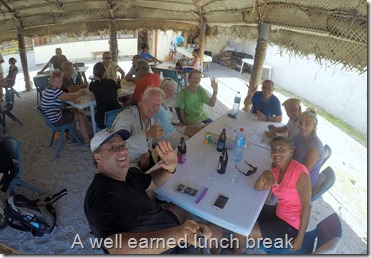 A delicious lunch at snack Tariona on the waterfront was just the ticket after the hike, even for those of us who only managed the halfway point.

With our possy of five boats getting ready to depart the following day, the next morning was spent topping up fuel tanks, chasing non existent wi-fi and gathering plentiful fruits from the ever so friendly locals whose trees were dripping with ripe mangos and pamlemoose.

Maupihaa : Where everyone knows your name

Departing Maupiti was a piece of cake, no big rollers like there were on our arrival. At a distance of 100 miles further west  the atoll of Mauihaa  lay. This small  low atoll has the reputation of having a very narrow  pass into the lagoon if the swell is up. We most definitely had our fingers and toes crossed  that this would not be the case when we arrived.

Within ten minutes of exiting Maupiti  we’d hoisted the mainsail and our spinnaker had set nicely out the front, pulling GWTW towards her next destination.  All looked good as we ghosted along in light air. Then the inevitable happened. The wind got lighter and lighter, so down came our pretty spinnaker. With the wind dying to nothing before our eyes the mainsail started to flap and one of the batons which runs horizontally across the width of the sail to give it shape, popped out from it’s pocket. So down came the mainsail  and on went the motor. For the next 96 miles the only sound  we heard was the thumping of our yanmar diesel. We were in company of six other boats and we were all motoring, The wind gods had well and truly deserted our little fleet.

We arrived at the pass at 10am and yes, at a mere 60 ft wide, it was very narrow but the edges of the reef were clearly defined, all we had to do was stay in the middle and we’d be OK. The current through this pass is constantly ebbing  at a rate of up to 6 knots but with two engines and flat seas it was easy to navigate.

Once inside the waters of the lagoon were flat, flat, flat and what a joy it was to turn off the engine! Peace and quiet at last. Very few cruisers stop here, but it is definitely worth a visit. The atoll was devastated by a direct hit from a cyclone in the late ‘90’s and many of the villagers moved away. Now only four families are left comprising of a whooping sixteen people many of whom are related.

Most cruising boats that call into  Maupiti, our previous stop, are usually asked by the locals if they would be willing to take either supplies or human cargo or both to the families who still reside there as the atoll only gets a supply ship  visiting every 6-8 months, and that is very weather dependent. Four of our little fleet were asked and of course obliged. 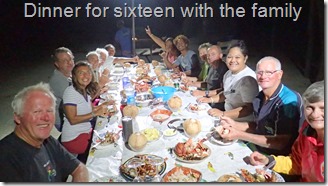 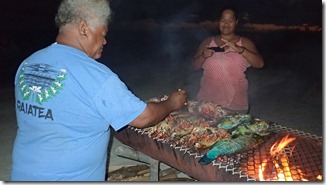 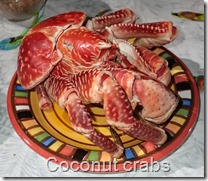 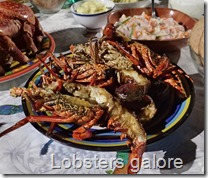 In return for the generosity from the cruisers the families put on a dinner ashore. For us it was a lavish banquet of BBQ-ed  reef fish, tuna pate, coconut crabs, poission cru and fresh lobster, We cruisers brought side dishes  and deserts to complement the meal. It is a wonderful experience meeting this isolated community who make us all feel so welcome and love to laugh and  socialize with people other than their own families.

After a few days in the north anchorage we made the move to the south east corner of the lagoon for better protection from some forecast strong winds coming our way. It was a perfect anchorage in 10ft with a sand bottom, palm trees ashore, sandy beaches and clear waters. 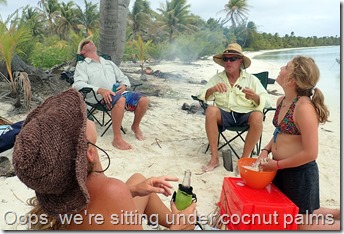 One afternoon we had a great beach BBQ of parrot fish kebabs and fresh damper bread cooked over coals, with new found friends aboard the NZ cat Chaos, their two kids and adopted Red Beaked Tropic bird named Bob.

They had rescued Bob from the sea and certain death some two months prior. 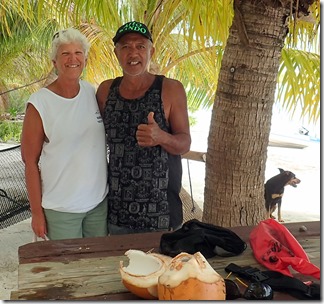 He was just a baby who’d fell from his cliff face nest and still could not fly or feed himself. Everyday the kids would cast a net and catch small fish for him and they took him on regular outings in the dinghy and on the paddleboard hoping he would soon be strong enough to spread his wings. To date Bob is still on board.

On another excursion ashore I met Edward who was lying in a hammock reading a book . Edward  spoke perfect english and has lived alone in his one room house for sixteen years. We sat and chatted under the trees a while and he cut down a fresh coconut for me to drink. 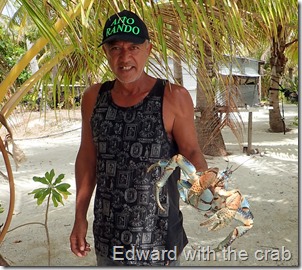 He then showed me a large coconut crab he had caught the evening before. It was a beauty. As I was leaving he asked if I’d like it and said that  if I came back at 5pm he’d have it cooked up for me. I offered to pay him for his trouble but he insisted that it was a gift for just taking the time to sit and talk. As I left I noticed an empty box of low priced red wine on his fire heap and made a mental note of that for later. Liam and I both went back to  collect the crab and gave him a much nicer bottle of red wine. His face and eyes lit up and he thanked us profusely as we said our goodbyes. 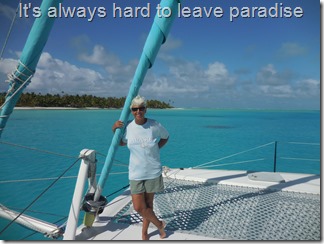 Tomorrow we’ll be leaving for Palmerston in the Cook Islands, a run of 540 miles and three nights at sea. and crab cakes will definitely be on the menu.

We have absolutely enjoyed our time in French Polynesia and it is sad to leave.The generosity of the people and the places we’ve visited in this far flung isolated country have all been special and will have a place in our hearts forever.

All good things come to an end sometime and new adventures and destinations lay ahead. It’s time to move on.