It was 1900 hours as the tiny island nation of Niue slipped away behind us. Ahead lay 240 miles of ocean and a two night passage. Along the way we would lose one day of our lives as we crossed over the magical line of longitude known as the International Date Line. Whether we wanted to or not at that point we would be thrust forward into tomorrow land.


Our passage turned out to be a very mixed bag of weather. Dark menacing cigar shaped clouds loomed across our path accompanied by heavy rain squalls that obliterated the horizon on all sides.
Strong winds whipped up the seas making for a rather uncomfortable ride at times.

Once the rain had cleared a double rainbow filled the sky lifting our spirits.
A brilliant sunset complete with the fabled green flash was followed at dawn by a stunning sunrise welcoming us to a new land. 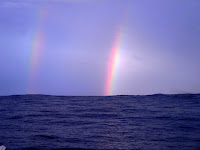 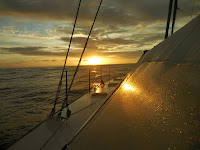 The Kingdom of Tonga is the oldest and last remaining Polynesian monarchy. It is also the only Pacific nation not to have succumbed to foreign rule. Tonga comprises of 171 islands of which only 45 are inhabited.

The islands make up four chains which run pretty much in a northeast-southwest direction. The rarely visited volcanic Niuas chain lie to the north while the Vava’u group, the most popular area for cruisers and tourists sit 184 miles further south.

The Ha’apai group of low coral islands with beautiful sandy beaches make up the central zone.
They are just a day sail south from the Vava’u while at the bottom of the chain lies the Tongatapu islands and the capital of the Kingdom, Nuku’alofa.

Making landfall mid afternoon on October 6th  and rounding the top of Vava’u  we were surprised to see towering white cliffs and wooded hills. Where were all the palm tree studded islands we’d come to love?

To be honest we were more than a tad disappointed at our first glimpse of Tonga. The landscape looked more like Australia than a South Pacific island. Continuing on we  followed the winding waterway inland until we reached the main town of Neiafu which is also a port of entry for visiting yachts like us.


Neiafu is the nerve centre of the Vava’u group. Apart from Customs and Immigration there are cafes, banks, internet, fuel, LPG, grocery stores and an excellent vegetable market.

After completing our entrance formalities we picked up a mooring ball and settled in to the place home for the coming week.

Being 90% landlocked the harbour has excellent weather protection from a sailors point of view and it was just as well as we copped a hammering of rain and wind during our stay here. “Unseasonal” weather some would say.
Yeah, yeah, how many times have we heard that line!

Despite the inclement conditions we did get to see most of the town and meet up with cruising friends both old and new as well as some that we’d only ever met over the radio waves. So after sailing thousands of miles listening to their melodic tones, being able to put faces to the voices of Sylvia and Tom from the yacht Cinnabar was quite novel.


We found that all the Tongans we met, whether adults or children, loved to stop and chat and always had perennial smiles on their faces and laughter in their voices.


Sundays in Tonga are strictly a day of rest by law. The air is quiet as is the town. There are no shops open, no lawns being mowed, no washing is hung out and no fishing or swimming is allowed and that goes for we visitors as well.

The only activity on Sundays is to go to church and have a big traditional family feast afterwards. So when in Rome as the saying goes…, on with our best clothes and off we trotted up the hill to St Josephs Cathedral.

We’d heard about the wonderful Tongan church choirs but nothing could prepare us for what we witnessed. There just aren’t enough adjectives to describe it, but the words hypnotic, beautiful, harmonic, breathtaking and astounding spring to mind.

The church was packed to the rafters with men, women, teens and children dressed in their finest with an overlay of traditional woven pareos with shell or flower designed belts. 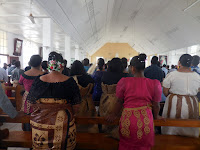 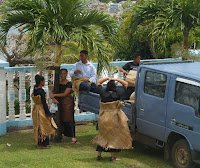 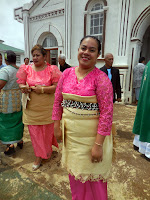 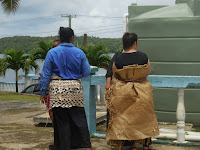 With the weather improving we made a dash to get over to another popular spot named Hunga Haven island which has a very narrow entrance into a enclosed lagoon.

With only three moorings available it was essential that a booking was made. Brian runs the show over there and is available on the VHF radio to take bookings and give advice re the very narrow entrance as well as many other things regarding the island.
We spent two nights out there in company with Aussie friends from Where 11 and US friends from Aquarius. Snorkeling and relaxing were our only two activities although the boys did try their hand at spearfishing, but to no avail.

Leaving Hunga we headed back to Neiafu to sign up for a whale watching day trip. Humpbacks make the journey each year from the Antarctic to breed, give birth and raise their calves in the warm tropical waters each June. 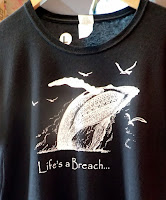 As it was now October the season for viewing and possibly swimming with the Humpbacks and their calves was quickly coming to a close, we really didn’t want to miss out on seeing these magnificent creatures before they headed back some six thousand klms to the Antarctic waters.

The annual migration of these whales from their summer feeding grounds in the Antarctic to their winter breeding grounds in Tonga is one of the largest and longest animal movements on the planet.

Swimming with the whales had been on our must-do bucket list for a long time. And while it sure wasn’t inexpensive, it proved to be priceless. 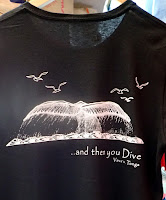 We booked with Beluga Diving and headed out in search of the giants around 8am. All the tour operators talk to each other so if one company spots the whales they call the others so that everyone gets a bite of the cherry.
Being wild animals, of course there is no guarantee of a sighting but our group of five had all our fingers and toes crossed. There is of course a guarantee that you will not be given a refund.

By 10 am we’d spotted the whales, it was a mother and calf. They were lazily swimming along heading south, but moving too fast for us to keep up with them had we been in the water.
So we admired them from the confines of the boat and that was pretty neat. An hour later another call was put out.
The whales were resting on a ledge outside the entrance to Hunga Haven lagoon.
It was the very spot we’d spent the last two nights and right where the boys had been spearfishing. Our crew made a beeline for the location.


The rule of fairness is that each operator takes turns at letting four swimmers plus a guide in the water at any one time. Being the second boat on the scene we only waited a short time before it was our turn. In we dived and made our way over to the whales. At first they were way down deep, mum, dad and baby and were hard to see in the deep blue haze.
Then slowly every 15-20 mins they’d come to the surface for air and hang for a while before descending again.  In whale parlance when they are stationary at depth this is called a resting state.

The baby on the other hand wasn’t able to stay down for as long as mum and dad and would float back up every 5-10 mins.

Just as all toddlers on the planet are, bub was very curious of these strange looking creatures floating on the surface and would nudge a little closer to us each time.

It was thrilling to see these animals so close but it was time for us to let the next tour have a go.

Back onboard we waited patiently hoping that the family would stay a little longer so we could have another swim with them. Our patience paid off and we actually got to swim with them another three times, it was a record said our guide.

The fourth time was the ultimate adrenaline rush. All the other tour boats had gone so we had these massive humpbacks all to ourselves. Mum and dad were every bit the length of GWTW, that’s 52 ft or/16m, and baby at just 4 months was already was at least 20 feet or more. Our friends’ cameras had run out of both memory and battery power but I was Johnny of the spot and grabbed the money shots. 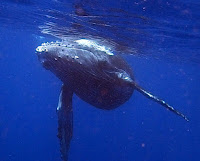 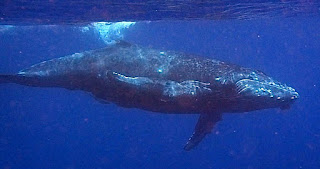 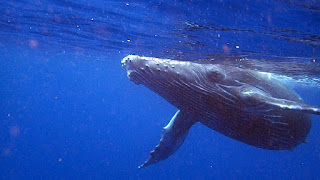 My Olympus Tough camera captured the footage of our truly up close and personal encounter with these gentle giants. We were merely feet away, within touching distance of these megaliths of the ocean. It was magical.

Then as if by way of an encore as our boat pulled away the baby came up and breached in front of our eyes. A final farewell perhaps. It was awesome finish to a special time in our lives. I still  grin from ear to ear when I remember those moments. What a fantastic once in a lifetime experience it was. 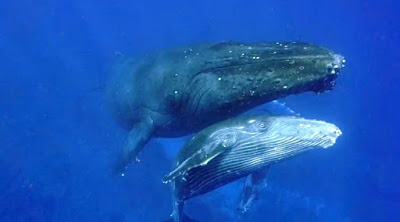 Leaving our whale friends behind our next stop was at The Swallows Cave where we got to swim with thousands of tiny fish in a bait ball. This was yet another magical moment.

The light filters down through the clear waters  from a hole far above in the cave top. The water, the fish and light make the scene quite surreal.

It reminded us of all those wonderful underwater photos you see in diving magazines, with the exception that we were in the middle of it all.

With the weather still not playing nice we stayed in Neiafu for a few more days. We, along with other cruisers attended a Breast Cancer benefit dinner under the stars with singing and dancing . It was a very good roll up and a substantial amount of money was raised for such a worthy cause. 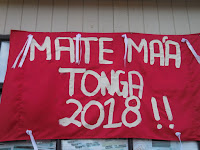 With the Australia - Tonga Rugby match the following weekend the whole town became draped in Tongan flags and banners.


The streets and shopfronts became a sea of red. The game was broadcast on the TV and every man and his dog came out to barrack for their team.

We had a small contingent of Aussies at our table but not surprisingly we were vastly outnumbered. 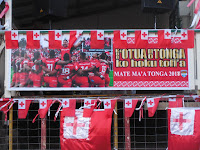 Before we left town the local Fishing Tournament happened along. These guys really know how to fish and the size of their catch put our efforts to shame. Mind you we really  wouldn’t want anything near that size hauled up the transom of GWTW. 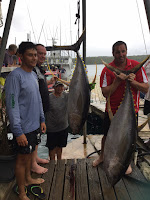 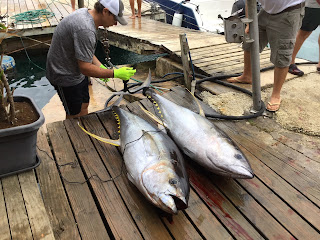 The weather gods had not be kind to us during our stay in the Vava’u group but we made the best of what we had . Sadly we never did make it out to the picturesque anchorages on the reef atolls due to rain, strong winds and as they called it on the radio “destructive sea conditions and swells”
We did however seek out the more protected anchorages of Vakaeitu Island with its wonderful colourful coral gardens, Port Maurelle and Nuku Island before calling it quits and heading south the low atolls of the Ha’apai group of islands 60 miles further to the south. 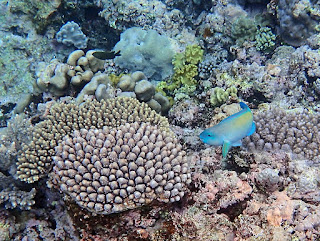 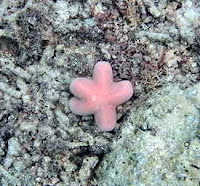