Our trip over from Raiatea to Bora Bora was most definitely not one of our best, the trip itself just was fine but the trifector of failures wasn’t an upside by any means. 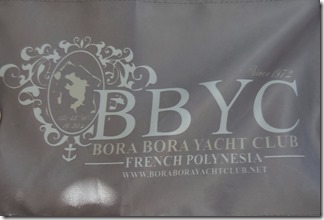 The conditions were such that we decided tp roll out our big reaching sail, the screecher. Having just spent over US$500  on “in the nick of time“ repairs to it while in Tahiti we figured we’d give it a go. All was looking rosy as our boat speed slowly increased and GWTW took the bit between her teeth and headed for the iconic island of Bora Bora. We were settling into a nice rhythm when a strange sound filled the air. Confused at first as to what it was, I lifted my gaze forward and upward and there  was the culprit. The head of our screecher was systematically delaminating and becoming threadbare.

Daylight shone through where once was mylar fabric. The repairs had held up ok,  the failure was near the head of the sail, quite a surprise. So sadly, it was money down the drain on the repairs. Now the challenge was to furl it before what was left totally separated from the furling foil. Slowly but surely we got it furled though it did look a bit like a dog’s breakfast by the time we’d finished. With the wind increasing we had no choice but to sort the mess out once we arrived.

Next up Jimmy our raymarine chart plotter, (named after the great navigator James Cook), decided that after 14 years he was done with navigating and called it quits right there and then. Obviously Jimmy was in cahoots with our screecher of the same age. Just as well we’d bought a backup plotter before we left the USA, just in case. With only a few miles left ‘till we got to Bora, the replacement would be getting plugged in tomorrow. We still had our iPads to use for navigation, so no worries there.

Our third and final strike in this ballgame happened when the fisherman of our crew, who will of course remain nameless but not blameless, very uncharacteristically  decided to leave the port side trolling line out while coming in through the pass in the hope of snagging a suicidal fish. Well there was no trophy fish for dinner, however he did manage to catch and strangle our port side propeller while we were backing down to set the anchor. Trying to reverse a cat using one engine is almost futile as the boat wants to rotate in a circle. So we ran out a heap more chain and left well enough alone while we regrouped to assess the situation.

It was most definitely time for a gin & tonic. What a cluster f **k of a day we’d had. Oh, and “welcome to Bora Bora”, the god of mishaps must have been saying to himself. 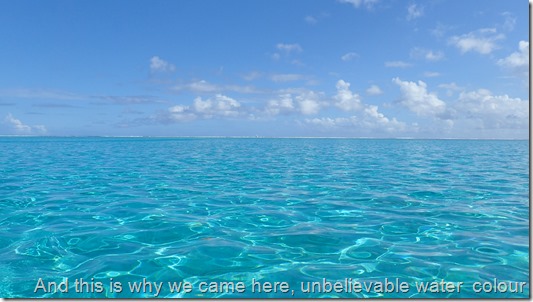 With the onset of a Maraamu (the prevailing south-east trade winds on steroids) due tomorrow afternoon we had to extract the digit and sort out a few things. The major one was getting the fishing line untangled from the prop shaft so we’d have a useable port engine. This turned out to be a far from simple exercise. As the line had wrapped around the shaft and tightened, it actually pulled the shaft back and along with it our engine which moved backwards round 1/4 of an inch or so, quite minor but still noticeable when the engine mounts were inspected. A similar thing happened in Cuba with a mooring line and actually destroyed the engine mounts while moving the engine some distance aft. 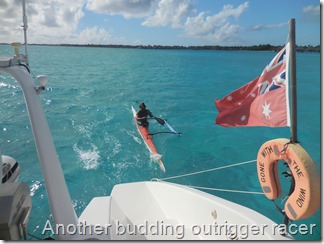 After more than an hour of tedious, tiring work in the water, pretty much all of the fishing line was removed. It was frustrating but essential work. The port engine remains a little out of position but no real drama, and can likely be rectified when we next haul the boat. There is now an absolute ban on trolling inbound through any pass anywhere. Installing the spare plotter and tidying up the screecher to a respectable look were a piece of cake compared to the underwater problem.

Well the Maraamu blew like the clappers for the next seven days and nights and us along with everyone on a boat in Bora hunkered down. For us it was just a pain in the arse,  but we really felt for the folks on the charter boats whose schedule just doesn’t allow them the luxury to sit it out for a few days. We watched many of them take to sea in the midst of the high winds and the accompanying ugly seas of up to eight feet as they battled to get back  to their charter base in Raiatea. As much as we’d have rather been getting on with  exploring what was on offer we filled in our time rather well. Menial chores which never make it to the top of the list were attended to and with a warp speed internet signal beaming into  GWTW courtesy of the Hilton Hotel, researching and  booking marinas and flights for while we’ll be in NZ at the close of this year’s cruising season was an absolute breeze. 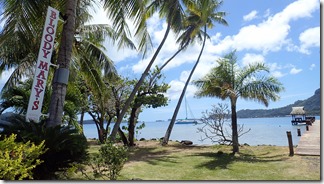 Finally the wind stopped and the beautiful lagoon returned to how it looks in the brochure, perfect that is. So we headed around to the mooring balls outside Bora’s famous restaurant, Bloody Mary’s. 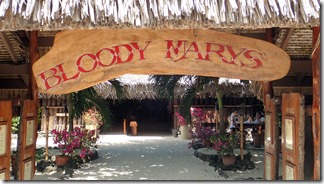 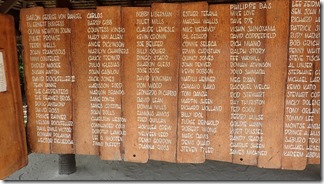 The list of rock, pop and movie stars who have lingered over a drink at the bar or a meal here is quite outstanding. Think of anyone in “the business” and their name is likely etched into the board of fame at the entrance. Having been boat-bound for an entire week we ‘d planned on a night out  of dinner and drinks but some well heeled person had booked out the whole place, bar included for seventy of his closest friends, bummer for us.

Disheartened at our poor timing and with dinner plans now out the window, we hiked up to the signal station on the hill above the anchorage. Talk about  mind blowing views over the lagoon, there aren’t enough superlatives to describe what our eyes could see. 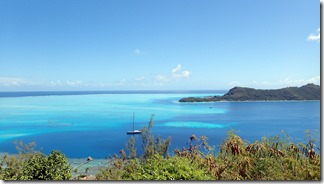 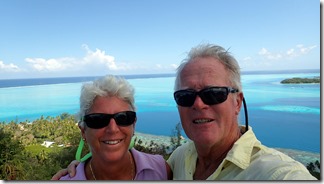 That scene will be etched into our memories forever. We did get to experience BM’s the following day when we stopped in for a few signature drinks, a Bloody Mary of course and lunch. Would our names end up with the rich and famous too? Probably not. 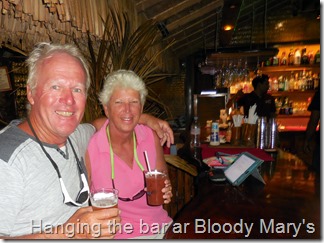 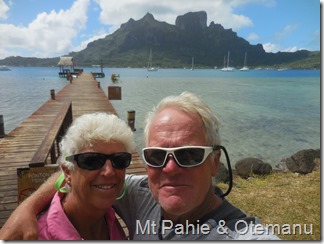 After a quick stop in the main town of Vaitape  for some much needed fruit, as well as a visit to the Gendarmerie to lodge our exit  documentation for our imminent departure from French Polynesia, it was time to have a gander at the east side of the lagoon. 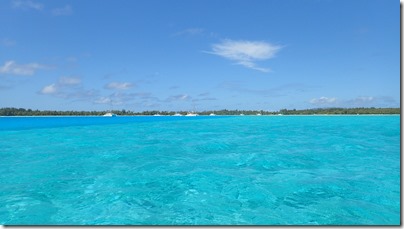 It’s on this side of Bora that  paddock after paddock of overwater bungalows stretch out over the picture-perfect turquoise waters like tentacles of an octopus. Here you can check-in to any of the brand name hotels, the Four Seasons, Le Meridian, Intercontinental, Sofitel etc. Or if your credit card doesn’t self combust spend a few nights at the home-away-from home for the super rich and super famous, The St Regis Resort. It will only set you back a many thousands of dollars per night, but hey whose counting? 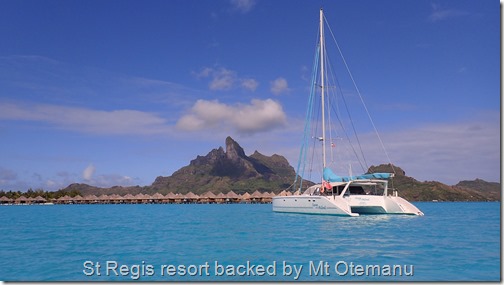 So we decided to check out what all those bucks got you and anchored right in the tranquil lagoon behind the St Regis, meters away from these absurd costing bungalows. We didn’t get the to sample the culinary delights or the spa and massage,  but we did swim in the same waters as the mega rich, had the same romantic views, listened to the same annoying sound of jet skies zooming pasts and quite possibly drank the same French wines. The same stars twinkled above us and as the sun rose next morning we treated to the same view  as the people with deep pockets over towering Mt Otemanu.

The cost for us for the identical surrounds that these people pay through the nose for was absolutely nothing. A little while later we jumped into the dinghy and went in search of the manta rays which reportedly show up early morning in a shallow channel not far from the hotel, but alas no mantas today. So off we motored to the southeast corner of Bora and anchored in the clearest pale blue water we’ve ever dropped the hook in. 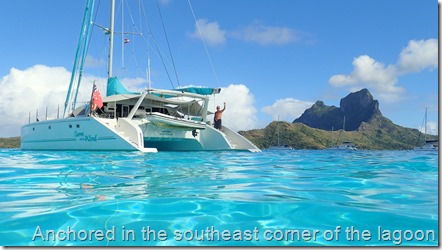 Pure white sand sat just two feet under our keels. It was really something. Another dinghy trip to see eagle rays was again fruitless so we headed over to a small motu to investigate the coral gardens. At last success. There were hundreds of fish of all sizes. The small ones were not shy and it was a right in your face experience. 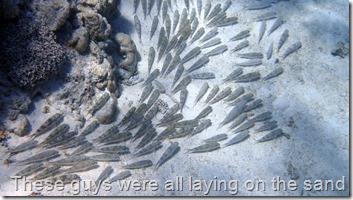 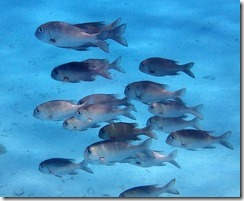 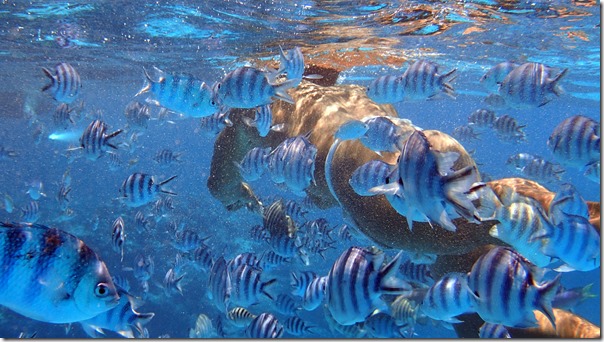 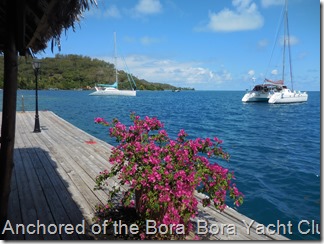 Everything comes to and eventually and so too has our time here in Bora. There looked to be a good weather window approaching over the next couple of weeks so our minds were now turning towards the next few legs across the Pacific. It was Friday afternoon and we needed to get back around to town to have our passports stamped and pick up our clearance papers from the Gendarmes. Sadly, this will mark the end of our eleven month stay in this wonderful country. 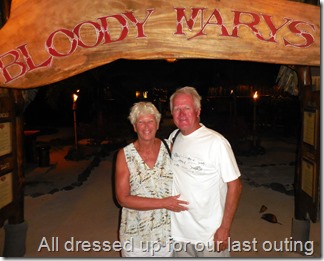 Our final evening was spent back at Bloody Mary’s enjoying  a few exotic Happy hour cocktails and a few plates of delicious bar food.

With papers in hand officially we are no longer in French Polynesia. Unofficially, if the conditions are right, we will call in at two more islands, Maupiti and Mopelia.

They will be our final stops in French Polynesia before heading to new destinations as we sail west into the setting sun.