As the days roll on here in Fakarava we never tire of the scenery or the laid back pace of life. We’ve particularly enjoyed the gorgeous anchorage of Harifa, in the south east-corner of the atoll, which is a true south pacific postcard but in real life, not just on a piece of cardboard. 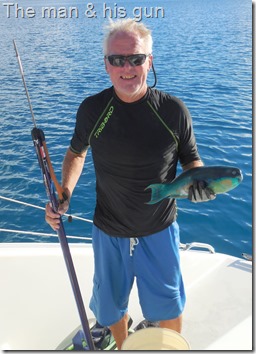 Liam is now the proud owner of a new spear-gun made by Marco, a local chap with a business called  “Blue Water Killers”. Marco custom makes the guns to suit the owner’s needs.

So while we have been killing time during my slow recuperation, Liam has been honing his skills with his new weapon and the sea has been providing a very good bounty as reward for his efforts. 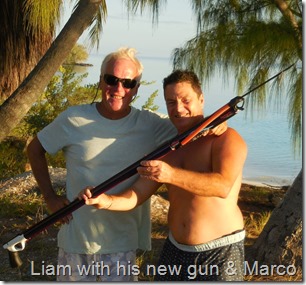 I should mention that not all fish caught in the Tuamotus are safe to eat. Some species are ripe with the ciguatera toxin which will make you terribly sick and in some cases put you very near death’s door. So you really have to check with the locals before you take a bite. For us in the Fakarava lagoon the known safe species are the blue-green parrotfish, Unicorn fish, Surgeon fish, Dogtooth’s,  and in the south end of the lagoon Camouflage Grouper.

There is an excellent online guide, www.ciguatera-online.com which spells out reported cases and the species involved for the islands of French Polynesia. It is worth a look if you intend to fish in this part of the world or anywhere for that matter. 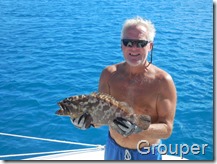 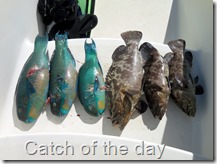 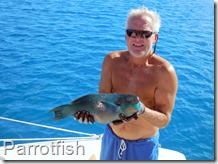 He’s also tried his hand at night fishing from the back of GWTW with mixed results. A couple of grouper have been caught on a hand line but the prize trophy, which was within a bee’s dick of being dragged onboard, was taken by a shark at the crucial moment. Still we did end up with the head. 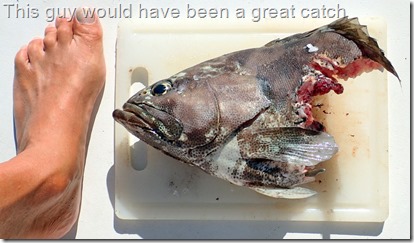 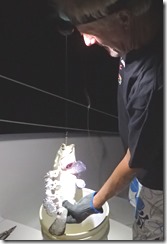 Other than that we have had a few more catch-ups with old ( Daryl & Annie from No Rehearsal) and new cruising friends ( Peter & Sandra from Mazu11 & Douglas from Gillean) and we’re now waiting on my butt getting the all clear from the clinic nurse next week, for a toilet part to arrive via Fed Ex from the US (luckily we  have two toilets on board so we haven’t had to resort to using a bucket) and for the weekly supply ship to arrive so we can top up our diesel tanks. We haven’t taken on fuel since last September in the Marquesas and we’re getting rather low. 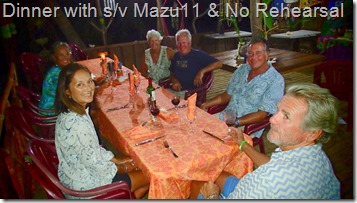 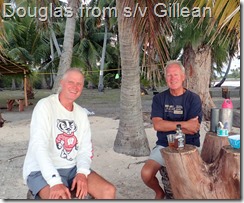 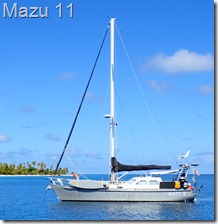 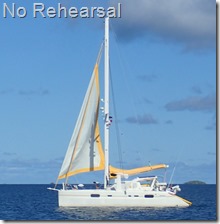 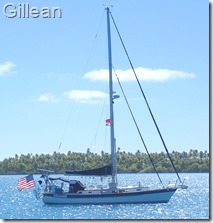 We had yet another lovely dinner ashore last night here at Pakokota  Yacht Services compliments of Agnes’s superb culinary skills. The table was set for ten guests which included us. Pre dinner drinks were being held outdoors and when we arrived the other eight were already imbibing. 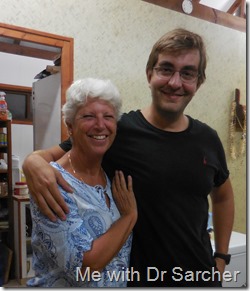 There were three faces at the table who looked quite familiar, but one of those faces really had my mind searching the back room of my memory banks, I knew this face but was having trouble placing it. I said to him, “I know you don’t I, and the reply was yes”. I know you also said the rather handsome frenchman. But from where I asked. Well the answer knocked me for six. I was sitting across from the doctor who had very recently preformed surgery on my behind during my medical sojourn in Papette hospital three weeks ago !  The two other chaps were also doctors who I’d seen in the ER .Sure didn’t think I’d be seeing them all again so soon. They were all here to go kayaking and camping on the motus scattered around the lagoon for a few days R&R from the hospital. I never in my wildest dreams have  thought he’d be coming to dinner. 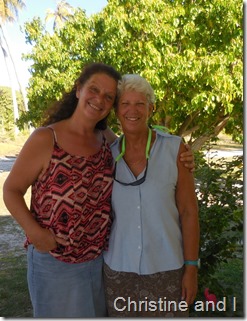 Our last day in Fakarava was busy with a trip up to the village for one last visit to the clinic with my very good friend, nurse Christine. She gave me a clean bill of health and we both had a tear in our eyes as we hugged and said goodbye. She was a real Florence Nightingale that women, and I will miss her dearly. Next stop was a quick trip to the veggie stand  and supermarket, then it was back to the boat to pack away the groceries, top up the diesel fuel, put the awnings away and take a breath.

Come sunrise tomorrow if all the pieces of the puzzle fall into place, including the weather, we will be finally leaving Fakarava after two months and  be on our way to the Society Islands at last. Well kind of on our way as we are going to squeeze in just one more atoll along the way. It’s really hard to tear ourselves away from these beautiful islands when we know we will never be coming back. 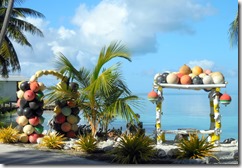 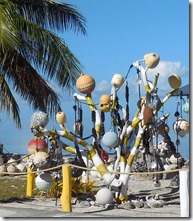 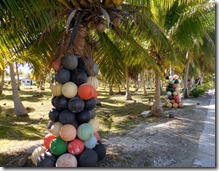 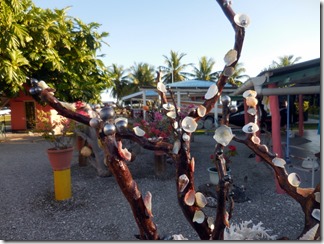 Above and left are a few pics of street art in the village of Rotoava.

Zoom in to the one on the left and you will see the black pearls stuck on the branches and inside the shells, 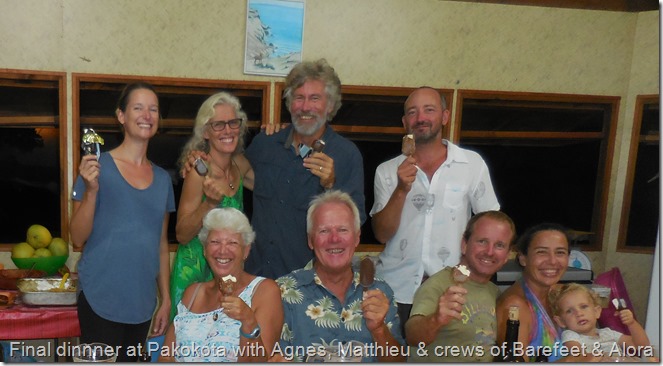 Goodbye Fakarava, we’ve had a ball !