As written in our previous post, we decided to squeeze  in one last atoll of the beautiful Tuomotus before setting sail to the big smoke of Tahiti.

Although we had stopped In the false pass of  Anse Amyot on the north western side of Toua back in December last year, we didn’t have time to explore the  inside of the lagoon that can only be accessed via the pass on the east side of the atoll. The guide books we have on board give this area a big thumbs down, stating that the pass is dangerous and the seabed is littered with coral making anchoring very difficult. So on that basis it is rarely visited by passing yachts. Having spent eight days here we beg to differ. 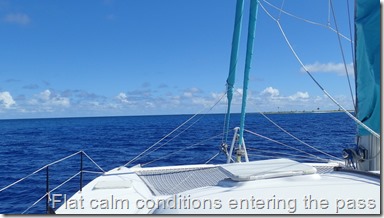 As with any reef pass in this archipelago you need to have a handle of what the tide is doing and time your entry accordingly. On the day we entered the wide pass was flat calm and the water clarity quite amazing azure blue to the sea floor 40 ft below us. It was so clear I kept asking Liam what the depth was as it honestly looked only to be 10 feet, that’s how clear the water was.

Once inside the pass we meandered north following the well marked channel, passing a huge area of sand flats which our friends on Allora had mentioned. They are seriously into bone fishing so this area would suit them down to the ground.

Six other boats were already in the anchorage when we arrived, some of whom we’d spoken to on the radio and a couple we’d met face to face in previous atolls along the way. With all the best spots already taken we scouted around for a bit  ‘till we found a nice little possy to drop the hook for a few days. 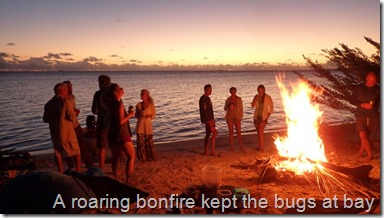 A bonfire rendezvous ashore was planned for late arvo sundowners and nibbles and it was a fun couple of hours. As it is in our line of work it’s always refreshing to meet new folk .

During our meet and greet session the following day’s activities were set in place, a mid morning dinghy excursion to a small motu roughly 3 miles further to the north.

For the hunters and gatherers of the group there would be a chance to express their primitive instincts with a bit  of spear fishing and for those of us more interested in seeing our aquatic friends still swimming, snorkeling and underwater photography would keep us happy. 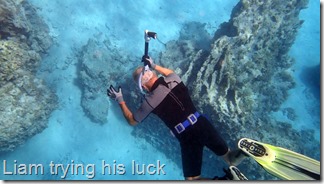 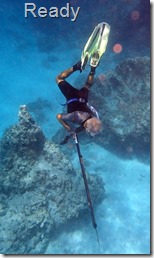 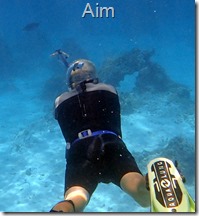 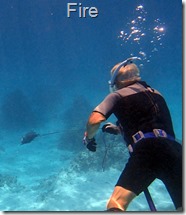 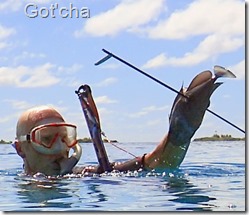 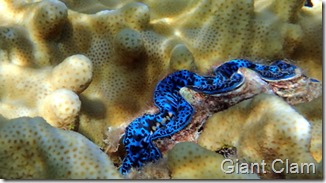 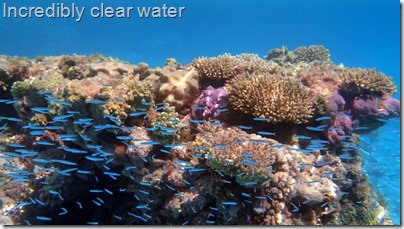 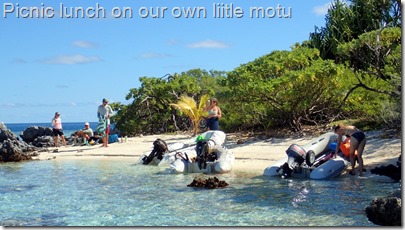 Once the water activities were exhausted we headed ashore to the motu for a picnic lunch where stories of the catch of the day or of the one one that was snatched from the jaws of victory and ended up as lunch in a sharks tummy were enhanced and relived over and over.

Another shore side rendezvous was planned for the evening but by the time we all returned to our respective floating homes at 4pm we were all too stuffed to be bothered.

A few days later with the threat of strong southerly winds forecast our happy little group disbanded. A few boats stayed put to ride out the weather, while others including us moved to the  more protected south eastern part of the atoll.  It was a good call. 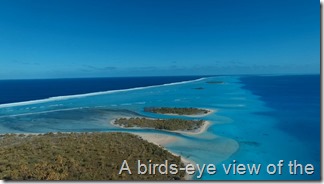 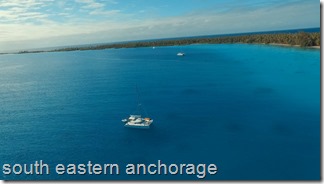 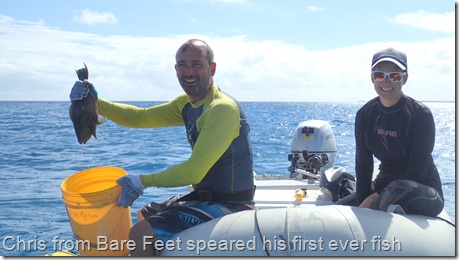 As the wind blew we met up with a few more boats and the fun times continued.

There were several reefs to explore, more fish caught, walks ashore  to stretch the legs as well as evening gatherings on the beach for all creatures great and small. 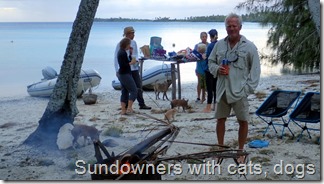 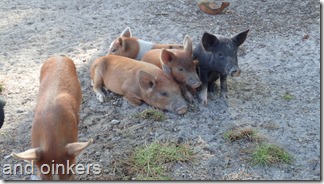 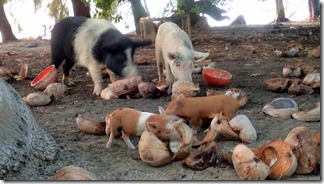 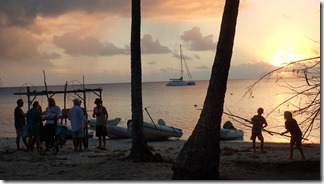 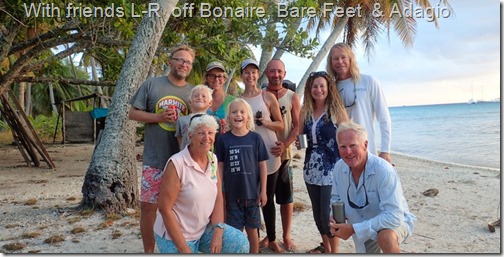 Eventually the good times  had to come to an end as  it was time to get a jig along and head towards Tahiti and the Society Islands which constitute the last group of islands in French Polynesia.

“The downhill run to Papette…”

The ride out of through the pass could only be described as quite sporty. But it had to be done today or else we’d be stuck in the lagoon for another week, so it was now or never so to speak. With the wind blowing strongly from the east we waited and waited for slack tide and the build up of rollers to subside. Wish as we may slack tide which was pretty much a non event. There was nothing left to do but take a deep breath, count the wave sets and charge towards the ugly line of cresting waves. GWTW with her two kickass Yanmars delivered the goods and plowed through the waves like slicing through butter, well butter with a couple of speed humps.

Once outside the pass the seas were on the beam for about 30 minutes, an uncomfortable angle on any boat. At one stage our friends on the cat “Bare Feet” looked as though they were sinking. In reality it was just the height of the waves between the crests and the troughs but it made for a good photo anyway. 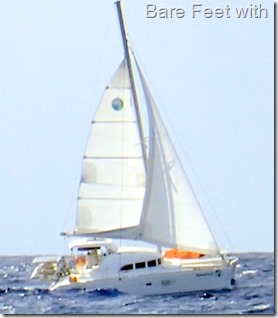 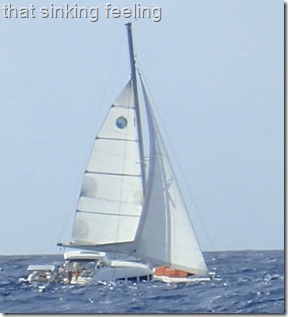 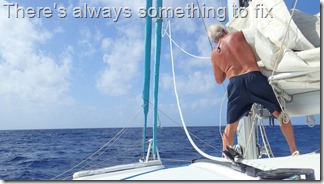 As we raised our mainsail one of the lower batons which give the sail it’s shape parted from the bat car on the mast, so amid the rough seas Liam was up on the roof remedying the situation. Luckily he was able to make a temporary repair otherwise we would not have been able to continue as the baton may have broke in half or worse the sail could have torn.  Not a good start to a 250 mile passage. Once it was all fixed as good as was possible we were on our way once again

We had quite a good two night passage regardless of the mixed bag of weather thrown at us. With a reefed mainsail and full jib we were ready to take on the elements. 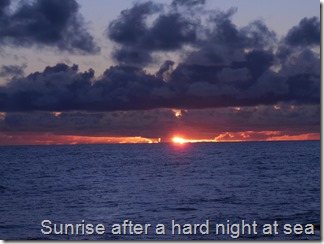 On a regular basis clear skies would  give way to angry looking squalls, and while there was very little wind involved there was truckloads of rain. The afternoon of day 2 was a whole different ballgame though. Squall after squall marched along the horizon ahead of us and with it came bursts of very strong wind. We put a second reef in our mainsail for added insurance. Nothing worse than being overpowered in squalls, being conservative is the name of the game.

Rather than front up to mother nature with bravado, we tucked our tail between our legs and ran up and down the dingo-fence line of heavy clouds like the dog of the same name trying to get to the other side, until an opening appeared to break through. After many hours the gap opened and we bolted for it. Once having crossed the seemingly endless squall line the sky cleared, the wind and rain died and it was smooth sailing in light airs.

Dawn broke just before 6am and in the distance the legendary island of Tahiti began to materialize. The closer we got the more magical the view became. 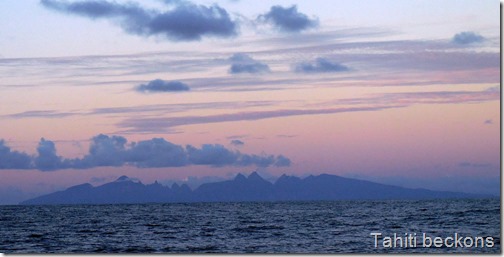 At 1300 hours we dropped the anchor in pretty Pearl Bay, just west of Point Venus. The passage had taken us two days and fifteen minutes, not bad given the conditions. 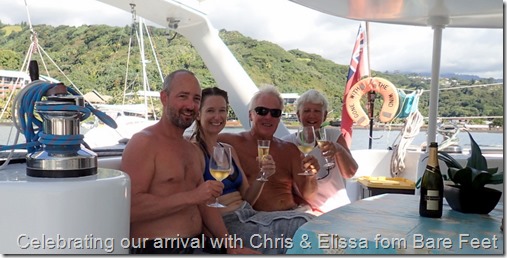 For us, sailing into  Tahiti  means  checking off another milestone of our circumnavigation.

Reluctantly we are starting the final chapter of cruising the breathtaking   beautiful  islands of French Polynesia.