As we followed the breakwall into Shelter Bay Marina the feeling on board GWTW was a bit surreal. After many false starts over the last couple of years ,we were finally here. All things going well we’d be transiting the canal sometime in the next few weeks. But before that could happen there was plenty of hard work ahead of us. The “to do “ list was long. 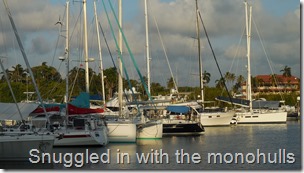 Having backed into our assigned slip without incident the first priority was to connect up our ships battery charger to shore power so that we could charge our batteries without running engines or generator for hours on end, That sort of behavior is a bit of a no-no in most marinas and it tends to piss of your dock neighbours pretty darn quick, making for really bad karma. As the wet season was on our doorstep the skies aren’t always as sunny  as we’d like and our 760 watts of solar power struggles to feed our power hungry home. With two big freezers and three fridges to support we are power sluts.

On board we have a Zantrax battery charger that is compatible with either 110v or 220v. The problem is that this is the second one that we’ve owned and today Z # 2 has also decided to kark it.In the land of electricity Panama is part of the 110v/60 htz family and that family doesn’t get along with 220v / 50 htz family that GWTW belongs to. In plain language we can’t just whip out the extension cord and plug into the grid down here.  The 110v v system is lethal to 22v appliances that have a motor and we have a quite a few of them on board. The big three being,microwave, oven and washing machine and we sure don’t want to have them out of action.

So what to do. Liam put a call out on the morning radio net and our prayers were answered. Another boat had a spare charger that would work for us and they were happy for us to borrow it for the duration of our stay. We were out of jail and my two chock-a-block freezers rejoiced and my fridges did a happy dance.

Our first three days at the marina were really busy. The Admeasurers, the guys who measure your boat top to toe for the canal transit showed up .With tape measures in hand they went to work doing their thing, Ever since  the USA handed back the running of the canal to Panama back on Dec 31st 1999 the transit fees for all who use the canal has changed . Where as under the eyes of the US there were only flat fees, these days  the fees are of the sliding scale nature. If your vessels weighs in under 50ft the fees are not so bad, but over 50ft  the dollars go up dramatically. Although  we are officially  52ft on paper and sometimes when we use the “other” official papers we shrink  down to 49ft this time there was no way to dodge the length bullet. The tape measure doesn’t lie. This time we were measured at 58.6 ft, that includes our pole at the front. 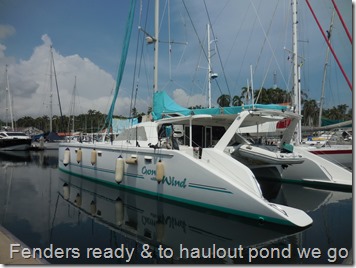 The following day, April 26th was our high stress day . It was haulout day. We always cringe on this day ‘cause if things go wrong During the transition from water to land it can become very ugly, very quickly. The marina boasts that they can haul a vessel with a 29ft beam, well we are 27ft and filled the lift out pond with little to spare. 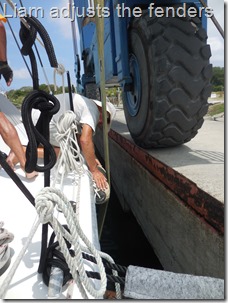 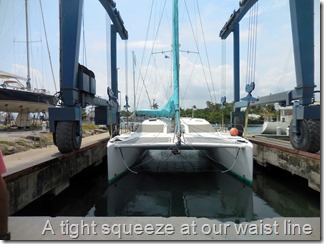 There were quite a few anxious moments as our fenders popped up leaving our hulls just millimeters from the rough concrete sides of the lift pond. All concerned were much relieved once we were airborne and then firmly planted on terra firma. They marina guys power washed us to remove the grime on the hulls taking a lot of the remaining antifoul with it. And just where did all that green paint go? Straight down the drain and into the water! This sure ain’t the USA. 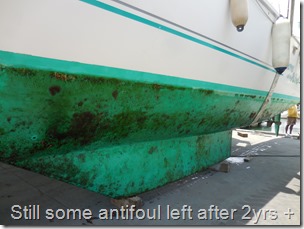 The 27th was visa day. As you would remember from the  reading our Jamaica post we were getting all the paperwork sorted to apply for a long stay visa for French Polynesia. Well today we had to hot foot into Panama City to hand over the paperwork in person. 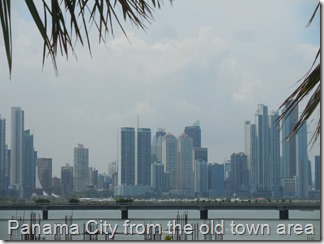 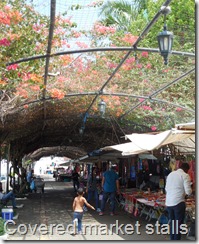 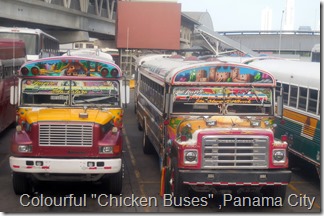 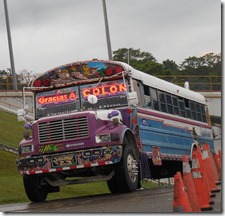 Our interviews, yes one each, were scheduled for 1.30 and 2pm..To get there on time we had to catch the 0745 bus from the marina, then hook in with and express bus , which wasn’t so expressy from  the very dodgy Colon bus terminal to Allbrook bus terminal in Panama  City. Then it was into a cab arriving at the French Embassy with less than an hour to spare. The talkies went well and now we play the waiting  game for around four weeks to see if we got the green light or if we wasted our time and threw away $200 in the process. 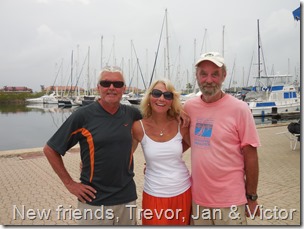 Back on the boat the hard yakka started in earnest. With afternoon storms and rain most days our outside work time was severely limited. Add to that the heat and humidity and the tasks of antifouling the bottom, polishing the topsides and even just working inside saw us absolutely pooped at days end. Thank heavens we’d had the sense to pre-book a room in the marinas’ hotel while we were on the hard.  The A/C was wonderful to come home to each night. 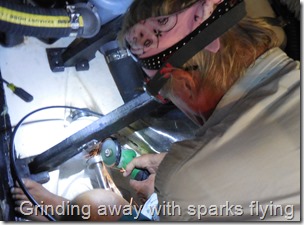 As is often the case an X-factor seems to creep in and catch you by surprise while out of the water.

We had ours which meant that our original transit day of May 7th didn’t happen and we were rescheduled for the 14th. A while back Liam noticed a slow leak on one of our propeller shafts. In order to fix the leak he’d have slide the seal collar along the shaft.

But that wasn’t going to happen as one of the grub screws holding the collar in place had seized up resulting in him stripping the head off the screw. His only option was to cut the collar off with a grinder and fit a new one that we had Fed-Exed down from the states. That might sound a pretty easy fix, but cutting through a 20mm piece of solid stainless steel shortened his life buy a day. It was a very trying event, the depth of which only a cruiser would truly understand. 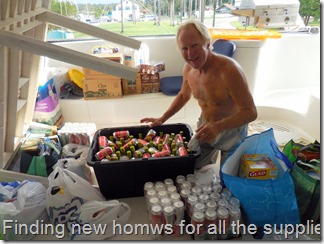 Also while on the hard we made many,many supermarket runs to top up the provisioning as we figured it was way easier to do it via a bus and van than trying to haul in by dinghy once we got to the Pacific side of the canal.

The local Rey supermarket was well stocked but for the bigger bulk items were rented a van and driver who took us to both PriceSmart on Panama City and the Free Zone in Colon. 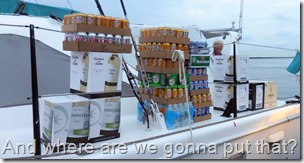 All those trips were well worth the dollars spent and the convenience of packing stuff back while still in a marina . Albeit we had to get it up a ladder and onto the boat. 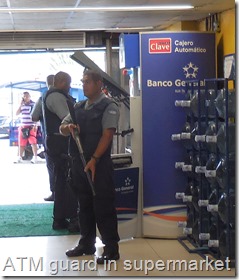 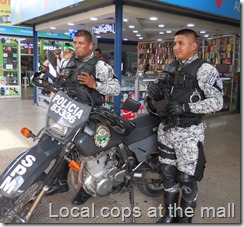 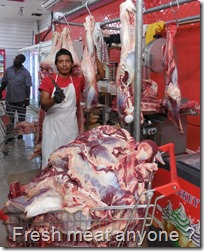 By now it was Thursday May 11th and time for the re-launch. Going back in the water can be as stressful as coming out and it was. Once the travelift had picked us up and started moving us we noticed GWTW was hanging a bit skewiff in the slings and for a while it looked like we might kiss the concrete on the way back down to the water. But with a lot of muscle power from the boys on the dock they managed to hold us straight ‘till we were floating again. 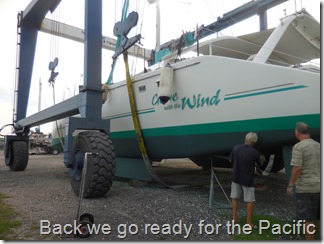 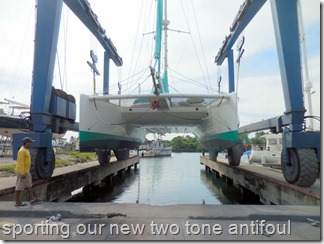 We fuelled up with diesel on the way past the fuel barge after waiting three hours for the barge man to show up. Then it was back to our assigned slip.

With our canal transit now in three days time we had all fingers and toes crossed that nothing untoward would happen between now and then.

Email ThisBlogThis!Share to TwitterShare to FacebookShare to Pinterest
Labels: Panama 2017