After clearing out with customs and immigration in West palm beach ( there's a story behind that which I'll note at the end of this post) and saying goodbye to Bob and Lorraine from S/V Scaramouche, we woofed down a quick bite of dinner, upped the anchor around 8pm and headed out the Lake Worth Inlet just on dark. It wasn't our preferred departure time but as I've said many times before, everything always takes longer than you think. Paralleling the coastline south as far as Miami, we then planned to hang a hard left to cross the Gulf Steam towards Bimini in the Bahamas. 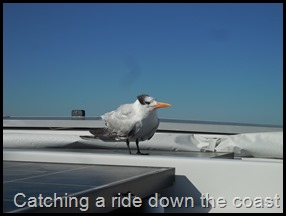 It was a glorious night for a sail. A good size moon lit the way and a blanket of stars twinkled above overhead. The gentle motion of flat seas and a soft west-south-west breeze pushed us along. As a backdrop to all this the lights of Florida and the silhouette of her skyscrapers added to the magic .

I remember thinking how very sad it was that after all these years, six in total, we won't be sailing in the USA 's home waters again. It's strange how the mind wanders at night, but not for long. 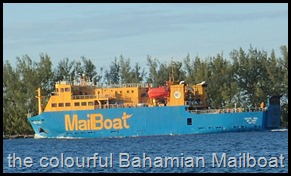 Now one would think that there'd be very little traffic on the ocean at night. Wrong. It's like the friggin’ interstate out here sometimes and tonight was one of those nights. Between cargo ships, fishing trawlers, cruise liners, pilot boats, tugs, tugs towing barges and pleasure craft who all seemed to want the same patch of water as us, well lets just say it keeps you on your toes and keeps the mind pretty well focused.

Our Vesper AIS ( automatic identification system) alarm on our nav computer was sounding off for hours warning us of approaching ships, some a little too close for comfort at times.

The transition from night to day arrives slowly during the winter months and as the sun rose, daylight revealed the deep azure waters slowly turning to the pale hues of the Bahamas. 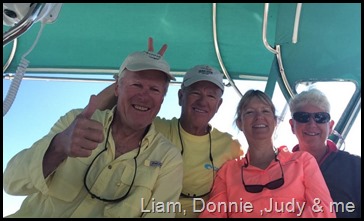 Arriving in Bimini we were greeted by our friends Donnie and Judy from S/V Blue Sky waving enthusiastically from the shore. It was great to see them over here. We were all very excited at the prospect of cruising together over the coming weeks. This was to be their first time for cruising the Bahamas and we were going to show them what we considered all the best spots.

We spent a few days in Bimini waiting for some very strong winds to pass. Tucked up in a well protected anchorage at the far end of the entrance channel we were snug as a bug. The wind howled but GWTW sat rock solid .

At around 5am a construction barge with a huge spotlight brought daylight to our anchorage a few hours early. The skilled captain maneuvered his vessel in rather tight quarters avoiding the three anchored boats . 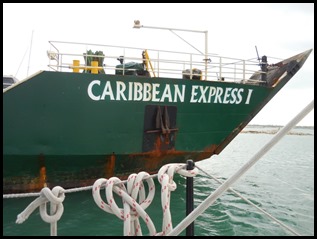 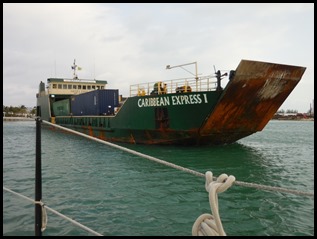 The barge came within a few feet of GWTW which really got our attention. Given that another barge was due in a bit later we decided to relocate to the other side of the bay where nothing would interrupt a good nights sleep. 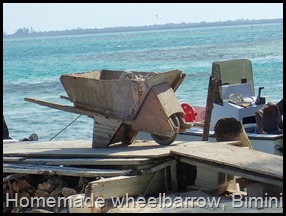 Sadly, next morning we trundled out of Bimini alone. Our friends on Blue Sky had received a distressing phone call the evening before. One of Donnie's best friends, Ken, had been badly injured in a skiing accident in Utah and was now in a coma. So instead of sailing east with us they sailed west back to Miami where they'd board a plane to Utah to stand vigil with Kens family. Our prayers went with them for Ken to make a speedy recovery. 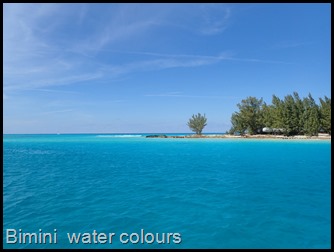 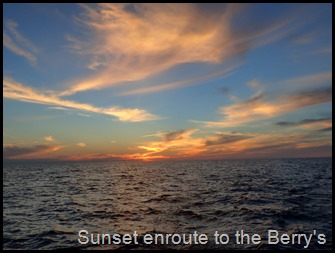 It seemed over the next week that we were being plagued by bad weather systems . The winds clocked around from every direction making us choose our anchorages carefully. We headed for the Berry Islands where we knew the bays and coves well. With two nights here and two nights there we felt we were constantly on the move. 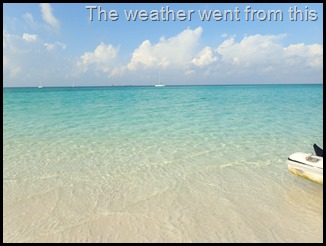 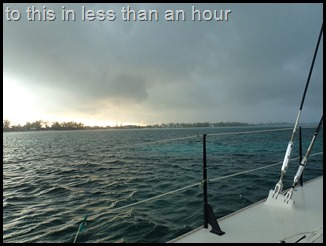 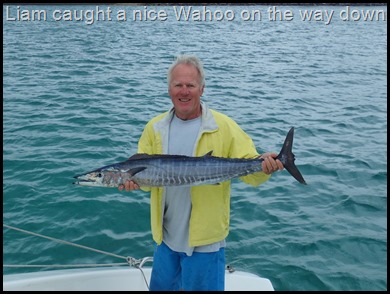 As we moved slowly south we decided  that the western end of Nassau Harbour would be the best place to drop the hook and avoid the next frontal system which was due to last three days. Surprisingly,  when we  arrived we were the only boat there. All the others who we shared previous anchorages with in the Berry's had run for cover to a marina. In the Bahamas that decision can be a very expensive one. 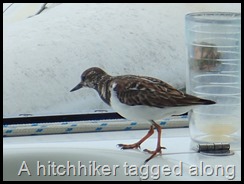 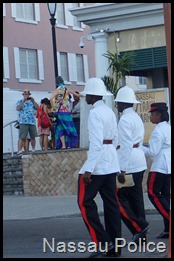 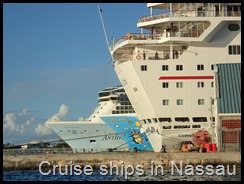 We heard many calls over the VHF radio requesting berthing rates from the various marinas in Nassau. One marina came back with a costing of six dollars per foot and that would not include power or water. Yikes! Needless to say a little later we heard the same boat calling up another marina. No doubt looking for something a bit more reasonable.

After the front blew itself out we pointed the bows east, unfurled the screecher and sailed over the shallow waters of the yellow banks arriving at the north anchorage of Ship Cay a few hours later.

The water colours over there are picture postcard perfect. The bay has a little beach and is surrounded by a good assortment of coral reefs and bommies, many of which support ecosystems for a variety of fish life. But more importantly, there are lobsters too! 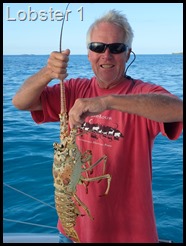 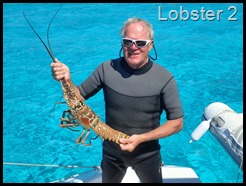 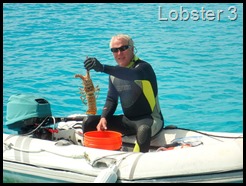 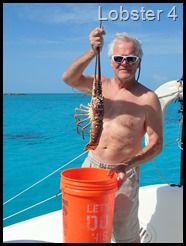 We stayed here for four peaceful days soaking up the serenity. By day we did boat chores, read books, snorkeled and caught our dinner from the seas bounty. By night, after watching the sky turn golden then dusky pink as the sun set over the horizon, we’d  fill our tummies with the “catch of the day” and settle in to watch a few episodes of our favorite TV series. Life doesn't get much better I must say. If only everyday was like that. 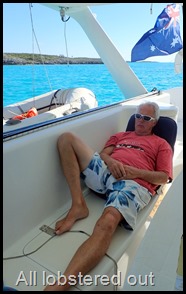 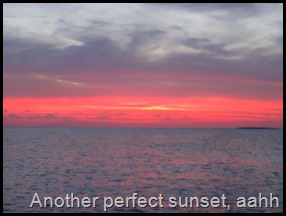 A note for foreign flagged cruisers following in our wake.

If your vessel’s cruising permit expires while your boat is still in US waters (ours did due to unexpected health issues while in our home country) the whole "moving the boat thing" gets a bit messy. You will not be issued another cruising permit unless you take the boat out of US waters and remain out for 15 days.

However we have been told, but this hasn't been verified by any one with authority, that you can surrender your permit to Customs if you are leaving the country via commercial means. Then upon your return to the US the permit will be reactivated for the remaining time left on the permit. Again this has not been verified so you'll need to check this out yourself with CBP ( Customs and Border Protection )and be sure you record the officer's name and badge number who gave you the information.

Ok, so if you didn't do either of the above and want to move your boat to another port you will have to go to your local CBP office and purchase a permit to proceed for $37. Then when you arrive at the next port front up in person to the CBP office and clear in . They will need your ships documents and clearance from your previous port which they will hold until your departure. Again there is a cost involved. Then when you go back to get your permit to proceed again you'll pay a $19 departure fee for your outward clearance papers and you'll then have 48 hrs to depart. Bottom line is that letting your cruising permit run out becomes a costly and time consuming pain in the arse.

So plan wisely and don't get caught out with an expired cruising permit while your boat is in US waters.

Email ThisBlogThis!Share to TwitterShare to FacebookShare to Pinterest
Labels: Bahamas 2017