When the winds Blow…..

Well it seems that here on GWTW we have adopted a national anthem.       No, it’s not the Australian one, Advance Australia Fair and it’s not the USA’s Star Spangled Banner either.

Ours was written by two brothers who live a little closer to home. They’re from  the land of the long-white-cloud and the song was a top hit from the NZ pop group Crowded House. Have you guessed the name yet? It’s actually quite a fitting  anthem for us given that the lyrics talk about the one big thing in our lives that dictates when and where we go. Yep it’s the “Weather with You” song! and the lyrics go like this “ Everywhere you go, you always take the weather with you …you take the weather, the weather with you” And on that note I reckon you already know what comes next in this post. 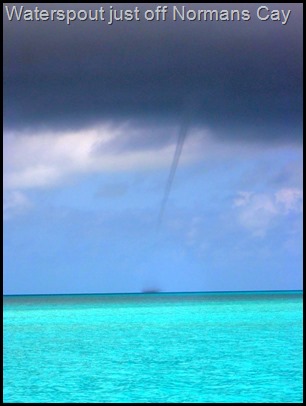 So here we are in the beautiful Bahamas, a place that most people think of as paradise, and it is on a nice day. But we have truly fallen out of favor with the weather gods this year. It’s slow going when the winds are howling and a howl’n they have been pretty much since we’ve arrived here. This past week has been no different. Since leaving Ship Cay at the top of the Exumas there has been a couple of very nasty fronts blow down from the northern USA. These fronts just reek havoc with every sailors’ plans, including ours.

The forecasters were so full of doom and gloom that they scared the pants off most of the boats and they scattered every which way. They literally upped anchor and headed for the hills, well  that’s metaphorically speaking of course, because as the Bahamas are so flat and devoid of hills, they actually headed to marinas. But we, being the brave or stupid souls that we be, decided to sit out three full days of 35-40 knot winds and squalls at Normans Cay, alone. That actually had its upside as we could put out as much anchor chain as we liked without anyone else getting their nickers in a knot over it. 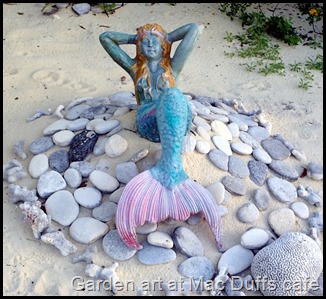 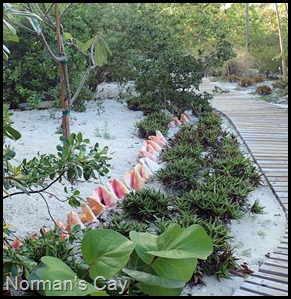 The wind in the rigging is a nice thing to hear, but not all day and night for three days. Still it gave us a chance to do chores, yep they are always lurking around the corner, fix things that weren’t previously broken but now were, read books and ponder both life and why things break for no given reason. So far we have no answer to the latter.

While we sat at Normans Cay we discovered purely by chance while fishing for a can of corn from the adjoining bilge, that our forward bilge under the starboard bed had sprung a leak. From where we don’t exactly know but suspect that the bilge pump outlet had been siphoning in water while we’d sailed down from the Berrys in rough seas. To our horror there was around 110 litres (25 gallons) of water in it when we opened it up to check. Liam spent an entire day replacing the existing bilge pump with a new kickass one and installing a very loud high water alarm. I spent all day washing off all the drowned contents of both bilges, drying them off and repacking them back into their former watery storage compartment and then moving roughly a year and a half of dry stores back onto the bed. We were both stuffed by the end of the night but very grateful that I needed that can of corn! 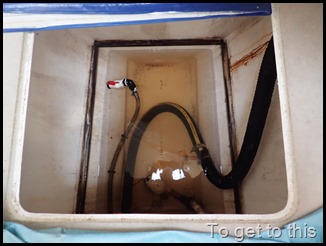 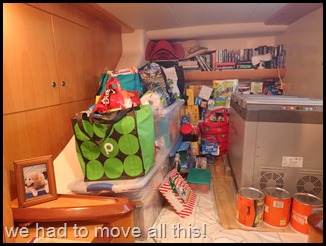 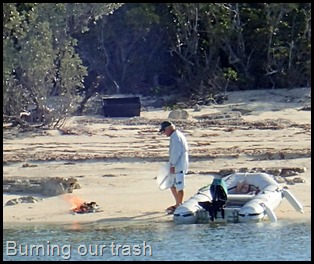 With a slight lull in the wind Liam was granted a shore pass and dingied to the beach to burn our paper and plastic trash. It’s amazing how much can accumulate in such a short time.

After three days the wind calmed down to a mere 25 – 30 knots. In need of a change of scenery we headed south towards Black Point, forty miles away. We were having a perfectly lovely sail, that is until we had to harden up and head more east than south. The seas got bigger and steeper, yuck, and the foredeck was constantly awash with waves breaking over the bows. Double yuck. Were we having fun? Not on your nelly!. 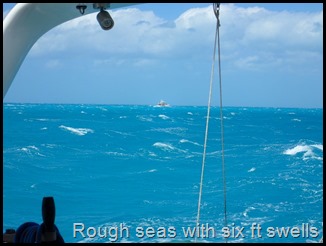 We endured five long hours of crashing and banging and finally pulled the pin. Abeam of Staniel Cay we motored in to join the brave band of fifty other yachts anchored there riding out the continuing strong winds. It was a good decision.

We found a snug spot in the prime location just off Big Major’s Spot aka Pig Beach. In recent weeks there has been a lot of press regarding the world famous swimming pigs. Seven had been found dead, the cause of which was unknown. One report blamed the boaters for giving them alcohol, something we definitely do not believe, others said it was from the ingestion of salt water but no one really knows. 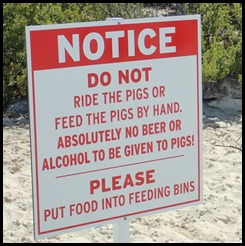 Anyway, we are pleased to report that this sounder of swine are still alive and kicking. We counted four big heffers and at least fourteen small to mid sized ones. And they all look perfectly fat, happy and healthy. Following the incident a warning sign has been placed on the beach re feeding them, not that the tour operators or tourists give a rats about it. Since our last visit in 2015 we noticed that food bins and a large tub for freshwater have also been placed there. During our stay this time construction of a shade cabana for the high profiled porcines has commenced. We’re guessing that the penny has finally dropped re the power of the tourist dollar when it comes to the value and  well being of this herd of trotting bacon. 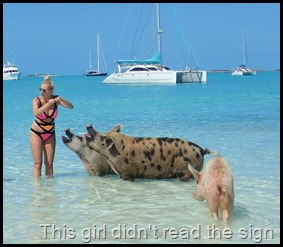 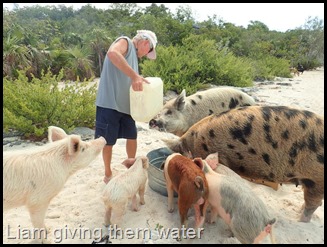 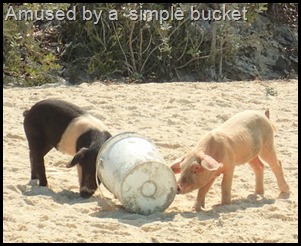 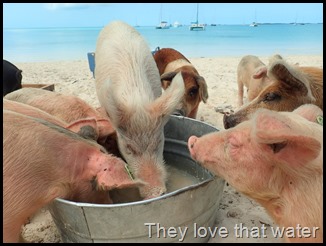 Once the winds calmed down we took to the dinghy out for a spot of lobster  hunting. These critters can be pretty elusive at times but Liam did manage to spot one and he in turn spotted us, which made for a hasty retreat on his part. Sadly for us he lives to tell the tale. On the way back home we did a drift snorkel through the cut between Big Majors and Fowl Cay. The current was hooting through at a couple of knots as we glided at speed over the fish and corals below. It was so much fun that we went back and did it three more times. Later that arvo Liam launched Shadow the drone  and we got some great ariel footage of the pigs, the boat and the surrounding waters. Just as soon as we get sorted the video will be added to this post, but in the meanwhile you’ll have to settle for some still shots. 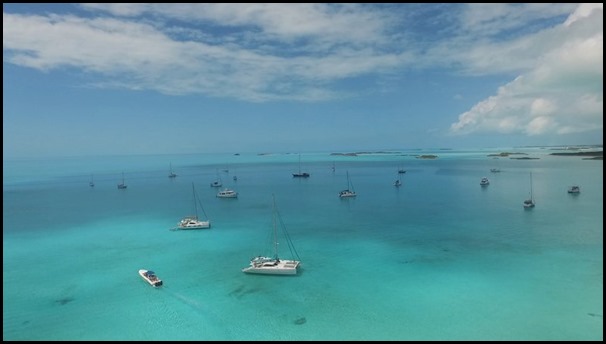 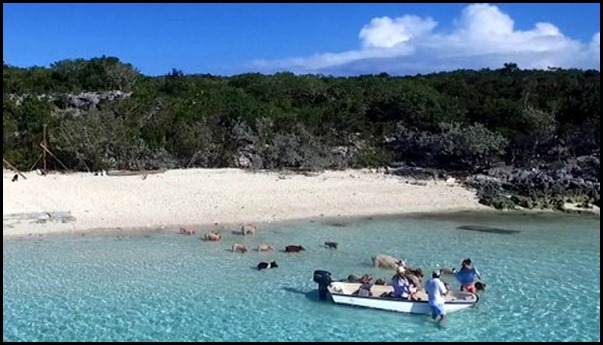 Now we are down at Black Point, a small community that is very boater oriented. Since being here I’ve had my haircut in the outdoor salon that has to have THE best view of any hair cutting establishment on the planet. We’ve once again seen the fabled “Green Flash”, that makes a total of four in the past 11 years. We’ve enjoyed a couple of great rum punches at Scorpios bar and grill and caught up with friends not seen since 2011.

Loads of washing have been done and Sunday morning music has been brought to us courtesy of the melodic tones of the church choir belting out songs of praise to the almighty. And tonight we’ll go ashore and feast on a traditional Bahamian buffet at Lorraine's Café. 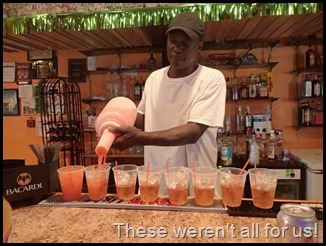 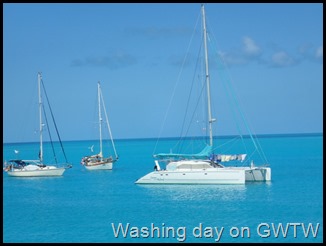 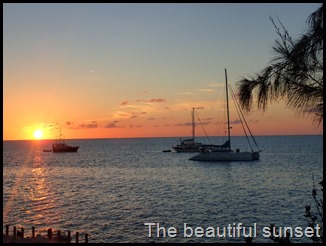 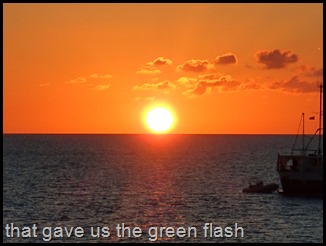 Tomorrow we’ll be making a change in direction as we set sail to a new destination in the out islands of the Bahamas, Cat Island. It’s some 50 miles east of here and with the forecast of south easterly winds we’re chomping at the bit to set the sails again!

Dinghy dock at the government dock, trash skip also at the shore end of the dock with donation box.

There are other eating places in town as well that we are yet to try.

Email ThisBlogThis!Share to TwitterShare to FacebookShare to Pinterest
Labels: Bahamas 2017