The Light at the end of the Tunnel 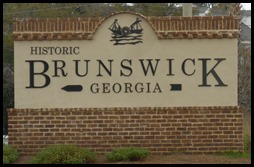 A couple of weeks before Christmas we strolled uptown to our favourite Brunswick coffee shop. Daddy Cates had been one of our haunts since arriving in town in July 2015. Yes, we’ve been here that long. Dee, the owner makes fantastic lattes, great breakfasts and a killer club sandwich. We’ve been there dozens of times and often see the same clientele. But this particular morning there was a new face sitting just across from us.

A lanky, personable fellow with a big southern drawl, obviously a local to the area, struck up a conversation. He introduced himself and for over an hour or more we exchanged stories. Edwin, one of the ships pilots for the Port of Brunswick, guides the giant ro/ro car carriers safely into and out of the port,no matter what the weather gods may throw at him. It is an occupation that requires one to be incredibly skillful. 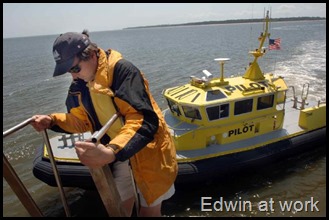 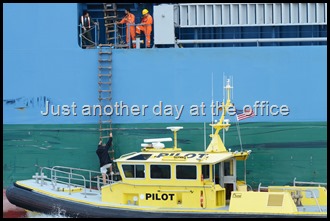 We were lucky enough to be able to experience his work first hand when he invited us to join him on the bridge of one of these monoliths one evening as he took her out to sea. The Wihelmsen line ship was bound for Baltimore , New York and across the Atlantic to Germany and has the capacity for carrying around 8,000 cars in her hold. We were given the ships tour and apart from the sumptuous smell of new car leather it was the engine room that just blew us away. That big thumping engine put our piddly Yanmar 75’s to shame.The pilot sea buoy is some 12 miles offshore and that’s where we’d be disembarking.  It was a cold, dark, windy night with a decent sea running. Under the watchful eye of Edwin while the the ship skipped along at 11 knots we gingerly climbed down the not-so-steady rope ladder to the bucking pilot boat nudged up along sideway below To say that the climb down got the adrenaline flowing and focused the mind is an understatement. What a hoot of a Saturday night that was!

Christmas morning dawned and somehow Santa had found us even though we weren’t in the land of palm trees. As is our tradition we started the day with a glass of bubbly followed by the opening  of a cache of prezzies. Our fun Canadian dock neighbours, Tina & Doug from S/V Amazed,  joined us a bit later for some Christmas snacks while our roast chicken and veg sizzled away in the oven. 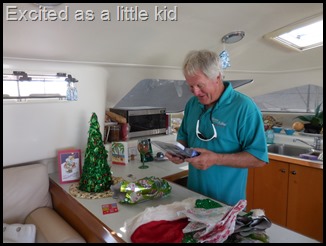 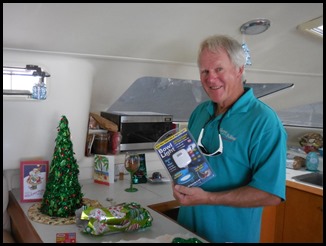 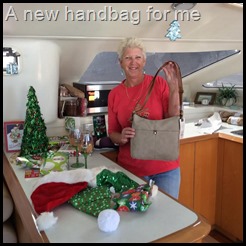 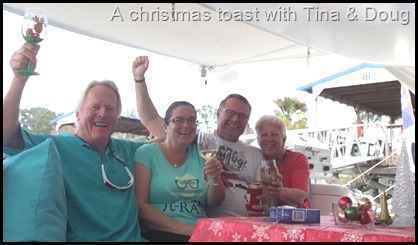 Tina and Doug headed up to the clubhouse to join in the festivities while we elected to stay home for our yummy chicken dinner. One can definitely over socialize in this marina. So we had the usual laid back Christmas on GWTW and it was he first one on record that we’d not taken a plunge over the side to cool off. 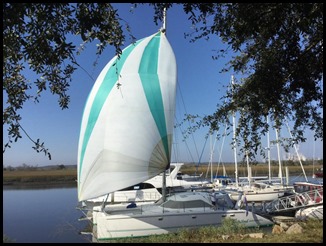 With Christmas over for another year our focus was now on getting ready to leave. There were still things to do and both our lists seemed to be endless. One morning when there was just a whisper of breeze we hoisted our spinnaker which had sat in its bag for over two years. We were worried that it would shred itself though lack of use but instead it set beautifully even though were still tied to the dock. That’s the closest we’ve been to sailing for a very  very long time. 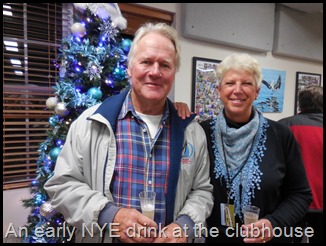 New Years Eve saw us with no plans. That was until the phone rang. Edwin,who I mentioned earlier invited us out to his house to celebrate the evening. He’d organized an oyster roast and bbq on his dock with neighborhood friends. We had a great night with a wonderful bunch of people. The southern hospitality never ceases to amaze us. Thanks  so much Edwin and Deborah. 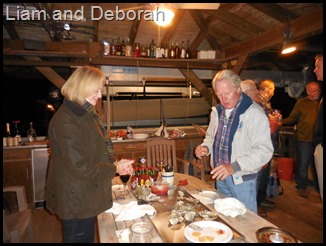 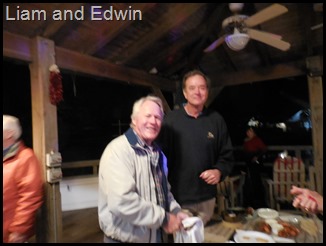 And there you have it, another year has flown by and we are still in Georgia. Keeping a watchful eye on the weather our leaving date kept getting pushed back. Cold fronts from the north rolled through every couple of days bringing cold winds and near freezing temps, which left a calling card of ice on our decks. It was starting to give us Deja Vu ‘Vu from this time last year.

Having only been in Brunswick like forever, at pretty much the11th hour we decided to have a large sun awning made up to cover the front of the boat. This took a little longer than we’d anticipated  and as luck would have it a rocket launch was scheduled to take off from Cape Canaveral in a few days time. Having missed seeing many over the years we decided to book a car and hotel and head south. It was an Atlas V rocket that is integral to detecting ballistic missile launches world wide.

The launch date was set for January 19th with a window of just 45 minutes to get airborne. Sadly, the launch was aborted after a stray aircraft drifted into Canaveral airspace just as the window was closing.  Rescheduled for the following night we rebooked our hotel. Second time lucky and right on time with a live feed on the phone giving us the countdown, the the launch pad glowed bright orange. The sound of the massive engines thrusting upwards reverberated through the night sky as Atlas V soared skywards, disappearing into space a few minutes later. It was a spectacular sight to see and yet another tick for the bucket list. 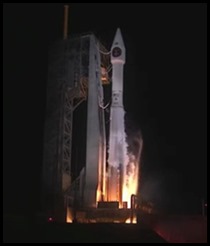 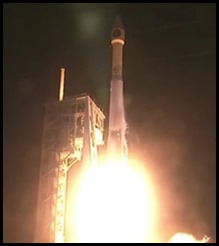 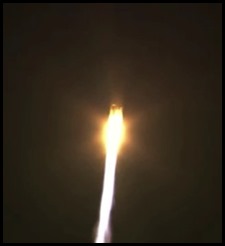 So there were to big bangs that day. As they say in racing horse parlance it was the daily double. The first was earlier in the day at 12 noon precisely. And when the clock stuck twelve president elect Donald J Trump  became the commander and chief of the United States of America. We watched it live on the TV from our hotel room. I guess what happens next is in the lap of the gods or the hand of fate. Take your pick but time will tell. 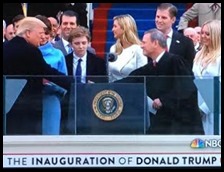 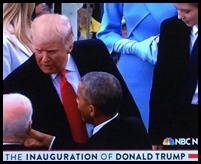 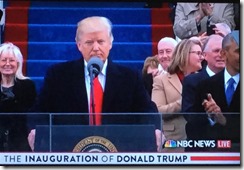 Driving back to Brunswick next day we caught up with two sets of friends in Jacksonville, Larry and Lena from S/V Hobo and Mark and Mary from S/V Mary Sol. It was great to see them but very sad to say our goodbyes after all these years. It was something we’d have to get used to over the coming days. 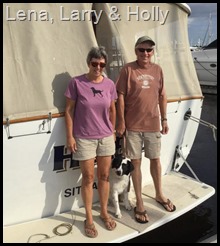 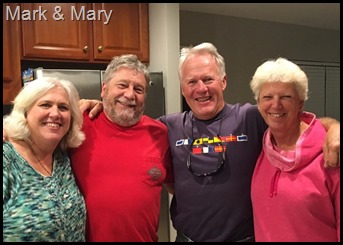 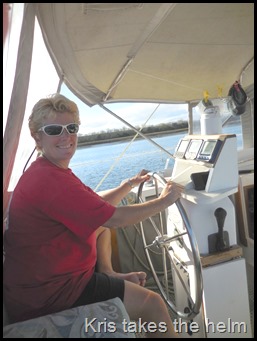 Liam, on and off for the past months, has been helping our friend Kris get her boat up to speed. Between the two of them they have tackled many jobs to get the boat to a level where she could actually move it from the dock and get S/V Water Frog out and sailing. After a few hands-on lessons of docking and maneuvering Kris finally took the helm and got out there. It was a real notch in her belt and we were glad we were able to be part of her monumental occasion. Good onya Kris!

Well saying goodbye is always hard but leaving day, January 27th, finally rocked around. An early morning load of last minute washing started the day which was consequently deposited into one of the clubhouse dryers along with a memo to self to pick it up before we left. Then it was off to Daddy Cates for one last coffee with friends. Next up was return the rental car and pick up some eggs and bread at the local Wal-Mart. Back to the marina  we rushed to pay one last bill and then a dash down to dock 13 to help Jim, Judy and their beautiful Golden Retriever Amber drop their dock lines. 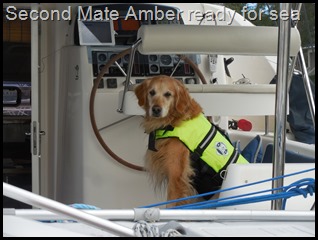 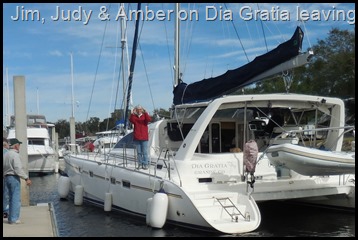 Then it was our turn. With tears flowing  and an air of sadness we dropped our lines and waved goodbye to our Brunswick home and family we’d come to love. Georgia will always be on our minds. We motored down the inlet to join Jim and Judy (S/V Dia Gratia) who we’d buddy boat with down to West Palm Beach in Florida. 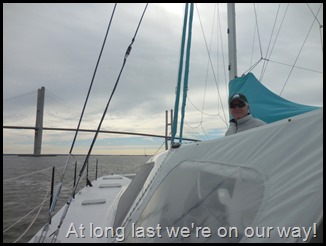 Well it seems that Brunswick had its clutches on us. You can check out but you can never leave. About an hour into our journey the penny dropped….the washing. Yep, the memo to self must have got washed away with the tears because it dawned on me that the washing was still in the dryer!! With an about turn back we went. The marina staff all had a good chuckle at that and Kris came to the rescue delivering my bag of very dry and neatly folded washing, thanks Kris, to the fuel dock for a very well executed snatch and grab operation.

Take two and we were outta there.

We’ve had an absolute ball in the 19 months that we spent at Brunswick Landing Marina and thoroughly recommend it as a place to linger a while. There are so many wonderful people that we’ve met over that time that its hard to name y’all. Some were only brief encounters while others  were friendships with those who’ve been there as long or longer than us.The memories will last a lifetime and we hope our paths cross again someday. 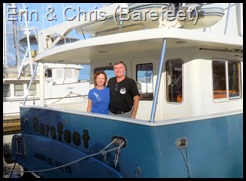 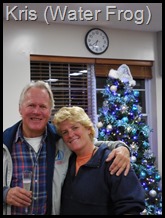 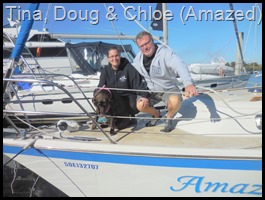 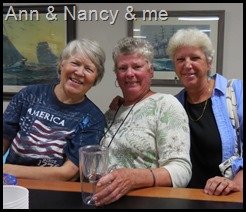 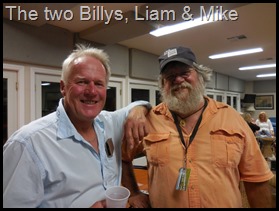 But for now new adventures await us. It’s time to go cruising!