Belize: Beautiful but not Breathtaking 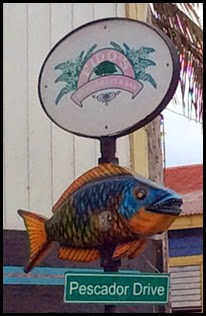 The combo of full main and screecher had us zipping along at speeds of 8-9 knots all day. Skimming over the flat water GWTW gobbled up the 63 miles from the Mexican border to San Pedro Belize in just under 9 hours. San Pedro, the first northern port of entry for Belize, is located on Ambergris Cay, a very touristy island where the main focus is all about scuba diving along the offshore reefs.

We’d heard from other cruisers that Belize was beautiful but a bit expensive in the fee department and they weren’t wrong. So we handed over the bucks to the officials and hoped that we’d like the place. After a little wander through the town we decided it was not for us, so later in the afternoon  we up anchored and sailed 12 miles further south to Caye Caulker which had a reputation of being quieter and much more laid back than San Pedro.

Swaying palm trees and sandy streets set the mood of this little island. With the tourist season winding down it was a very pleasant spot to spend a few days. We found a little place ashore for sundowners and along with friends from Munerra, another Aussie boat we’d met while in Mexico, we road-tested a couple of icy margaritas which I might say were excellent. 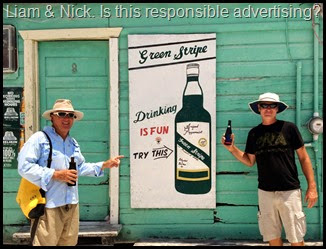 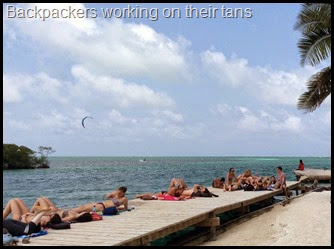 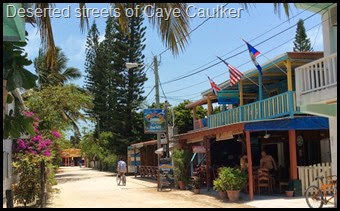 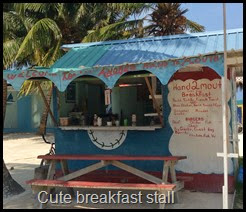 The wind howled for the next couple of days and we were effectively boat-bound. The seas on the ocean side of the island were too rough for snorkeling which was a bit of a shame, as we were itching to get out and explore the clear waters and the reefs we’d heard and read so much about.

Once the weather improved we pushed on to Colson Cay, a mangrove island with a snug anchorage surrounded by reefs. Our guide book said that there were three blue holes here that were teeming with all kinds of fish and that the snorkeling on the nearby reefs was superb. With such a great wrap it was time to hit the water. Well the blue turned out to be just collapsed sections of the sea bed with a distinct lack of the colour blue. And as for the “teeming fish”  and the superb snorkeling, Ha!

Maybe we just couldn’t find the right spot, but what we saw was very poor.  Just a few isolated coral heads that supported only a few fish. We did take a two mile dinghy ride to the outer reef but even out there the coral was mostly brown and again very few fish. It was disappointing to say the least.

Next day we had another lovely sail in the calm waters behind the reef down to tiny Tobacco Cay. And when I say tiny, that’s what it was. Barely five minutes and you’ve circumnavigated the place. Chocka- block full of palm trees, a couple of small homes and a small beachfront bar this was another really laid back spot that also touted excellent snorkeling. 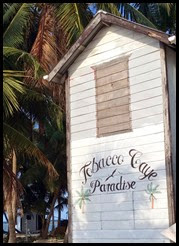 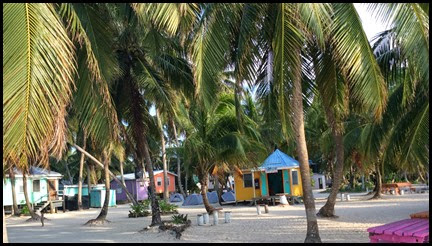 A charter cat came in while we were there and it’s 21 guests set up their flimsy tents on the sand under the palms. We hoped they wouldn’t get rained on during the night. So far we’d had no luck with our in-water activities, but we were determined to keep trying, so once again we loaded up the dinghy with our gear and headed over to the reef. This one was a bit better. There were plenty of fish, including stingrays and a large shark but the coral colours just weren’t there. Maybe the effects of global warming  and the odd hurricane had taken their toll on these reefs.

By the time we got back to GWTW the wind had come up and the waters were quite choppy.Our anchor was well dug in but the forecast was for stronger northerly winds over the coming days. We’d have to move on again tomorrow and find a more secure anchorage. 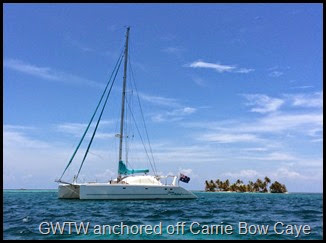 Twin Cays was the pick of the bunch when it came to hiding from the north winds but before we got there we stopped at Carrie Bow Caye for some more “ superb snorkeling”. What a load of hogwash!! The reef was as dead as a dodo and the only  decent size fish we saw was a lone barracuda. Within ten minutes of getting wet we were back on board wondering why we had come to Belize at all. Oh well, maybe we’d do better at finding a restaurant for lunch over on South Water Cay. Nope, it just wasn’t our day.The resort that housed the restaurant had no guests booked until the following day so there was no food to be had. Ok, enough was enough so off we went to Twin Cays for the night. This was yet another mangrove cay but proved to be an excellent choice for the coming weather conditions. In the cooling afternoon breeze it was lovely and tranquil, surrounded on all sides by low green bushes.

Slowly a few other boats filtered in, in anticipation of the strong overnight winds. With the day drawing to a close we adjourned to the foredeck, glass of vino in hand and listened to the dulcet tones of the music from the movie Out of Africa. It was short lived bliss. Along with the sunset came some uninvited guests, the fiesty little no-see-ums, and there were squadrons of the buggers. We retreated to the safety of the saloon as did a lot of the bugs, obviously we were just too tasty for them to leave. A night of itching and scratching made us vow we wouldn’t come back to this anchorage again.

As predicted the northerly winds came in during the night, so come daylight we took the opportunity of a fast downhill ride and headed off to the town of Placencia, thirty miles away. Anchoring just south of the sand spit off the town, you would not have known that just a few miles out it was blowing dogs off chains. Lining the waterfront were a few thatched roof buildings and some low key resorts, and it looked kind of funky. A fellow cruiser had called us up on the radio to let us know of a local band playing that night at the bar in front of us. Sounded  like that could be a goer. By 5pm there was a good roll up of holiday makers and cruisers and the three man “mature aged” band belted out all the type of tunes the crowd loved…our kind of music. It was a fun night of meeting new faces, dancing and singing. Next day we had a good walk around town. A shady timber footpath weaved it’s way past shops, souvenir stalls and brightly coloured elevated homes and eventually we decided to stop at the Barefoot beach bar for a bite to eat, catch up on the internet and chill for a bit while sipping some icy cold refreshments. As Liam says : man’s not a camel ! Along with Andrea and Nick off  Munerra we had  a nice relaxing, are there any other type, afternoon. The next day we would be going our separate ways.

It was now May 19th, only twelve days till the start of the hurricane season. We needed to get our butts into gear as there were still a couple more cays to stop at before turning around and heading back up to the USA. Tom Owens Cay got a good write up so we put our sights on there in the hope of finding that “ace” coral reef. The anchorage was pretty tight space-wise but with just one other boat there we fitted in nicely.The little cay was really cute with an equally cute dive resort on it. 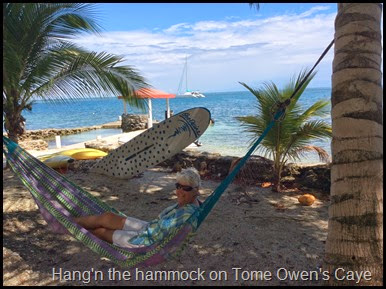 We’d been told by our French anchorage buddies that the caretaker and his dog were very friendly and that he needed some gasoline to start his generator. So Liam hopped in the dinghy and went ashore to get the whole story.The resort took about 10 guests and they were due to arrive tomorrow, but he needed the gasoline today to fire up his small generator and charge the resort’s batteries. Of course we obliged and gave him a few gallons. The dive boat would bring the replacement fuel for us tomorrow, he said. He was most thankful for our generosity and invited us to come ashore and use his internet if we needed. He also pointed us to the best snorkeling places and viola he was right. Finally we had found some good reefs with colourful purple fans, turquoise brain coral AND heaps of fish. Needless to say we stayed here a couple of days.

Nicholas and Lime Cayes were next on our list and we figured we could do both in the same day and then start to head north again. We had just dropped the anchor when the park rangers came over and asked us to go pay our park fees, $10 per day per person. Liam thought it a bit steep and considering we’d spent a  couple of days  at Tom Owen’s Caye and didn’t realise that was also part of the park, the bill would have come to $80US. Given the lack of good coral we seen  so far we packed up and left and headed over to  the mainland town of Punta Gorda.

Over the last week Liam had been tabling, (aka strongly hinting) at the idea of spending the hurricane season in the Rio Dulce, Guatemala but I wasn’t buying into that at all. Eventually worn down by this discussion we finally came to a compromise. We’d clear out of Belize at Punta Gorda and head down to the Rio for a look see with the idea of a quick haul-out out to antifoul and then head back up to the USA. Other friends who were already in the Rio assured us that we would be able to get the bottom paint we needed and have the job done and dusted in just a few days. We emailed back and forth to the boatyard and was told yes, we could be hauled but not’ till the end of the week. Ok, we’d give it a go. After all, the Rio Dulce gets rave reviews and might as well have a look as it was just 16 miles further on. So with that, it was goodbye Belize, hello Guatemala.

Did we enjoy Belize? I’d have to say it was OK but not fabulous.. Everyones’ experiences are different but for us and from what we saw  it just didn’t live up to it’s reputation. Maybe it will be better next time we visit.

Cruising Info : Formalities. San Pedro: Customs, Immigration and Agriculture are opposite the airport above the Scotia Bank. Port Captain is further out of town, we couldn’t find him but paid the fee on checkout in Punta Gorda. Fees: Immigration $B50 inc 30 day visa, Customs $B50, Agriculture $B70. Check-out : Punta Gorda, all officials are located in the ferry terminal: Immigration $B37.50 per person, Port Captain $B100 for first day and $B5 for each day there after. Park Fees, varies from $B5-20 per person per day depending which park you are in, there are many marine parks, so choose wisely!

Guide Books : Belize and Mexico’s Caribbean Coast by Cpt Freya Rauscher 3rd edition. Excellent charts, waypoints and routes. Some land based info needs an update and make up your own mind about the snorkeling sites.

Email ThisBlogThis!Share to TwitterShare to FacebookShare to Pinterest
Labels: Belize 2014