Guatemala : Relaxing in the Rio Dulce

”Well who would have thought” ! That’s what we said to each while motoring up the Rio Dulce river from the sea entrance at the town of Livingston. Not long ago and I mean not long ago, neither of us had ever contemplated coming to this Central American country, let alone knew where it actually was. But that’s the great thing about this sailing life we lead, plans can change in the blink of an eye and not always for the worst.

As I mentioned in the previous posting, we were coming here for a just a couple of reasons. (a) it was only 16 miles further on from where we had been in Belize, (b) we’d been told that it was a cheap place to have the boat hauled-out and antifouled and (c) we could be done and dusted and on our way back to the USA in just under two weeks. 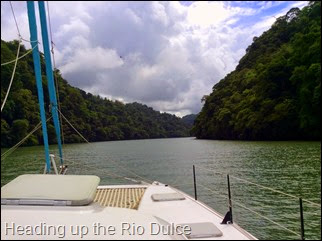 The 20 mile motor up the river was absolutely spectacular, in particular the initial half dozen miles. Once around the first bend a whole new world opened up in front of our eyes. Three hundred foot cliffs shrouded in dense vegetation of every imaginable shade of green stimulated our senses. The river and it’s surrounds were alive.The crisp smell of mother earth, the sweet song of unseen birds, the cascading wave of cicadas’ voices and at times the sheer sounds of jungle silence and tranquility had us totally spellbound.

Maya Indian fishermen paddled their dug-out canoes under the shade of overhanging trees and  many traditional thatch roofed houses lined the river edges. The beauty and lushness of Guatemala was something that we hadn’t seen since cruising Borneo back in 2006. 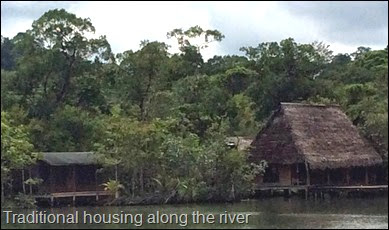 The river wound it’s way further inland opening up to El Golfete, a large lake backed by the imposing 1200 ft Mica mountains. As the lake spread further ahead masses of colourful waterliles grew along the shoreline and fisherman, again in dugouts, cast their nets. Before long the signs of civilization became more apparent.

The Rio Dulce is well known among the cruising fraternity as an excellent hurricane hole. Boasting fourteen marinas and three haul-out yards, it is a very popular spot to spend the season. Just how popular it was we had no idea until we neared the end of the lake and the marinas, complete with small forests of masts, began to appear. These are not the glitzy marinas that you would find in Europe or the US, most are family-run affairs. Some with swimming pools and shore-side accommodation, others with just a small restaurant and a few docks. It’s all very laid back.

We were headed to Nana Juan Marina, which  has a boatyard attached. This marina and yard is a haven for large catamarans. For haul-outs, the smaller cats seem to use Ram Marine, the next yard along. Within a day we’d spoken to our yards’ manager, a pony-tailed Frenchman named Jean Claude and organized a tentative date to be pulled out. Now all we needed was to buy a few tins of antifoul, paint trays and rollers and we’d be good to go. 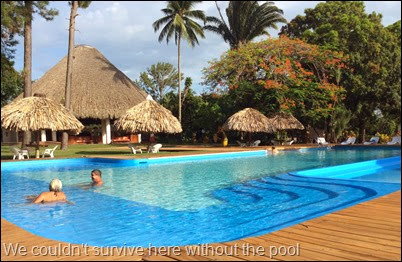 There were a couple of other Aussie boats at Nana Juan, all of whom we’d met sailing the Caribbean over the past few years. There’s nothing like a bunch of Aussies to liven things up. As three of the boats were already tied up in the marina they made us honoury guests and invited to make use of the marina facilities ie the Wi Fi and the beautiful pool. With the marina facing west, it was a given that sundowners by the pool became a regular event. The rest of the pool set were mainly French with a dusting of Germans along with a whole gaggle of  cruising kids.

The first three weeks we spent at anchor, along with a growing number of other boats, just off the marina and the town of Fonteras just a five minute dinghy ride away. By the end of the second week our plans for the hurricane season began to change. Guatemala was growing on us. Despite the incredibly hot and humid weather, the place has a nice cozy feel to it. We did have quite a few  heated discussions as to whether we should stay put here or head back to the USA, as was the original plan and the one that I was in favour of.

However time was marching on and the weather patterns were already beginning to change. If we went back up to Jacksonville in Florida it would mean a 1200 mile passage and taking into account bad weather along the way the trip could take as long as two weeks or more. Finally we came to a compromise. I agreed to stay in the Rio provided we could get a berth at Nana Juana marina, the draw card being their wonderful pool. Liam spoke to the marina manager and after a couple of days Jean Claude came back to us with a yes. That made Liam a very happy chappy and strangely enough it was ditto for me.

So far it has turned out to be a good decision. We have saved a goodly amount of dollars by staying here. The marina in Florida would have cost over $ 900 per month where as down here it is only $250. Another plus are the labour charges, $26 per hour v’s $95 in the States. The cost of living here is also extremely affordable. 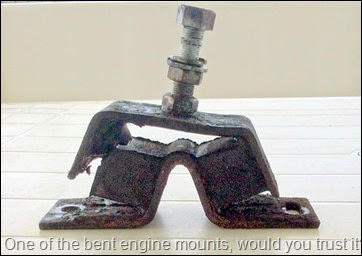 Meanwhile, it’s been a bad  few weeks for breakages and there’s been some real dooseies. On the urgent “must fix it” list, we’ve been able to have our engine parts air freighted in. The mounts ( feet) that we broke on the port engine back in Cuba have been replaced and the coolant leak in that engine also diagnosed and fixed.

A replacement  Vetus muffler and exhaust hose on the starboard engine, which had a terminal meltdown last week due to the sea cock inadvertently being left in the closed position after servicing a strainer filter, have also been replaced. That was achieved after a lot of cussing, blood, sweat and tears from you know who, well maybe not the  tears bit but definitely the cussing, blood and sweat part. 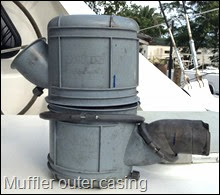 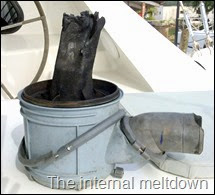 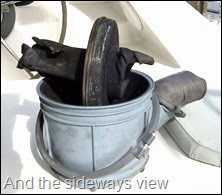 The only thing left on the list now is to buy a replacement hot water tank that blew it’s water hoses to kingdom come after the pressure relief valve failed.

Liam, who was in the engine bay at the time, had his face only inches away from the hose when it blew and it went off like a bomb. It scared the bejesus out of me and I was sure I’d find him dead. The whole boat filled with thick steam with in seconds and I couldn’t see him or hear him yelling because of the steam exploding out through the now F*!%ed hose. Luckily where the hose failed the pressure sent the steam skywards instead of sideways. Had that not been the case he would now be  in a hospital somewhere in the USA recovering from 3rd degree burns to his head, shoulders, chest and back. So, as you can see it’s been a  busy couple of weeks here in Guatemala, with no time for sightseeing just yet. 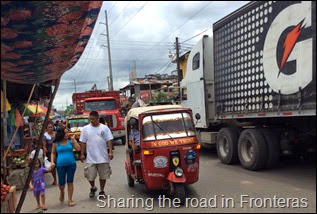 We have been into Fronteras town several times and it’s a very bustling place.The main street has no footpaths so shoppers get to share the road with tankers, cattle trucks, buses and whatever else trundles down the main drag. We caught a local minivan bus to Morales which is the next town along, and it too was the same. Shops selling everything from  horse saddles to fresh meats front straight onto the busy streets, not a footpath within cooee. Maybe that’s just how it is in Guatemala. 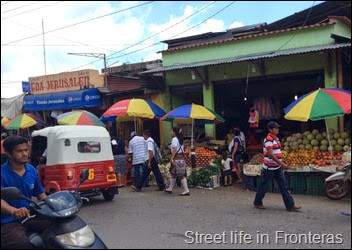 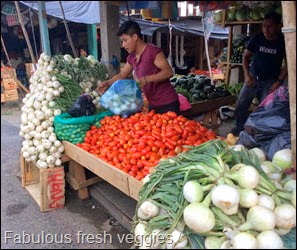 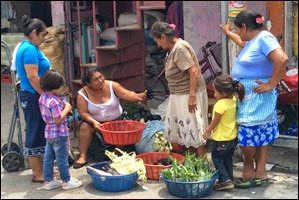 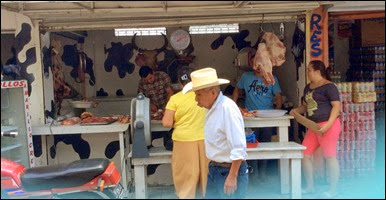 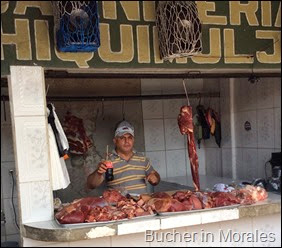 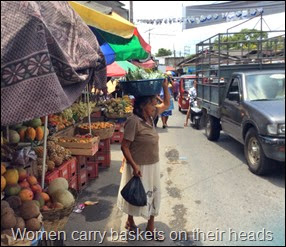 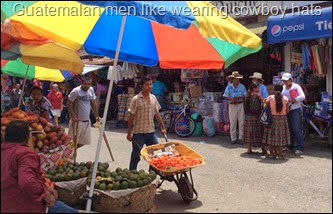 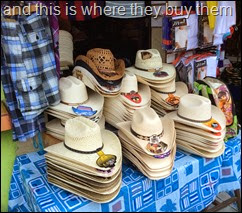 A few days ago we moved into our berth and have quickly slipped into the luxury of marina life. Each morning we head up to the pool for a good workout of laps.  I manage fifty to sixty, while Liam on the other hand has so far clocked up a staggering four. Sometimes he goes all out and does six! That aside, we are also enjoying endless free water and being connected to shore power to run our oven and our lifesaving  air conditioner. There’s quite a good social scene  here as well. The marinas take turns at hosting movie nights, dominos, and trivia quizzes.and they all offer various lunch and dinner specials. With everything that’s going on we sure won’t have time to get bored.

A little inland travel  is in the pipeline for the coming week, so keep an eye out for the next blog post. But until then it’s adios amigos!