The city of Ponce is often referred to as the pearl of the south. Founded by Juan Ponce de Leon y Loayza in 1682, it is the second largest city on the island after the capital San Juan. The guide books describe the city as having a laid back atmosphere and  some unique architecture. As our car was due back at the rental office by noon and Liam wasn’t that interested in coming with me to have a look around Ponce, I hit the road early and zipped over for a quick gander.  With limited time I focused on seeing the buildings surrounding the main square, the Plaza las Delicias. 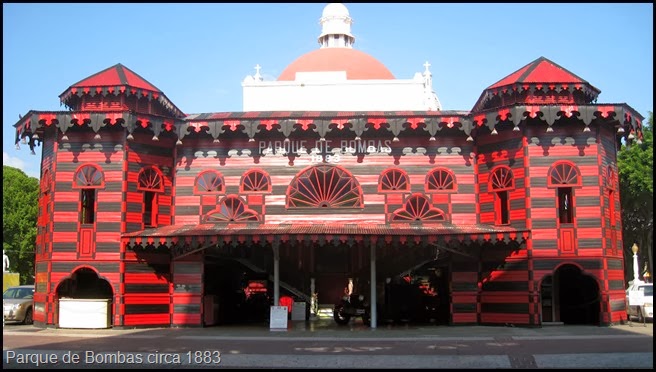 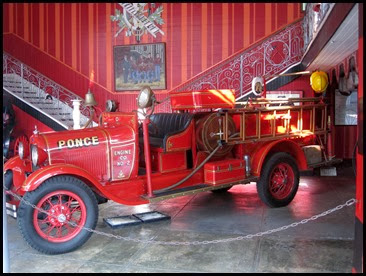 Standing out like doggies was the Parque de Bombas. This was a former fire house and is painted with distinctive red and black stripes and is the symbol of the city. Unfortunately I had arrived too early as it wasn’t opening for another couple of hours so I didn’t get to have a look inside.The building has now been turned into a museum with an exhibition on the history of the fire fighters of Ponce. 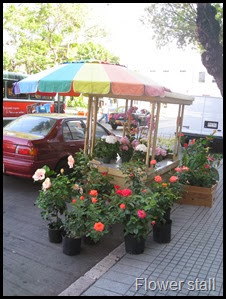 The park in the main square was quiet except for a group of fitness fanatics who had just finished their workout and were enjoying a communal breakfast under the trees. The thought crossed my mind to ask if I could join them as I was a tad peckish, but I kept on walking. Just around the next corner I spotted a food cart with a line up of people, always a sign of good local food. In my very broken Spanish I got the gist that the man was selling hot pork rolls and coffee. I couldn’t resist the urge to indulge and boy was it yummy.

Meanwhile back on my walking tour the municipal workers were tending to the public gardens. I stopped to ask one of the gardeners why the Fountain of Lions had no water and he just shrugged his shoulders and said “ no water”.  I guess it must have been broken. So I have a photo of the famous fountain, sans the wet stuff below on the left, and one of how it’s supposed to look courtesy of a friends blog site. 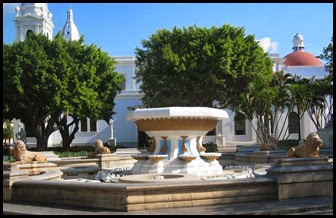 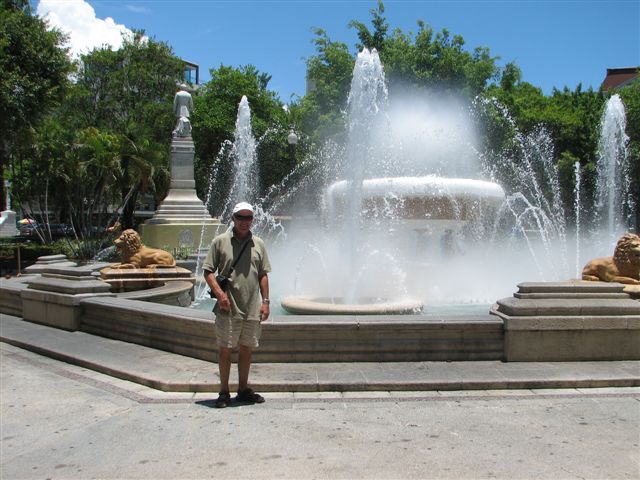 The Ponce Cathedral  was my next stop. Also known as the Cathedral of Our Lady of Guadalupe, it dates back to 1670 and has been damaged several times by fires and earthquakes The exterior was a beautiful light blue colour with matching colours on the ceiling inside.The sun was still a bit low to get a good shot of the outside which was a shame. Mass had just finished and there were still a few good Catholics on their knees saying their morning prayers, so I didn’t hang around too long. 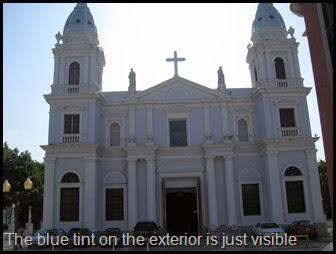 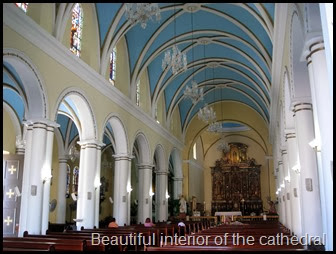 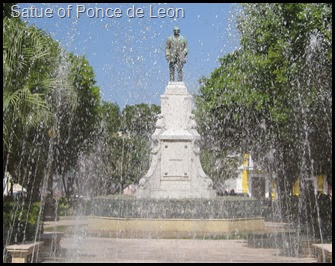 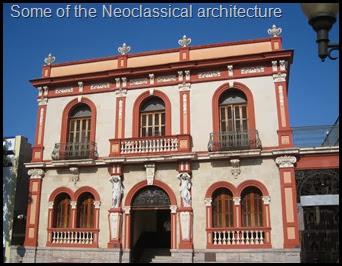 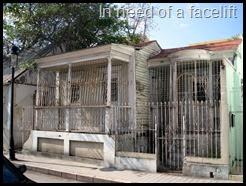 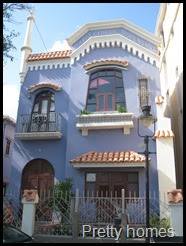 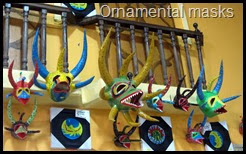 After walking for another hour or so and snapping off a few more photos, it was time to head back to GWTW before the morning traffic became too hectic.

On the move again

Five days in Salinas  was long enough and it was time to move GWTW further west along the coast. With a good breeze blowing, setting the kite gave us a good fast ride until the wind angle became too shy and we switched down to our screecher. There are plenty of good anchorages along the south coast of Puerto Rico so we opted for a snorkel and lunch stop at Caja de Muertos. Also called Coffin  Island due to its shape, it is an uninhabited island with a century old lighthouse. We were planning to stop at Gilligan's Island as well but as the wind was starting to pick up we kept sailing ‘till we reached Cayo de Cana Gorda / Pt Jacinta for the night, anchoring just off a rather nice looking resort. Liam and Ross did a little lobster hunting in the afternoon but they found no booty to bring home. Pity really as a lobster dinner would have been nice. Next day we continued west stopping at the sleepy little town of La Parguera for the evening. 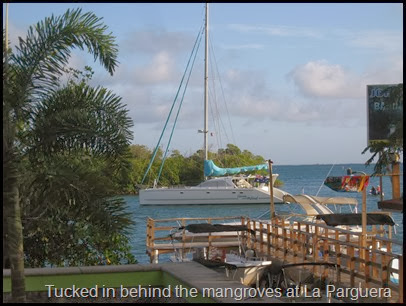 It had been a rather uncomfortable ride with white caps all around and we were glad when we dropped the anchor right off the town in the protection of a mangrove island. As a treat we had dinner in town, chowing down on a Puerto Rican  delicacy called Mofongo. It is a mixture of fried and ground up plantains, which are a kind of banana. It was tasty, just not sure if we’ll be rushing back for anymore.

The town was pretty small but the locals were all very friendly. A walk around town only took 15 minutes and I spotted a very colourful trailer park. Equally as colourful were the homes built on stilts out over the water’s edge. 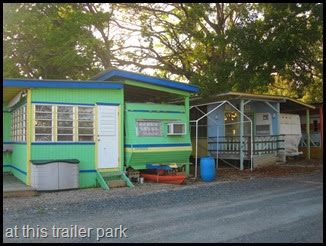 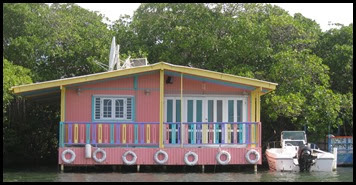 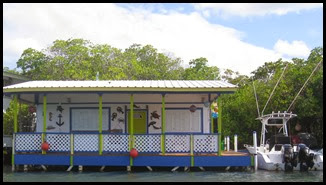 Our last anchorage in Puerto Rico was on the west coast at the town of Boqueron. It was yet another sleepy town but it did have a lovely long crescent beach and a well protected anchorage and good holding in 12ft of sand. Hiring a taxi for the day we did a parts run up to the larger town of Mayaguez where a much needed  parcel of pumps was waiting for us at the post office 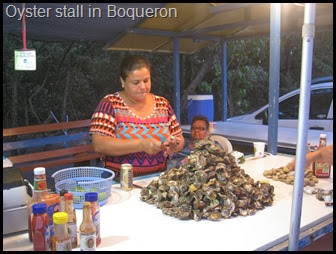 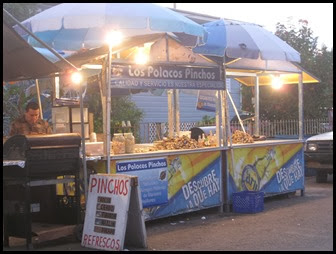 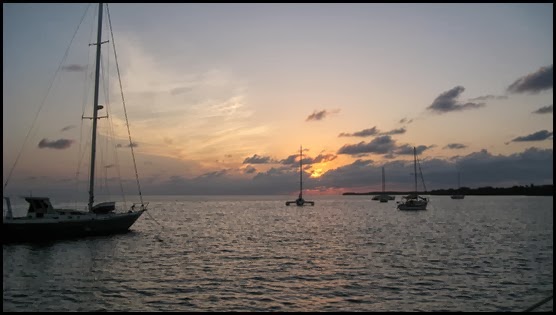