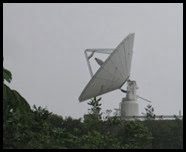 Having a bit of a passion for all things to do with space, day two of our inland travel was earmarked to visit the giant radio telescope at the Arecibo Observatory, roughly a three hour drive from Salinas on winding secondary roads. 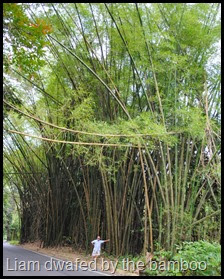 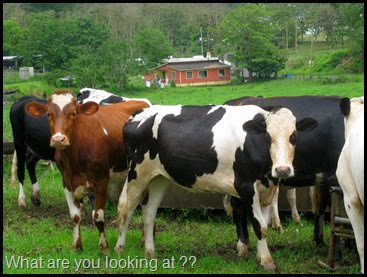 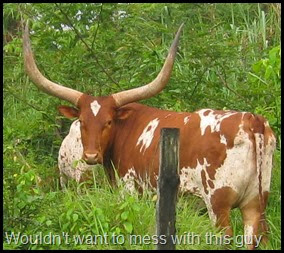 We drove through some very steep terrain at times as well as some huge bamboo forests and lush dairy farmland. The observatory is located just to the north and a little west of the centre of the island in an area known for its many karst sinkholes. There are a number of reasons why the telescope was built in Puerto Rico, the main one being that to study distant stars in both the northern and southern hemispheres it needed to be located as close to the equator as possible, which in this case is latitude18 degrees north. Another requirement was for it to be built as far as possible away from any large populated areas as the radio waves that float around big cities would interfere with the telescopes '”hearing ability”. It was also important to keep the observatory and telescope on American soil due to the fact that it is sometimes used by the US military.

The Nitty Gritty of it all

Before we arrived at the site we read the blurb on it in the Lonely Planet, but even having done our homework we were gob-smacked with the enormity of the facility. Tucked away in the hills, it sits inside a natural depression left by a karst sinkhole, it almost seems as though mother nature had intended the spot to be used for this huge structure.

The visitor centre has heaps of interactive space related stuff if you are that way inclined, but for us the real bonus was that we arrived just in time to hear one of the guides give their 30 minute talk about workings and importance of the telescope.

As my memory doesn’t serve me so well on all the statistics  most of the following info was trawled from the internet.

Construction began in 1960 and was completed by 1963. The reflector or “dish” is big and we’re talking really big. Spanning 1000 ft in diameter and measuring 167 ft deep, it covers an area of twenty acres. The surface of the dish is made up of just under 40,000 perforated aluminum panels each measuring 3 ft by 6 ft and is supported by a network of steel cables strung across the karst sinkhole beneath. In order to carry out repairs to the surface of the dish the maintenance guys have to wear a specially made type of wide snow shoes. These spread the load of their weight as they walk across the panels and they don’t get the job if they weigh more than 60 kilos. Oh and for all you science buffs out there, the dish is a spherical reflector, not a parabolic one. 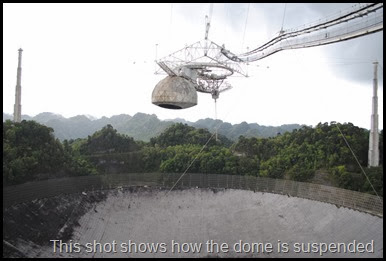 Suspended 450 ft above the reflector is a 900 ton platform hanging mid air on 18 cables which are attached to three reinforced concrete towers.  Because of the terrain one tower is 365 ft high and the other two are 265 ft. All three tower tops are at the same height. Each tower is back - guyed to ground anchors with seven 3.25 inch diameter steel cables.  As an extra backup, another set of cables run from each corner of the platform to large concrete blocks under the reflector. They sure as hell didn’t want this baby to move! 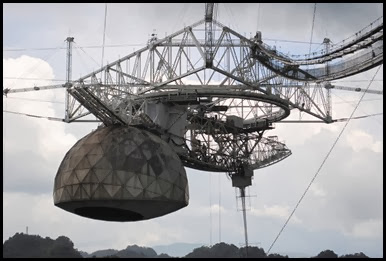 Below the triangular frame on the suspended platform is a circular track on which the 325ft bow shaped azimuth arm turns. On the curved part of the track is a carriage house and a semi circular Gregorian dome containing all the receiving equipment which can be positioned up to twenty degrees from the vertical.

The giant size of the reflector is what makes Arecibo so important to the scientific world. It is the largest curved focusing antenna on the planet which makes it the world’s most sensitive radio telescope. While we were listening to our guide the huge suspended arm above the reflector began to move, repositioning the Gregorian dome. We were told that this definitely wasn’t a daily occurrence and  that we were very lucky to see it happen.

A  little bit of trivia

*The telescope has  featured in many Hollywood movie and television programs including the 007 film Goldeneye and the movie Contact starring Jodie Foster.

*Apart from looking for distant stars and galaxies it is also used to collect data for the SETI (Search for Extraterrestrial Intelligence) program.To date there has been no response to the signals sent out.

*On April 7th 1964, shortly after the telescope began operations it was determined  that the rotation rate of the planet Mercury was not 88 days as previously thought but in fact 59 days.

*Most of the major discoveries have been to do with pulsars, a fast rotating neutron star that emits a beam of electromagnetic radiation. Since the beam can only be seen when it is directed toward earth the star appears to pulse on and off. Pulsars have player an important role in determining the age, size and composition of the universe.

*The first planets outside of our solar system were discovered using this telescope. 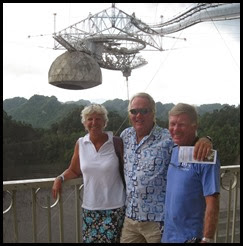 By late afternoon the day had turned out warm and sunny, quite a contrast to the overcast morning. On on our way back to GWTW we decided to make a quick lunch stop at the La Guancha Boardwalk  just south of the city of Ponce. 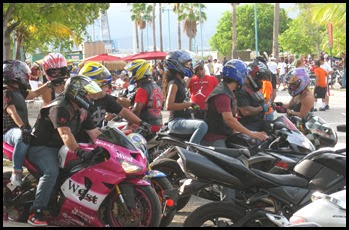 Judging from the number of people there it’s  a popular waterfront  place on the weekends attracting a cross section of Puerto Ricans, from families to  boy racers on their motor cycles.

Although our lunch was nothing to rave about, maybe we should have brushed up a bit more on our spanish before ordering,  we enjoyed the vibe of the place and  sat and watched the world go by for a while.It was a very casual scene. Boats rocked gently on their moorings out in the bay and the outdoor cafes we full of patrons. A local band entertained the crowds and some couldn’t resist getting up to dance to the beat. 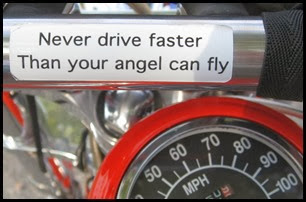 Driving back  home to Salinas nearly every town we passed  through had turned into a party venue. Happy people  on the streets socialised and swayed to the up beat music that is so part and parcel of the Puerto Rican culture. It really made us want to stop and join in but the day was nearly done, and so were we.