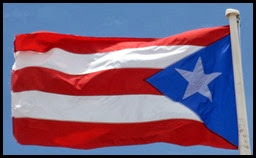 The forty three mile run under screecher, that’s our big front sail, had us anchoring in the bath-tub-flat waters of Bahai Salinas around 1730.This bay, located on the south coast of the island, is about as good as it gets when it comes to protected anchorages being surrounded by mangroves with a good muddy bottom to bury the anchor. It would be bullet proof in just about any weather. The bay is very large and would hold at least 100 boats. 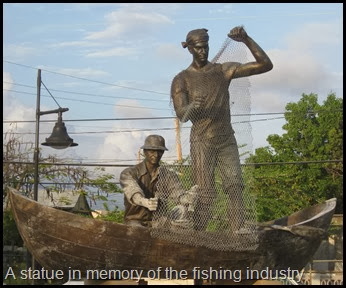 Arriving here at the end of the season meant there was plenty of room for us, though in the peak cruising times it would be rather busy I reckon. We had planned on hiring a car for a little inland travel and felt quite comfortable leaving the boat  while we shot off for a couple of day trips. The friendly staff at the Salinas Yacht Club were more than helpful in giving us directions to supermarkets etc as well as phone numbers to hire the car.The town of Salinas and its surrounding area, which has a history of being a fishing village, is a easy 40 minute dead-flat walk away and has all the usual stuff that we cruisers need. Just up  the road from the marina there were a couple of small restaurants and bars where some of the cruisers gather for sundowners and a cheap meal on the weekends. The marina itself also had a a little restaurant , laundry and wi fi. There was also a  swimming pool that was available for use for a weekly fee of about $70 which was a shame as we would have loved to have had a dip to cool off.

Once we organised the car our first trip saw us heading across the mountainous interior to the capital San Juan on the north side of the island. The road system throughout Puerto Rico is every bit as good as mainland USA. It makes for fast travel from A to B, which is great when you have a lot of miles to cover. The Old Town of San Juan was once a walled city and today is a vibrant place full of narrow cobblestoned streets lined with colourful terrace houses from a bygone era.

Our main focus this visit was to explore the interior of the two forts, Castillo San Filipe del Morro (El Morro), and San Cristobel which on our two previous trips to Puerto Rico we’d not seen. 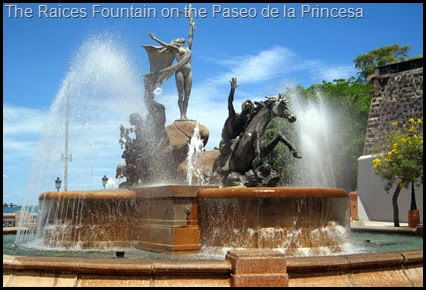 The Paseo del Morro is a shaded recreational pathway that skirts San Juan Bay beneath the historic city walls. It meanders from the harbour side to the main entrance past waterfalls, statues, Government House and then across a large expanse of public lawn which is very popular with picnickers, food vendors and kite flyers. 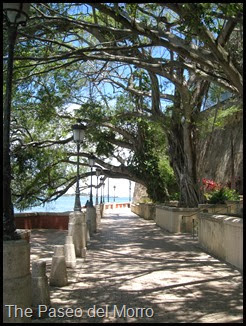 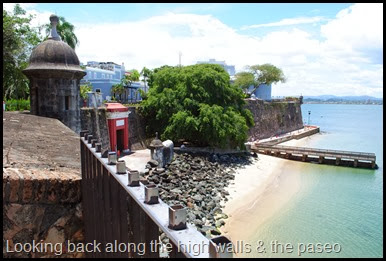 El Morro, the main fort, dates back to 1539 and sits imposingly on the headland overlooking San Juan harbour. It is said to be the oldest Spanish fort in the New World and was declared a UNESCO World Heritage site in 1983. The National Park Service maintains the fort and has excellent exhibits, signage, videos and, if you arrive at the tight time, ranger tours for a a more personal take on its history. The walls of the fort  in some places are 15ft thick and stand 140ft tall, talk about imposing for any wannabe invaders! It took nearly 200 years to build and repelled many sea borne attacks by the Dutch, British and even the US military during the Spanish American war in 1898. The lighthouse on the 6th floor has been operational since 1846 and is the island’s oldest lighthouse, which is still in use today.

Exploring the fort from it’s bowels to the top of it’s ramparts was very interesting. With nooks and crannies at every turn there was a wealth of information to read and the view from the top looked out over the city, the harbour and in the distance the central mountains and rainforest of El Yunque. We spent about 4 hours wondering around and soaking up the history of the place. 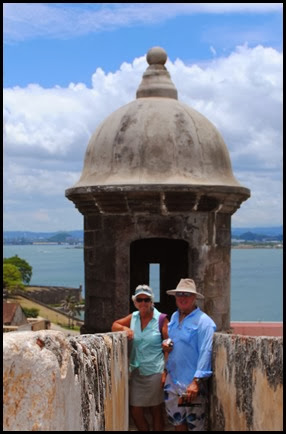 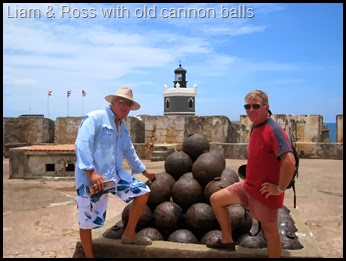 The camera, or maybe more to the point the person    behind the lens, couldn’t give El Morro the justice it deserved . It was just too expansive to capture everything that I wanted to put on the blog. 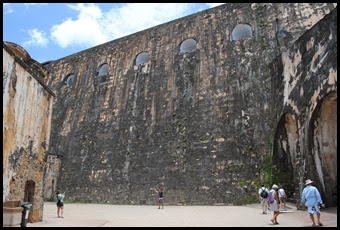 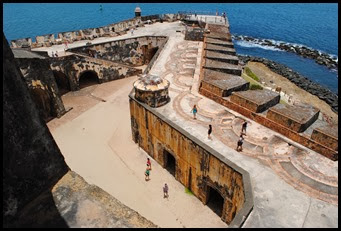 Having thrown a shoe, Liam opted out of the sightseeing and adjourned to a quiet café for a spell. 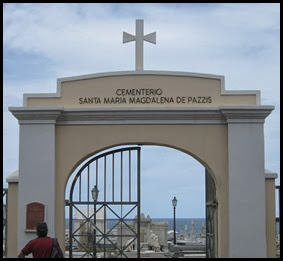 Ross and I  continued on to the Cemetery Santa Maria Magdalena de Pazzis which occupies a prime piece of real estate between the forts of El Morro and San Cristobel. It is the final resting place of  many prominent natives and residents of San Juan.  The cemetery commands one of the best views of the Atlantic ocean on this side of the city. Dating back to 1863 it pays  tribute to those who have passed on to the next world with hundreds of elaborate marble and granite headstones. True works of art from stone masons who are also long gone. 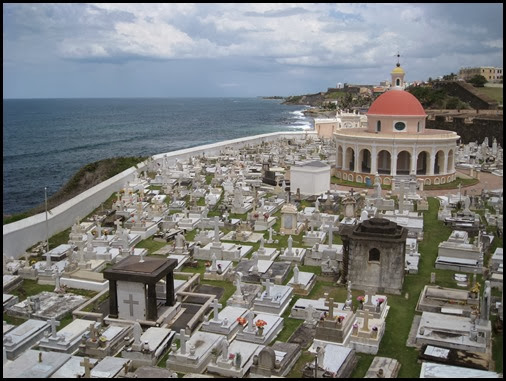 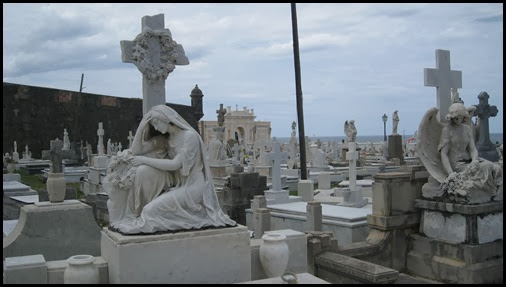 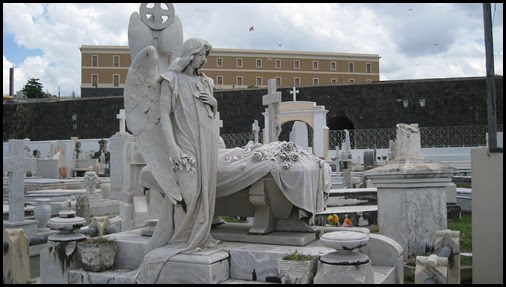 The Castillo de San Cristobal, a little further along from the cemetery, was the next attraction on our list. This fort was built to protect San Juan against land based attacks. It is the biggest fortification built by the Spanish in America. Construction  began in 1634 and took 150 years.

Inside the fort were many exhibitions depicting scenes of the lifestyles of those who called the place home along with some of the original cannons and a replica of the Santa Maria, which was Christopher Columbus’s ship. On the walls of the dungeon was an etched drawing of a square rigger which was said to have been done by an inmate while awaiting execution. 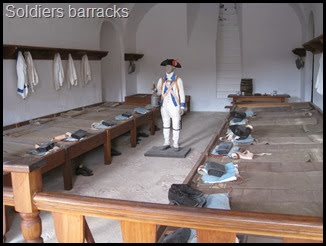 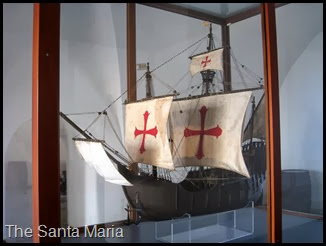 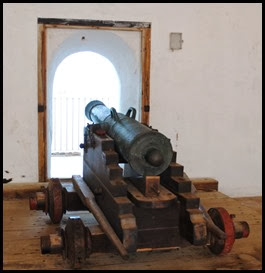 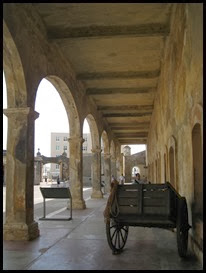 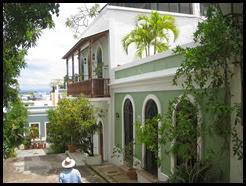 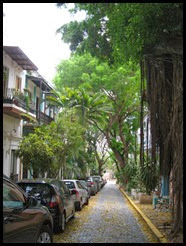 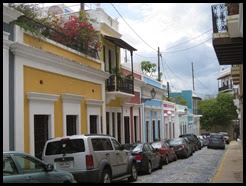 Having had our fill of history for one day we met up with Liam again and strolled the faded blue cobblestoned streets until we bumped into our favourite tapas bar where we stopped for lunch. We discovered this little place by chance the last time we were here two years ago, and still had lingering memories of their refreshing Sangria and  great selection of tapas plates including some very succulent lamb cutlets with rosemary and honey. The family run Rosa De Triana  at 72 Calle Caleta de San Juan,  is just down the street from the cathedral and is highly recommended by the GWTW crew as a fabulous spot to stop after walking your tootsies off around town. 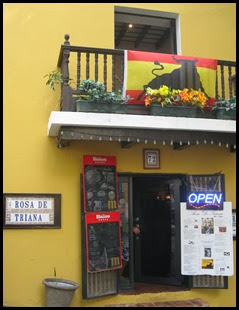 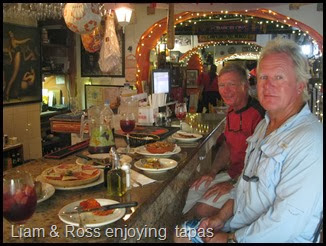 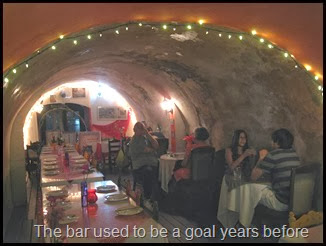 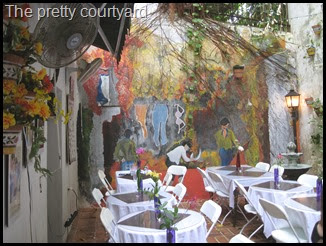 There is so much to see in the old city that one day really isn’t enough, but as GWTW was anchored on the other side of the island we had no choice but to hit the road and head home. So with sore feet and full tummies we said adios amigos to one of favourite cities.