As you know from reading our blog, we have spent a lot of time hanging around in the British Virgin Islands, but one island that we hadn't been to was Anegada. Surrounded by a maze of reefs which have claimed many a ship, this small island sits just 14 miles to the northeast of Virgin Gorda. One thing with sailing in the Caribbean is that the trade winds nearly always blow from the east or the north east which usually makes it a slog to go out to Anegada. 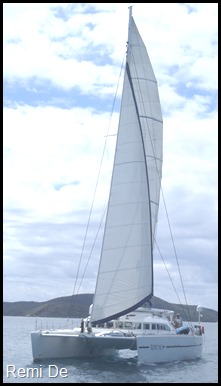 So when there was a change in wind direction for a couple of days we took the opportunity, along with Remi De, to blast out to this new destination. After a few brisk hours of sailing we  arrived there mid afternoon.The waters around the reefs on our approach were a lovely clear turquoise but sadly, that was not the case in the small anchorage at Setting Point. Being somewhat reedy and murky it was anything but inviting for a swim. 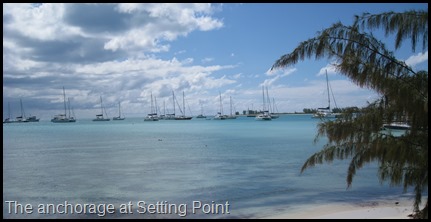 Around twenty boats were already in the anchorage as we motored in  looking for a good spot to drop the anchor. The charted depths were ok but suddenly our depth alarm sounded  and our starboard keel hit something very hard, an uncharted underwater obstruction. The whole boat and rig shuddered as we came to a very abrupt stop. It was a sickening feeling. We were definitely stuck fast on whatever it was. Try as we might we couldn’t get free. As quick as a flash Bruce from Remi De put on his mask and snorkel and swam over to see if he could help. He said it looked to be part of an old tractor engine, part of which had a pointy spike and that spike was now embedded in the front of the keel…bugger!  After much tooing and froing  and with Bruce still in the water, we managed to reverse back off it. Welcome to  Anegada, not!  Thoughts of us having to haul GWTW out for a probable costly repair, let alone the price of the haul-out for a few days, raced through our minds, and they were not pretty thoughts at all.

Once we got the anchor down Liam and Bruce had another look at the damage and concluded that there was a 4 inch gash in the front of the keel but, as the hole hadn’t gone all the way through the keel wall, it could more than likely be fixed by packing with underwater putty until we hauled the boat in July for the hurricane season. Seems this is the season of breakages on GWTW, not sure why actually, but we pray next season will be better…feeling sorry for us yet? Didn’t think so.

Right, that was definitely enough stress for one day and being a little bit more comfortable now with what had happened, we decided it was time to go ashore and check the place out. 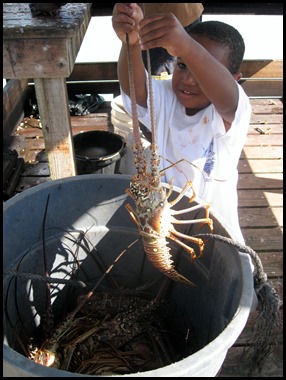 Anegada is famous for it’s lobster dinners on the beach and that’s the main reason that people come out here. Just past the dinghy dock one of the locals, with the help of his son, was dispatching a few of these tasty crustaceans for the dinner orders that evening. They were an ok size, but nothing compared to the ones we’d had in the Bahamas last season. A few colourful restaurants dotted the foreshore  and most  had their BBQ’s smoking and dinner tables on the sand laid out, just add hungry guests. The scene looked appealing but at a cost of US$50 for half a critter our money stayed firmly in our pockets. We would be indulging in our own BBQ on board GWTW instead.

Apart from lobster dinners ashore, which aren’t always in everyone’s budget, the guide book also says there are endless miles of beautiful white sandy beaches, some excellent snorkeling on the northern side and off-lying reefs, flocks of pink flamingos on the inland lake and plenty of solitude, if that’s what you are after.

Armed with all this tourist knowledge, next morning we  set out on a long beach hike with the crew from Remi De, which includes their two small fluffy white dogs, Ollie and Marley. The long beach on the western side was just gorgeous. The sand seemed to go on forever and the water was clear as. 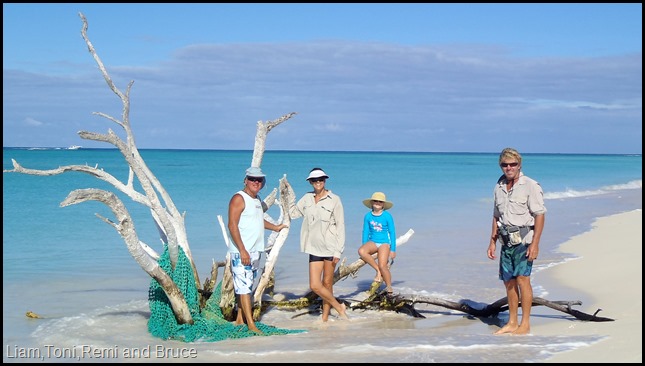 Way up the end was what looked like a small resort, but the buildings were all at weird angles, sort of like they were falling over. Of course this needed further investigation by our inquisitive little group so onward we went. Now this would have been a pretty neat place to stay.  Several of the cute little villas were just a stone’s throw from the water’s edge but the huge sand bags out the front of them told part of their story.

Obviously they been hit by some huge storm surge recently and were now, complete with furnishings, bedding and everything else, crumbling into the sand. It was a sad sight. 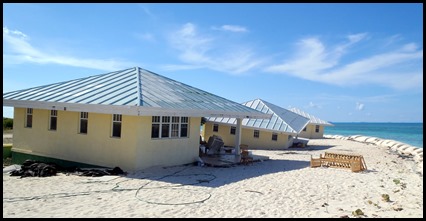 After a couple of hours and several miles we had seen enough and headed back to the boats, though Ollie and Marley provided a little more entertainment en route…they spotted a cow, not a big one, but a cow it was and it needed to be chased, so off they went. It was quite hilarious actually, two little white fluffy dogs snapping at the heels of a pretty disinterested cow, he led them on a merry chase for maybe a mile, disappearing into the bush, perhaps never to be seen again. They were focused on a mission and no amount of calling after them seemed to register, it was “get that cow or bust!” Thanks to the efforts of Bruce and little Remi the dogs were finally found and brought back to the beach, along with lots of nasty burs in their fur and paws. Still, it didn’t slow them down in the heat of the pursuit, though Ollie, being the elder and not so fit of the two, did need to be carried the rest of the way. 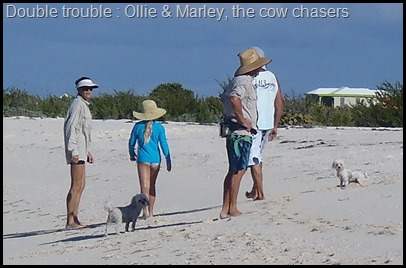 By the time we got back we were mighty hungry and thirsty, breakfast / lunch was sounding pretty good. Back down near the dinghy we ran into some people who had just come back from snorkeling at one of the north side  beaches. Great, we thought, we’ll get the low down from them as we wanted to head over there later on, but they said the conditions were a bit boisterous and the sand was quite stirred up making the visibility less than perfect. Rather than waste our time we decided to hit the road in search of the island’s other attraction, the pink flamingos. Walking for miles in the hot sun isn’t a smart thing to do anytime, and we started to feel like we weren’t destined to find our pink feathered friends. Stopping for some directions we were told that the flock was up near a bridge about ten minutes further on. Quite often we find that people who drive cars and rarely walk, as we do, have absolutely no conception of distance. We’d already walked about 2 miles and now we were told we’d have to keep going for who knows how much further. 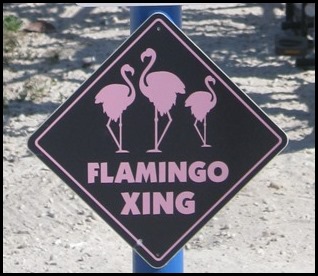 Finally, and a lot more than a ten minute walk for sure, we got to the bridge and you guessed it, there was not one damned bird to be seen let alone any pink ones. Scouring the distant shoreline of the lake a couple of miles away we thought we saw something pink, but maybe it was just our imaginations, oh well we tried. All was not lost though as on the walk back I did get a picture of  a pretend flamingo in someone’s front yard sporting sunnies and a camera. That will have to do till we bump into a real one somewhere.

So with the lack of pristine reef snorkeling, no pink flamingos, hitting something that put a hole in our keel and then to top everything off, Liam accidentally nudging his precious Wiltshire BBQ mate over the back of the boat, never to be seen again, you could say that  the Anegada experience we’d been looking for wasn’t all that  wonderful. On day three we decided to cut our losses and head back to the mainstream islands of the BVI’s. At least now we can say, been there done that and tick it off the list.