Chilling out in the BVI’s

It was nice to be back in the British Virgin Islands after our little side trip out to Anegada. This part of the Caribbean really feels like our own backyard, we’ve been here so long and know it so well. t will be sad when in a way when we actually have to move on. Over the next two weeks we revisited many of our favourite bays and hung out with Remi De, No Rehearsal, and on their days off, our long time friends Gordon and Ginny who now work as captain and crew on a 45ft catamaran for Festiva Charters.

Deadman’s Bay on Peter Island is up the top of our list when it comes to lovely anchorages. 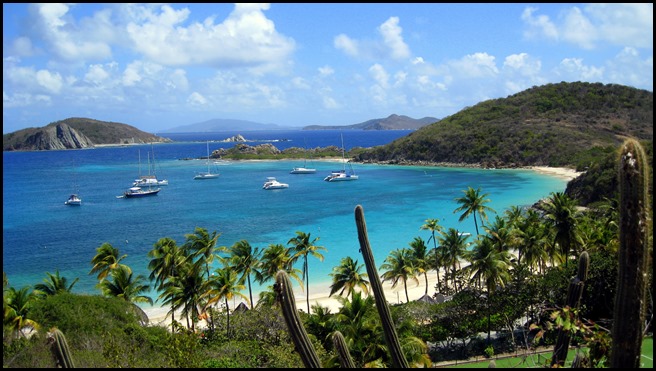 The snug bay, crescent shaped beach backed by palm trees, clear water and lots of  turtles and stingrays make it a special place for us. 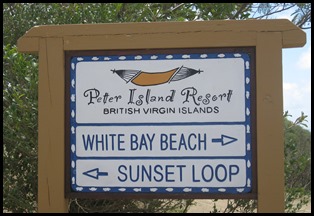 As with  quite a few others in this part of the world it is a privately owned Island with a rather ritzy resort and a couple of very expensive homes high up on the hilltop that are available for rent. Apart from the anchorage itself, a couple of other things we like about the place is that it is very cruiser friendly. The management are quite happy to have people like us stroll around the resort, hike the trails and make use of their restaurants and bars as well as  their free wi-fi signal. They have even set as side a part of their beach complete with chairs and a the sign saying “For the use of visiting yachtsmen”, and presumably they mean yachtswomen as well ! 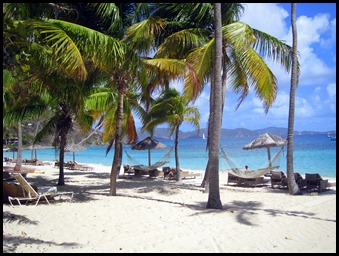 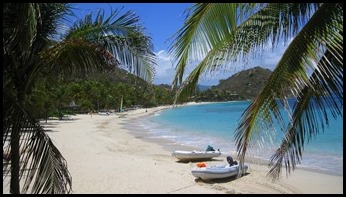 While we were here Liam notched up another year on planet earth. Although the banner behind him in the picture says 60th, he was a tad older than that this year. I just couldn’t find a banner with the right number on it. We celebrated with the crew from Remi De and of course their two pooches, Ollie and Marley. 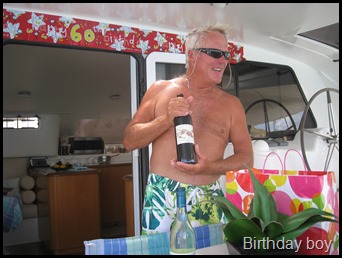 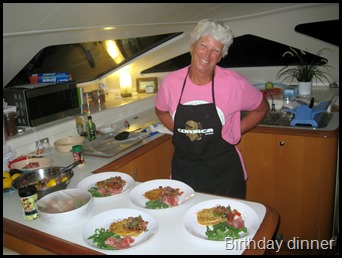 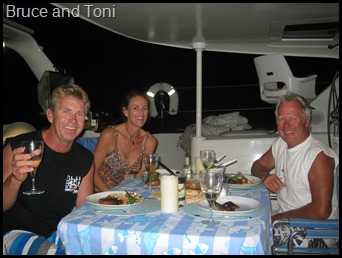 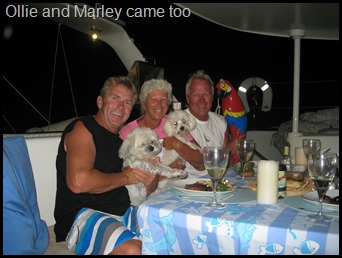 From here we moved a few miles west to another of our favourites, Norman Island. It used to be called Treasure Island back in the days of pirates because here they hid and buried  the treasures that had been looted. Some strong southerly winds were forecast and “The Bight” at Norman was a great place to hang for the next seven days until the strong winds had gone through. Norman is also a private Island and like Peter Island has everything we cruising folk usually have on our wish list. Free internet, somewhere to eat out if we want, clear waters, good snorkeling and diving and excellent holding for our anchor. There is also a runabout boat operated by a very enterprising fellow, which services Norman, Peter and Cooper Islands. “Deliverance” makes it’s rounds through the anchorages  and for a reasonable fee sells fresh fish, bags of ice, bread, beers, ice-creams, magazines etc and also will take away your garbage. What a great little business to have.

Another attraction, if you can call it that, is a floating bar-come-restaurant called the “Willie –T”. It is very popular with the holiday makers on the charter boats. Every day they rock into the bay and dinghy loads of happy revelers spend many hours imbibing at the bar. It’s a bit of a tradition that  after a few drinks you climb up on to the roof and jump off into the water below. Most people doing this are clad but as the afternoon wears on  and  the alcohol starts to remove their inhibitions some actually take their clothes off. Not a pretty sight at all and we much prefer it when their leave their gear on.. But the attraction of this place for us is not what goes on above the waterline but more  about what ends up on the seabed below. You see it’s like this, the silly people jumping off forget that they have money and phones in their pockets and sun glasses on their heads. The water under the Willie-T is 30ft deep so without scuba gear the owners of the lost items can’t recover them.You getting the picture here? So a little pastime for Liam and Bruce (Remi De) was to dive under the bar every couple of days and scoop up the booty. Bruce had much more lucrative finds than we did and his net result was 15 pairs of expensive sunglasses, a few cameras and phones and over $300 in cash. Not bad for a 10 minute dive every so often. So the island really did live up to it’s former name. 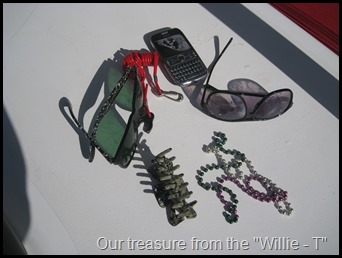 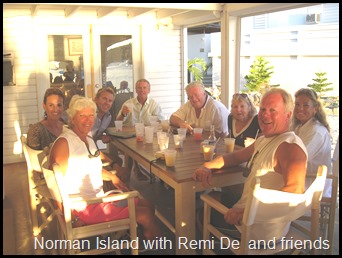 During our stay here at Norman my girlfriend from Sydney wrote asking if her hubby, Ross, could drop in and stay a few days . He was in over in Portugal to help deliver a boat across the Atlantic to the Caribbean. After 5 weeks the boat was still not ready and Ross could wait no longer. Of course we said yes to having him visit and he was due fly in in the next few days. We had also arranged for some more  fiberglass work to be done on the boat which meant that we would already be  in a marina so his timing couldn’t have been better. More about Ross’s visit in our next blog update.