The Virgin Islands, so hard to leave paradise

After my sister and niece left us in St Thomas, we stayed put in Lindbergh Bay for another week. It’s a lovely spot with a nice beach, easy access ashore to supermarkets or whatever else we might need and, being aeroplane junkies, we could sit and watch the planes take off and land all day long if we wanted. We had been on the go since we arrived back to Trinidad at the start of November, and kicking back with no immediate agenda felt pretty damn good.

With nothing pending on the horizon we were free agents to go when and where we pleased, weather dependent of course. For us that meant catching up with long-time cruising friends and flitting between the USVI’s and the BVI’s, and that’s exactly how we filled in our time over the next couple of months.

English friends Bridget and Peter from White Rose were due to arrive at North Sound, Virgin Gorda, from Saint Martin sometime on January 27th, so that morning we headed back over to the BVI’s to meet them. They had also sailed from Trinidad, and had been delayed some months due to Bridget being less than well over recent months. We were very excited to see them again and shared their joy and enthusiasm at being able to sail again after a long time ashore. It was a special reunion.

The great thing about the Virgin Island chain is that it is easy to check in and out of each country and the distances between all the islands is usually just a few miles. That is what makes this part of the Caribbean such a fabulous cruising area. 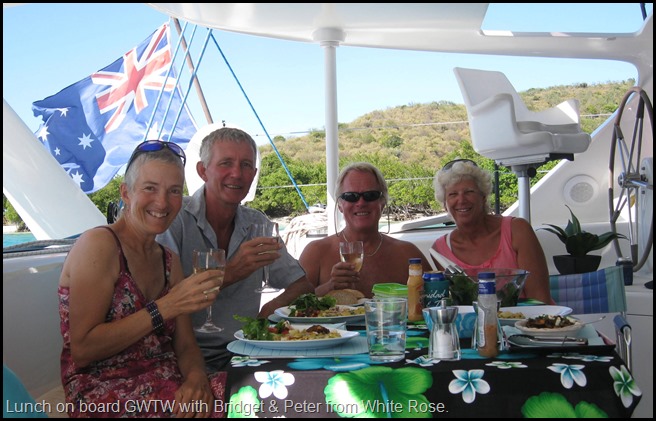 Having been many moons since we’d seen the White Roses on their boat, it was great to be able to show them around over the next few weeks. Together we  enjoyed walks on bush trails, good meals, beach parties, lots of laughs and Liam’s guitar playing and jokes, the latter always being a hit with Bridget. We didn’t spend the whole time living in each other’s pockets, most cruisers need a break from even the best of friends at some time, so Liam and I decided to check out a small restaurant for lunch that we’d heard about. Sydney’s Peace & Love was actually quite good even though there was a pretty limited menu. The bar, the only one we’ve ever come across like it out here, was a self serve honesty system. You would write your boat name in the book and a stroke for every drink that you had, alcoholic or not. Pretty neat we thought. 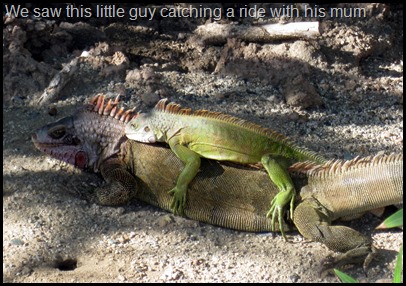 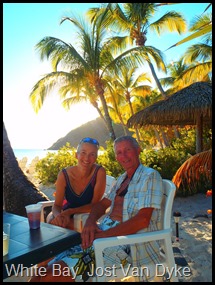 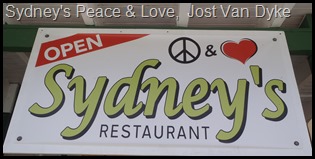 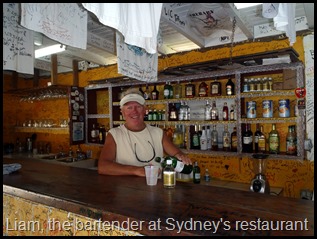 As big as this planet is, you’re never alone much when you are cruising. There are always other boaters coming or going and usually a get together of some sort. The choice is ours whether to socialise or not. No one ever feels obliged and rarely does anyone get offended by a refusal to attend a gathering. Sometimes we have a close knit group of friends to spend time with and other times the circle expands as you meet new folk whom you may have heard on the radio several times, but have never actually met face to face. That’s the way of the world out here on the water and it’s kind of nice. You just never know who is going to pop up in your anchorage.

During February we received an email from our good friend Pete back in Sydney, asking where we’d be in the next ten days, naturally we said the Virgin Islands. A few days later he was on the big silver bird winging his way to meet us. Picking him up at  St Thomas airport, and by the way that is a really convenient place to meet fly-in guests, coincided with the arrival of Aussie and Kiwi cruising friends from the USA on their catamarans Remi De and No Rehearsal. Over the years we have cruised thousands of miles in company with these two boats and they really are like family to us. It was great to have the herd back together again and lots of fun for Pete too, he knew everyone from a previous visit to the Bahamas and blended in like one of the regulars. 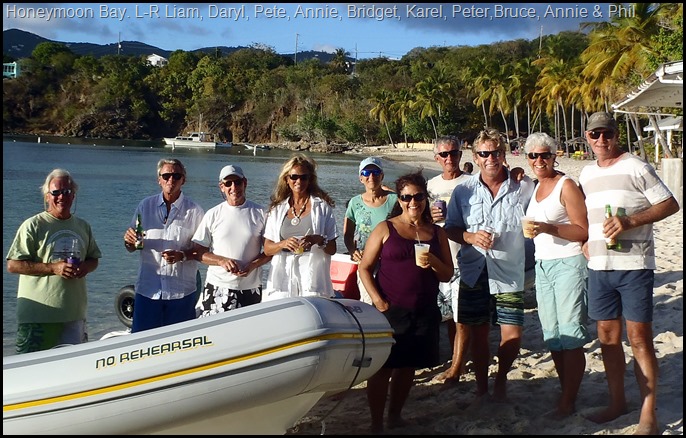 Sadly our little group of boats, Tehani Li, No Rehearsal,Remi De and ourselves said goodbye to White Rose mid February as they headed west from the USVI’s towards Puerto Rico and the USA.

After a few days we left the island of St Thomas, with it’s dazzling jewelry shops and cruise ships, and headed for the greener, and quieter, pastures of St John.

Most of this Island is part of the US National Park system and the pace here is  much more sedate. A breath of fresh air one could say. One quirky thing with the National Park is that anchoring is only permitted if all the mooring balls in the bay are full.This not only helps preserve the seabed but also the grass on which the turtles feed. Who would want to deny a turtle it’s dinner, right? The ball and/or anchoring costs $15 per night, daytime use is free.The cost of the mooring also entitles you to leave your garbage in the parks recepticles. No Rehearsal and Tehani Li parted company with us  so that just left us and Remi De. We spent a couple of days in both Caneel and Maho bays chilling out, swimming, snorkeling and hiking a couple of the many trails that criss-cross the Island. 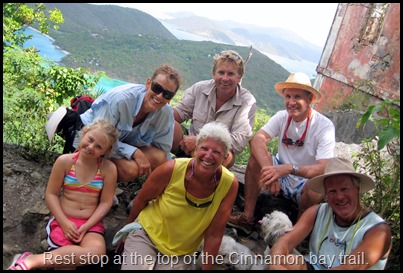 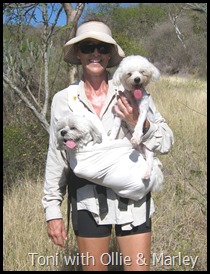 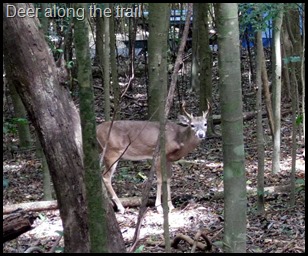 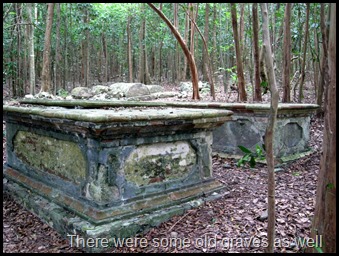 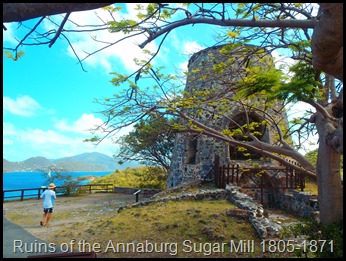 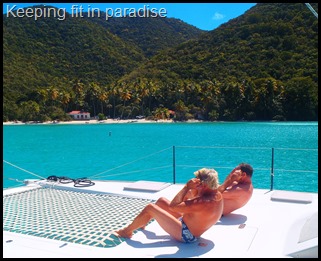 Some days we are pretty active, some days we’re a bit laid back and other days we fix things. Liam had Pete on the job polishing light fixtures, cleaning the dinghy and fixing one of our trampolines that had been damaged by a large wave that hit us a few months earlier. Pete,on the other hand, had Liam on a get fit campaign, which didn’t  really last long.

Time came to move on again and after doing the check-out/ check-in dance  we found ourselves back in the BVI’s and ready to show Pete the sights. Sometimes, when we have friends on board, we start to feel a bit like a charter boat but we really don’t care as we love this part of the world.

You may remember from an earlier blog posting that on the same day that we tore part of our trampoline the port side turning block parted from our coachouse roof. The time had come to have it fixed but it would mean spending a few days in a marina. So after employing some recommended tradesmen, spending three days tied to the dock at Village Cay Marina,Tortola and parting with many dollars our repairs were finished and we were back in business in the sailing department. Road Town, where the marina was, is a very colourful place as the pictures below show. An ongoing theme throughout the Caribbean Islands is to paint the shop fronts and homes in vibrant colours and it really dresses up the buildings. 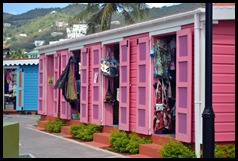 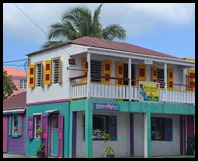 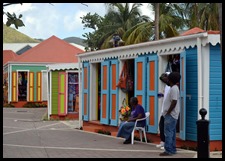 Marinas are not really our style and they are not very often in our budget, and we couldn’t wait to get over to Norman Island. The clear waters, calm anchorage and hiking trails here are a big draw-card for us.

After a couple of days we moved on to Peter Island for a day or two and then Salt Island to dive/snorkel the 310ft wreck of the HMS mail ship, The Rhone.The remains have been down there since  the 1800’s when she dragged anchor during a storm and all lives were lost, but amazingly she still is in remarkable shape and makes for a very interesting dive. 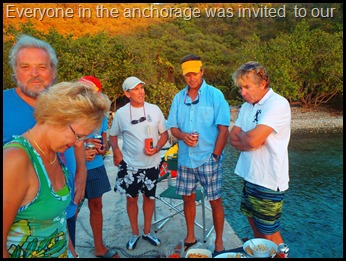 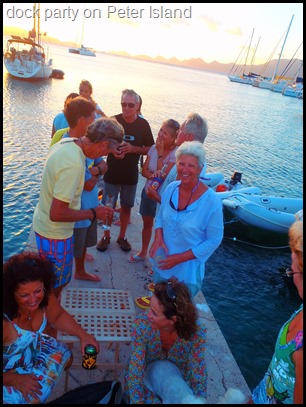 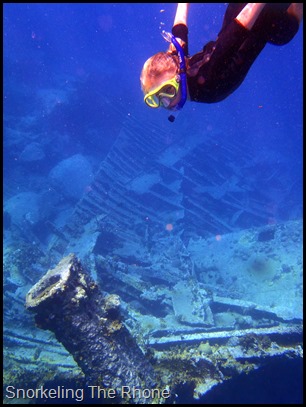 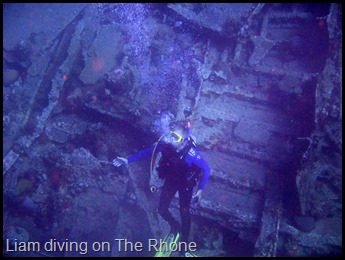 Over the coming weeks we did the BVI circuit and took Pete to The Baths and Saba Rock both on Virgin Gorda, Cane Garden Bay on Tortola, to White Bay on Jost Van Dyke and down to the US island of St Croix where we caught up with  American friends Sarah and GB. Previously they owned a boat called Djarrka and have now swallowed the hook and moved back to land.They drove us all around the Island for a couple of days and we in turn took them out for a day of sailing on GWTW It was great to catch up see again them after four years apart. 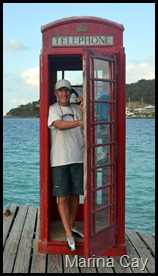 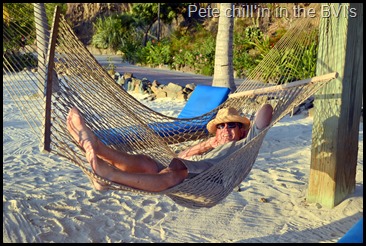 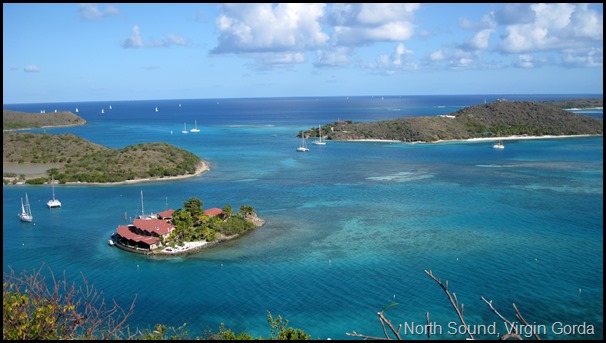 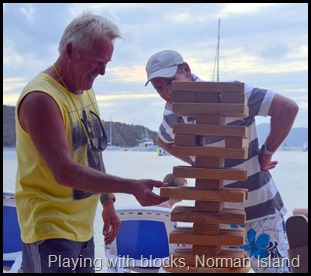 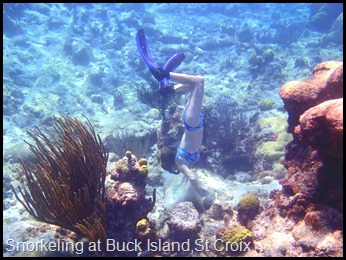 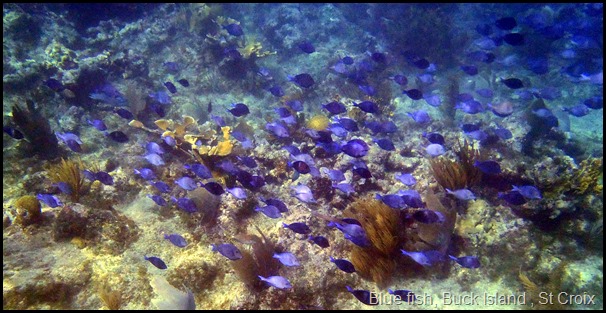 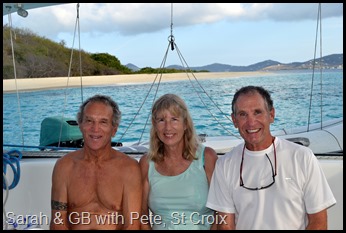 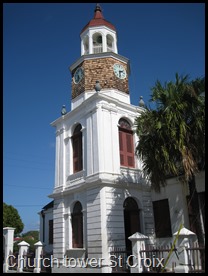 Before we new it the time had come for Pete to leave so on his last night we had one final beach party with an obligatory fire. He still had a few weeks of holidays left and had planned to spend some in the Dominican Republic. Next morning we headed back up over to Road Town to drop him to the Fast ferry and bid him goodbye till his next visit where ever that may be.As we were still in no hurry to leave we planned to stay in the Virgins for another month or so. 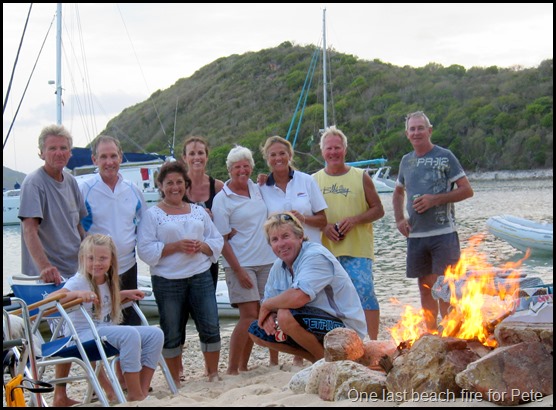