Raising the window blind of the Qantas A380, the distinctive orange sandstone cliffs of the Royal National Park were just visible in the early morning light.The clock was approaching 0530 and the twinkling street lights of the suburbs abeam of us gradually began to disappear, as the first rays of sunlight pierced the deep blue skies over the city we call home. It was a magical view, a snapshot in time that is burnt into your memory forever. With a jolt back to reality, a rather bracing 11c Sydney morning greeted us after a marathon flight from Trinidad via Miami and Los Angeles, definitely something we certainly weren’t ready for. It had been a long time since we’d worn jeans, shoes, socks and heavy jackets.This type of dressing will  never catch on for us. Met at the airport by our good friend Pete, within half an hour or so we were sitting in his kitchen enjoying a warming cup of tea. Pete’s house in the northern beaches area is in the same suburb and only one street away from where we had lived for 22 years, back in our landlubber days, and it was here in our old backyard, so to speak, that  we would base ourselves during our visit. Winters in Sydney are crisp and cool to say the least. Every day started the same. Snuggled under the doona, in a bed that you could actually get out of on both sides instead of crawling out the end, it was an absolute joy waking up to the wonderful sound of laughing kookaburras, lorikeets and the early morning warble of magpies. It’s these simple things that most Aussies take for granted, which we really miss living on our floating home. 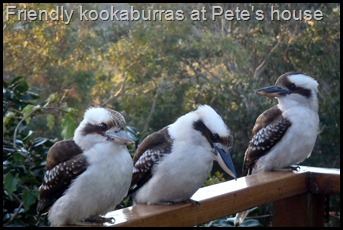 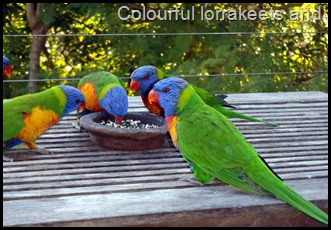 The  two weeks that we spent  in Sydney seemed like an endless feast and the bathroom scales certainly reflected that! Catching up with friends and family became a bit of a blur, although it was a lot of fun. Liam had a good time wining and dining his three kids and he also became a Grand-dad again with the arrival of his daughter’s second child, Olivier. 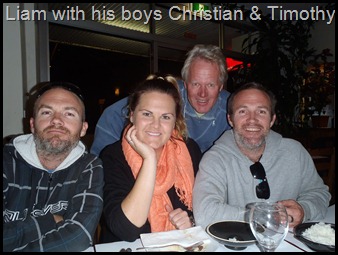 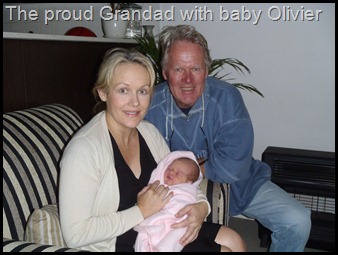 I caught up with my sister Helen who drove over for dinner and stayed the night. A couple of days later the two of us hit the malls, indulging in some much needed retail therapy. There were so many people we wanted to catch up with but the clock became our enemy in the end. Between all the lunches, dinners and BBQ’s with friends and family the time just seemed to evaporate. 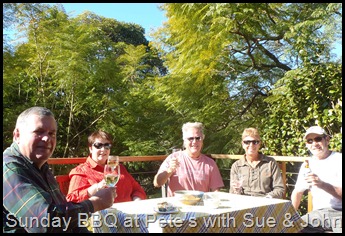 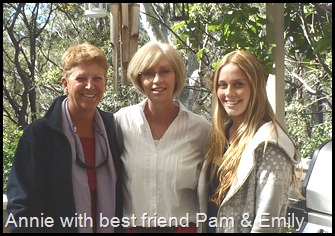 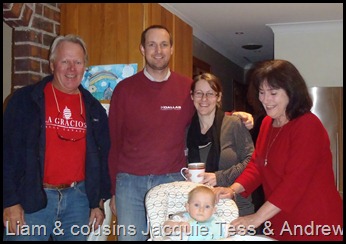 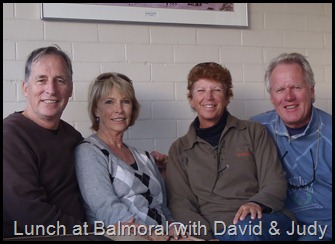 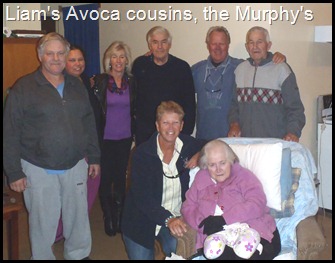 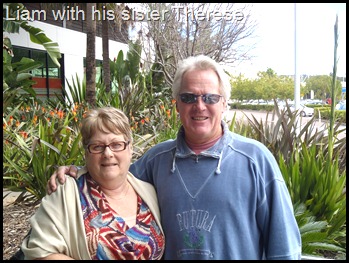 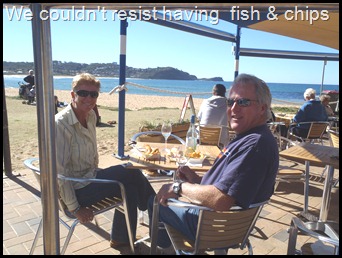 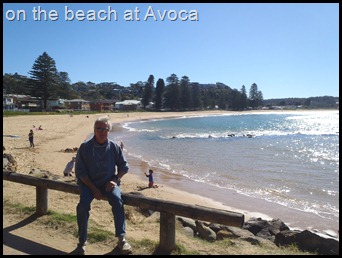 Before we knew it we were on another plane and Gold Coast bound to stay with long time  sailing friends Susan, Nick and their two children. We’ve stayed with them many times over the years but this time their renovations were complete, and what a fabulous look both inside and out the house has taken on. We’re pretty sure that sooner or later it will turn up on the cover of “Better Homes & Gardens”.  After five days of laughter, eating, socializing and catching up with cruising friends, Sandy and Julian from Catch’us, it was once again time to pack the bags and head to our apartment in Phuket,Thailand for the next two months. 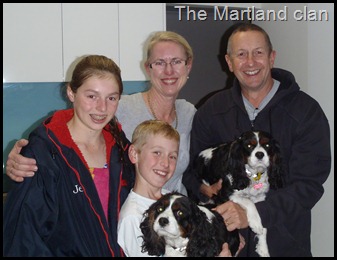 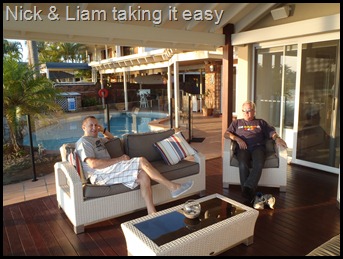 We love having some R & R in Phuket. Nai Harn, where we spend time when not on GWTW, is situated at the very bottom of the island of Phuket and the beach and village has to be one of the best kept secrets around.The place is just so laid back and compared to the tourist hubs of Patong and Kata sporting their girly bars and neon clad nightclubs, it’s a true breath of fresh air. Maybe it’s our age but the time here once again whizzed by.

Lazy days were spent cooling off in the pool, taking long walks on the beach or hitting a bucket of balls at the driving range. 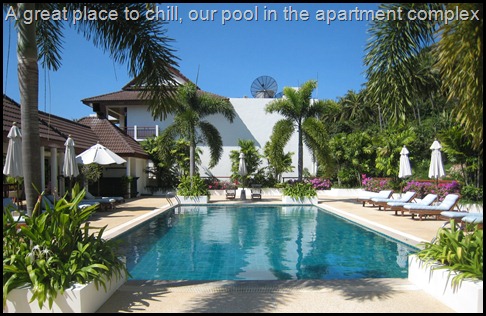 Being the wet season, the rain fell like clockwork most afternoons with the odd thunderstorm at night, much like the weather in Trinidad just before we left. You could say that Thai food is pretty much our favourite. We both love the freshness and quality and had many a meal at the waterside restaurants of the Rawai fisherman's markets just a few minutes drive from our apartment. 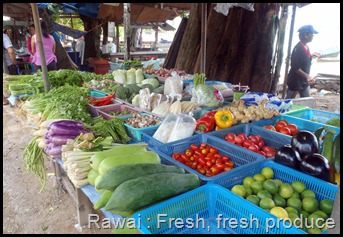 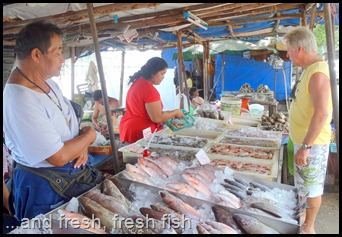 With such a great choice on our doorstep we ate extremely well and inexpensively at many of our favorite local restaurants and ventured further a field  in search of new ones to try. There is a large Aussie expat community living in the Nai Harn area so catching up with old friends and making new ones was also fun. Even Pete, whom we stayed with in Sydney, dropped in for a one week fleeting visit on his way back from a trip through Malaysia and Vietnam. 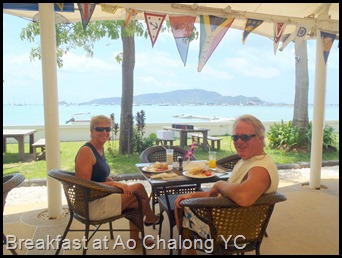 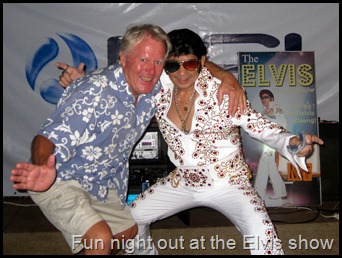 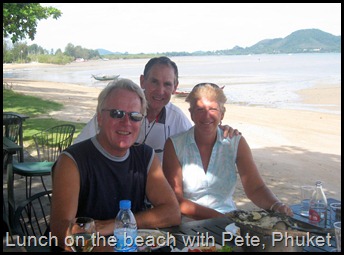 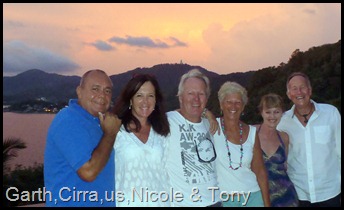 Our final week was spent packing and up and storing our belongings in readiness to rent out the apartment in our absence. Before we knew it we were once again heading to the airport to start the next stage of our trip. This time we were off to Hong Kong and then on to Europe for three weeks.