Life on the Hard in Trinidad

Hauling out “Gone With the Wind” is always a stressful time for us. I mean it’s not like haven’t done it before. Since her launch back in 2004 we’ve done this six times, so you would naturally assume that we’d be used to it by now. I guess it’s more the fact that our house is being taken from her normal liquid environment to a totally foreign one, terra firma .And, having the travel-lift operator disagreeing with us on where the lifting straps should be positioned, followed by our pride and joy dangling in mid-air for what seems an eternity, does absolutely nothing for our composure. Finally, when she is moved to a more stable home on top of some wooden chocks and a few upright supports, we start to relax. The adrenaline running through our veins slows down, we shift our perspective and in the blink of an eye realise that life on the land for the next few months has begun . 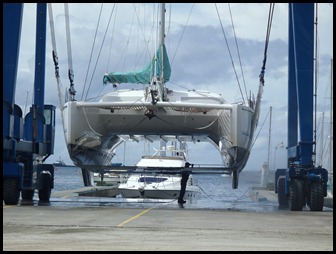 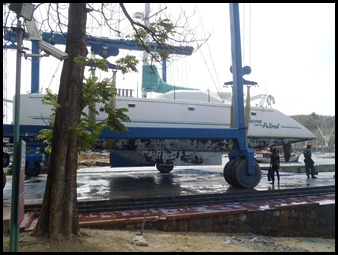 Last year during Carnival we spent a couple of weeks in Trinidad but this time we’ll be living here from April until late July, and that’s a long time for us not to be in our familiar watery surrounds. The work we are having done is very extensive and we won’t be able to live aboard as we’d hoped, so we’ve opted to move into an apartment in the the boat yard next to ours. Peakes Yacht Services, where we are having the work done, does have a couple of apartments but the ones at Power Boats yard are bigger and have better facilities for the same cost. As we arrived in Trini with a fridge and freezer full of food, it seemed sensible to take the room with the oven, full size fridge, cable TV, wi-fi and small balcony. Might as well be as comfortable as possible! 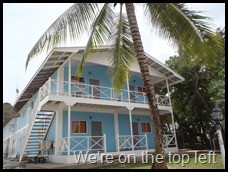 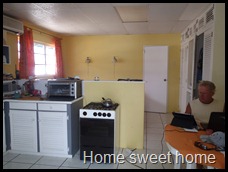 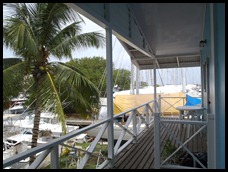 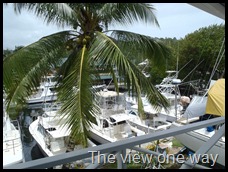 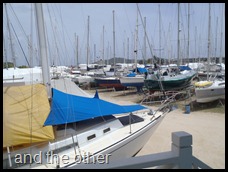 During the first two weeks we were pretty busy choosing / organising contractors and packing up GWTW. Our project is a huge one and involves serious preparation to all the surfaces from the bottom of the keels to the top of the coachouse. The hulls will be re-gelcoated and the decks, smooth surfaces and roof re-painted. We’ve employed two teams to do the job. Colin from Dynamite Marine will tackle the hulls while Davy from Peakes will be working on the decks. But before any of that can start the two of us have to take off all the deck hardware, winches, cleats, sail tracks, turning blocks and solar panels. Meanwhile inside the boat, all the walls and benches  have to be washed down with a water and vinegar solution to try and combat any mold that might grow due to the heat and humidity  that Trinidad is famous for. Also, everything inside needs to be covered with drop sheets and plastic in an attempt to keep all the dust that finds its way in off the beds, lounge and furniture. Lastly, all the outside gear has to find a new home inside, turning GWTW’s  interior a massive obstacle course! 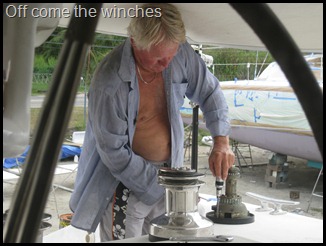 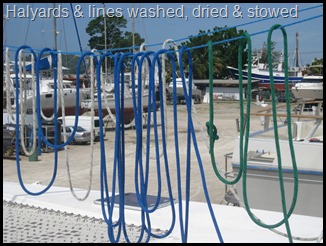 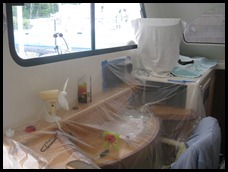 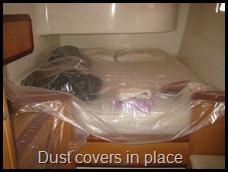 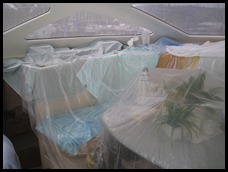 So while we were working on our tasks inside and out on the deck, the boys started working on the hulls. First up was Mikey with the most horribly dirty job of all. He had to sand back the antifoul and gelcoat under the waterline to the bare hull. It was a task that you wouldn’t wish on your worst enemy.The fine black dust was like soot clogging up your mouth, nostrils and stinging your eyes. 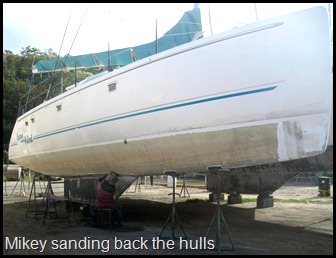 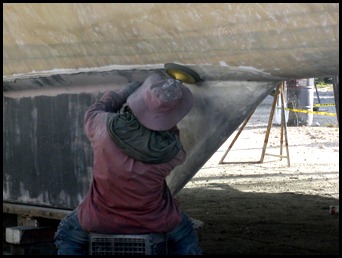 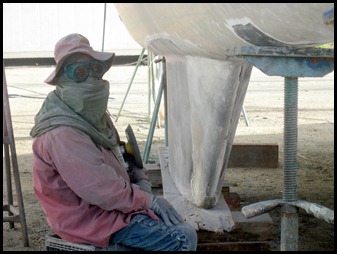 Mikey, working alone and dressed in what looked like chemical warfare gear, could only endure a few hours a day of the dust and heat before he had to call it quits.

His sanding took two weeks and everyone, especially him, was glad when it was over. Next up were the boys from Dynamite Marine. Perched up on scaffolding Colin and his guys took to the hulls above the waterline with sanders. This would be a very long and labourious process involving sanding, filling and re-sanding. With the wet season rapidly approaching we decided to have a tent erected over the boat. This would allow the guys to continue working in anything but the most torrential rain and give them some much needed  protection from the intense heat of the tropical sun. 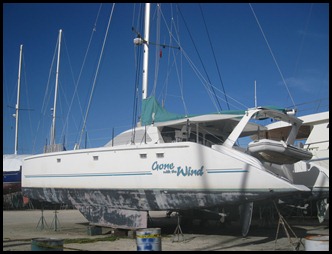 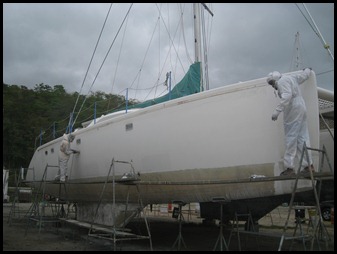 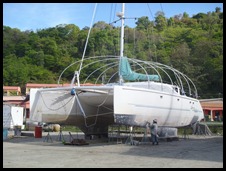 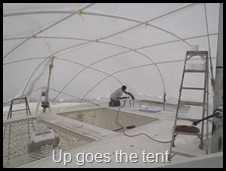 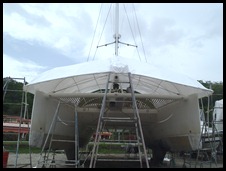 Work on the boat progressed well during the first couple of weeks and slowly Liam and I had less and less to do, boat wise that is. As time went on Davy’s guys, working  up on the decks, taped up all the hatches, fittings that we just couldn’t get off and our cockpit doors, effectively locking us out of the boat. Needing something to stop us going stir crazy, we signed up for a couple of nature hikes with some fellow cruisers. Most of the area surrounding the boat yards here in Chagauramas is National Park and there are lots of trails to explore. Our first hike took us along a riverbed and through a Bamboo Forest. 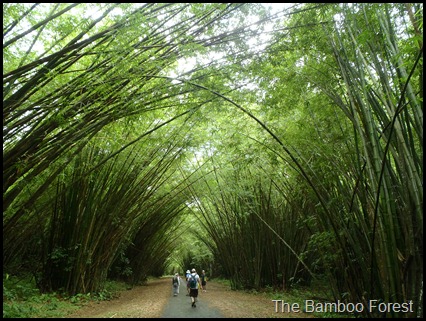 Thick with dense foliage this is a lovely shaded area where huge Bamboo grows over a trail forming what is known as The Cathedral. We heard that on some weekends wedding parties come here to have their photos taken while others come along and set up the whole reception. Leaving the forest the trail led through river beds and up to a cliff top escarpment which overlooked part of the north coast.Trekking back down to sea level we emerged from the bushes at pretty Maqueripe beach where most of the group dived in for a quick cool off. The following weekend our second hike, a slightly more strenuous four mile trail, brought us out at the old radar tracking station built by the American armed forces back in the 1950’s. Not much is left of the station or the support buildings, but it looked to have been a very large facility in its day. 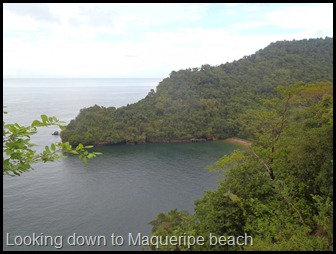 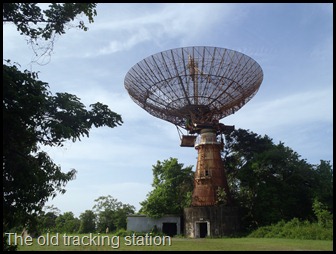 Over the next couple of weeks we are planning to venture further a field. A local guy who looks after just about all the needs of the cruising community here is Jesse James, yes that really is his name. He has a maxi taxi service and regularly organises shopping trips to the various malls as well as some great outings which gives everyone a nice break away from the boat yards and their boats. We’ll also be updating the blog with how GWTW’s facelift is going. We have our fingers and toes crossed that all  the work goes to plan so stay tuned,