All work and no play,well not really

We’ve now been full time residents in our apartment at Power Boats yard for the past two and a half months and are adjusting to life on the land quite well. The last few weeks have been lovely hot sunny days, which has been great for the work that’s happening on the boat. But just lately we’ve noticed the weather patterns starting to change. 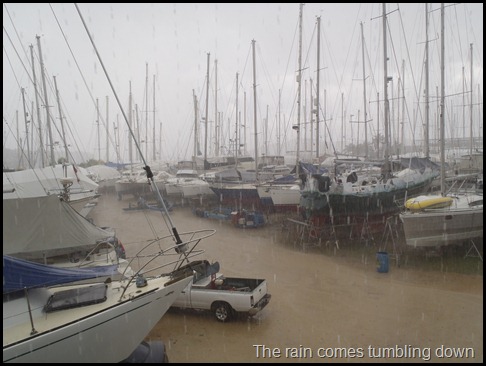 The wet season is slowly beginning to kick in now and most days, come late morning, the tell tale dark storm clouds roll over the hills surrounding Chagauramas bay ( where we are) and we have a torrential downpour lasting an hour or more. This creates havoc around the boatyard as the workers and owners run for cover to escape the deluge falling from the heavens. It is also starting to have an adverse effect on the  time schedule of our work, mind you our guys still assure us that GWTW will be finished by our agreed date in the middle of July.

Life for us is now getting more and more sedentary. GWTW has had her doors and hatches covered over with protective plastic, paper and reams of masking tape and it has become increasingly harder for us to have access to the interior during the working week, although we do tend to sneak back on board on Sundays when the contractors are having their day off. We even managed to set up our BBQ in the cockpit one time and enjoyed a fabulous lamb roast, the seating left a bit to be desired though. 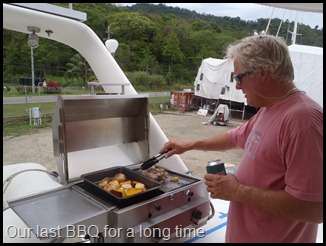 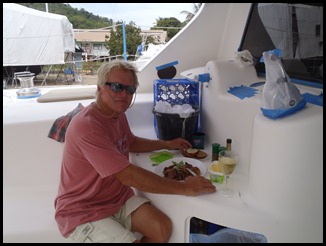 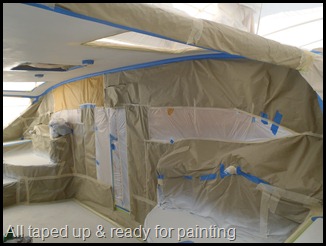 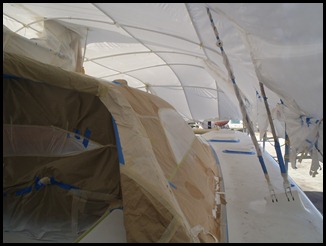 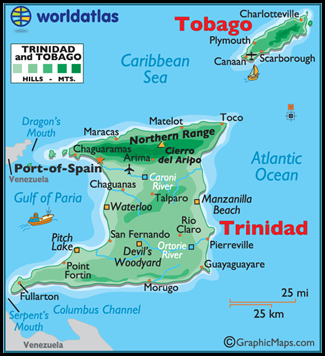 The work on the boat has been coming along nicely but we are starting to get cabin fever and felt the need to get out of the “house” and experience a little more of Trinidad than just the area around Chagauramas. 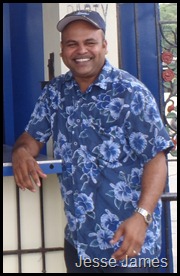 As we mentioned in an earlier post, Jesse James, the local guy who looks after most of the cruisers’ needs down here, also organises day tours, so we along with ten others signed up on what Jesse calls “A taste of Trini” tour. It is an all day eating fest starting at 9am and sees you returning absolutely stuffed at around 7pm. The one big thing that no one had told us is that we needed to abstain from all food at least 24hrs before the tour ‘cause otherwise you will just explode! Apart from the eating, there is a common driving force on each tour and that is to beat the number of dishes consumed by the group on the previous one. Our magic number was to do better than 50 tastings. Now to be clear, the tour takes in only food items grown, made or produced here in Trini, so processed foods and the likes of Macas and KFC are definitely not on the agenda.

Armed with our cameras and appetite Jesse, complete with his undying sense of humor and armada of local knowledge, picked us up in his shinny silver van right on the bell of 9am and off we set on our culinary adventure. The day ahead would take us from Chagauramas through Port of Spain, the capital of Trini, past small towns and fields and over to the east coast of the island. Travelling down the coastline  we stopped at palm tree lined Manzanilla beach and made many stops at out of the way villages, where most tourists never visit, and then snaked back through the teak forests and winding roads of the central highlands and swamplands to the west coast  ultimately arriving back home to the marina after dark. 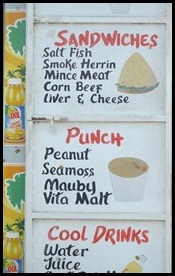 Our first stop was a small shop not far from the boat yard and on the menu was Coconut bread with Smoked Herring and Salt Fish. A Trini breakfast staple apparently. It was a very tasty little morsel but left us with that not so popular waft of fishy after-breath. Would we choose this for brekkie normally? aahh, probably not. Next up was another breakfast dish, Doubles. Now this one we had indulged in before and it is an absolute treat. It’s a very messy concoction of flatbread overflowing with tasty chickpeas all mixed up in a mild to hot pepper sauce depending on what your taste buds can cope with. Doubles are a true Trini favorite and you see heaps of roadside stalls set up with long lines of patrons hoeing into them wherever you go in the morning. Stopping roughly every 15 minutes to top up our tummies, by lunch time we were bursting at the seams and yet there was plenty more to come. 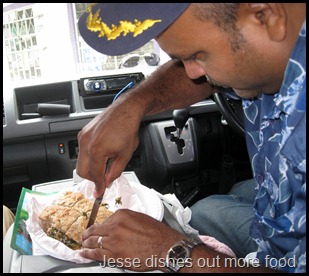 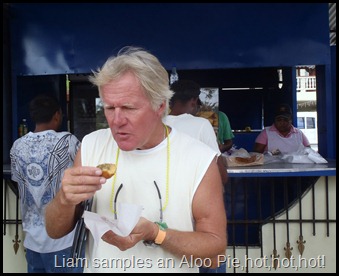 Jessie came well equipped providing everyone with bottled waters, plates, paper towels, (a must), and cutlery. We sampled delicacies such as Curried Duck, Rose Bake ,which is Bok Choy leaves with a tamarind sauce, BBQ Pig Tails, Cow Heel Soup, another favourite of the Trinis, very tasty though  a bit of a chewy texture for us, Boiled Chicken’s Feet, Sugarcane, Polouries, a sweet dough with mango chutney and an assortment of Indian pastries just to name a few. After a long day in the saddle we topped off the night with birthday cake and scoops of vanilla ice cream. Cruisers love a celebration especially when it’s someone's birthday. 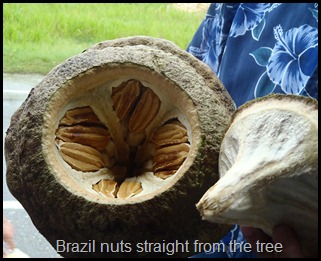 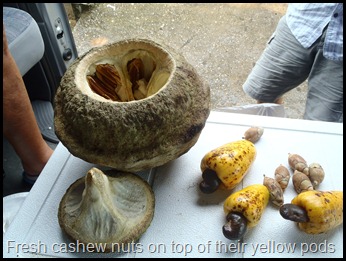 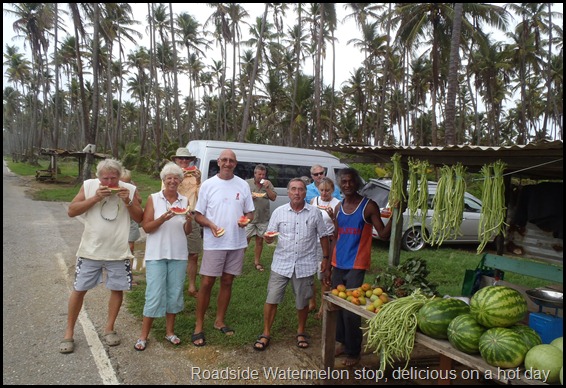 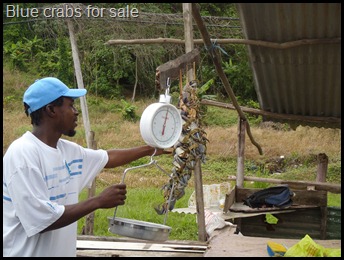 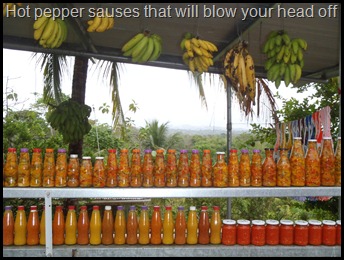 The day was a great success and we managed to ingest 52 different types of foods. Luckily I kept a record of all the dishes we ate so the tally was legitimate. When I read over the list I really don’t know how we did it. Below is what we ate that day and hey, don’t knock it till you’ve tried it!

But our day was not without incident. Rain and winding country roads don’t always mix. Rounding a bend we came across an accident which had just happened. A collision between a truck and a glass carrying ute blocked the road completely. It was all hands on deck as the men folk leaped out of our van to lend a hand to help clear the mangled mess.The driver of the truck was shaken and cut badly from the broken panes of glass on the ute and Annie gave him some much needed roadside first aid. The utility had driven over a couple of downed power lines which had flicked up and caught around the truck’s front tire pulling the truck into the path of the passing glass carrier.The two vehicles then became firmly wedged together and took a lot of manpower and over an hour to separate. 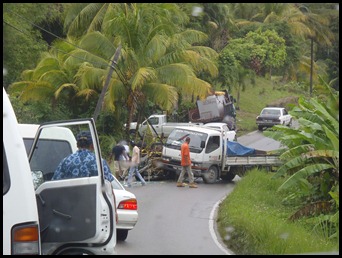 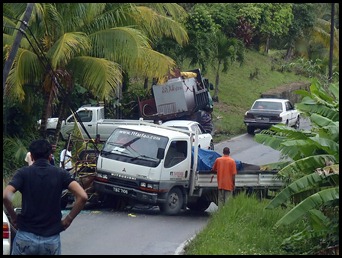 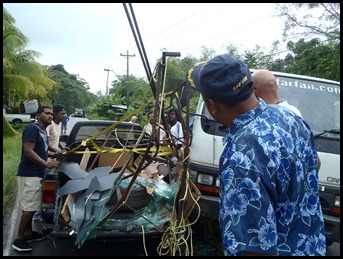 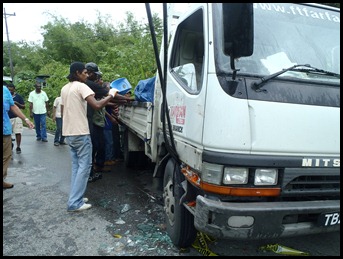 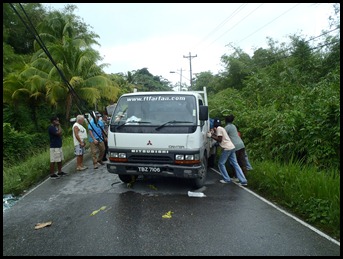 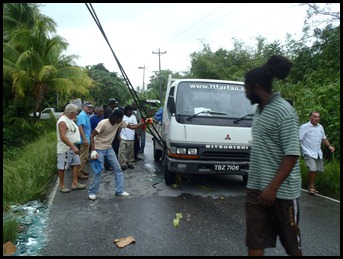 Eventually the power company arrived and cut away the offending cables from the truck and everyone was once again on their way.So as you can see even when we’re not working on boats there’s always something to keep us all occupied.

And that folks was our day out. We had a really fun trip with Jesse and all our fellow sailors and are already looking forward to booking on to our next mini escape from life in the boatyard. Oh and just so you know were so full we didn’t need breakfast or lunch the next day, now that’s gotta be a first.