The idea of sailing from St Martin to Trinidad in one big hit was never going to get up, well not with this brown duck. We can sail hard all day long from from dawn to dusk, but if there’s a decent anchorage within cooee at the end of the day then it has our name on it. So we earmarked the next 8 anchorages and off we went.
After an easy 66 mile sail from St Martin we pulled into White House Bay at the bottom of the island of St Kitts. Five other catamarans were also anchored in the bay but we never saw a human on board any of them. It had been a pleasant day’s sailing passing the playground of the rich and famous, St Barts, the soaring volcanic peaks on the diving mecca of Saba and the lush rolling green hills of northern St Kitts. Arriving just as the sun threatened to kiss the horizon we were glad to stop for the night. 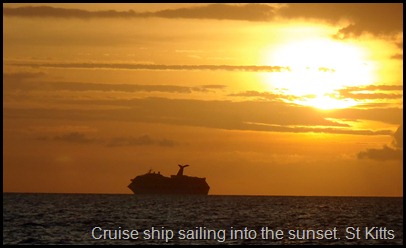 Day two and we were up with the sparrows at 5am and on our way to Dominica, 120 miles to the south east. Taking the passage between St Kitts and it’s neighboring island Nevis seemed the sensible thing to do as we wanted to take advantage of the early morning breeze on the island’s windward side. A clear but chilly morning had greeted us and heading east the rising sun reflected on the water ahead. Watching the local fisherman pull in their traps had us on the lookout for any stray floats in our path. And then it happened. A strange clunk under the hull, the rev of the engine and sure enough we were hitched. Liam pulled the throttles back to neutral and the telltale float reared its’ ugly head from under our port transom. No amount of persuasion with the boathook could dislodge the offending rope, so an early morning dip for the skipper was no longer an option. The current was running at a fair clip and he had a hard time hanging on to the hull to cut the rope free, but after a couple of attempts was back on board with his trophy. Warming up with a hot shower and a steaming cuppa he soon felt brand new and we were on our way once again.
By 2pm the light breeze started to die. The island of Dominica, our planned overnight stop, was still 7 hours away so on went the motors. A couple of miles further ahead lay the the island of Montserrat. Devastated by volcanic eruptions in the mid 90’s which obliterated the hills, towns, homes and 8000 inhabitants of the island’s south west, the ash covered landscape was an eerie reminder of the forces of mother nature. 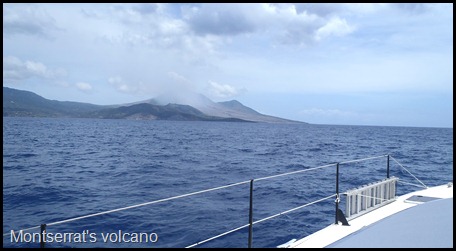 As we motored past the exclusion zone, acrid smoke from the still belching volcano filled the air. Not only was the smell of sulphur in the air but the waters surrounding the island were affected as well. Earlier, as we neared the area we had turned off our watermaker but all too late to save our precious filters.They instantly turned black and were bin bound shortly there after. 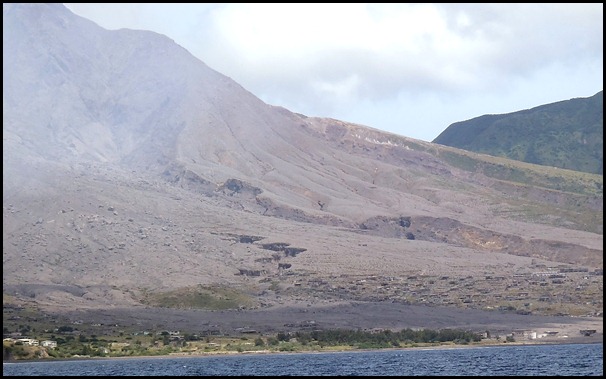 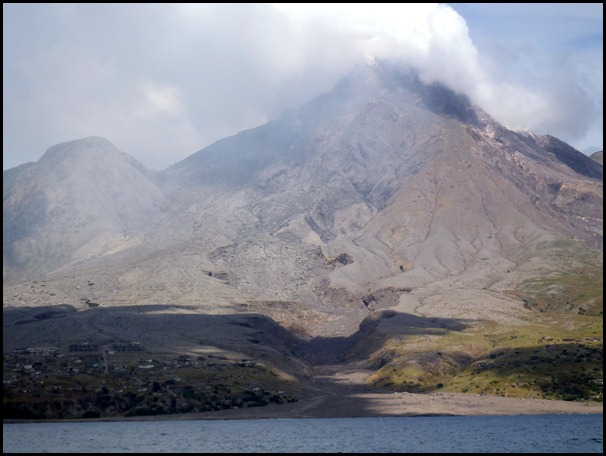 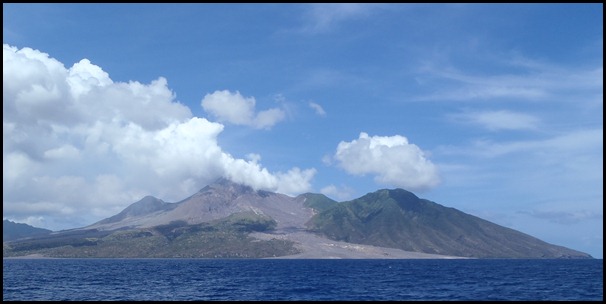 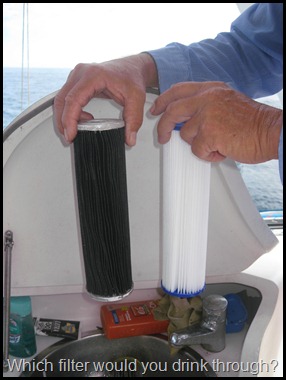 Flexible: the capability to adapt to new, different or changing requirements. This little word is one of the most important in a cruiser’s vocabulary. Timing and weather play a major role in our day to day decisions and seeing an approaching line of squalls to the south of us we abruptly scratched Dominica, still 70 miles away, from our anchoring list for the night. The town of Deshaies on Guadeloupe was a mere 30 miles so plan B was put into action and we made a bee line to our revised destination. It was a good decision.
The next few days all rolled into one with us usually covering anywhere between 40 to 70 miles each day. Easter Sunday had crept up on us this year and we celebrated with a lobster dinner while tied to a mooring ball at the south end of Dominica and sadly, the Easter Bunny didn’t find us. Usually we’re not ones for picking up balls but by the time we arrived it was getting late, a bit of a reoccurring pattern there, and checking our depth sounder the sea floor just disappeared into the abyss. From a narrow band of 20 feet deep at the waters edge the bottom fell away to well over 100 feet within a boat length of the shore. After a few circuits of the bay we gave up on the idea of anchoring. Sometimes you just have to bight the bullet and part with a few dollars in the interest of a good night’s sleep.
As we hadn’t checked in to anywhere since leaving St Thomas in the US Virgin Islands 2 weeks ago, we figured that it might be a good idea to put some sort of paper trail in place. Once we got to Martinique, we paid a visit to the Douane (customs) office, filled out the computerised form, printed it off, showed it to the nice officer behind the desk and voila, another speed record was set, in and out in less than ten minutes! You can always trust the French not to beat around the bush.They really do have a great system for their check-ins. 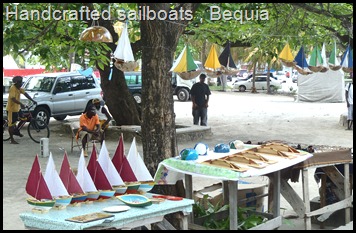 Over the next couple of days we had some fabulous sailing conditions  and with speeds averaging 10kts the old girl really kicked up her skirt. Overnight stops included St Lucia, Bequia and we had considered stopping in Tyrell bay on Canouan  but we found the holding to be very poor so we pushed on to the  the north coast of Grenada. 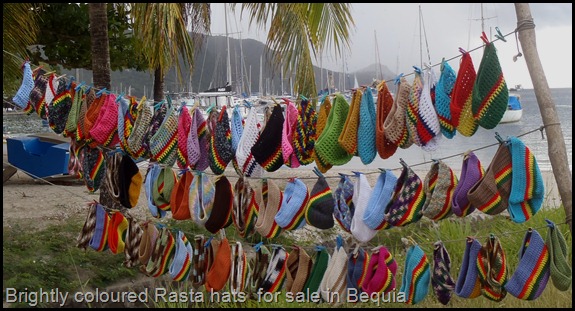 Mother nature had put on a couple of wonderful displays in the sky during the second half of our trip and the halo around the sun, something you don’t see everyday, had even been reported in the local Trinidad papers we later found out. 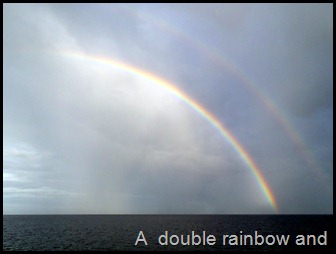 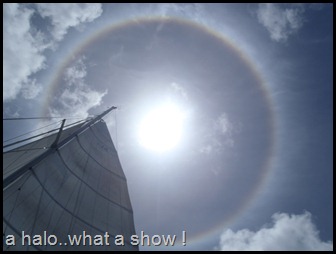 Arriving into Prickly bay on Granada's’ southern coast as planned on the eight day we treated ourselves to a night out at our favourite Chinese restaurant, and then collapsed into bed ready to have a well earned day off tomorrow. Trinidad was now just a hop skip and a jump away at last!