US Virgin Islands
St Thomas
27th - 30th March 2012
Having spent a rather hectic week in San Juan, the capital of Puerto Rico, it was once again time to get a move on as a brief weather window had opened for us to head east to the Virgin Islands. Leaving port just after 8am, as predicted, there was only a zephyr of wind, a pattern that continued all day.The iron sails got a good workout  motoring most of the 70 miles with the only our washing flapping in the calm conditions. 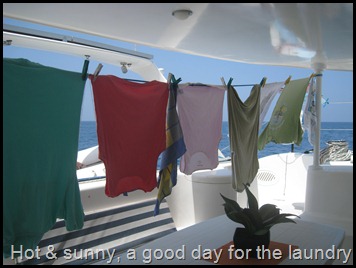 Approaching the island of St Thomas just on dusk the march of the penguins was clearly visible on the horizon. Yes the other type of cruisers, those who mainly travel during the hours of darkness, had begun the  mass exodus aboard their floating hotels to the next Caribbean island on their itinerary. Lit up like Christmas trees the cruise ships that ply these waters never operate in stealth mode.
Our chosen anchorage for the evening was the calm waters of Honeymoon Bay on the north side  of Water Island,which lies parallel to the island of St Thomas.The United States Virgin Islands (USVI’s) which sit between Puerto Rico and the British Virgin Islands (BVI’s) is made up of a small group of islands with the larger ones being St Thomas, St John and further to the south, St Croix. St John, whilst it does boast a couple of resorts, is predominately  a national park where hiking trails, unspoiled beaches, clear waters and abundant fish thrive. The National Park Service have installed mooring balls in the more popular bays in order to preserve the coral and the fragile eco systems of this area, and they encourage the boating public to take advantage of their moorings & services, including garbage disposal, for a moderate fee. Although we didn’t stop here this time the bays and beaches certainly looked inviting.
St Thomas, on the other hand, is as full-on as the cruise ships that visit here. Charlotte Amalie, the main town, regularly accommodates between five and seven of these ships-on-steroids and their 3000 or more passengers that pull in to the port on any given day during the high season. Spending just one night anchored close to the port (and the noise) the joint chiefs of staff on GWTW made the unanimous decision that Honeymoon Bay was a much quiter option for we who prefer a good night’s sleep.

The ships usually arrive at dawn and are gone again by dusk.To do Charlotte Amaile justice we spent two days in the town, wandering and wondering what the attraction of this place really was. 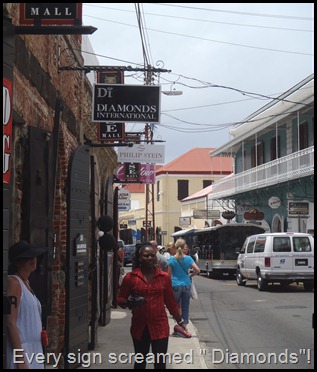 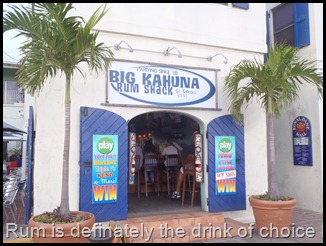 Ok, it is a duty free port so there is that draw card and there are plenty of bars and restaurants, but from our perspective it seemed that it was just one glittering jewellry shop after another, in fact one shop owner told us that there were over 600 jewellry stores in and around the port area. Now, for a small island in the Caribbean that amounts to an awful lot of Rolex watches and Diamonds in one place at one time. So, apart from buying a few things at the supermarket we certainly didn’t boost the economy of St Thomas during our short stay.
Of course there was also the normal array of street markets selling everything from imitation handbags to sarongs as well as the odd historical building dotted around the place including the red bricked Fort Christian which is the oldest building in the USVI’s.. 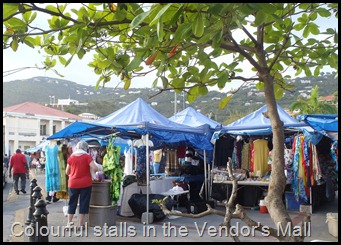 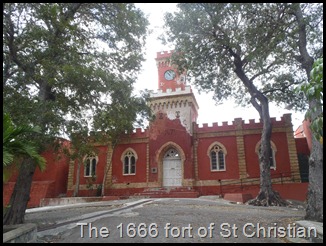 Strolling to the opposite end of town and away from the glitzy shops and tourists we lunched in Frenchtown, a small area with a couple of  very good restaurants, a French deli and not surprisingly a mini Eiffel Tower. 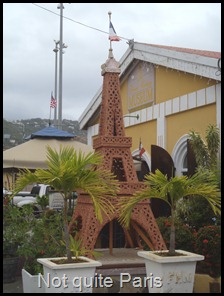 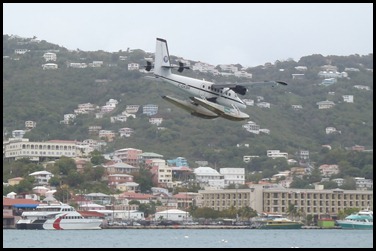 The sea plane base is also down this end of the town and along with the inter - island ferries ,the planes do a roaring trade flying tourists and locals across to the islands and over to St Croix. On the north west coast of the island there are many beautiful bays and beaches including Magens bay where most of the cruise ship passengers spend a couple of hours swimming and snorkeling, when they are not hunting for bargains in the retail section of town. Most of the resorts and the trendy nite-spots are found on the eastern tip of the island around Red Hook, which is also home to large marinas and the charter boat fleets.
So, after spending one more night anchored back at Water Island, we headed over to the BVI’s to catch up with our Canadian friends Gordon and Ginny and a few other cruisers who we’d not seen for over a year. This reunion had been a long time coming and we were psyched up for a busy couple of days.
*****************************************************************
CRUISING NOTES
FORMALITIES: US Customs / Immigration are located in the inter - island ferry terminal on Veterans Drive between Kings Wharf and Frenchtown. CURRENCY : US dollar. SUPERMARKETS : Pueblo  is located a 3 min walk from Crown Bay Marina and also near the main cruise ship terminal in Charlotte Amalie.
Posted by Gone With The Wind .... on safari on Thursday, June 07, 2012

Email ThisBlogThis!Share to TwitterShare to FacebookShare to Pinterest
Labels: Caribbean 2012 - US Virgin Islands