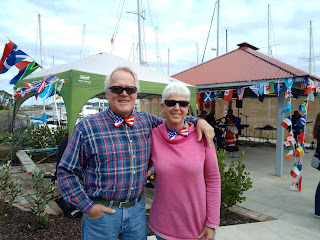 The 4th July rocked around and it was time for yet another party, this time to celebrate American Independence Day.

Held in the grounds of Riverside Drive Marina the Cruiser’s Band played everyone’s favourite tunes until just after sailor’s midnight at 9 pm.

The entertainment included some open mic tunes as well as a sparkly show of midriffs from the marina girls who’d been taking Belly Dancing classes, it was quite a show.

With a plethora of pot luck dishes, complimentary beverages and BBQ, no one left hungry.

During the early part of July, we hit the bitumen for a two week road trip with our American best buds Vandy and Eric from S/V Scoots. As far as plans went we’d be heading south of Auckland with no agenda that was set in stone. Having sussed out and booked a couple of  Air BnB’s for the first few nights, we loaded up their car, affectionately known as Baxter and hit State Highway One.

Our first stop was “sunny” Tauranga although it really wasn’t living up to it’s name when we arrived with the rain tumbling down and all.

After a longish drive pretty much all day we checked into our accommodation for the night ready to explore the sights of Tauranga and it’s surrounds the following day. 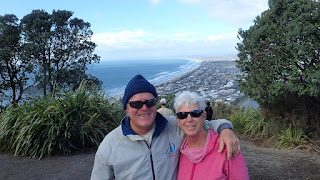 Setting out early we headed to  Mt Maunganui, climbing the 232m steep sided extinct volcano which has awesome views across the entire coastline of the of the Bay of Plenty.

With well marked hiking trails crisscrossing the mount there was no excuse not to see it all.

Lunch was at one of the many eateries down in the beachside town and then we headed off to the Classic Flyers Aviation Museum just out by the airport.

Filled with dozens of aircraft types both working and static along with memorabilia from a bygone era, the self guided tour was worthy of the $15 pp entry fee and the couple of hours we spent there. 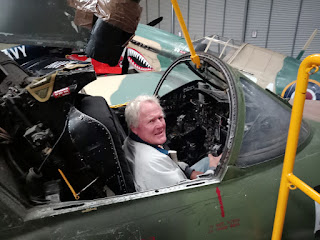 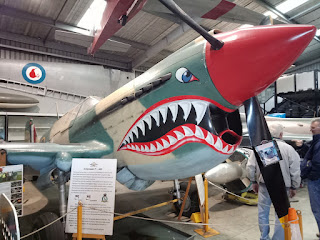 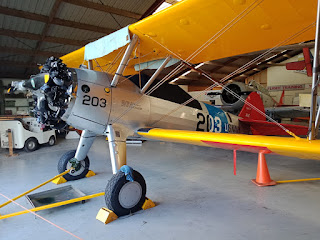 The following morning we stopped for a cuppa with a former colleague of Liam who lives just out of town and is the source of many of Liam’s forwarded jokes.
If you are on Liam’s joke email list then you for sure would have seen the email address of Bruce in Sunny Tauranga. It was great to catch up with Bruce and Maureen and enjoy their hospitality once again.

From Tauranga we followed State Hwy Two along the winding shore and deep fast flowing gorge of the Waioeka River which is a kayakers paradise in these parts. And yes, we did see a few paddlers along the way and concluded they were all nuts.

Arriving at our Air bnb Vineyard Vista in Hexton we couldn’t have been happier. The former family home sat at the end of a small country road surrounded by farmland and vineyards complete with automatic lawnmowers, aka sheep. After the hustle and bustle of the big smoke of Tauranga it was a welcome change to hear nothing but the odd bleat of sheep. Ahh the serenity.

Day four saw us stretching our legs just down the road in Greys Bush Scenic Reserve which is one of the most popular and accessible Dept of Conservation reserves in the Gisborne area.

The reserve is a nesting, resting and feeding habitat to a plethora of both native and introduced bird species including Magpie, Kingfisher, Gold Finch and the list goes on. Seasonally the rare North Island Kaka can also be spotted. A full circuit of all the tracks in the reserve only took around an hour.

Next we were off to Gisborne, winding our way past  the many citrus orchards along the way. Gisborne which sits on the edge of the Bay of Plenty seemed  to us a slow paced city. In 1769 this was the first part of NZ sighted by Cpt James Cook.

As a result of fertile soil and hot summer temps a large wine industry has sprung up in this region. This area is famous as a Chardonnay producer.  Along with the vines the surrounding hills also support a booming forestry industry.

The Gisborne harbour port of Eastport is the second largest log exporter in NZ. Each year it exports between three and five million tonnes of logs.  A lovely waterfront walk graces the foreshore and a memorial to Captain James Cook with an adjoing garden dedicated to Sir Joseph Banks is just a short stroll further on.

Three hours south at Hawks Bay is the bustling Art-Deco city of Napier, here we made camp for two nights. Back in 1931 Napier was hit by a massive 7.2 magnitude earthquake. Lasting just two and a half minutes the inner city almost completely demolished with 258 lives lost.

The quake raised some areas of the surrounding land by two metres turning roughly 4,000 hectares of sea-bed into dry land. The enormous task of rebuilding the city is the reason for the Art Deco flavour of Napier today. That style of architecture was chosen not only for its beauty and simplicity but also because of its strength.

There was a lot to see and do during our stay here. Starting off we signed up for the Art Deco tour. We strolled the streets with our tour leader who imparted a wealth of knowledge about the style of the buildings and their facades.

The Daily Telegraph building was definitely one of the major players of the show with it’s zigzags, fountain shapes and symmetrically patterned façade.

Another favourite was the National Tobacco Company building which combines Art Deco with motifs of Art Nouveau. Roses, bulrushes and grapevines framed the elegantly curved entranceway.

There were dozens of the soft pastel facades dotted around the main streets and all you had to do was look up to enjoy what was on offer. 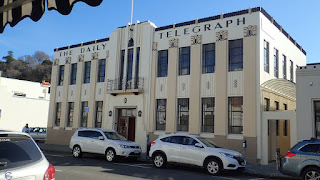 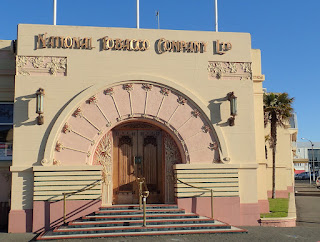 After pounding the pavements we moved on to the Hawkes Bay Museum where we took in the excellent earthquake exhibition and accompanying film. The lookout up at Bluff Hill gave us a birdseye view over the bay, the port, the city and the beautiful snow capped mountains beyond.

Another big hit with us was the National Aquarium of New Zealand.  It is home to over 100 species of aquatic and land animals from both New Zealand and around the world.

One of the main attractions is the huge glass fronted Oceanarium where divers put on an amazing show while feeding the various assortment of reef fish, sharks and stingrays. 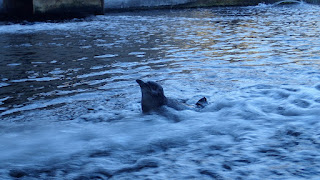 Meanwhile over at the Penguin Cove exhibit we got an up close view of the antics these ever so cute little blue penguins as they dart and dive happily through the water.

There are a plethora of other exhibitions as well, including Coral Reef, Rocky Shore, Reptiles and Amphibians and Native New Zealand Icons, just to name a few. You need to put aside at least 2-3 hours to fully explore place. 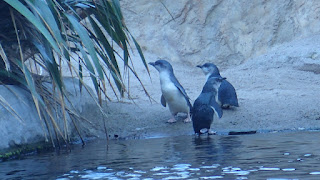 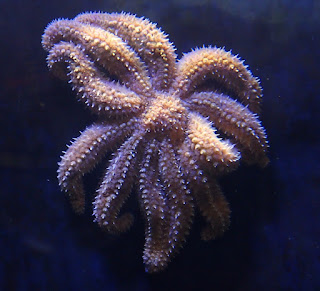 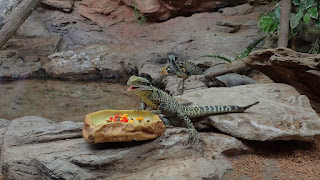 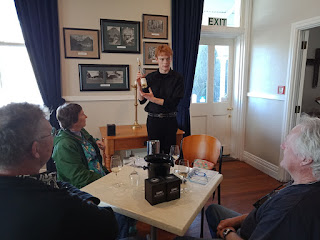 While we were in the Napier area we also visited Mission Estate, NZ’s oldest winery. Formerly a seminary owned by the Marist Order it is now Hawkes Bay’s largest winery. Tastings cost $10 pp but you do get to go home with a boxed souvenir embossed wine glass and the wines weren’t half bad either. 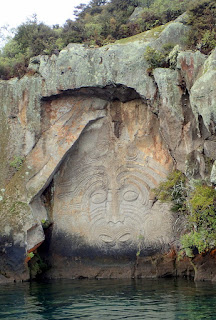 Lake Taupo, the largest lake in New Zealand was to be our last main destination and here we’d rented a house for two nights. It was a huge place  with views over the lake complete with a log fire.

As the weather was rather chilly we made very good use of the fireplace. The Taupo region, like Napier also had lots to see and do.

The highlights for us was taking a lake cruise to the ten metre high Maori rock carvings etched into the cliffs of Mine Bay, stopping at Wairakei Terraces and immersing ourselves in the varying degrees of naturally thermal heated silica pools (sorry no photos as it was a bit risky taking the camera in with us) followed by a stroll through the geothermal park known as Craters of the Moon. 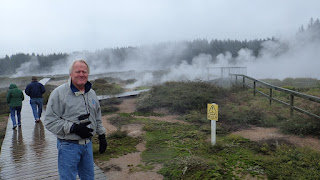 Next up was the former site of the Aratiatia Rapids where the hydroelectric power plant of the same name now stands. I say former as the Waikato River was diverted slightly to accommodate the hydro plant, and the gorge where the rapids once flowed is now dry. However being present as the mighty Wiakato River hydro flood gates opened releasing thousands of litres of water into the dry gorge below had to be seen to be believed. It is truly spectacular. 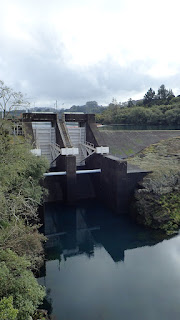 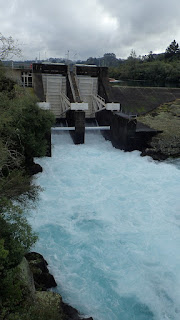 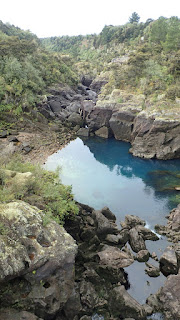 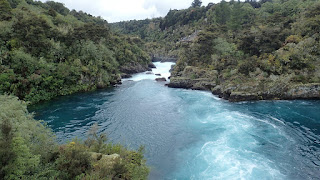 The gates open three times a day in winter and four during the summer months. As an aside there is a scene from The Hobbit movie, The Desolation of Smaug which shows the dwarfs escaping from their captors by hiding in barrels which were thrown downstream in the Aratiatia Rapids.  And  for the finale of this region... that was witnessing the immense power of rushing water as it is squezzed into a narrow chasm, then dropping 10 metres over the Huka Falls to the calm waters of the Waikato as it wends its way 425 klms to the west coast and the Tasman Sea just south of Auckland. 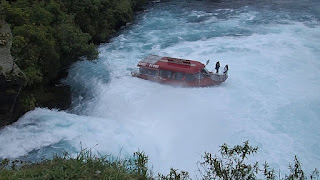 Leaving the Taupo region we ventured south stopping at the Tongariro National Trout Centre for a quick but interesting visit before making our way north for our second last night of the trip in the seaside town of Raglan.

Our final night was spent just south of Auckland  before arriving back to Whangarei where GWTW was waiting patiently for us the following afternoon.

We had a fabulous trip in company with friends Eric and Vandy from “Scoots” who we can’t thank enough for all the laughs, the fun times and the lion’s share of  all the driving. Thanks guys, we can’t wait to do it all again somewhere, sometime in the future. 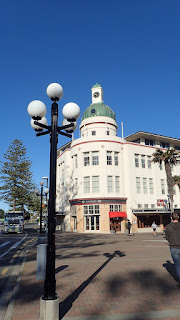