Life in the New World

After lockdown finished the celebrations began.

The marina staff who had entrusted the running of the our marina to three trusted souls in their lockdown absence orgainsed a fancy dinner out at Sails, Whangarei’s poshest restaurant for us, Eric and Vandy from Scoots as well as Dave from Rewa.

Liam was in charge of general maintenance issues, Eric was postmaster, parcel delivery and electrical breakages technician and Dave ran the finance side of things which included washing and sorting laundry and shower money.

Many upgrade projects were hatched during this time and included a major upgrade to our floating party barge to replace the current flooring and turn it into a putting green complete with pro grade AstroTurf. That was a win win for we golfing sailors.

June 19th clocked around and it was a big day on the social calendar.  Pretty much all the boats at our marina from 19 nationalities were “Dressed’ for the occasion . 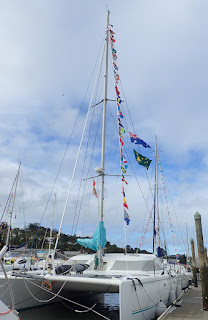 On GWTW each country’s flag that we have visited since leaving Australia in 2006 was hoisted and that totaled 69 flags. Good thing we have a tall mast!  The creative people in the marina painted giant “Thankyou Whangarei” banners which were strung up between the yachts and the scene looked very festive indeed. 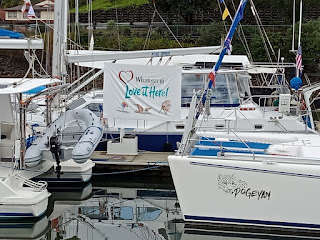 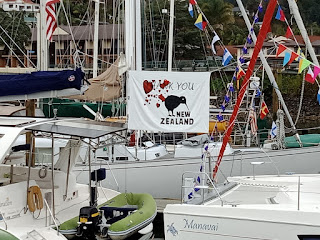 From that day on many a party was organised and yes we cruisers know how to party to the max. The kickoff event was essentially a big  “Thankyou” to the people and the city of Whangarei for hosting the community of International cruisers based here during the lockdown period, and for not throwing us to the wolves when the world was being ravaged by Covid. 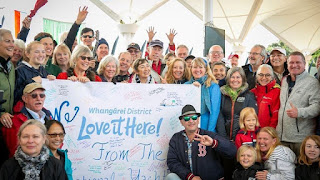 Held on a drizzly Saturday morning under the shelter of the canopy bridge which spans the Hatea River, the Mayor of Whangarei Sheryl Mai, along with NZ Customs & Immigration officers, several of the boys and girls in Blue, members of the public and the local press turned up for the occasion.

One of the  beautifully painted banners now hangs in city’s Council Chambers. 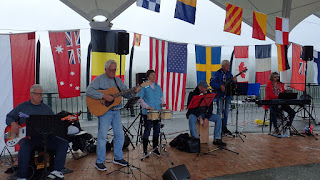 Once the speech’s and blessing of the fleet by a Maori Elder were done and dusted the ‘”Cruisers Band” aka “Riverside Drive Marina Band” filled the air with a string of catchy tunes that even the diehard toe tappers couldn't resist and there was dancing in the streets, well on the bridge to be more correct. It was a great couple of hours.

Later that evening  the neighbouring marina organised a pot luck dinner and BBQ and the band once again preformed . Sunday night the fun continued with the Whangarei Cruising Club being the venue of choice for the celebratory Dinner and Dance night. With over one hundred in attendance we partied hard and danced the hours away.