Life on the Hard….. and then the World Changed !

Once Liam arrived back in NZ at the end of January we only had a couple of days to get our ducks in a row before our haul out at Harbourside Boatworks here in Whangarei.

Months ago we’d done the ground work and had lined up the services of Glenn, who owns Maconaghie Marine, along with his workmate Alister who builds America’s Cup Boats. We knew we had struck the jackpot with this dynamic and talented duo. GWTW would be in excellent hands for her fiberglass repairs, one of which in our anchor locker manifested itself while in French Polynesia, and was exasperated last year on passage from Fiji to NZ.

We figured perhaps two to three weeks work and we’d be back in the water and cruising again. Well as they say, the best laid plans of mice and men….

After consulting with a structural engineer and agreeing with his plan the work began. At this stage I'll mention that we also decided to undertake some work on  a beam on the topside of cockpit roof as well.

This “beefing up job” would be quite technical due to the fact that multiple layers of unilateral carbonfibre strips  needed to be laid which in turn meant for long curing times to finish the job. This would then be  followed by sanding, fairing and ultimately painting.  We also had to build a tent over the back half the boat to give relief from the wind, hot sun and rain and that would take a few days to build before the job could start. 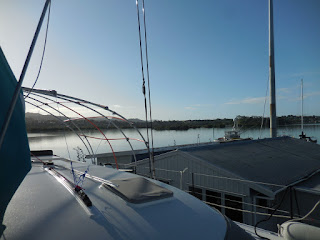 Above and Below : Our tent starts to take shape 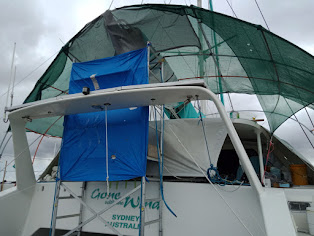 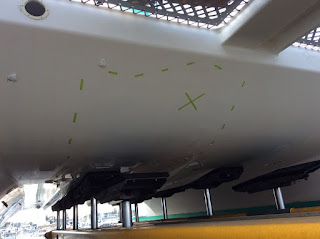 Above : The original area of delamination needing repair & below the completed job before painting. 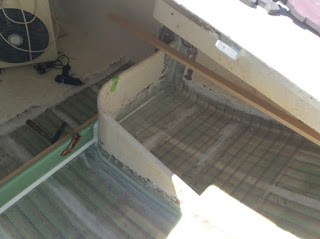 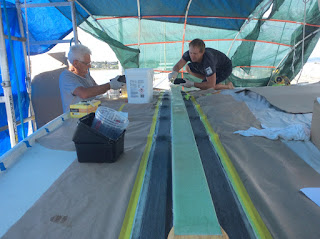 Above and Below : Glenn and Alister building the new beam on the cockpit roof. 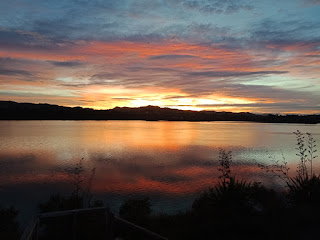 On the odd occasion mother nature brought the boat work to a standstill as the weather was too wet, too windy or just too hot. She was not always in our corner. But sunrises like the photo left made up for the bad days.

Most of the time though the work was coming along nicely and while the boys toiled away with sanders, vacuums and resins, we being mere bystanders improved our golf  by playing twice a week whenever we could as well as having the odd social day out in town and on the water

Above : GWTW is the cat on the left. The photo was taken from Julie and Lee's boat Stray Cat.
As the weeks rolled on news of Covid 19 was increasingly being reported in the media but at this time  we felt it was no big deal being as far away from Wuhan as we were.
Our PM Jacinda Ardern and the Director General of Health, Ashley Bloomfield, had the reigns firmly in hand. They were on the front foot when it came to keeping everyone in New Zealand safe.

But over the coming weeks as we now all know, the sky was about to fall on this planet we call Earth.

Our work on GWTW was moving at a good pace, however the news of a growing pandemic was niggling at the back of everyone's minds. Would the tentacles of the virus reach to the shores of Aotearoa and what would happen if it did. That was the million dollar question.

We didn’t have have to wait long to find out. By this stage we had been out of the water for seven weeks and one day

On Monday March 23rd the PM announced that all of NZ was to translon to Alert level 3 and within 48 hours would move to Alert level 4 lockdown ( the highest level in NZ). That announcement set the nation on edge as well as making for mild panic as everyone pushed the stocks on the supermarket shelves to the limit.

For us, we needed to make a huge decision. Do we stay on the hard for who knows how long or reluanch with GWTW’s work unfinished. We contacted our car rental company saying we may be returning the car in the next two days and they offered  us a fab deal to keep the car during lockdown, from $30 to just $10 per day. I guess any money is better than none for them. But what was the point of keeping the during car during lockdown when you can’t go anywhere. To their dismay we declined the offer.

During the last few hours of freedom we ummed and ahhed re staying in the boatyard but figured the smart call was to make a bee line back to the marina. The remaining work would have to wait and the rental car would be going back. 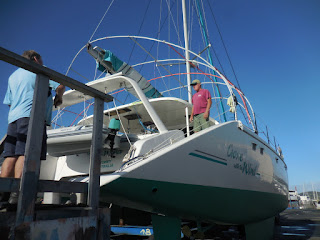 Above : Last chance to change our minds about splashing. 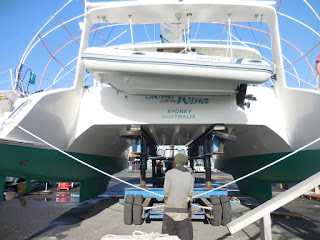 Above : Committed and on the trailer, back to the water we go.

At midday on March 25th we were relaunched with all our tent scaffolding insitu. Motoring back to the Town Basin Marina we definitely got a few odd looks. 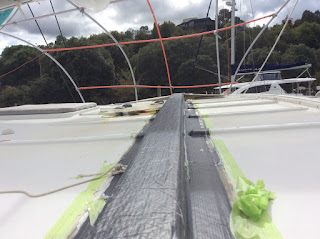 Above : Safe and sound back in the marina with our unfinished beam.

At 11.59 pm on March 25th 2020 life as we knew it changed. The entire country went into lockdown and an eerie silence settled over New Zealand. 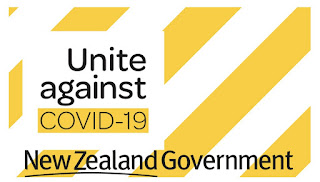