Hanging  out in Hiva Oa, Marquesas

Firstly a few quick facts about these islands: 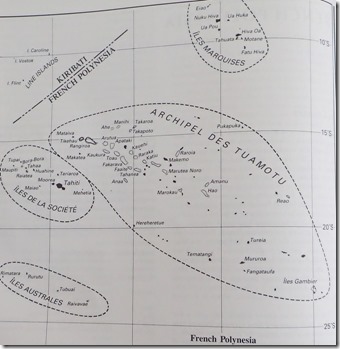 Of the five archipelagos that make up French Polynesia, the islands of the Marquesas are the closest to the equator and are amongst the most remote islands in the world. As a dot on the map they sit 1,000 miles north east from Tahiti and 4,500 miles from the west coast of Mexico which is the nearest continent. These high volcanic islands have no surrounding reefs and are topped by peaks of jagged basaltic rock which stretch as high above the water as they do below.

The  Marquesas is known as “The Land of Men” and the first Polynesians are thought to have arrived here in the 10th or 11th centuries in ocean going outrigger canoes probably coming from Samoa.The isolation of these islands gave rise to a unique and rich culture with its own language, religious beliefs, art and physical features. 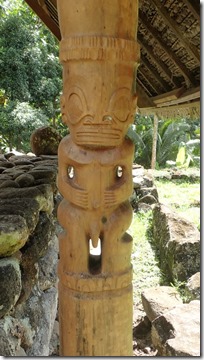 The first contact with “outsiders” came in the late 1500’s when a Spanish ship with Alvaro Mendana at the helm sighted the island now known as Fatu Hiva. The ship continued north to  Montane, Hiva Oa and on to  make landfall on Tahuata.  Senor Mendana christened the four southern islands Las Marquesas in honor of the sponsor of his expedition. Later in 1774 Captain  Cook made his discovery of this magical place which then opened the entire chain  to further expeditions by other nations including the French. Sadly, western influences opened up the islands to disease as well as both cultural and religious changes. The population  of over 100,000 declined rapidly and by the turn of the 20th century less than 4,000 Marquesans had survived. 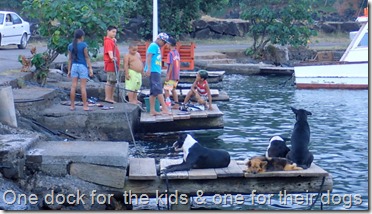 After being in French Polynesia for five days already, we figured it was time we fronted up to  complete our arrival formalities with the Gendarmes.  Most countries are pretty fussy about showing up with all the correct paperwork in hand, which of course we had, but with the French being who they are  our check-in  turned out to be a real non event. They didn’t even want  to see our clearance papers from the Galapagos. I guess they figured we had to have come from somewhere and that somewhere had to be a few thousand miles away. So once that little job was put to bed we strolled through town to get the lay of the land. Checking out what was what sure didn’t take very long, town just ain’t that big.

Atuona  was our first introduction to the people of French Polynesia. It is the capital of the island of Hiva Oa and also the administrative capital for the southern islands in the Marquesas which includes Hiva Oa, Tahuata, Motone and Fatu Hiva. It’s a very laid back, friendly sort of place where most people,  if they have room in their car, will stop to offer you a lift if you flag them down. Some even stop and apologise when  they can’t fit you in. You wouldn’t get that sort of treatment anywhere else I reckon. 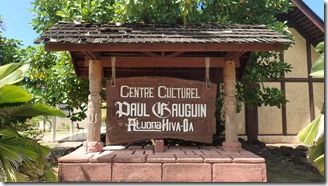 Dwarfed by towering mountains and lush vegetation, the town  made it’s mark on the map when it became home to the famous French artist Paul Gauguin and also the Belgium singer Jacques Brel.  A small museum is dedicated to each man and attracts lovers of their art and music worldwide. Brel won the hearts of the people more so than Gauguin due to his generosity, kind nature and moral standards. He was engaged in community projects and would regularly fly the sick from the outlying islands to Papette  the capital of Tahiti for medical treatment in his private aircraft at no charge. 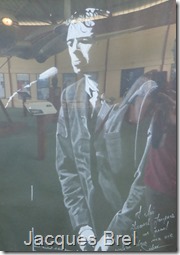 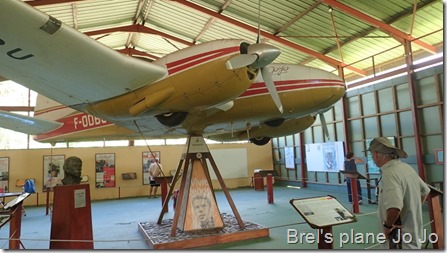 Both men are buried in the local cemetery and even today their grave sties are well looked after by the community. 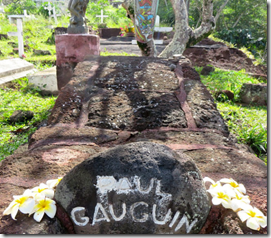 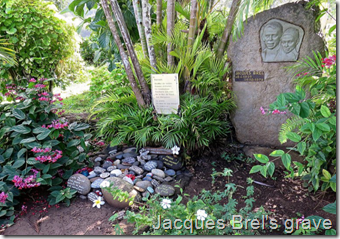 Apart from the  two museums there are a couple of churches, three grocery stores with quite a good selection on the shelves, a post office, a medical clinic staffed by nurses, a pharmacy,  doctors office, an Air Tahiti office and Snack Make, a café/bar/restaurant which is well patronised by cruisers due to the lure of free “snails pace” internet. 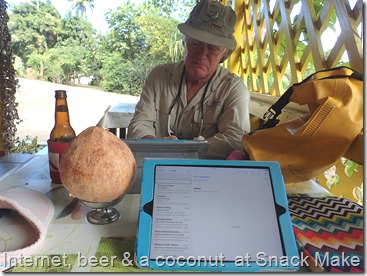 Well you do have to buy a drink or something to eat so I guess it’s not technically free. The only fuel station in town is conveniently alongside the harbor anchorage, the office doubling as a general store selling fresh baguettes every  morning as well as a good selection of veg and staples at roughly the same price  in town.

We’d heard from fellow cruisers about two two brothers  Pifo and Bligh who did day tours of the island and it all sounded quite good. Given that everyone in town knows everyone or is a cousin or related by marriage somewhere along the line it didn’t take long to track down a phone number and sign up for a tour for the  following day. 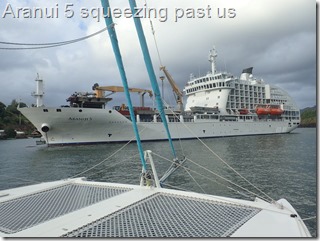 We were to meet our guide at the gas station on the dock at 8.30 just after the cruise ship-come-cargo ship Aranui 5 arrived in port. This ship sails from Tahiti and does the rounds of the Marquesan Islands and the atolls of the Tuamotus every three weeks, so it’s a pretty big event when it comes to town.

Sleepy little Atuona  was suddenly buzzing. Camera touting tourists wearing colourful frangipani necklaces  milled around the small wharf area waiting for their prepaid rides to arrive, while the onboard cranes got down to the business of playing Santa Claus for the lineup of eagerly awaiting Hiva Oans . Everything from fresh produce to washing machines and racing outrigger canoes to brand new pickup trucks was offloaded. It was quite a sight. 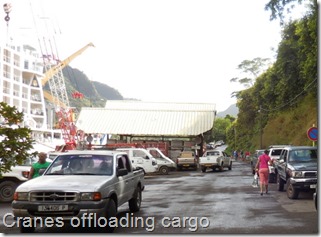 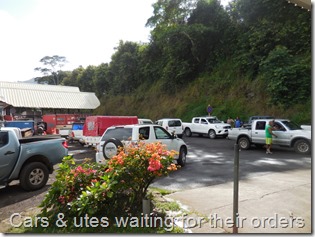 Amid the chaos of disembarking passengers and strutting roosters our guide  Pifo arrived and we piled into his ute. In company with two other tourists we headed inland and up the mountain for 10km before arriving at our first stop, an archeological site hidden way off the main road amid lush vegetation. 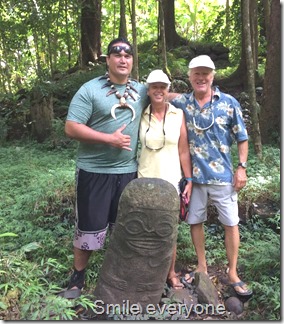 Walking down a muddy track we veered off into  the donga and eventually came across a  small clearing. There in front of us stood  a one metre high statue known as the Smiling Tiki. Yes it really was smiling and he was  looking mighty pleased with himself. Pifo gave a short history and the significance of the site and then it was back to his ute  to continue our journey.

Climbing ever upward  we  passed a substantial number of horses and cattle grazing by the roadside and believe it or not masses of pine forests. Who’d have thought you’d see pine trees in the tropics! The seedlings were imported  years ago and now the mature trees are felled for the usual stuff like building materials, telegraph poles, fences and so on. 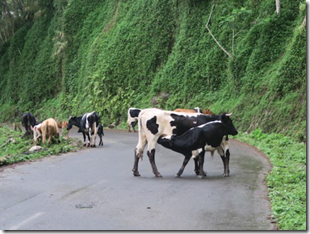 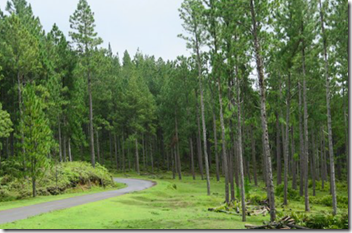 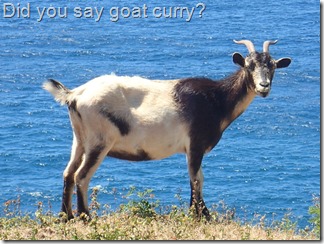 We had multiple photo stops along the road before starting our very bumpy decent down the switchback dirt road to the north and then eastern side of the island. Much of the Hiva Oa’s fresh produce is grown up here with a plethora of banana, mango, papaya and pamplemoussee, a sweet tasting  type of grapefruit on steroids as well as  breadfruit which is the local substitute for potato. More “exotic” fruit and veg which are not usually part of the Polynesian staple diet such as potatoes, oranges, pear, lettuce varieties and avocado, come via ship from Tahiti. So if you are a cruiser don’t hold your breath for all the regular produce we normally take for granted. 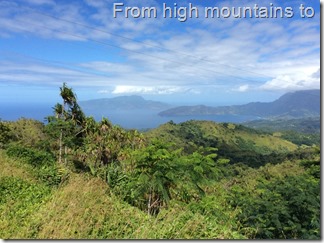 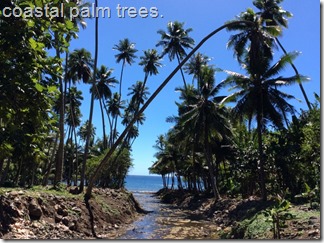 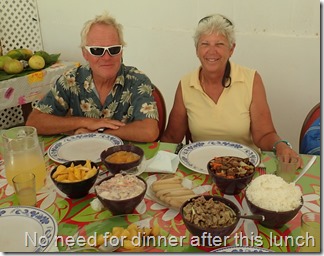 Continuing along the scenic east coast our lunch stop was at Pifo’s cousins house in the village of Puamau. The owners had prepared an absolute feast for the five of us with dishes including curried goat, pork stew, poisson cru, a raw fish dish marinated in lime juice with a delicious coconut sauce, breadfruit chips, mountains of rice and a desert of glazed bananas and fresh watermelon.The servings were enormous and I tell you we waddled out of there full as a goog. 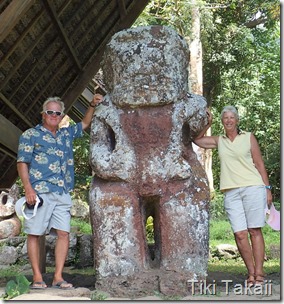 Next up on the tour was the main event, the archaeological site of Iipona said to be the best preserved in all of Polynesia. Here we were joined by Pifo’s brother Bligh and his tour group. Along with sacrificial platforms and alters, the Marquesan's were known to be cannibals in days gone by, there were  also five tikis with Tiki Takaii, named after the warrior chief the largest in French Polynesia. We spent quite a while here taking in the sights and the peaceful surrounds. 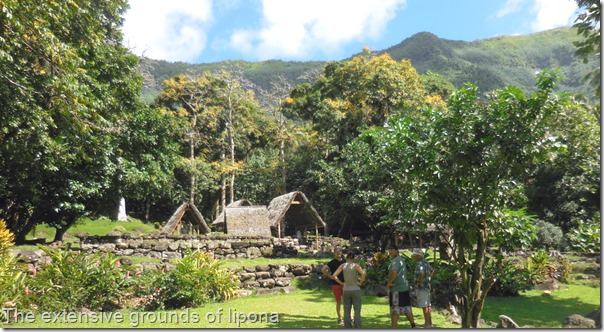 Then it was time for the menfolk  of both groups to learn the  moves of the Marquesan Haka. Our guides had come prepared with traditional drums, ukulele’s and horns. The boys were quick learners and had it all down pat in 15 minutes putting on a fine show with much gusto for we attentive women. 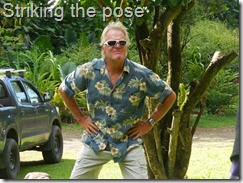 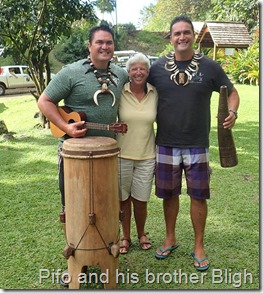 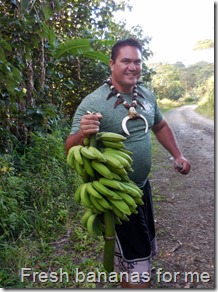 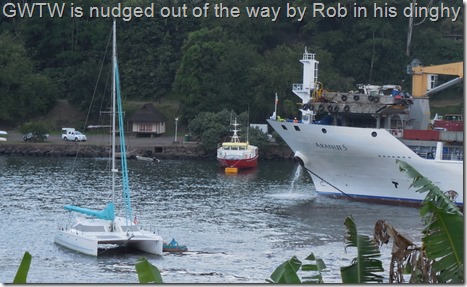 The trip back to town took another two and a half hours  along the same bone jarring road stopping only for Pifo to cut down a hand of bananas which he’d promised to get for yours truly. Back in town we arrived to see the Aranui 5 pulling out from the dock and a dinghy duo from the yachts Southern Comfort and Restless pushing GWTW out of the way as the ship swung her bow to leave the port. 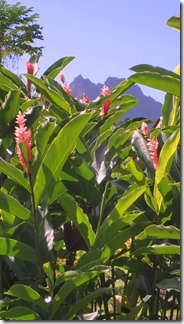 We stayed in Hiva Oa a couple more days but the horrible swell  and the near impossible-at -imes dinghy landings in the small harbour won out in the end, and we left to go back south to the island of Tahuata for some respite.

With Liam’s eye not improving and the only doctor in Hiva Oa now on holidays for two weeks our only option for further treatment was to sail north 125 miles to the island of Nuku Hiva, where we knew they had a substantial hospital. So that’s what we did. Medical issues cannot be taken lightly when you live the life we lead.