Just as the dawn started to break the heavens opened. We have not had a decent downpour since leaving the Galapagos and it was a welcome change. The decks and the cockpit got a well needed free washdown.
Sunrise today wasn't all that exciting but it was a special moment in time heralding the final day of our passage across the eastern Pacific Ocean.

At 0830 the mist ahead cleared and there in the distance was the faint outline of the hills of Hiva Oa. The feeling of elation was quite overcoming. Two boobies and a pair of frigate birds soared across the sky at mast height looking magnificent. They were clearly lining up to land on the top of our mast amidst all our wind gear and antennas and we were clearly hoping they wouldn't. After many aborted attempts they gave up and went back to looking for their breakfast.

The sun was shinning and patches of blue were peaking through the clouds. A rainbow shimmered just a few miles off our port side. The shores of Hivo Oa looked steep and craggy with ragged peaks jutting skywards from the lush vegetation clinging to their sides.


The wind and sea gets squeezed through the skinny gap between Hiva Oa and Tahuata causing some extremely large waves to mount up. Me thinks that it's much better to keep the eyes focused straight ahead at this point. With the main still hoisted GWTW surfed down the face of the liquid mountains like a real pro.


Having had enough fun we turned the bows into the wind and dropped the mainsail. It was time for the workhorse to have a rest. It was only once the sail had been dropped that we realised the outer sheath on the halyard had let go. It looked just like a fallen down sock on a seven year old's shin and was crumpled on top of the headboard...bugger. We're thanking our lucky stars that that didn't happen a thousand miles ago. We would have been in deep do-do if it had. 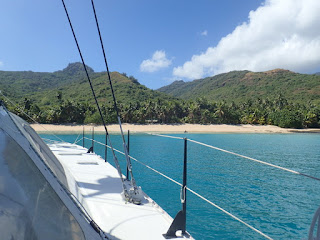 Coming through the gap we were escorted by a couple of dolphins. One was extremely talented as he leapt out of the water amidships, did a tail stand and then propelled himself forward at least twenty feet through the air before flopping back down on the water. This wasn't a once off he repeated this trick several times In all our sea miles we have never seen a dolphin do that.


Once clear of the passage we turned south and headed into beautiful Hanamoenoa Bay. Palm trees, white sand and clear water.


At midday Marquesas time the anchor chain rattled to the sea floor and the anchor dug in.
It was  over. We had arrived. 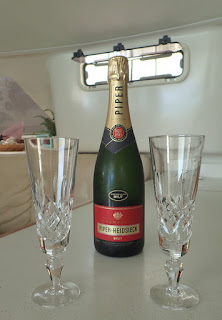 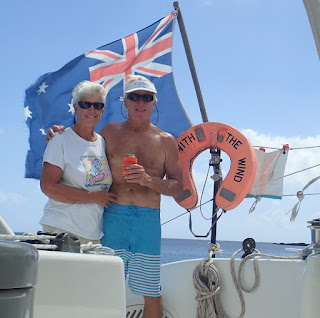 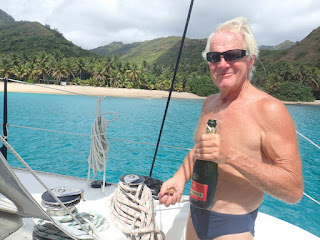 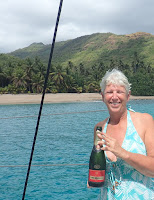