Back to the land downunder again

My how time flies. It seems that we had only just landed and then we were back on the flying kangaroo retracing our steps east to the USA. Not wanting to bore you with the usual garb about what we did while back in OZ this time,  I'll write the expedited version, well sort of  with one or two exceptions.
We caught up with all the rels, my sister Helen and beautiful niece Bridget, Liam's kids and grandkids as well as our friends both in Sydney and on the Gold Coast. Thrown in the mix were lots of coffees, lunches and dinners, probably way to many actually. The scales are never kind to us when we are back in Australia and sadly they never lie. 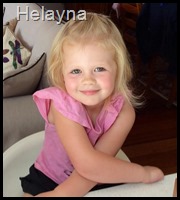 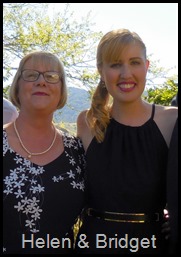 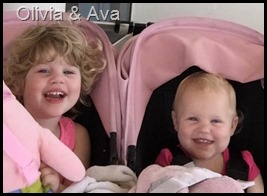 We did however have a few standout highlights and a couple of low ones during our trip this time.

The first was a face to face meeting with Tracey, who is the latest edition to Liam's family. No, she's not another grandchild, she is his daughter and his first born at that.
Many, many moons ago when Liam was sewing his wild oats as a young man he became an unexpected father. The girl he had been dating disappeared off the scene and nine months later a baby girl was born.
For reasons known only to herself her mother put the baby up for adoption immediately after the birth and the birth certificate stated that the father was unknown. Shortly after, Tracey was adopted and  she was raised by a very loving family in Newcastle. Due to the  Australian adoption laws at that  time  all parties involved in the adoption process were denied any sort of contact details of each other. That all changed in 1990. From that day on she started her 25 year search for her biological father, Liam.

Susan, Tracey's biological mother, kept her secrets close to her chest. Tracey had asked her many times over the years for any snippet of information about her birth father and although she’d kept tabs on Liam, she was not willing to share her knowledge with her daughter. Then one Sunday night  a couple of months ago Tracey saw a television commercial for ancestry.com and she again contacted Susan asking the usual questions. Just hours later Susan sent her a text with an attachment.  The attachment was a photograph of our boat.

That night sitting in Georgia on GWTW thousands of miles away our phone, followed closely by our iPad, made the familiar ding signaling incoming mail . 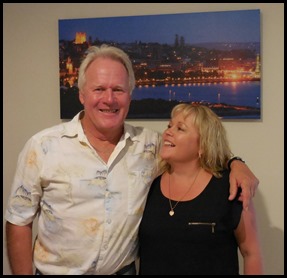 After a quick bit of research on the internet, Tracey found our sailing blog site with it’s attached email address. She set about composing a very detailed and no doubt emotional letter, introducing herself in the hope that she would get a positive response. Her long hard search was over and she had finally found the man she'd been looking for.

Liam took the news well, although there was a certain amount of shock which a few chilled glasses of wine certainly quelled. Father and new daughter set up a FaceTime chat which resulted in waves of tears from both sides.  The rest is now pretty much history. We’ve met Tracy's partner Ben, as well as her two adult children Sofie and Sam. They in turn have also met Liam's other three children. The resemblance of his now clan of four is quite remarkable. He quite obviously has very strong genes. 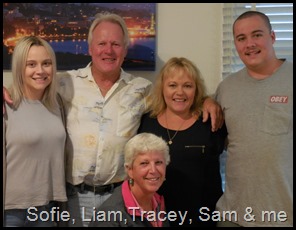 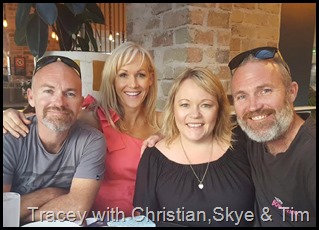 The other important engagement was on my side of the family with the marriage of my nephew Glenn to his long time girlfriend Jess.  The wedding held at  Silos estate, an upmarket winery and restaurant in Berry on the south coast of NSW, was simple, elegant & stylish. The weather gods cooperated in full and the venue and of course the bride were all picture perfect. 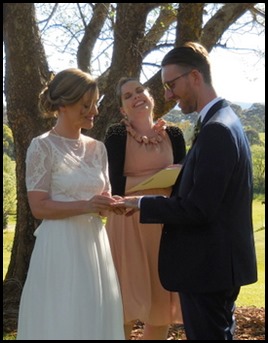 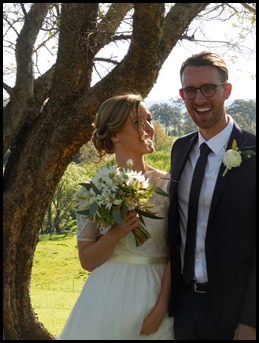 Sadly, Liam had contracted a very bad dose of the flu and only managed to survive through the ceremony before giving in to the lergy and returning to our accommodation for the rest of the evening. He was less than excited that he had to give up an excellent meal and wines in lieu of his health.  Have to write that one in the log! 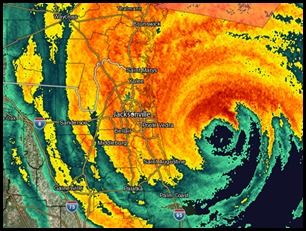 Also, while back in Sydney, a very nasty little piece of weather named hurricane Mathew decided to pay the US east coast a visit. That visit included south east Georgia where GWTW was resting in her berth at Brunswick Landing Marina.

Mathew came roaring up from Haiti along the east coast causing a wake of devastation not seen for many years. We watched his progress as nervously  as pigeons with a cat in the loft and debated whether we should jump a plane and head back to our home. But our call on that front came too late as Mathew bore down on Brunswick. A mandatory evacuation was called for the entire town by the police and all our friends got the heck out of dodge, scrambling to find accommodation as the hotels west of the I95  freeway filled to capacity. Some even had to travel across state lines into Alabama to find shelter. 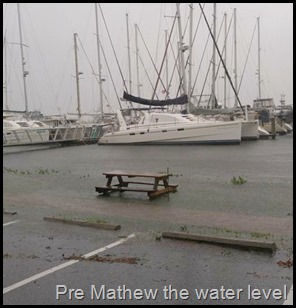 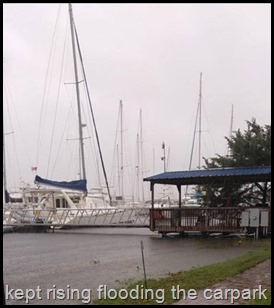 GWTW was all alone at the mercy of the weather gods along with the other 250 boats in our marina.  We watched Mathew on many reports as we could via the internet and US television news. As the storm approached and  torrential rains and winds of 85 mph/140 klms ph/ 74 knots hit  Brunswick and the surrounding area, water levels rose and the slips and boats were a mere 3 ft from floating off their posts. It was a disaster of enormous magnitude waiting to happen.

Luckily the eye of the hurricane stayed a few miles out to sea and with that the wind shifted and sucked the imminent  high tide and surge back out with it. After many phone calls to friends it seemed that we had been spared the brunt of the hurricane which then continued its destruction through the Carolinas. The only damaged we sustained was the loss of a solar panel which was ripped off our targa bar. Miraculously, it had landed in our dinghy dangling by its electrical cord, still in one piece and working. Sadly, some of the other marinas and boat owners close by weren't so lucky. 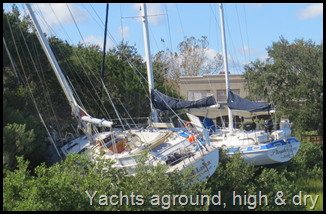 The town and surrounding area was hit hard with  thousands of downed oak trees, power outages, flooded homes and businesses and loss of lives. Our hearts went out to all those who lived nearby the town we'd called home for over a year. 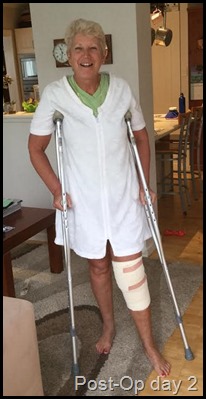 Meanwhile back on the health frontier we both got clean bills of health from our respective specialists. That was a good thing. Then one afternoon while doing a spot of gardening at Pete's  house I twisted my knee resulting in a badly torn meniscus. With the public health system being what it is in Australia  and the extremely short and rapidly closing window of opportunity for treatment before our departure on November 1st,  there was no choice  but to self fund and go down the pricey private patient route. Deja vu from last year with Liam's cancer treatment.

So 10 days before departure I fronted up the Mater hospital for knee arthroscopy surgery.  The procedure went well with a recovery time of six to ten weeks. A rather interesting concept when you live on a boat, to say the least. 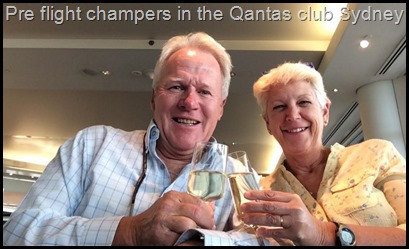 The flight back to the US  this time was way more bearable than the last thanks to a former flying colleague of mine from Ansett who is now a cabin manager with Qantas. He moved us to some "better quality”seats in the upper deck which was poles apart from our original seating in row 84 at the back of cattle class. We hadn't seen each other since the collapse of Ansett back in 2001, and it was nice to see that he earned his stripes and was now in charge of the cabin crew on the massive Airbus A380 aircraft.

The 16 hr flight  to Dallas finally came to and end and we boarded our next  3hr flight to Jacksonville where we wearily checked into our hotel and slept like babies. Next morning we collected our rental car and drove the final 56 miles back to Brunswick GA and GWTW. As always it was great to be back home again. 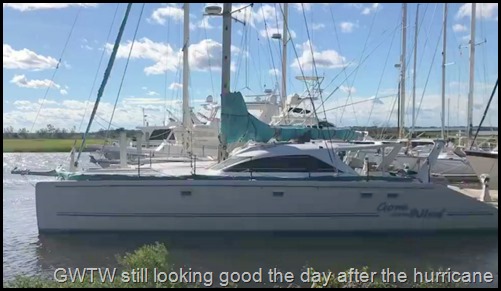