Sailing tradition says that you should never leave port on a Friday. Maybe it’s an old wives tale but ask any cruiser and you’ll get the same answer .It’s just bad luck to leave on a Friday! So we hung out in Miami for just one more day. Saturday would be moving day. 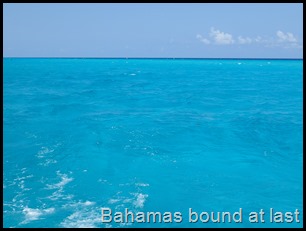 Leaving Miami in our wake it was heaven to be out in the deep blue waters of the north-flowing Gulf Stream, sailing east to the Bahamas. It really did seem like a million years ago since we’d raised our mainsail and unfurled our jib. A light southerly of 10 knots pushed us along and the Gulf Stream was as flat as a pancake. We were lucky to have such good weather for our crossing as it can get pretty gnarly on that 50 mile stretch of water when the wind is from the north or the east.

With the wind due to increase from the south and then move to the southwest our landfall target was horseshoe shaped Honeymoon Bay at the north end of Gun Cay, ten miles south of the main entry port of Bimini.

The Bahamian officials are pretty laid back so we figured we’d chill out at Gun cay ‘till Monday and then toddle up and check in. Gun Cay was a new destination for us and we were looking forward to it. The guide book gave it a good wrap and we hoped that there would be room for us to anchor as it reportedly got a little cosy on the weekends when the sportfisher crowd zoomed across from Miami to party on this uninhabited cay. 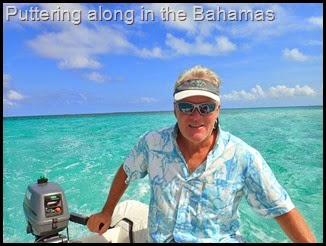 With the powerful Gulf Stream current giving us a  good boost we were on target to arrive around 1700. Following the written advice of those who  have gone before us, we entered the cut between the rocks and lined up for what we thought was Honeymoon bay. We could see six boats already at anchor and it wasn’t until we were nearly past the point of no return that we realized that we were actually abeam of our intended destination, which looked nothing like what our charts showed. The boats we could see were  anchored on the east side of the cay and not in Honeymoon Bay. Having slowed our speed to idle while we took stock of the situation we were both a little confused for a few seconds. And that’s when it happened.

At that moment the incredibly strong current that was rushing through the cut grabbed us, pulling us in and sliding us sideways towards a shallow rock platform and a  very lethal looking rock.The front of the port keel made a dull thump as rock and fiberglass made contact and GWTW gave a little shudder.  It took all of  Liam ‘s expert boating skills, a few quick prayers to the man upstairs and our two powerful 75 hp Yanmars using all their might to back us out of an imminently disastrous situation. What seemed like minutes passed before those 150 horses dug their heels in to overcome the swift waters and we inched away from the dangers lurking ahead of us. What a great start to our Bahamas cruising season that could have been!! 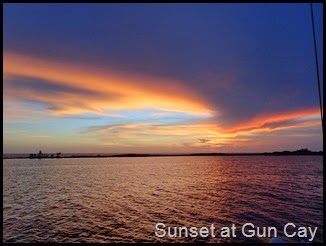 So a quick regroup and with tail between our legs we turned south and rounded the bottom of Gun Cay, sneaking up the west side to  join the other boats in the calm anchorage. Liam checked out any damage to the keel from our up close and personal and was happy to report that it was just a little bruise to the antifoul. Having had enough excitement for one day we adjourned to our roof top patio, also known as the boom, to enjoy the first of many beautiful Bahamian sunsets. 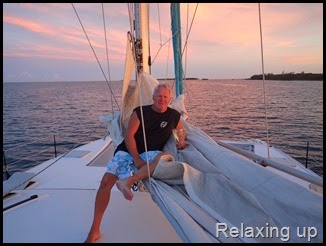 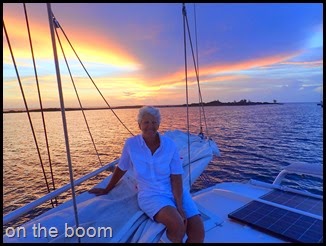 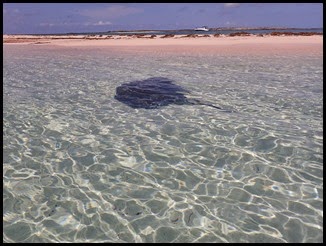 Gun Cay is home to some playful stingrays who follow you like puppies along the shallow beach waters in hope of getting a free feed. Fact or fiction we decided to jump in the dinghy and head to the beach to check it out. As soon as our feet hit the sand a bunch of them appeared out of no where. It was a little spooky really. 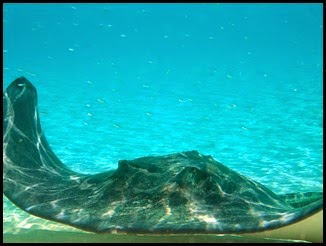 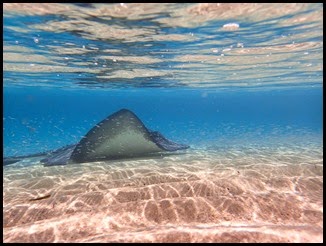 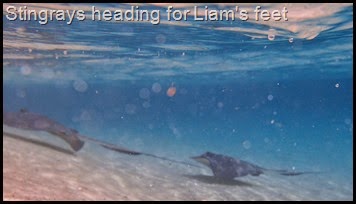 We had nothing to feed them, after all what do you feed a stingray? Anyway that didn’t stop them and they hung around the whole time we were there, and  I did get a few good pics. Later the same day we chugged up to the wreck of the Sapona, an old concrete boat which met it’s demise during a hurricane. The snorkeling was said to be good with thousands of fish calling the hulk home. Sadly the wind had increased by the time we got there and the waters were too rough to dive in, so all we got were the above water shots. 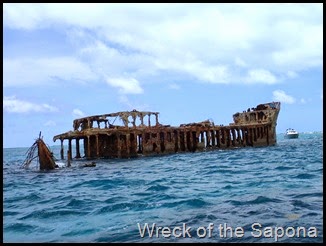 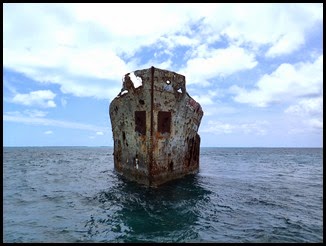 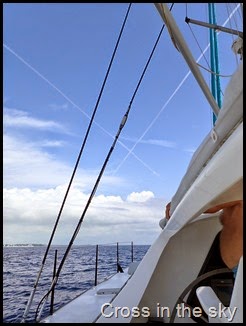 After a mid morning check in with customs and immigration and parting with US$300 for the privilege of doing  so, we decided to continue on across the Great Bahamas Bank and sail until sundown when we would anchor literally in the middle of nowhere in 12 ft of water. With  no land within 50 miles it’s a little eerie as night falls knowing that there is no one and nothing around you but flat aqua water and a zillion stars above.The following day we had a great sail under main and screecher. As we left the shallow banks and once again sailed into deep water an unusual cloud formation painted a big cross in the blue sky ahead. Was it a sign ??

Not long after, the sky darkened and a big squall lasting around two hours hit us. Luckily it was only heavy rain and no associated wind, but as it was a total whiteout we did circles out the front of Little Water Cay until it had passed.

We stayed at Little Water Cay for a few days, the clear waters giving us a good opportunity  to swim and to clean the bottom of our hulls. The cay is a private island complete with airstrip and is owned by a British family. According to the property managers the owners visit maybe twice a year but keep a full staff on hand at all times. Part of the property, well it’s a stand-alone house, is available for rent for $17,000 per night and that includes your own personal chef. Anchored just off the shores of the cay it was wonderful to hear the calls of the resident peacocks at sunrise and sunset . We’ve been invited to tour the property next time we are there so you’ll get to see the photos then. 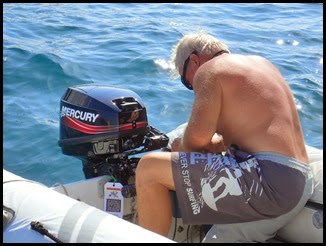 A quick trip sail down to Nassau, thirty miles away saw us buying our long awaited Mercury 15 outboard engine. This would be the second one since leaving Sydney in 2006. The back up 3 Yamaha had served us well but it was time to get the big guns back on the family car. We like a bit of speed. 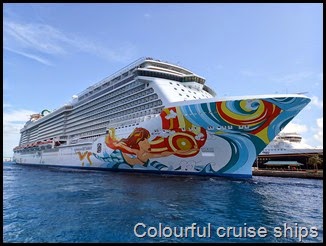 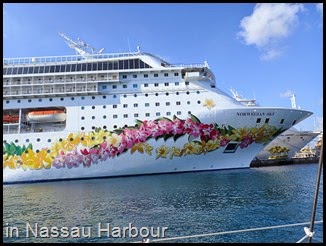 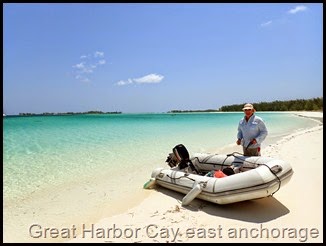 From Nassau we headed back to the Berry Islands this time calling Great Harbor Cay home for a week. Anchoring in the large bay on the eastern side was like a dream come true. If there was such a thing as the quintessential Bahamas anchorage then this is it,. We both agreed that it is the probably the prettiest anchorage we have ever spend time in. There’s not much happening at GHC. Mostly it is a holiday island with lots of pretty coloured houses, a small community and a couple of good restaurants, one of which is at the Carriearl  Boutique Resort ,where we’ve had lunch and plan to have dinner this evening. Run by a British couple it’s a popular spot with the  the boaters and the jetsetters. 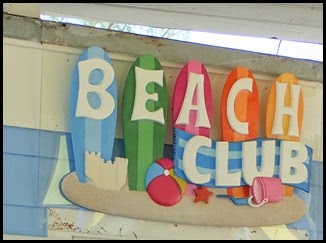 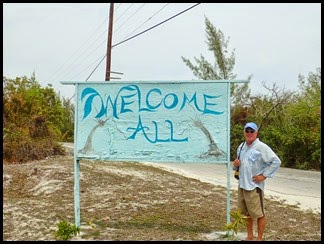 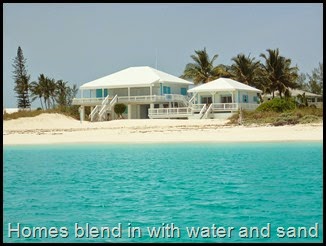 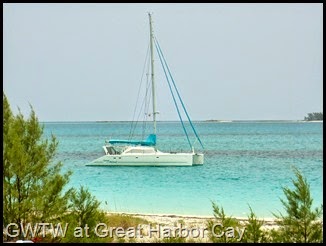 So now you are up to speed with where we are and what we are doing which really isn’t much at all. Just kicking back and pondering what boat chores we might do tomorrow or maybe the next day.

Cruiser’s Info: Nassau : Anchorage on west side of Paradise Island Bridge past the Cruise ship docks good holding in sand. Secure dinghy dock at the Bay St Marina, sometimes charge $5 per day, easy access to town and the Green Parrot Restaurant  next to marina with Free Wi –Fi

Eating out  :  New Beach Bar  in the anchorage has good burgers etc and  free Wi –Fi. Carriearl  Boutique resort further up the beach has a good menu, open for breakfast, lunch and dinner Wed – Sat, Sun brunch . More $$ than the beach bar but better food and service. Free wi-fi for patrons

General : 20 minute walk to GHC marina from the anchorage and a further 20 min walk to the settlement in Bullock’s Hbr