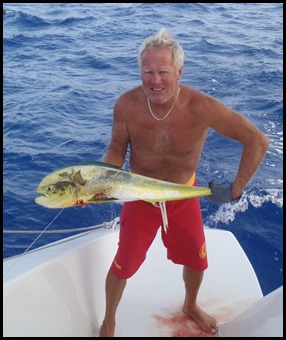 An overnight sail took us from our final anchorage in the Berry islands, Bahamas across the Gulf Stream and into West Palm Beach in Florida. It was a pretty uneventful sail with the wind coming from the ESE at 10 – 12 knots. Our fishing lines had been trolling behind us for hours without a single nibble and then, just on dusk, Liam landed a really good size Mahi Mahi. He was over the moon, but I sure don’t think that the poor fish was. After the usual tasks of dispatching, filleting and freezing our catch we were on our way again, not that we had slowed down at all during the whole process.

It was a darkish night with a couple of ships about and the odd thunder head, with lightening flashes on the not too distant horizon. Ships, but particularly storms, always keep us on our toes and as a precaution all our precious electronic gear was hastily put into either the microwave or the oven. Now you might think that’s a bit of a loopy thing to do, well actually it isn’t. In the case of a direct lightening strike, or even one that hits the water not too far away from the boat, the static electricity generated in the air will often “fry” modern gadgets that run on battery power. That includes cameras, phones, chargers, back up navigation and communication systems and spare computers. The theory is that the microwave will act as what is known as a “Faraday case”, and stop the destructive static electricity from coming into contact with the essential things we need for our everyday use living on a sailboat. Not ever having had to put the microwave oven theory to test, we religiously unplug it from the power point and cram it full of stuff, always keeping our fingers crossed when there are storms nearby.

West Palm Beach is one of our favourite places in Florida. Everything is in easy reach. The Publix supermarket is just a 10 minute stroll away and the free trolley bus stops right outside, making carting all those heavy groceries home to the boat a breeze. There is always something to keep us entertained, whether that be the Saturday morning farmers market in the park across from the anchorage, or Duffy’s sports bar to keep you-know-who up to date with all the football games. For me it’s the choice of well priced restaurants, good window shopping and the excellent Mandel public library. 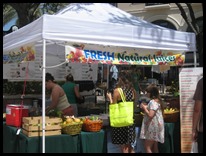 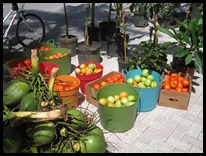 We spent just over two weeks here and amongst other things caught up with friends Bob and Lorraine from S/V Scaramouche, and were lucky enough to have front row seats on the bow of GWTW for the spectacular 4th of July fireworks. 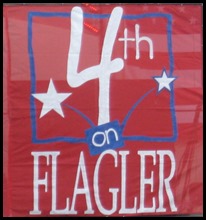 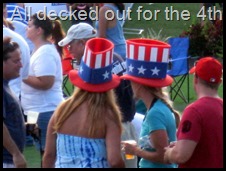 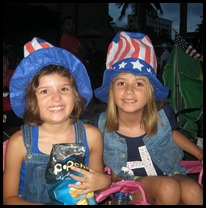 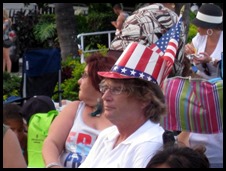 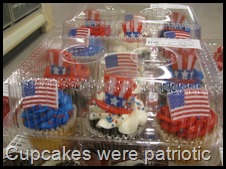 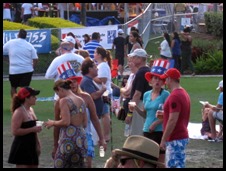 Our next stop along the coast was Fort Pierce just 40 miles up the road. We hadn’t stopped here before and were looking forward to visiting somewhere new. Unfortunately we didn’t get to see much of town as the weather was not that inviting to go exploring. Listening to the TV news that evening came something that we didn’t want to hear. Hurricane Chantal was heading our way and if she didn’t change direction was due to make landfall in Florida in a few days. Fearing the worst we made enquires at the local  boat yard as to whether they could haul us out at short notice if it came to that.  Luckily in the next 24hours Chantal turned right and headed back out to sea, much to our relief.

A very unexpected surprise  came when we tried to lift our anchor the morning of our departure. During our short stay we’d been anchored in very shallow water, 6.5ft, just outside the Harbourtown Marina. We were just about on the bulls eye where the Intracoastal Waterway (ICW) meets the ocean inlet to Fort Pierce. As fast flowing currents rip through this area GWTW was rarely still, sailing around her anchor at each turn of the tide. The result was a massive tangled knot in our anchor chain which prevented us from getting the anchor back on board. 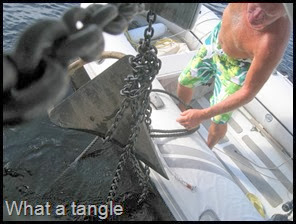 After launching our dinghy, Liam, with the aid of a fellow cruiser, had to disconnect our anchor from the chain while yours truly motored the boat in circles. Between them they man-handled the mother of all metal knots until all the twists were gone, and that’s not an easy thing to do. With the mess straightened out they reattached the anchor so that it could be stowed properly on the bow roller. So much for an early start to our next destination .

St Augustine was a mere 150 miles further up the coast which meant an overnight sail. Conditions were pretty good. There was no moon to light the way but a nice ESE breeze of around 12 knots gave us flattish seas and a comfortable ride. We arrived into St Augustine at sunset the following night as a huge storm was about to hit. Grabbing hold of one of the municipal marinas’ mooring balls the squally winds hit us and the bay became a total whiteout. We spent 3 days here, did a city tour and beached the boat to remove the plethora of barnacles that had taken up residency on our hulls. The three coats of Micron 66 antifoul we’d put on just six months earlier in Trinidad had proved to be totally useless. 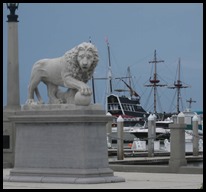 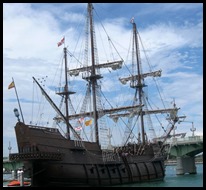 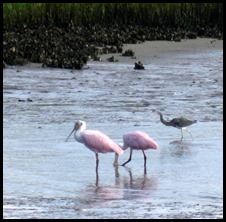 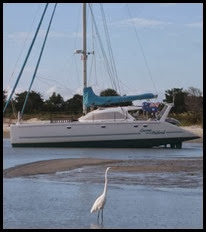 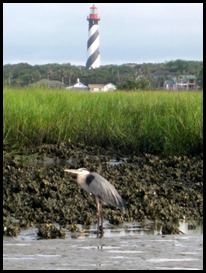 Two more stops were on the cards before reaching Beaufort Nth Carolina. One was a day sail of 70 miles to the St Mary’s inlet where once inside the wide river entrance, we pulled off to the side for the night.For company we had a fishing trawler that followed us in through the inlet. No doubt he was glad to be out of the rough conditions as we were. 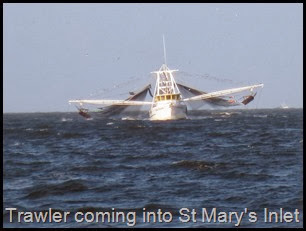 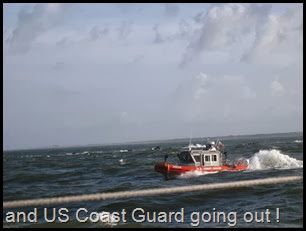 From there it was a walk in the park to cover the 25 miles to St Simon’s Island, which sits a few miles short of the township of Brunswick in Georgia. Anchoring in a backwater off the Golden Shores Marina again we were  affected by rushing tidal currents. It seems to be the way wherever big rivers merge with inland creeks, marshlands and the ICW and once again we had anchor problems, but this time of a different type. We were fine for the first two days, leaving the boat during the day and walking to the supermarket and into town for a spot of lunch and a little sightseeing. 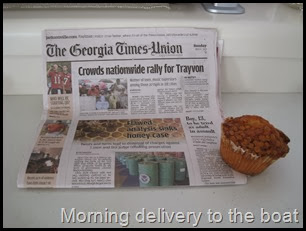 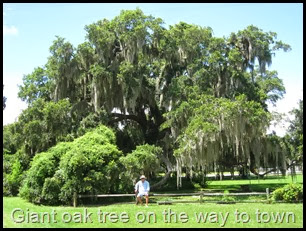 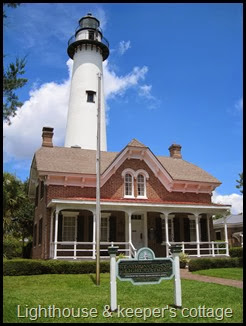 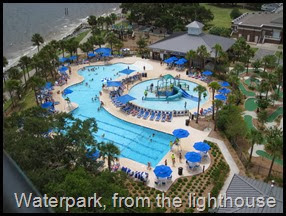 Then on the third day we somehow snagged something on the bottom, a submerged object that our chain wrapped around so many times it eventually pulled the anchor out. We dragged a couple of boat lengths and then it reset itself. This had a bad feel about it and either way we couldn’t stay where we were. Trying to raise the anchor was fruitless, we were stuck fast on whatever lurked on the muddy bottom. Liam donned his scuba gear to investigate but the current was so strong he couldn’t even swim to the front of the boat. After waiting for slack tide, which seemed to take an eternity, he felt his way down through the murky waters doing everything by brail till he literally bumped into the problem, some sort of derelict pole. We toyed with the idea of marking where the anchor was with a buoy and dumping the whole 300 ft of chain overboard, but after much discussion and on his second attempt he managed to free us. With shattered nerves and an afternoon storm fast approaching we did the smart thing and went into the marina for the night. As we were leaving for a two night sail the next morning we sure didn’t want the same thing to happen again. It was a good move accompanied by a good night’s sleep. 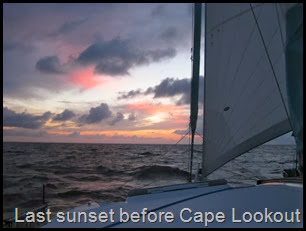 The following two nights at sea gave us a mixed bag of sailing conditions and weather. We went from flat gentle seas to choppy and rough to big following seas of 6-8ft in height. The moon was full so we could see the direction of the waves and there were plenty of squalls all around us. As much as we are pretty used to it the odd thump of flying fish landing on the decks and in the cockpit, it still gives us a fright, and there were plenty of thumps. At 0400 on the second night or rather morning we hit speeds of 15+ knots. With only 50 miles to go we were both looking forward to getting into the protected anchorage of Cape Lookout. We have stopped here a few times before and knew that it was a lovely spot to spend a few days. Just a few hours later we dropped the pick in the calm horseshoe shaped bay. This would be where we’d start decommissioning GWTW for the season. It was also our last anchorage until we’d return four months later. 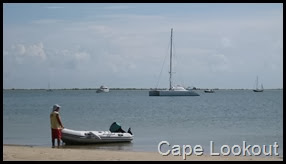 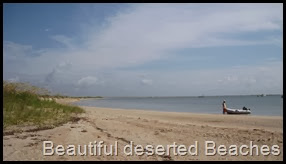 We spent five lovely days anchored at Cape Lookout, doing chores, swimming and walking the long beaches. Eventually it was time to leave and head inland up the ICW to Jarrett Bay Boatworks where GWTW would be hauled out for the remainder of the hurricane season. After having two days on the dock at Jarrett Bay tidying up some loose ends, haulout day was upon us. Lifting GWTW went well. The yard and travellift operators were very careful with our home and very professional. The hardstand area was huge and there were at least ten other cats around our size already in the yard. 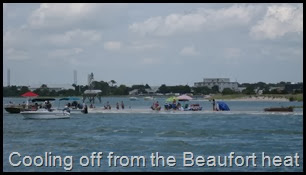 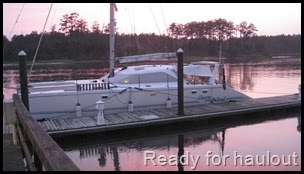 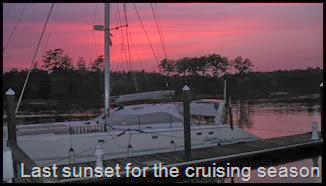 We spent our last night on board and next morning, after the usual last minute rush, said goodbye to our girl and headed to the New Bern airport. The big silver bird would deposit us in  Portland Oregon where we’d catch up with long time cruising friends Bob and Becky who we sailed in company with since leaving Australia in 2006.

Email ThisBlogThis!Share to TwitterShare to FacebookShare to Pinterest
Labels: USA 2013