Our two day stop in St Maarten was hard work for Liam and I. 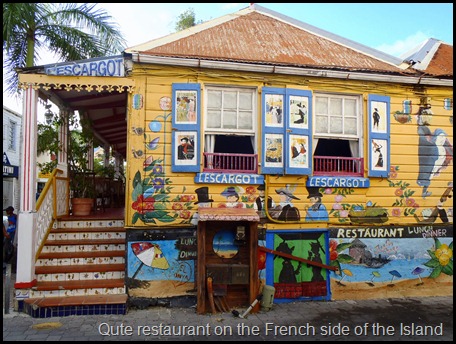 On day one, after dropping Helen and Bridget over to the French side of the Island for some sightseeing, our day was spent going from chandlery to chandlery in search of new anchor chain.Three hundred feet of it to be exact.The old one which had served us well since buying it in Turkey back in 2010 had gradually rusted to the point where it was damaging our Muir windless  each time we raised or lowered the anchor. We had looked at replacing the chain while in Trinidad, but as we quickly learnt, not all chain diameters are the same. USA manufactured chain differs from the rest of the world, and the one that we needed to fit our windless we couldn’t source in Trini. Many phone calls and emails later we were pretty sure that we could buy the right one in St Maarten. As it is essentially a European country, the chandleries import the same type of chain that is available in Australia where our windless was made. Now for those non sailors out there you might think what is all this rambling on about chain. Well the windlass, chain and the anchor on the end of it work together and are the brakes of a sailboat, or in our case our home. The windlass is a powerful motor that drives the gypsy, a sort of drum that has cogs on it much like a paddlewheel, and picks up each link of the chain to drop or raise the anchor. So as you can see it is pretty important that you get the correct size chain for the whole process to work. That way we can sleep well at night.

Finally we found the right chain and, after much toing and froing to the boat to check that what we were about to buy was the absolutely right, on day two we did the deed and parted with a substantial amount of dollars.  Finding the chain was one thing but the next challenge was loading it into the dinghy and getting it back to the boat and disposing of the old chain and installing the new. The whole process from when we paid to getting it on the boat and attached to the anchor and ready to go took several hours, and by the time we’d finished it was well and truly dark.

The girls spent the second day catching the bus down to Phillipsburg, the capital on the Dutch side of the island. They said that is was quite lovely and from their photos parts of the city looked nice. The Dutch side is far more touristy than the French. Cruise ships arrive and deposit most of their occupants on to the small streets which are full of glittering shops and casino's. Meanwhile back on the French side, life goes on as normal and we much prefer it that way. 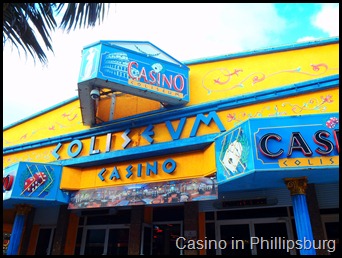 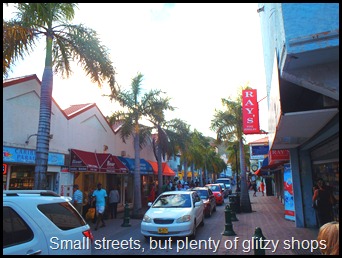 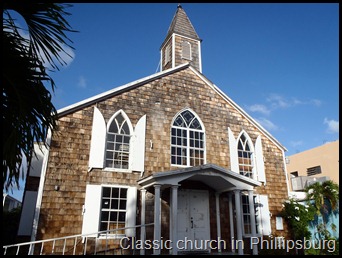 Come dusk the four of us met up at the yacht club for sundowners and watched the line up of big boats come into the Simpson Bay lagoon. It’s a bit of an afternoon tradition at the St Maarten yacht club and draws quite a crowd.

From there we moved over to Lagoonies, a cruiser's meeting place for dinner and live music.I also caught up with Kerry, an old school friend from back in the 70’s who is cruising with her partner Neil on their cat “You Never Know” 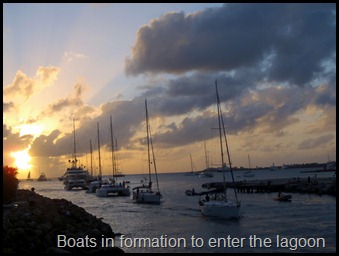 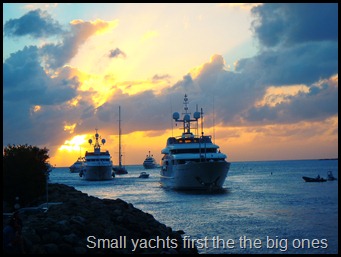 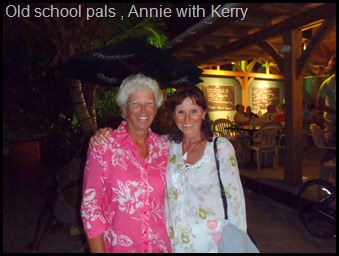 Even though we didn’t get to do any sightseeing this time round, (we have been here a few times before), it was a good stopover and we did get done what we had set out to and that’s always a good thing.Tomorrow we would be heading further west to the British Virgin Islands, one of our favourite places in the Caribbean.