Each morning at 0800, we flick our vhf radio onto channel 68 and tune into the cruisers’ radio net. It’s a great way of catching up on the day to day activities that affect our lives while staying in Trini. All the regular things are tabled. For example, medical emergencies, buy, swap or barter, treasures of the bilge, (a great way to offload unwanted gear off the boat), and the most important one of all, social activities. There’s always the usual like shopping trips, hiking, the weekly dominos challenge, but on this particular day Susan from the yacht Andromeda announced that she was putting together a trip to the southern end of the island. Our ears pricked up, somewhere new to go. It was a tour to the Pitch Lake.What the heck is a Pitch Lake we said to ourselves. Well, it sounded a bit interesting so we put our names down.

On further investigation we found out that the word pitch is quite an old English term for asphalt or tar, the stuff that roads are made from. We also heard from fellow cruisers that it was a  good tour and one that you were unlikely to experience anywhere again.

Our excursion day rolled around and along with a van full of like minded curious people we headed off to the southwest end of the Island to a village called Le Brea. With Jesse at the helm we knew that we’d be in for yet another fun day out. Stopping along the way to keep the wolf from the door, we snacked on the likes of  boiled chicken feet  and  tasty potato pies (not the kind we get back in Oz).

About a mile from the lake the road became quite bumpy and Jesse explained that as the pitch, oozing from the oil rich rocks below, pushes it’s way to the surface, the ground moves every which-way effecting anything and everything in it’s path including the foundations of the village homes

Pitch Lake, of which there are only three on the planet, is a natural wonder and has the largest deposit of asphalt in the world. 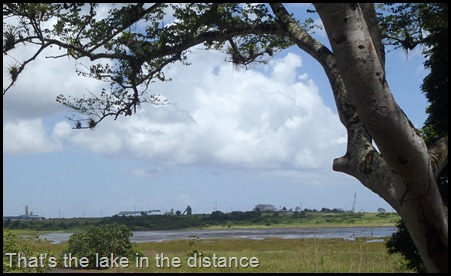 Covering about 100 acres it is reported to be 75 metres deep of semi solid black pitch. From a distance it looks like a giant parking lot. Surrounded by reeds and cashew nut trees our guide told us that it attracts about 20,000 tourists each year. Walking down to the lake we had to negotiate a  narrow track where the pitch was bubbling to the surface. We were told not to stray from the path as some parts of the lake are like quicksand. The hotter the sun the more soft, squishy and fluid-like the pitch becomes. One wrong step and it could be all over. Not a pleasant way to depart this earth I reckon.

Discovered in 1595 by Sir Walter Raleigh, he used the pitch to caulk the wooden seams of his boat. Today the pitch is mined by the Trinidad Asphalt Company and exported worldwide to pave streets and roads including some in New York City. We were told that during the mining process a 40 x 40 foot hole in the lake refills itself in only three days.

Once we got down to the lake the heat rising from the surface was quite intense and that familiar smell of of fresh asphalt tingled in our noses. It was a weird spongy feeling underfoot as we walked along, with the imprints of our shoes clearly visible. Way too hot to walk on bare-footed, the pitch strangely resembled an elephant’s skin, all wrinkled and dry, except of course where it had turned to fluid. With the exception of a few very hardy reeds the lake was devoid of natural life. 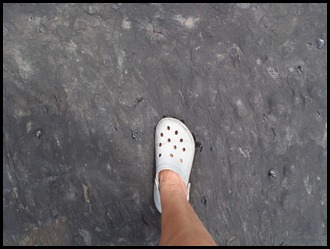 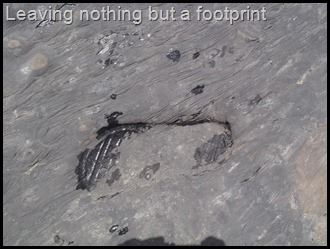 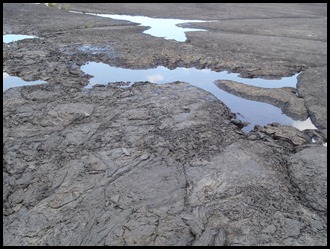 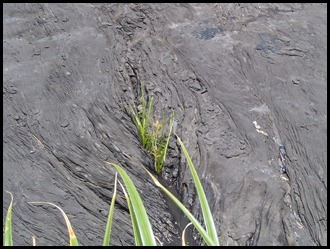 Further out on the lake everyone had a chance to scoop up some of the gooey pitch on a stick. We just had to make sure the wind didn’t whisk it onto our clothes. 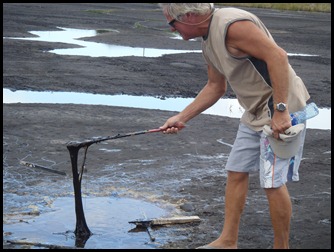 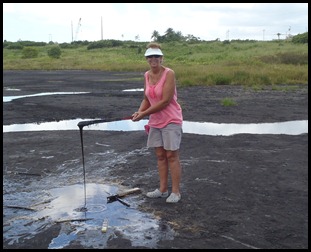 Many people believe in the lakes’ medicinal benefits. Apparently the sulphur content that seeps into in the water sitting atop of the pitch during the rainy season can cure a long list of minor skin aliments as well as psoriasis and arthritis. A few of our group decided to take a dip and even Liam splashed his face, though I’m not quite sure what he was hoping to cure, aging perhaps? 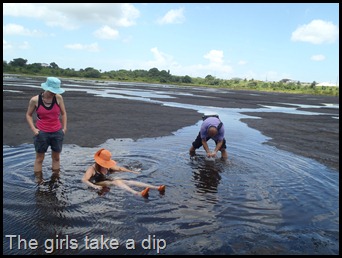 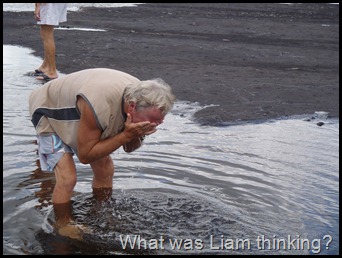 Leaving the Pitch lake we made a quick lunch stop for some excellent roti's and then continued on to a seaside Hindu temple, the name of which escapes me. Adorned with flags and ornate statues honoring various gods, the wafting smell of an open air cremation just across from the temple was a little off-putting. 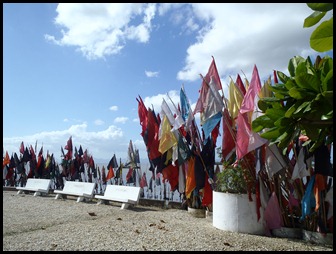 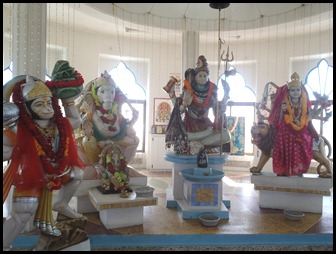 From here we stopped at one more temple before heading back to to the marina after another great day out thanks to our tour guide extraordinaire, Jesse.