After sitting out hurricane Irene it was great to be out and sailing again, albeit just a short sail over to the town of Belfast. We did have to keep a good lookout though, as there were still quite a few  large logs and the odd chest of drawers floating past. It’s just amazing what ends up in the water after a hurricane  or big storm has passed by. You  just can’t imagine what would you’d see after a tsunami. 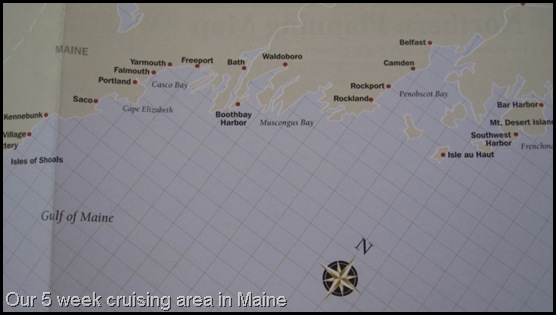 Belfast was a nice change after having been in a succession  of quiet bays. The town had a lovely laid back feel, but then that’s kind of how  all  the towns in Maine are really.  The main street had quite a few nicky –nakky type shops and a couple of restaurants, in particular a very good Thai one that we visited twice. But the pistaresistance was their quaint movie theatre. It was a real old style one, not your big flashy Hoyts movie complex type that you find in the cities. The box office only opened an hour before the show started but even then there was no rush and no queues. Being able to go to the movies twice in the same week was a real treat for us. Liam isn’t much of a movie hound , but seeing as how the poster out front showed that “The Help” and “Rise of the Planet of the Apes” was on offering, he was in. And we  were sure glad that the weather wasn’t as cold as the car park sign indicated! 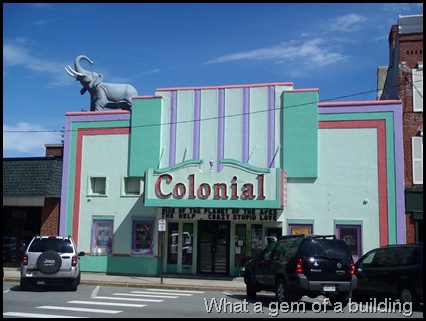 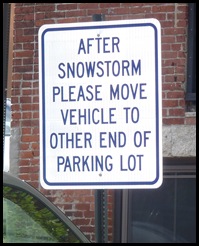 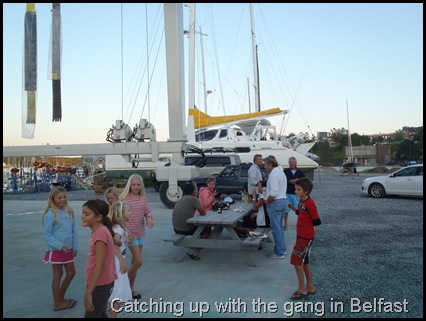 It was also good to be able to catch up with  Daryl and Annie from No Rehearsal while  they were still around and  making the most of their haul out, post Irene. That’s their cat with the yellow trim in the photo on the left. They would be taking off for the Uk and Malta in a couple of days time and we weren’t sure when or where we’d see them again. At the same time we also got to see friends from Daydreamer and Remi De.

We’d heard on the grapevine that there was to be a Windjammer Festival down in Camden over the Labor Day Weekend and that just happened to be the coming  weekend. Sounded like it would be fun so the trio of cats hot footed it down there. If there is one thing, apart from lobsters of course, that  the state of Maine is good at it’s festivals.

The two day event was great. Plenty of stuff to keep everyone busy. There were fireworks, face painting, pirate shows  and movies for the kids, bands in the park, lobster crate races.. a bit like an egg and spoon race but the degree of difficulty and the chance of getting wet were way higher, and the local library had a couple of excellent  presentations including one on the incredible  failed Antartic voyage of the explorer William Shackleton. It was a packed house and we were lucky to get a seat with people even sitting on the floor. 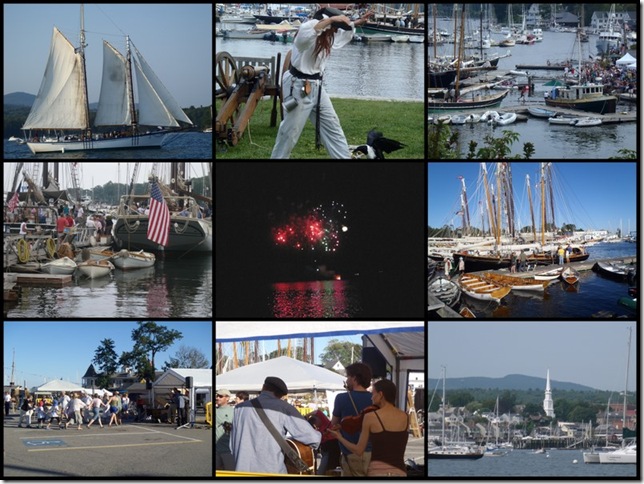 The Windjammers were all open for inspection in the afternoons and it was interesting to see the insides of these magnificent looking vessels and talk to the crews who worked on them. With the weather really starting to get nippy now, our thoughts had turned to thinking about leaving Maine to head back down the coast. Before we did we decided on one last stop in Penobscot Bay. We chose a small bay called Carvers where together with Remi De we had our last big bon-fire while in Maine. It was a cracker, literally, as the Remi De’s brought in a big box of fireworks to let off on the beach. 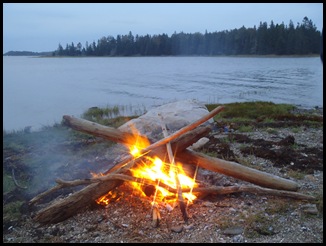 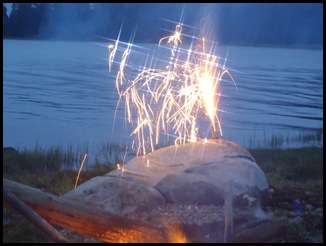 From here we headed down the bay making  a quick stop in Rockland were we filled up with fuel and bought sixteen more lobsters. Now sixteen lobby’s may sound a bit of overkill but we figured that having some tasty lobster meals on the way down the east coast and especially on Xmas day would be a real treat. 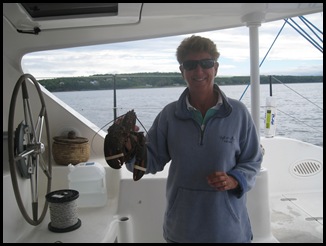 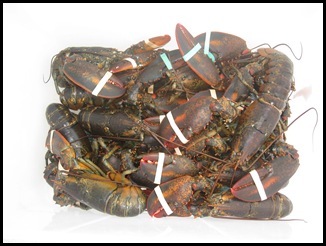 By the time we’d left Rockland it was getting late so we headed into Tennants Harbour for the night. The approach was due west and looking into the  low sun on the water as we entered the bay. As always we were being ever vigilant and just when we thought we were home and hosed, whamo, we snagged a lobster pot around out starboard propeller.  Quickly  both motors were put into neutral  while we assessed the situation. There was some moderate cussing from the skipper, not sure if it was against the offending pot or because he would have to get into the very cold water and try and cut it off. He donned his wet suit, and armed with a knife bravely jumped in. I mean, lets be honest here, there was no way this little duck was getting  into that water, after all someone had to stay on board and be ready to pass the skipper the hot shower hose and fluffy towel an his return, right?. Within a few  cold minutes he  had returned with his trophy. That was the first and only pot we snagged the whole time that we’d been in Maine. Not a bad score when you consider how many thousands of pots are lurking in these chilly waters. 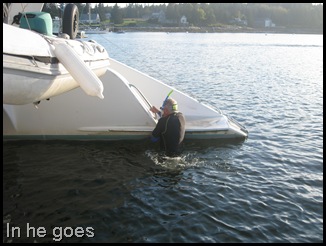 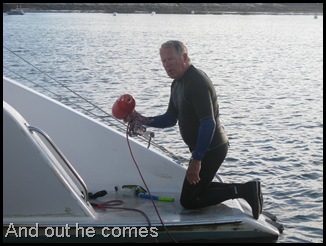 The  quaint fishing village of Boothbay Harbour  was next on our list of anchorages. Arriving into the harbour in the late afternoon we didn’t get a chance to explore the town, although the guide book said that it was quite lovely and worth stopping for a day or two. Maybe we will see it next time around. This was the last town that we would visit in Maine and it was also our last chance to have a hearty lobster meal ashore. The aptly named '”Lobster Dock” fitted the bill nicely and together with friends from Remi De we headed in just before sunset. The setting was fabulous with a big open deck area facing west to take full advantage of the beautiful sunset.The lobsters were cooked to perfection and the beers were icy cold. It was a great  way to say goodbye to Maine. 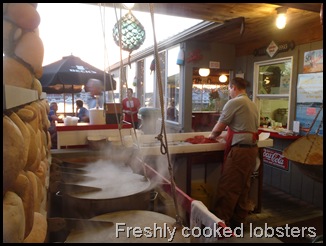 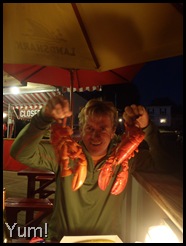 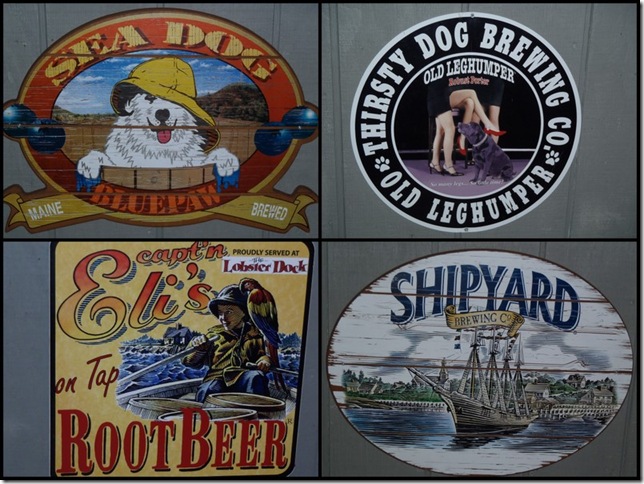 And so there you have it. We had spent nearly six weeks cruising in this wonderful state and we had really only scratched the surface. It was sad to leave but time as always marches on and it was starting to get very, very cold. Our last night was spent anchored at  the Isle of Shoals on the Maine / Massachusetts border and as a fitting goodbye to Maine mother nature put on a beautiful sunset. We had a fantastic time up here and would recommend to all of our friends both cruising or land based to  put in the hard yards from where ever you may be, and make the trip up  here. You won’t regret it. We never did get to see a Moose so I guess we’ll just have to add that one to the list for the next time . 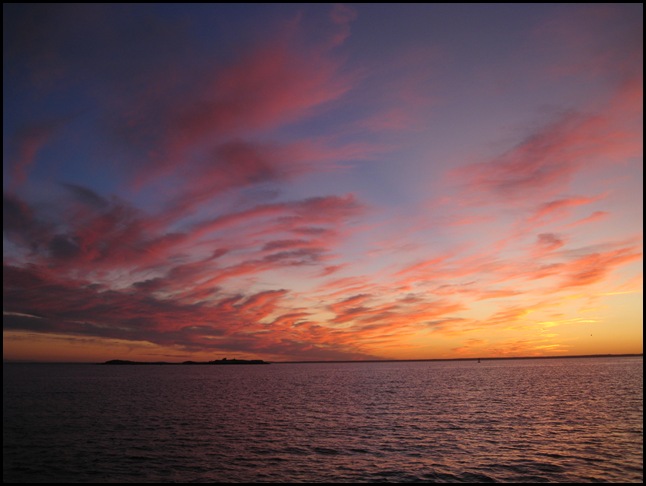 But for now, new adventures await us and Boston is beckoning. 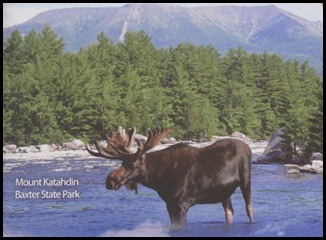