THE TURKS AND CAICOS ISLANDS

Not so long ago  if  anyone had asked  us where the Turks and Caicos Islands  were they would have most definitely been met with  rather  blank looks on our faces.To be quite honest we’d never  even heard of this little group of Islands. As Liam says had  someone  told us that they were just north of Antarctica we probably would have believed them . So to put the record straight these remote islands lie  around 350 miles to the north west of Puerto Rico and almost due north of The Dominican Republic . The seven Islands  and numerous cays  that make up the group are a diving mecca.

The capital, Cockburn Town, is situated on Grand Turk Island and this is where we  completed our check–in formalities. Arriving at the anchorage we were greeted by the beautiful aqua waters and pure white sand beaches for which the Turks and Caicos are renowned. To date these are  the most stunning aqua waters we’ve seen and as you would know  from reading our blog  we’ve seen our fair share of holiday brochure blue water since arriving in the Caribbean. 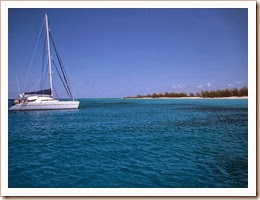 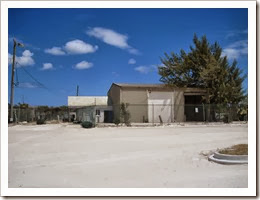 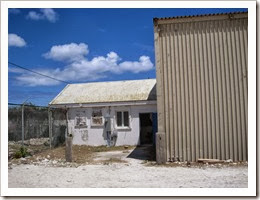 Once ashore it didn’t take us long to locate the customs office, mind you, we did walk past it the first time. We’re  so used to seeing signs pointing the way but as you can see from the picture  on the left and the one above the office looks more like a shed attached to a big garage. The customs officer was most polite and was gob smacked when we told her that we’d sailed from Australia and that we’d gone the long way via the Indian Ocean and the Red Sea. Having two Aussie boats  check-in on the same day,‘Remi De’ and GWTW  was just too much for her.  I guess the majority of  her customers are from yachts  that come down from the USA.

After completing our arrival  paperwork we decided to move the two  boats over to a small              uninhabited island named Long Cay. There have been very few pilot books written about  the T&C’s as when it comes to nautical charts,  much of it still  remains unsurveyed. Of  the books  that have been published, they warn of the many dangerous reefs  that surround these islands and of the numerous coral heads that dot the seabed, sometimes lurking  just a few inches below the water’s surface. Most of the time it is eyeball navigation and this is one place that is  definitely NOT for the reef-phobic's of the cruising world.  Staying focused  and wearing polarized sunglasses is the name of the game here.  Moving slowly  through the reefs and keeping a good eye on the depth sounder as we went (it also helped having Remi De in front of us), we made our way across the  shallows  to our anchorage for the night. The water colour was so intoxicating that within half an hour of dropping the hook we were all in the water snorkeling around the bommies ( coral heads) and enjoying the warm-as-a-bath-water temps. 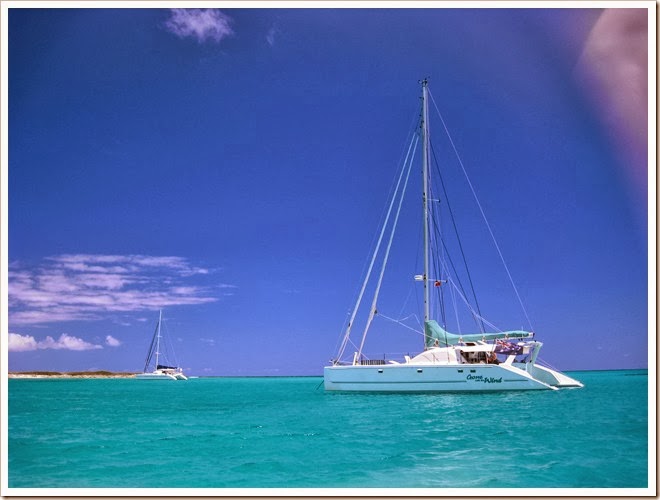 The little cay was just perfect for sundowners on the beach and Bruce and Remi made a wonderful father/daughter team as they piled driftwood together to make a beach bonfire. Needless to say the lure of the open fire saw us stay on the  beach for a long time after the sun had disappeared beneath the horizon, all that was missing were the marshmallows to toast. 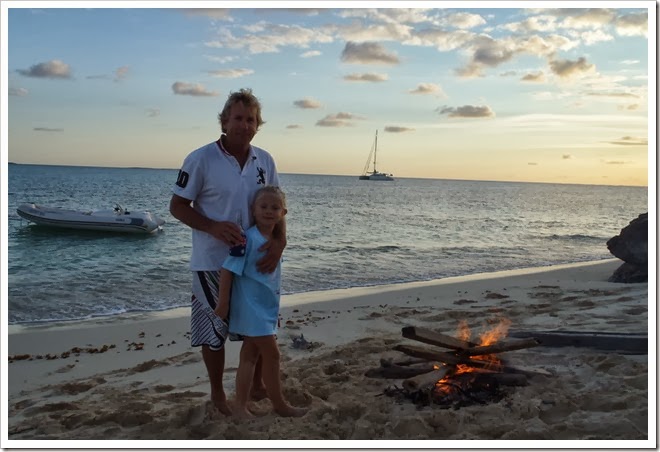 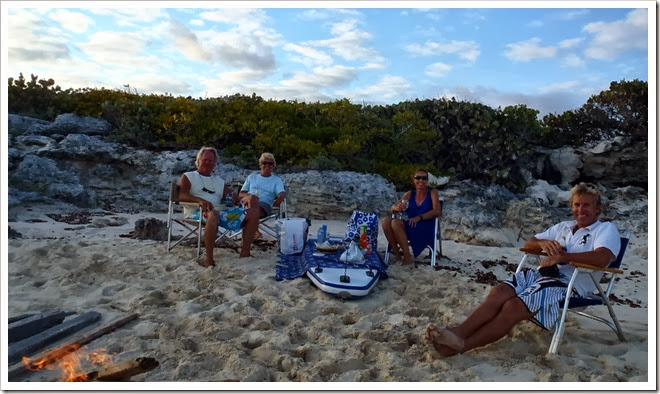 The following day we headed  back across the reef and over to Salt Cay where Liam and Bruce donned their scuba gear and hit the water for a wall dive. Most of the diving spots in the T& C’s are wall dives due to the immense depths. Thousands of feet of water surround these islands up to a mere half a mile from the shoreline.  Many free mooring balls are available for the purpose of diving so both Remi De and us picked one up. The balls are  provided by the islands’ national park service and by using them we help preserve the fragile coral from being decimated by boats on the anchor. The wall dive sites, located on the edges of the reefs,  plunge down thousands of feet into the abyss. For me it was a bit scary really but the boys, undaunted by the drop off, descended  to depths of around 100ft /30m.  During their dive Bruce spotted a shark about 5ft long, which he thought had it’s head stuck in the wall. Liam reckons it was just having a snooze, but the story we girls were told was that Bruce grabbed the shark’s  tail, gave it a good shake and pulled it out of the hole ! The fish in question then  turned it’s head, took one look at it’s assailant and was off like a rocket, thankfully never to be seen again. 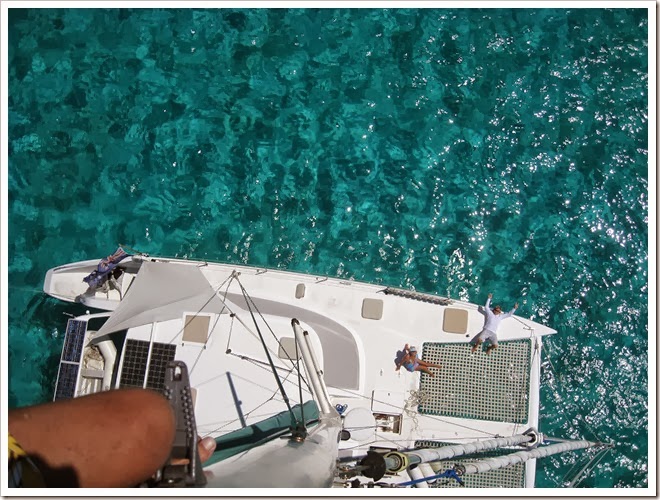 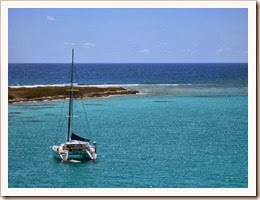 Having had  a good night’s sleep at Cotton cay and after Liam made a quick trip up the mast to tighten a loose light fitting  (glad he took the camera up with him)  we were off for a  lovely downwind sail under spinnaker across the  22 mile Turks channel . Arriving at our destination in the  early afternoon, I joined  Liam and Bruce for a quick dive on the reef, sadly my regulator sprung a terminal leak so that was the end of diving for me until the reg could be repaired. Where we stopped  was just on the edge of the Caicos Banks, a 60 mile stretch of turquoise water with depths of between 10 – 15 feet the entire way. If the light was good  i.e. no cloud cover, we’d planned to traverse the banks  following day.

Around 8am Remi De and GWTW very slowly and carefully  tippy toed our way out of our  anchorage, the depth was only 7ft, yikkes! With the light cloud cover starting to dissipate and the sun climbing higher everything look good for a safe passage across the banks. The author of one of our guide books says that this area of water, because of it’s incredible colour, can be seen from space and it quite possibly is true. The water colour grew lighter and lighter and we nearly had to pinch ourselves to make sure that we weren’t dreaming. The contrast of the white sand seabed and the dark shadows of the coral heads made navigating  the banks a piece of cake. Bruce and Remi were spotted sitting up on their first set of spreaders taking in the view while Toni  took photos of them from the deck below. We’d set course for French Cay  some 38 miles into the banks and stopped there for a spot of lunch and a snorkel before continuing on to West Caicos Island for the night. The transit of the Caicos Banks  will  probably become one of the most memorable passages of this years cruising season. Words just can’t describe how beautiful it was. 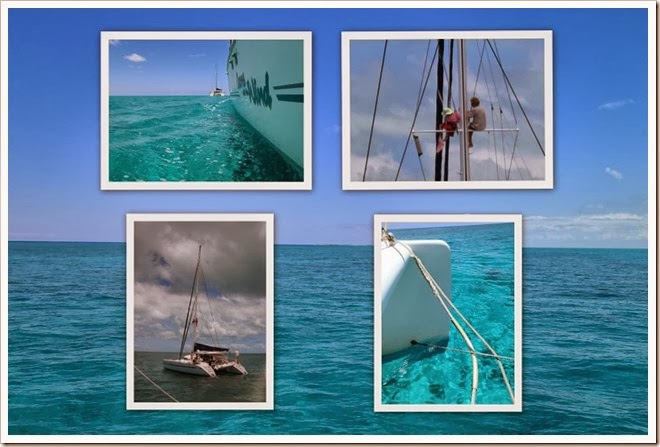 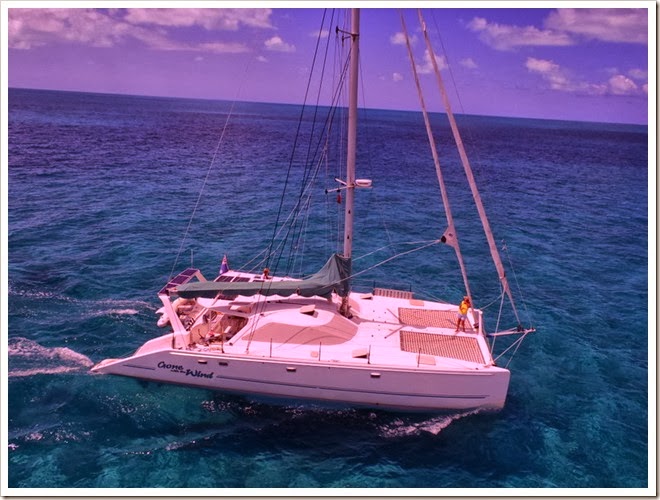 Having   recently purchased an underwater camera, our stopover at French Cay seemed the perfect opportunity to give it a test run while we snorkeled. Still in the learning stages and quite unfamiliar with all the bells and whistles ,the first few pictures weren’t all bad, just got to get the fish to stay still while I focus the camera! 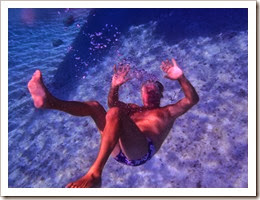 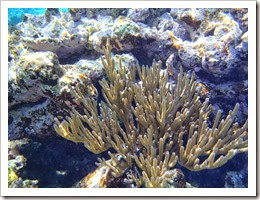 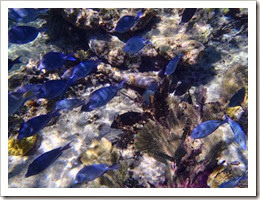 We moved on to a few other lovely anchorages around West Caicos Island and did more snorkeling and diving over the next couple of days before arriving at the main tourist island of Providenciales.  We entered via the Leeward Cut which is a small passage through the reefs. Motoring up the channel past sandbanks, wetlands and mangroves we anchored in the shallow waters outside a lovely near-deserted  resort and a beautiful unfinished  Marina.The anchorage here is classed as a hurricane hole so it is far removed from any swell and the added bonus is that it’s not too far from town. Our time in the T&C’s was coming to an end so together with Toni, Bruce and young Remi, we hired a car, did a whirlwind tour of the island, a bit of quick provisioning at the rather pricy IGA supermarket, and checked out with customs all in one afternoon. It is so laid back  and accommodating  here, that the local customs officer drove from his office on the south side of the island to the Turtle Cove Marina on the north side where he completed our check-out without even getting out of his car. He had already  stamped our clearance papers when he gave them to us and that was before we’d filled them in!. That had to be  fastest customs service we’ve encountered in any country so far.

As always, the  time to leave these beautiful places comes around way too fast, but move on we must. More adventures lay ahead and with only 50 miles to sail across to the the Bahamas a new country and all new experiences are  just around the corner.

General : Lots of reefs so be cautious! Wall dives abound. Free mooring balls at dive sites when not in use by commercial craft.

Email ThisBlogThis!Share to TwitterShare to FacebookShare to Pinterest
Labels: Turks and Caicos Islands