After a short but brisk  32 mile sail across from the BVI’s we arrived at the white sand flanked, uninhabited and  nameless northern bay on Isla Culebrita. I say nameless as neither of my  two guide books had a name for it, although on our Max Sea navigation chart it was called Montiecito. Our first stop in the Spanish Virgin Islands (SVI’s) proved to be a cracker. The bay was tranquil,  the water clear and there were a couple of free mooring balls to pick up. We were sailing in company with Remi De who had Aussie friends Steve and Chris aboard. who’d  we’d met briefly back in the BVI’s. Arriving early into an anchorage is always a bonus and as it was just after lunch we all decided to walk over to the other side of the island to investigate  the sea pools known as “the jacuzzis”. It was a hot day and a swim in the bubbling pools was just what we needed. There are a couple of pools over there but the best one was the deeper, more lively pool on the ocean side. It sure lived up to it’s name and with in minutes of clambering down the rock ledge and into the pool the sea came crashing in on us, turning the water into a caldron of bubbles. After a half hour we decided to move on back to the beach. The more energetic members of our troop made rumblings that we should walk up the hill to the old lighthouse, thank heavens that idea didn’t get up, it was just too hot. So a swim off the back of the boats got the green light instead. 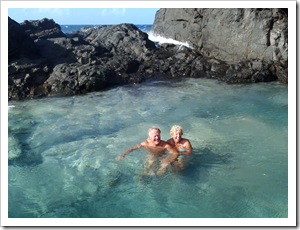 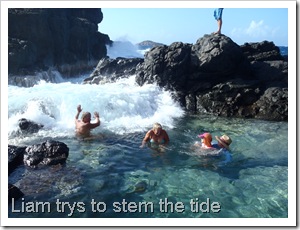 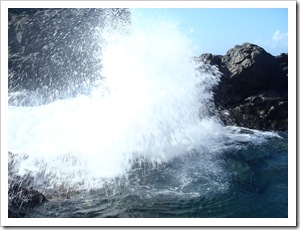 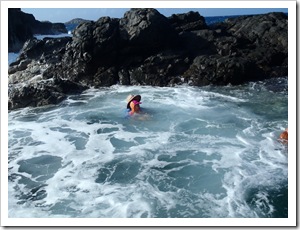 The  crescent shaped beach was the perfect venue for sundowners, so at the appropriate time we hopped into the dinghy and headed over to the soft white sand. The Remi De’s had already set up camp when we arrived. Steve had constructed a  make-shift hors d’oeuvres table from a few rocks and some driftwood, we’re a resourceful lot we cruisers. It’s always fun to go ashore  and  chat with new friends, and  as the hours  slipped by  we  enjoyed the setting, the company,and  the sunset  and oh, and  as  is so often the case, we also overindulged on the nibbles. Needless to say dinner that night was a non event . 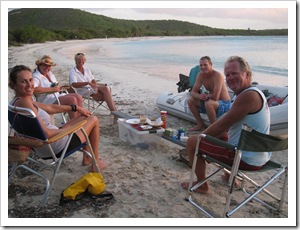 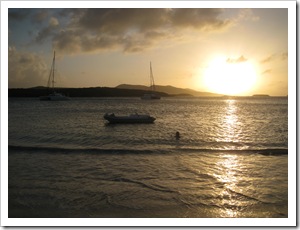 Isla Culebra
The following morning we moved the boats over to the  sleepy town of Dewey on the main island of Culebra. After negotiating the various reefs along the way and those  at the entrance, we anchored in the bay of Esanda Honda to complete arrival formalities, with the view to move to the  more pleasant anchorage of Dakity Harbour bay later in the day. 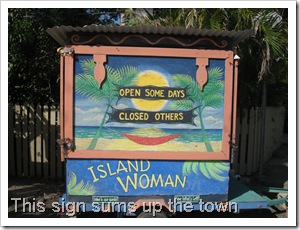 The Spanish Virgin Islands and Puerto Rico both come under the umbrella of being a protectorate of the USA and therefore, when clearing in with customs, you are doing so in accordance with all the rules, regulations and efficiency  of the USA itself. Before stepping ashore we decided to call the local Coast Guard, who we’d heard  quite often  on the airwaves over the last 24hrs, and ask them where we had to go to check-in, but that was a  dead end as they didn’t answer our call. Oh well, on to plan B. Our pilot book stated that there was an immigration office out at the local airport so armed with this knowledge we gathered our boat papers, donned out walking shoes and set off to the shore to complete our formalities. Once on the dock we were greeted by a large sign telling us that we must immediately report in to CBP (Customs & Boarder Patrol) by calling the telephone numbers listed on the sign. Ok, small problem, we did not have a USA cell phone  and our trusty phone that we’d used everywhere else on the planet was not compatible with the USA mobile network. So now there really was no alternative, it was the airport or bust. So off we trudged to the airport, a good 30min hot walk away. Arriving there we were thankful for the air conditioned  customs office. The CPB officer was extremely friendly and  very surprised that we’d just “turned up” in his office without checking in by phone first. A tad concerned  that we had infiltrated security and arrived into what essentially is the fortress of the USA  unannounced, he lent us his  phone to call the all important phone number so that we would be legal, and so that he wouldn’t get the blame i suspect, before he processed us into the system. About 40 mins later we were all done  and dusted. We’d paid our  fee of $19 and had our permit to cruise in any  USA waters for the next 12months.
It was hard work all this check- in business so on the way back we stopped at the aptly named Dinghy Dock restaurant for a quick thirst quencher and a chance to meet some of the locals  before moving down to the delightful reef anchorage of Dakity Harbour, where we would spend the night. 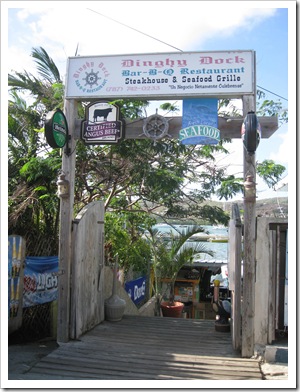 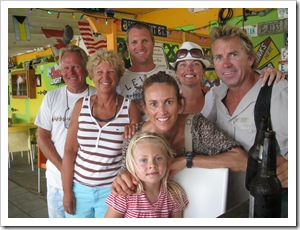 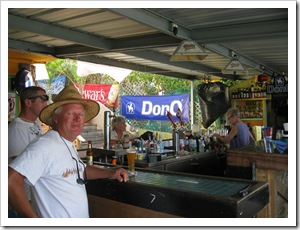 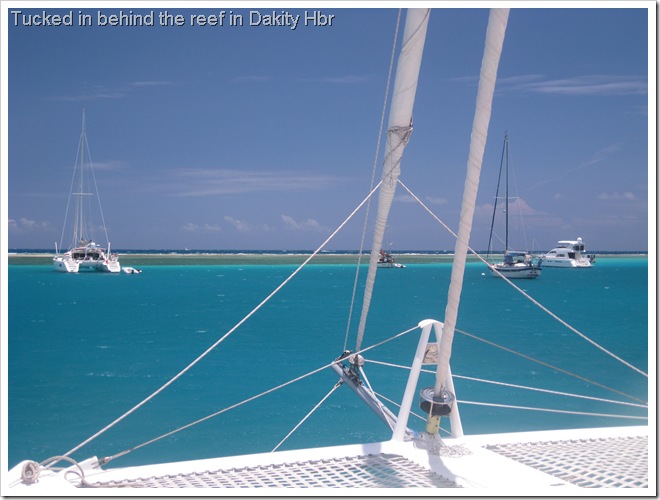 The rain and wind that had been forecast arrived on cue and  the weather began to  deteriorate  as we approached the western Puerto Rican coast. A change of plan was in order, we would now stop at Isla Palominos for the night and continue on to San Juan the following day. The tiny island of Palominos is just a few miles from Puerto Rico. Again,  free mooring balls were on offer so we picked one up and hunkered down for the rest of a very relaxing  rainy afternoon. 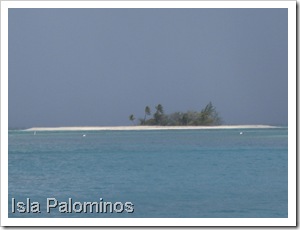 The squalls came and went  and often the coast which lay only 4 miles away was completely obscured from sight. So much for watching the sun set over the famous tropical rainforest of El Yunque. Whilst we read books, watched DVD's, tinkered and caught water, the decks got a lovely and well needed wash down thanks to  mother nature.The next morning we made an  early start for San Juan. Unfortunately we had  to by pass the island of Vieques and its Bio luminescent caves due to the adverse weather and the wind direction


Rounding the cliff face on the approaches to San Juan Harbour the familiar sight of a Spanish fort sat proudly on the headland. The Spanish of yesteryear certainly had the art of fort building down pat and they  built them to last. 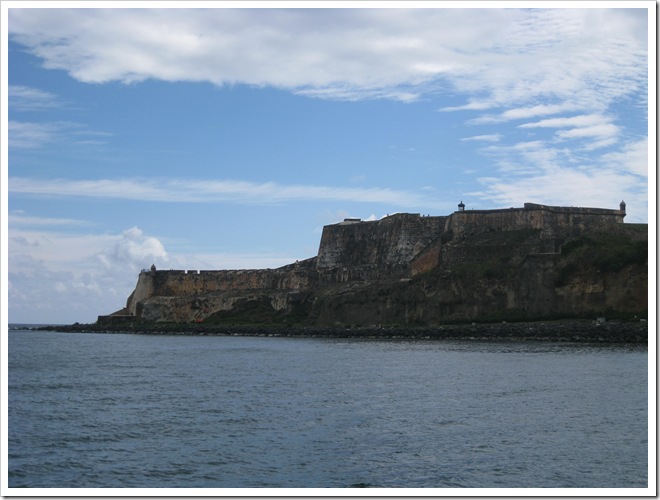 From reading the lonely planet, the Fuerte San Felipe Del Morro has watched over the harbour since 1539. The 140ft high walls, which are 15ft thick in places, certainly would have done a great job of keeping out any would be conquerors.  Along the side wall  which faces the harbour a large red door / gate, the Puerta de San Juan is still visible. This  is one of the three remaining entrances to Old San Juan through which all the colonists and supplies were brought into the town  from ships at anchor. 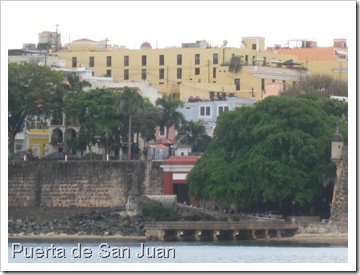 Following the directions from our guide book and charts, we were surprised to find  that the yacht anchorage was located next to the cruise ship dock and  that it was flanked by a small airport. On the opposite side of the small anchorage was  a beautiful large  dark blue motor yacht complete with a 60ft  dark blue sailing yacht and a large, dark blue of course, power boat tied down on her deck, obviously the owners toys! The wealth of some people on this planet just keeps on astounding us time and time again. 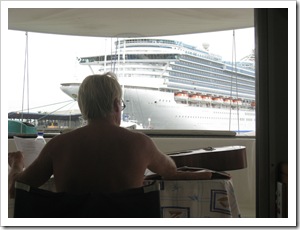 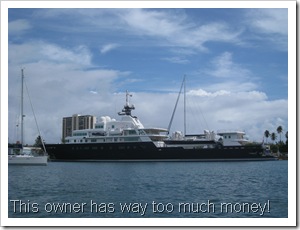 We stayed in San Juan for only a couple of days but boy did we cram a lot in, shopping wise that is. Having been away from a major provisioning center for what seemed like forever, there was lots to catch up on and no time to waste. The list was long with  priority  being given to  the purchase of a new phone, so that we could make those vital calls to the United States CBP, and an underwater camera to take pics at our next few destinations, the Turks and Caicos Islands and the Bahamas. From a mall and specialty shop standpoint we were in the USA and there wasn’t much we couldn’t buy. Lucky for us we were with two veteran shoppers,Toni and Bruce. Back in their water skiing days they had lived for many years in Florida and it seemed that San Juan shopping was like Florida re visited. So they took us to all the huge electronic stores, malls and supermarkets over the next few days. We pretty much shopped till we could shop no more. Steve and Crissy, who’d been staying on Remi De, headed back to Oz and it was sad to see them go. Our last afternoon was spent  doing a whirlwind trip around the old city. The small cobblestone streets and enticing tapas bars and restaurants made us wish that we had more time to stay. 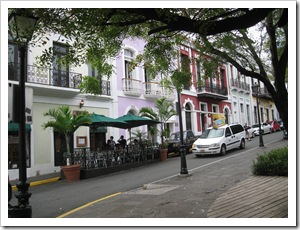 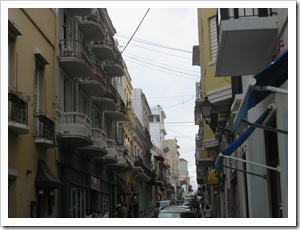 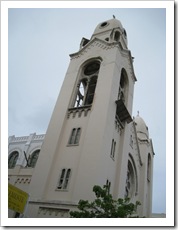 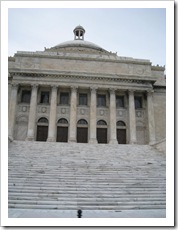 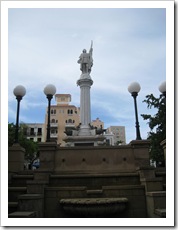 What little we saw of the old city we really liked, and  vowed to go back  to Puerto Rico and the SVI’s again next year, but for now it was time for us and our sailing buddies Remi De, to head off for more adventures in the Turks and Caicos islands. 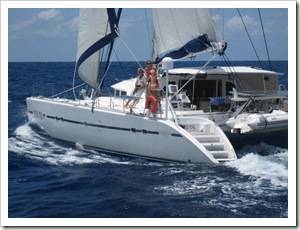 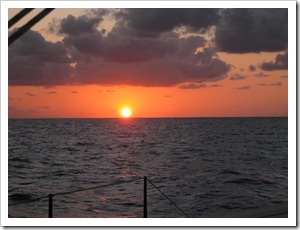 CRUISER INFO : Formalities: SVI’s, Entry port is Isla Culebra: check-in via telephone on 1 877 529 6840 (Puerto Rico)  or 1 787 742 3531 (Culebra at airport) or try calling United States Coast Guard Puerto Rico on VHF 16 and they should arrange  to contact CBP for your arrival, or if all that fails, walk out to the airport and check in there. Airport office hours 0800 -1700, 7days.The airport is small  so ring first  to check that the officer is in attendance. The cost of your cruising permit if your last port of call was the BVI’s is $19usd OR if your last port of call was in the USV’s it will cost you $37usd. No one can tell us why it is more expensive if you arrive via the USVI’s.
Supermarkets : small ones in Dewey Town and Veggie van on the road to the airport opposite post office.
Puerto Rico: No check in required just call the 1 877 529 6840, check out at Customs House in Old San Juan, go to the “carrier department” and ask for a clearance paper( free) to your next destination.
Anchorage San Juan Harbour, co- ordinates:  018.27.60 N / 066.05.58 W
Supermarkets and shops: Most a car drive away. Best Buy is great for all electronics, West Marine for boating gear, Wal - Mart or Sams ( need to join their club) for food and veg. Ask for directions from the marina office at the head of the San Juan anchorage. Car hire is from a small booth across from the Hilton Hotel a short walk from the anchorage. Ask at marina office for directions.
****************************
Posted by Gone With The Wind .... on safari on Tuesday, May 10, 2011