13th - 18th November 2010
Volcanos, Volcanos and more Volcanos.
Our first stop on Lanzarote was Arrecife in Port Naos the island’s capital city. The anchorage is tucked into the northern end of the bay and the holding is only so so as the bottom is loose volcanic rock. Further in shore near a small beach there was a   nice sandy patch which may have been better, but it was a tad too snug for us to fit.
The main reason for stopping here was to visit the Port Police near the cruise ship terminal and have our passports stamped into the . We also wanted to have a look around the town and do a little Xmas shopping in Ikea which was very conveniently located just a 5 min walk from the anchorage. Arriving on a weekend has it’s downside  as quite often the officals do not work as was the case here, so we settled for a stroll  around the town and found a small café for lunch.
In view of the weather forecast and the strong winds that were due to come in from the north  and as nothing much about Arrecife appealed to us, the next day we decided to move down to the bottom of the island and spend a few days at the delightful “ Rubicon Marina”. Quite a few of our friends were already enjoying life in the marina and we saw it as another chance to catch up with them and do a little land touring knowing that GWTW would be snug as a bug when the strong winds blew in.
The marina had great facilities with shops, restaurants, tapas bars, a small supermarket and a pool on site. A couple of klms away was a bigger town with larger supermarkets and a great variety of restaurants including a good Chinese one, which was like a huge magnet for us as we love  Chinese food..
As we hadn’t been successful with our visit to the Port Police while in Arrecife the first time, we decided to hire a car for a couple of days to see the island as well as complete a couple of important errands So first stop was to be Arrecife and the port police again. It was such an easy check-in, taking only a few minutes we sure wish every country was like that. Next it was a quick detour to the Disa plant to have our French propane bottle filled which they did for us while we waited so that was another success. Then it was off to explore the northern part of the island.
The landscape of Lanzarote was the most barren that we had seen since driving through back in the . This island has over 300 volcanos and the moonscape of dark rock and lava flows are stark, striking and  pretty much devoid of animal and  plant life apart from cactus which seems to be able to grow anywhere. 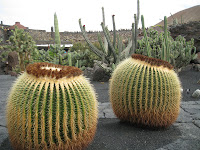 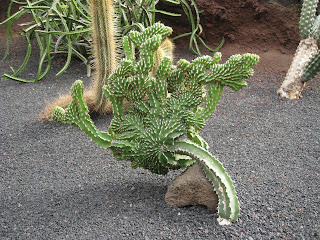 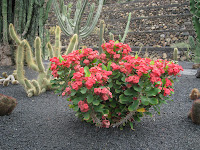 Driving north through villages of white washed boxy homes we arrived at the” Jardin de cactus” ( cactus gardens). This garden is home to over 1500 different species of the plant and each one of them is labeled! .I had no idea that there was that many types of cactus in the world. Now a trip here may sound pretty dull to most people but it actually was very interesting and I would say worth the stop though not too sure that Liam would agree as he stayed in the car. Next we were off to see the”Cueva de los Verdes”, Lava caves, on the north east side of the island. These underground   caves were just awesome. Split into an upper and lower chamber the many stalactites and huge boulders strewn throughout each level are testimony to the immense forces of Mother Nature. 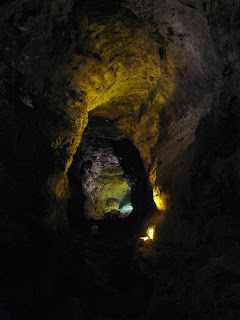 The section of the tube which is open for viewing is 1 km long and is part of a 8 km lava tube which extends about 2 klms out to sea. Although part of the cave is below sea level, no water seems to find it’s way in. For us this little adventure was about as close to a “journey to the centre of the earth” as we will ever have.
Continuing north we found ourselves on a winding road which took us up through the northern hills and   what looked to be cultivated areas with rich dark volcanic soil, although we saw no evidence of crops. There were also lots of semi circular stone fences which housed grape vines, a strange site given the lunar landscape. Quite good wines are produced on the island and this area forms part of the “wine and cheese trail” but as we still had a lot to see there was no time to slow down   and sample the vino.  At the top of the island we stopped   at the cliff top lookout   of “Mirador del ”
From here there are sweeping views over the channel to Isla Graciosa and Playa Francesca where we had been anchored only a few days earlier. We were so high up that the anchored boats across the channel just looked like tiny dots.   The drive back to the marina took us through a palm filled valley to the pretty , pretty because it had colour, pink an orange bougainvilleas spilled over fences and eucalyptus trees lined the main street. Other than that  it really was a blink and you’ll miss it sort of place but could have been good for a lunch stop.
The road system through out the islands was great and in no time we were back at the marina and catching up with friends in the local tapas bar.
Next morning we hit the ground running and were off to do more sightseeing, this time the southern end of the island. We followed the winding coast road till we reached the “Parque National de Timanfaya”. 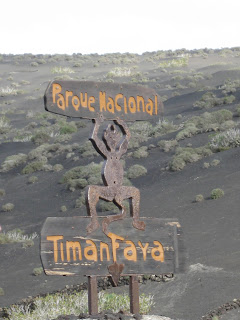 This park is one huge lava flow and for a period of six years the volcano at its center continually devastated the 20 villages and 30 hamlets in the area. 48 million cubic meters of lava spurted out from the volcano daily and molten rock was tossed over the surrounding country side and out into the ocean. The del Fugo (mountains of fire) are the main attraction of the park. We took the 45min bus tour through the park and unless you do this you really don’t get to see the grand scale of it all. At one point he bus actually drives down through what once was a river of molten lava. 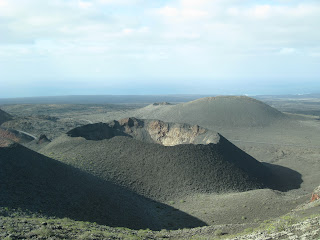 The colours and contours of the landscape are beautiful with the jaggered rocks ranging in colour   from brown and black to oranges, pinks and reds. The park is made up of several volcanoes and seemingly endless lava flows .At the end of the tour the guides demonstrate the power of Mother Nature. A`piece of bracken is thrown into a large hole and within seconds it explodes into flames as the temperatures at only a few centerimeters down are 100c. At a depth of 10m the mercury rises to a sizzling 600c.Another demonstration was pouring water down a small hole and   within seconds the now boiling liquid rushes back up at lightening speed. The noise that it makes as it rockets skywards is very loud and if you’re not ready for it   gives you one hell of a fright. 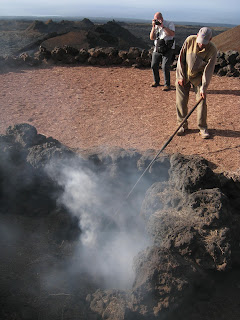 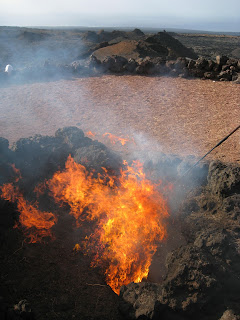 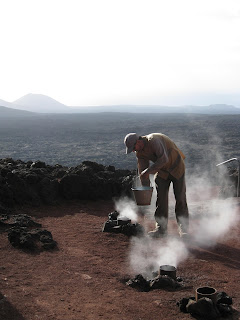 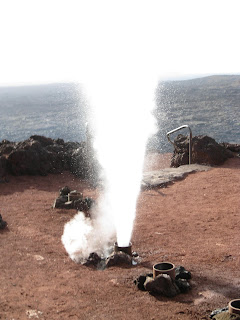 After two days of touring we felt we’d seen all that Lanzarote had to offer. Later that evening  on board Chris and Erin’s cat “Bare Feet” we spent several very entertaining hours with all our friends playing  “name that tune” musical trivia. I might add that Liam and I were the winning duo collecting the much sort after his ‘n hers Lanzarote baseball caps as our prizes.
With the days marching on, it was time for us to shimmy on down to the next island so come morning we said goodbye to our friends and left the marina as we headed off towards Grand Canaria.
Posted by Gone With The Wind .... on safari on Friday, November 19, 2010