The Canary Islands, but not a bird in sight!
6th  - 12th November 2010
Approaching from the north east the volcanic island chain of The Canaries  was a welcome sight on the horizon. We made landfall on one of the most northern islands of the group, Isla Graciosa .
The late afternoon light of soft pinks and browns on the volcanic peaks of Graciosa and the sheer barren cliffs of Lanzarote made our approach through the channel to our anchorage at Playa Francesca truly spectacular.
There to greet us were friends from Stardust, Bondi Tram, Interlude and Cristata
Shortly after we were settled a call came over the VHF radio inviting everyone in the anchorage, about 15 boats, to gather on the beach for sundowners around 1700, BYO everything. We had been hearing over the radio about these now famous "beach parties” organized by  Kurt and Katie from the US flagged deerfoot 74 “Interlude”. 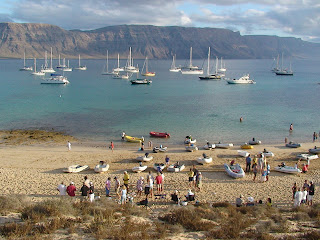 These parties had become somewhat of a legend in the past weeks and as many boats descended on the Canaries, Playa Francesca was becoming a “Be there or be Square” type of first stop.
Sundowners on the sand proved to be a lot of fun and we met some new faces that we’d heard only on the airwaves but had never come face to face with, namely Erin and Chris from the cat "Barefeet”. There were around 20 cruisers on the beach that evening and it was a wonderful welcome to the for us. Later that evening Bob and Becky from Stardust invited both” GWTW” and Sheryl and David from the aussie  boat “Samsara” for dinner, such a thoughtful thing to do for the new arrivals after the three day passage from Morocco.
We stayed at Playa Francesca for the next seven days and had a wonderful time. Boats came and went every couple of days so there were always someone new to meet .Sundowners on the beach became a tradition, and great way to catch up with all our friends after a day of  doing chores or just chilling out on the boats.
Most evenings the musical entertainment was provided by the very talented guitar playing and singing duo from “Interlude”. Liam even made a guest appearance one time and Rob from "Ellida 1"  brought along his very strange looking bagpipe made from goat skin. He enlightened us that goat was way better than sheep skin as it doesn’t leak air! Now that’s something for the trivia hounds out there.
Not only was there music but usually a light hearted game of sand boules was also on the go.
﻿﻿﻿﻿﻿﻿
﻿ 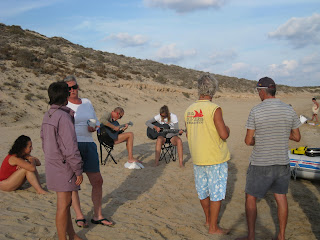 A couple of times we strolled into the main which kind of resembled a western movie set, sans horses. The only thing missing from the deserted sandy streets and closed up white washed shutter fronted homes were the tumble weeds rolling along.
The waterfront area around where the day tripper ferry berths from the neighbouring was a little more populated. A couple of nice cafes serving a good range of light meals, along with a small tourist shop, a hardware come chandlery, bakery and some supermarkets made up for  the emptiness of the streets behind. The 30 min shore front pathway walk to the village gave us some well needed exercise and a nice change of scenery. 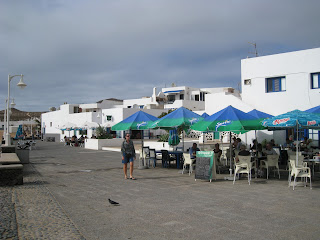 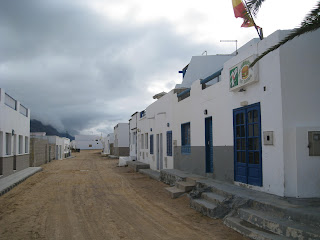 Hiking to the top of the Volcano above the beach afforded us yet more exercise was a great way to spend a few hours. The path up was hot and steep with a lot of loose shale and rocks so one had to be fairly sure footed, and have sturdy footwear. The panoramic views from the top ridge were fabulous. On one side were sheer cliffs down to the beach and the other was sweeping  vistas over the caldera and  rest of the island  including two more volcanos to the north.  Looking down over the bay the boats looked like tiny specks on aqua blue water below.
﻿

“White Rose” had left a few days behind us and we’d arranged for them to call us on the VHF on approach to Playa Francesca. The following morning about 0300 the call came as they were ghosting into the anchorage. After a rough passage down from they were ever so pleased to put the anchor down. Sundowners the next evening was another excuse, not that we need excuses, for more celebrations. This time it was to welcome our good friends Bridget, Peter and their crew Steve to cruising life in the Canaries.
﻿
﻿ 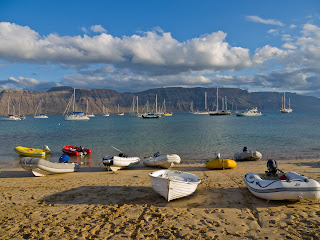 We stayed at Isla Graciosa a couple more days and then it was time to move on and  see what the rest of the had to offer.
Posted by Gone With The Wind .... on safari on Friday, November 12, 2010