Following our night in the Bedouin tent, our guides had us up early as we had many miles to cover before  nightfall. The sand tracks crossing the dunes wended their way through the desert landscape and past the military outpost village of L’Mhamid. Lying only 40 miles from the Algerian border this small village is the start and the end of paved roads in this part of Morocco. 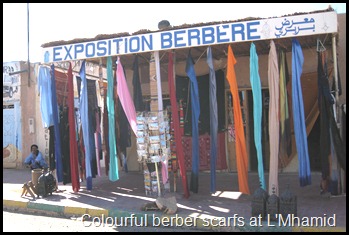 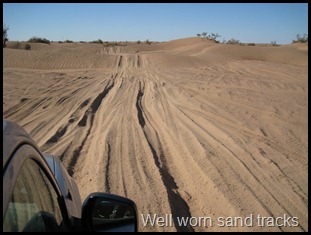 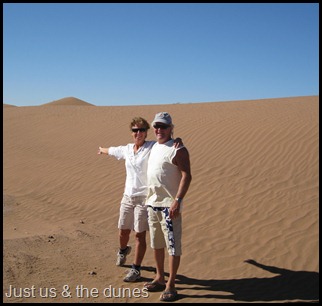 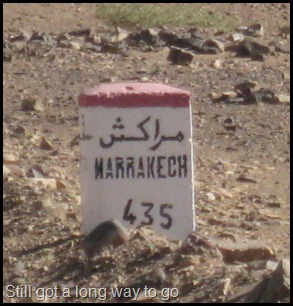 From here our next stop was to buy some pottery pieces from one of the many clay factories along the way. Morocco produces beautifully coloured pottery in all shapes and sizes and we just couldn’t resist taking some home. 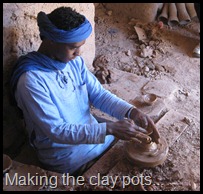 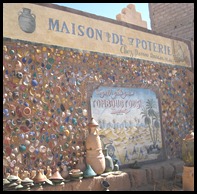 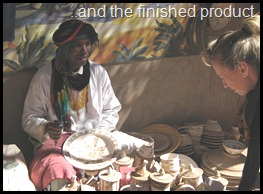 The scenery in this part of the country continued to amaze us.The contrast of colours between the desert and it’s rock formations were just incredible. 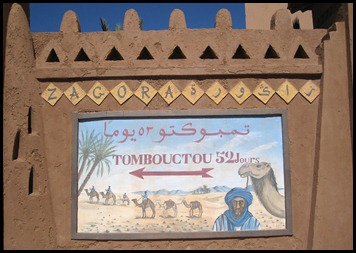 Along the way we had a brief stop in Zagora. This town, the last of civilization before the vast reaches of the Sahara Desert, is known as the gateway to the desert as beyond it’s gates there is only blazing heat and blowing sands.There’s not much in Zagora really but the town does have a famous sign depicting a a camel caravan and the sign reads “52 days to Tombouctu”, and that’s by camel or on foot!.

A few hours later we stopped for lunch at the 16th century mud brick Ksour (fortress) of Tamnougalt, one of the oldest Ksours in Morocco. The walls  are 10-12m high and would have been very imposing to any invaders. As with many of these ancient towns much of them are underground and are a labyrinth of tunnels and pathways with long shafts leading to the outside world to allow air and light to those who dwelled below. 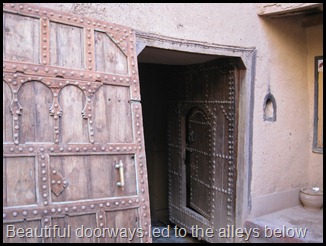 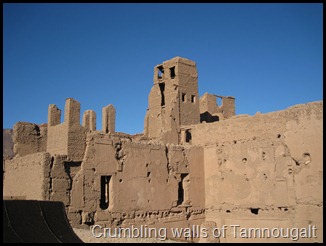 From Tamnougalt we drove along some very rough mountain roads, through narrow fertile valleys, over small streams their banks draped in date palms and on to the town of Ouarzazate where we were staying for another night in the Pearl Hotel where we’d stayed on our outward journey. But before we were dropped at the hotel we had to make the obligatory “tea and chat stop” at our guides’ brother’s carpet shop, not that we were in the market for anything.They just didn’t grasp the concept that we lived on a boat and couldn’t take the whole shop with us.Eventually we escaped their clutches with our wallets intact.

Our last day in the desert was like our first. It was a long one. Leaving the hotel in Ouarzazate we travelled 30 klms and arrived at the Unesco heritage site of Ait Benhaddou in the foothills on the southern slopes of the High Atlas mountains.

Dating back to the 17th century this spectacular mud brick Ksour sits across a small stream from the tourist village near the main road. But to get to the prize you first have to negotiate the many stall sellers peddling their wares of everything from wooden carved camels to watercolour prints. Next were the donkey handlers who told us that it was too dangerous to try and walk across the stream and far safer to take a donkey over for $10 US dollars! Ha. Being the adventurous types we decided to risk life and  limb and tackle the ranging torrent, not, and cross under our own steam.The water was pretty cold due to the melting snow in the distant Atlas mountains but it was only about one foot deep.Glad we kept our money in our pockets. 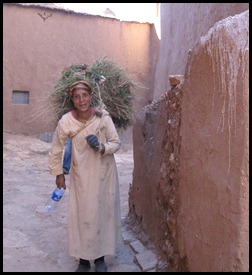 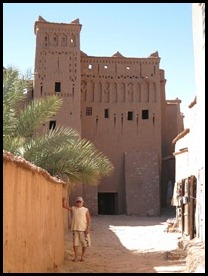 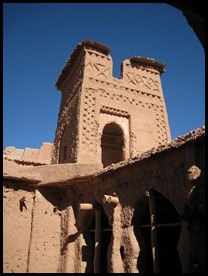 The Kasar, which is a spectacular example of southern Moroccan architecture, is a collection of dwellings, some large and some small, inside high defensive walls. It was once one of many trading posts on the ancient route linking Sudan to Marrakesh.These days it features in many Hollywood films,usually portraying Jerusalem. Ten movies have been made here including Gladiator and Lawrence of Arabia. Once inside we spent a few hours exploring the many small alleys and climbing up the different levels, as well as looking at the gladiator memorabilia The views from the top were breathtaking with snow covered peaks one direction and desert in the other 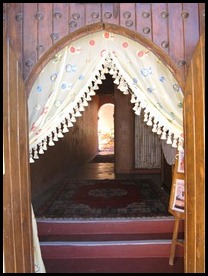 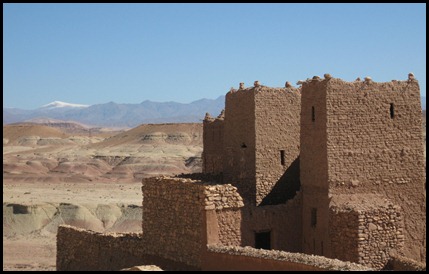 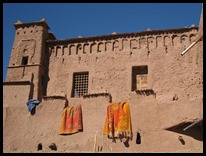 Leaving the Kasar it was time to head back to Marrakesh. The drive would take us back over the scenic Atlas mountains, passing  many small villages where women did their laundry in the flowing streams and draped it over large rocks in their backyards to dry. As the road traversed the high peaks and hairpin bends where sheer cliffs fall to the valleys below we were glad that  this time we were in the comfort of a 4X4 and not in the clapped out old taxi that we’d been in a couple of days earlier. As we neared to Marrakesh the traffic slowly became heavier and we were glad to arrive mid afternoon.

Email ThisBlogThis!Share to TwitterShare to FacebookShare to Pinterest
Labels: Morocco