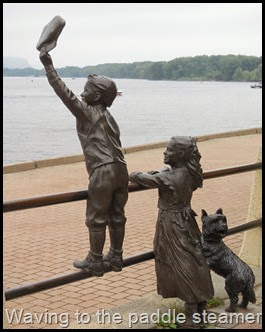 Driving west we eventually hit the mighty Mississippi River. The river forms the state line between Wisconsin and eastern Minnesota and as everyone knows it was a major seaway back in the early pioneer times.

These days it is pretty much just pleasure boats, barges and the odd tourist paddle wheeler that ply her fast flowing muddy waters.

Taking the scenic road north we followed the river for a day or so before doing a u-turn and heading inland and south towards Iowa. North Dakota, South Dakota and Iowa are three of the seven states that make up the area known as the Great Plains, and believe me those plains go on and on and on. It seemed that there was nothing but corn and wheat growing on those plains. The swaying green and gold crops were everywhere, dissected only by giant ugly wind farms that mar the landscape. 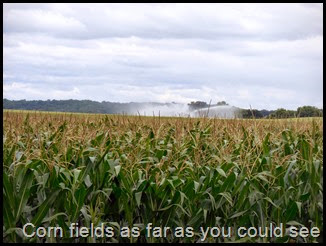 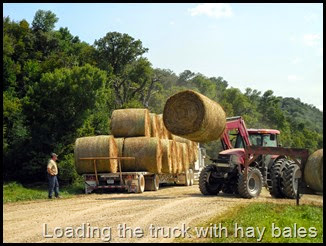 Apart from corn, wheat and wind farms, Iowa also has it’s fair share of Amish communities along the back roads and is the US leader in the production of both grain and hogs. Apparently Iowa has eight pigs for every person living in the state, now that’s a lot of bacon! 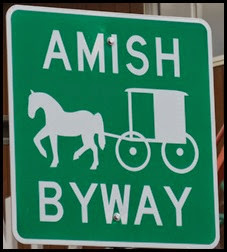 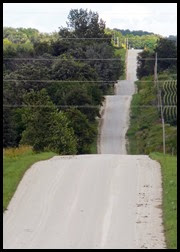 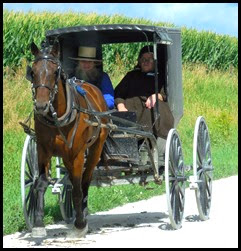 Sooner or later if you want to cover some miles quickly you have to hook into a major freeway. In order to get through the state capital of Des Moines we had to join the ranks of the zoom-zoomers and the zig-zagers, put on a brave face and drive like a local,aka… a bat out of hell. Our little stint on the freeway was short lived though as a gleaming gold dome towering above the city skyline caught our eye and we took the next exit to see what it was. A quick stop at the info centre revealed all. It was the top of Iowa’s state capital. 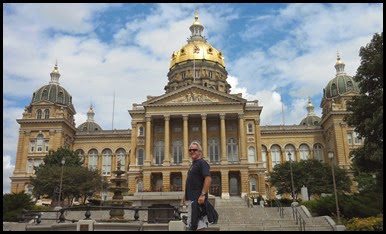 Yeah, yeah I know what you’re thinking, we seem to be becoming capital junkies all of a sudden. As you would have read in the last posting we’d seen the one in Wisconsin  and donkey’s ago the one in DC but this one looked way grander. You just about needed sunnies on to look at the outside. It was blinged up to the hilt. Once again we seemed to have impeccable timing and arrived in the foyer just as the afternoon tour was starting. 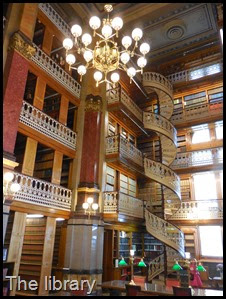 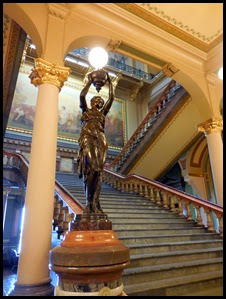 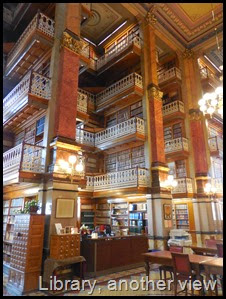 This capital was really impressive with beautiful spiral staircases, statues, giant murals, (what self respecting state capital would be without them), stained glass, marble arches and an unbelievable library. Of course it had all the usual fixtures as well, Supreme Court, The Senate and The House of Reps chambers adorned with fabulous chandeliers and past and present pics of the commander and chief. And then of course there was that dome. If it looked good from the outside then you should have seen it from the inside. 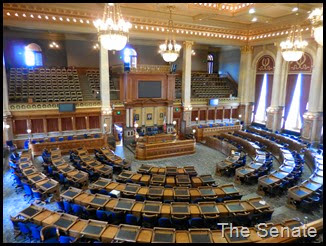 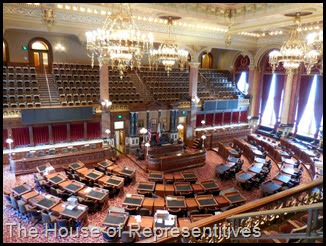 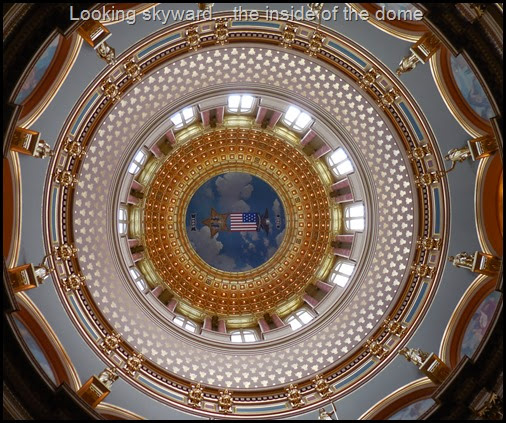 These guys really knew how to build and the whole package made Australia’s Parliament House pale into insignificance. Yet again we had another very informative afternoon, the guides that are employed are just so knowledgeable. It’s a real credit to them. 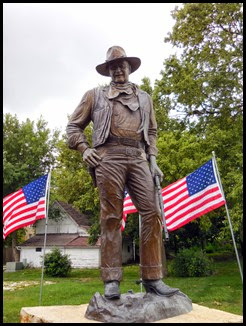 Iowa is also home to the Bridges of Madison County, made famous by the Meryl Streep /Clint Eastwood movie of the same name. These red sided wooden covered bridges built in the early 1800’s are scattered on the outskirts of the town of Winterset which also  just happens to be the birthplace of the king of the western movies, The Duke, John Wayne. His real name was Marion Robert Morrison born May 26th 1907. 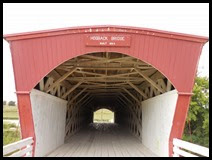 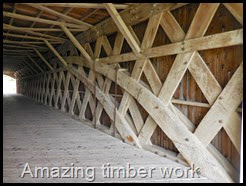 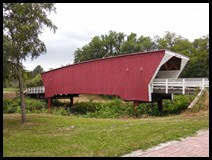 Over the next few days we travelled further west towards Nebraska. From what we’d heard they wasn’t much in Nebraska, just more dead straight roads, flat terrain, wind, tornados and tumbleweeds. So we turned north and ran along the border taking us to Council Bluffs and the Union Pacific Railroad Museum, which chronicles the enormous undertaking that it took to build this massive transport empire. 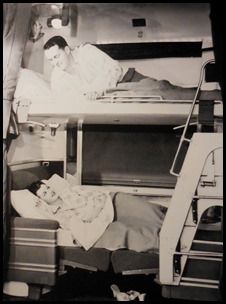 The driving of the golden spike in Utah on May 10 1869 signaled the end of the track laying race between the Union Pacific and the Central Pacific Railways. America’s transcontinental railway was born.

Train travel boomed in the 1920’s. It was the elegant and affordable golden era of travel and every night an estimated 50,000 Americans pushed out zz’s in a Pullman sleeping car.

Well the more “well to do” of society did it that way, everyone else relaxed the best way they could further down the train in cattle class. 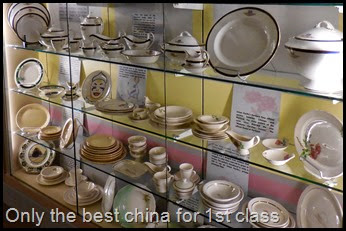 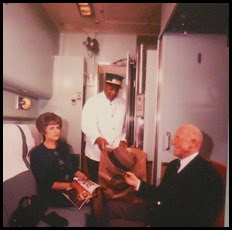 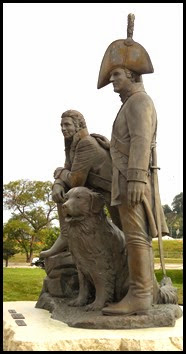 Moving on we toddled down the back roads of the Loess Hills Scenic Byway passing wind blown glacial bluff countryside. After driving for hours we both came to the conclusion that this area was very much over rated despite what the guide books say.

Following the Missouri River north for a bit we hit Sioux City where we spent a rainy morning visiting the educational Lewis and Clarke Interpretive Centre and learnt a whole lot more about these two intrepid explorers, their dog Seaman and the party who accompanied then as they mapped out a good chunk of the USA from east to west.

Inching ever westwards we hopped onto the I-90 and crossed the next state line into South Dakota. 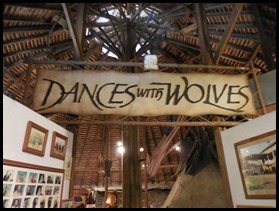 After a whistle stop tour of 1880 Town with it’s mock up of a western town and loads of memorabilia from the movie Dances with Wolves which was filmed in the surrounding area, we drove on to the unique desert landscape of the Badlands National Park. 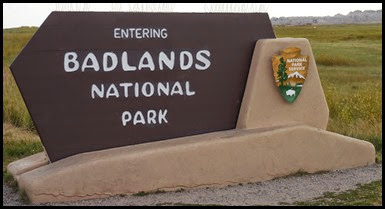 The Badlands, Mako Sica as it was known by the Lakota Indians, rise abruptly from the flat prairies, her spires, ridges and buttes jutting skywards. Covering 244,000 acres it is barren but beautiful. The heat is incredible and the silence is peaceful. No song of a bird, just the eerie whisper of the wind through the moonscape of gorges and canyons. 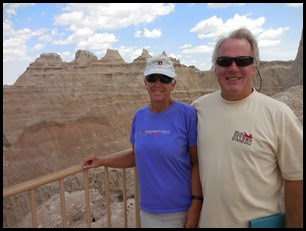 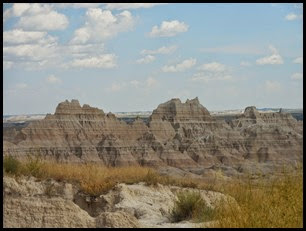 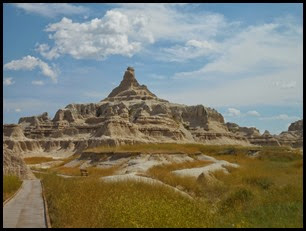 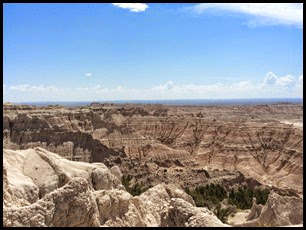 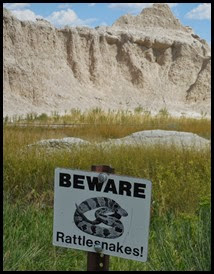 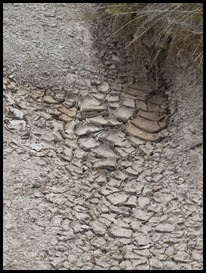 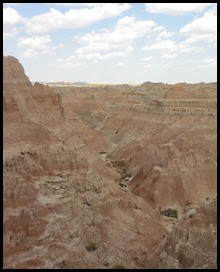 Where rivers once rushed by 65 million years ago today there are just a few dribbling streams. Some animals, bison, pronghorn’s, bighorn sheep and rattlesnakes inhabit the hiking only wilderness area of the park. Although to see them you have to be prepared to be completely self sufficient and hardy enough to rough it for a few days. We sure didn’t feel the need to go down that road just yet.