After leaving the delightful anchorages of St John, we made a final dash across to the BVI’s to say goodbye to our friends on Remi de, Good Trade and What If. With the start of hurricane season only two months away we would all be heading off in different directions. As none of us knew  when or where we’d meet up again, Norman Island was picked as the venue for our last get together. 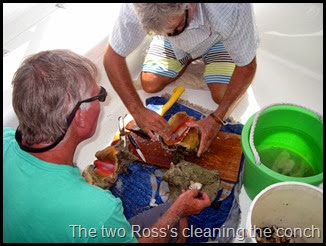 The timing for our last soiree couldn’t have been better. We had a stack of conch on board that needed to be dealt with and as the boys on GWTW were rather under skilled in this department, they needed a few tips from Ross off Good Trade on how to remove the tough little bastards from their shells. Ross is the master when it comes to fishing, hunting and gathering and can clean a conch in 30 seconds flat. It’s a messy business with bits of shell usually flying all over the cockpit but once you’re chowing down on them either in a salad or cooked up as fritters you forget all about that. After the conch lesson was wound up we all gathered at the Norman Island beach club sipping rum punches and talked about plans for a possible rendezvous in the future .It was fun and sad at the same time. 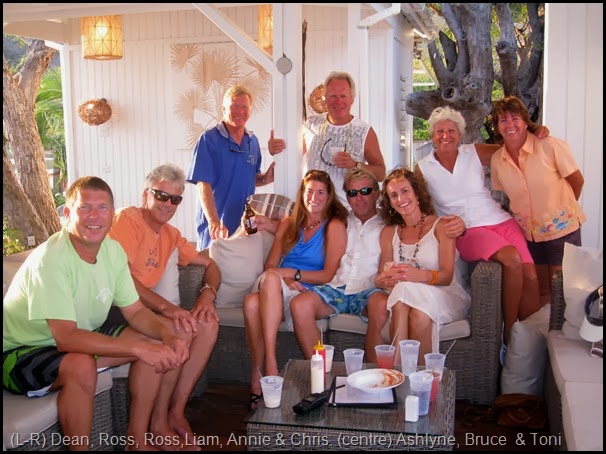 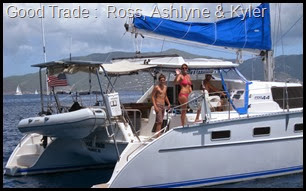 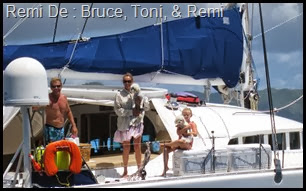 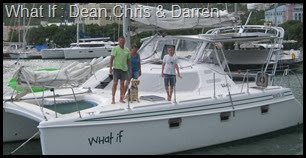 Following some last minute top ups of the pantry and cellar in Road Town we headed over to Little Harbour on Peter Island for the night. I have to say the reef that follows the shoreline here rates as one of my best snorkel experiences since we arrived in the Virgin islands in January. The fish life and coral were fabulous. For me it was a fitting way to end our time in the BVI’s. Later that afternoon we pulled up the anchor and headed back over to St Thomas in the USVI’s, arriving at Charlotte Amalie just on dusk. 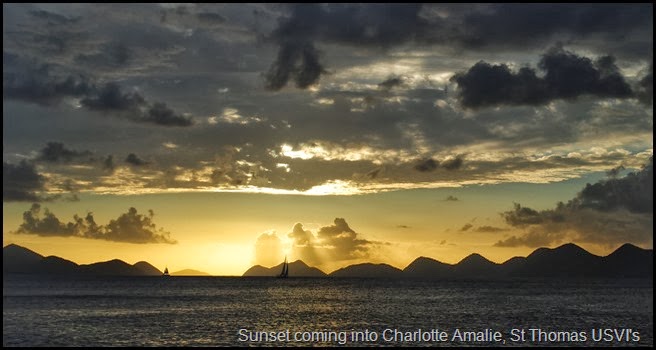 Our plan for the following day was to fuel up and get an early start for the 36 mile sail over to Culebrita, which is part of Puerto Rico. But as always cruising plans are never set in concrete. By chance we found out that the day we had earmarked for leaving  was carnival day in St Thomas. Our friend Ross was still with us so we decided to delay our departure for 24 hours so he could enjoy the spectacle of it all. It was a decision we didn’t regret. Liam and I had been to Carnival down in Trinidad in 2011 so we knew what to expect. We warmed Ross that It would be loud, very loud, there’d be lots of revellers as well as a multitude of scantily glad performers in all shapes and sizes. It would definitely be a fun day with lots of Kodak moments.

Early morning grey skies and drizzle looked like it might put a damper on the day’s events but that certainly didn’t stop spectators arriving early to stake out their claim on the main street. Armed with deck chairs, umbrellas and eskys,  there was no doubt they were staying ‘till stumps. The parade kicked off around 10am with masses of people lining the streets and cramming shop balconies to watch a hundred or so of troupes strut their stuff. The costumes were many and varied ranging from animal outfits to baton throwing girls in hot pants. Feathers, tassels and sequins were the order of the day. To say it was a colourful  scene is an understatement. 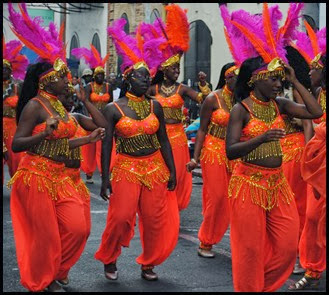 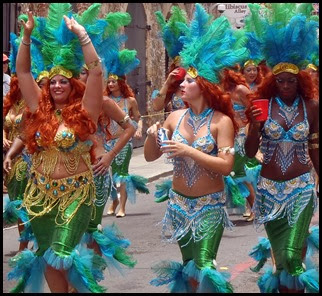 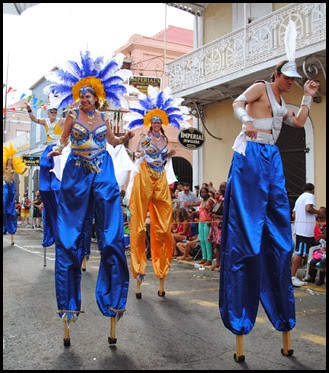 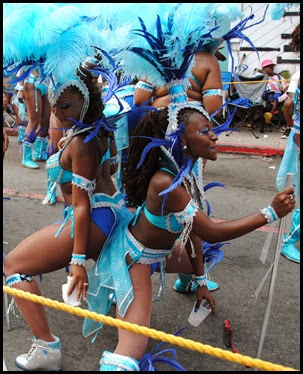 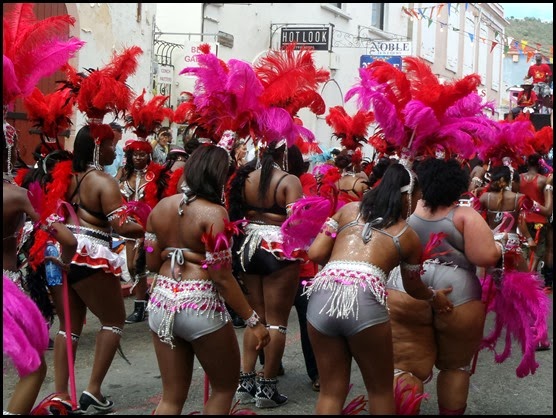 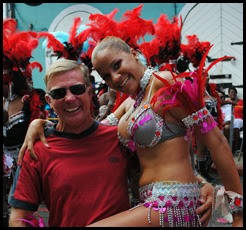 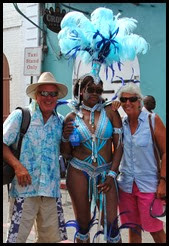 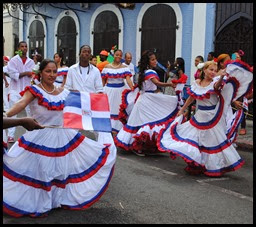 Hot weather and big crowds had the street vendors working their butts off. The wonderful scent of bbq chickens, seafood and other delicacies wafted through the air all day. With no such thing as a “no alcohol zone”, beer and rum punches flowed freely with not an inebriated person in sight. 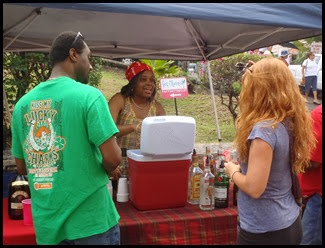 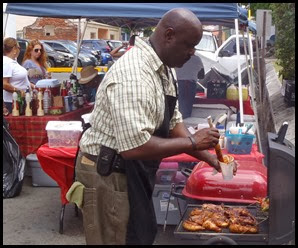 It had been a long day in the hot sun and by 6pm we retreated back to the comfort of GWTW. As with most big events they end with a bang and the St Thomas carnival was no different. Just after 8pm the sky exploded with fireworks.They were as good as we’d seen for a long time and we had front row seats on the decks of our boat. We’d had a great day out and the fireworks were the icing on the cake.There couldn’t have been a better finale for our last night in this part of the Caribbean. 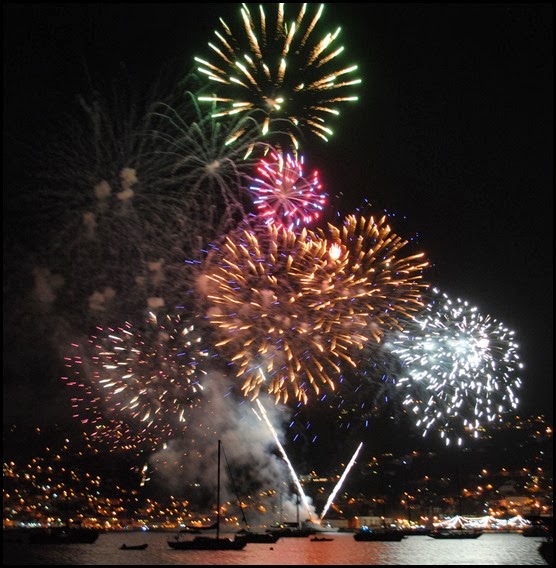 Email ThisBlogThis!Share to TwitterShare to FacebookShare to Pinterest
Labels: Caribbean 2013 - US Virgin Islands