One last whirl around the British Virgin Islands.

Our final weeks in the BVI’s were spent showing a long time friend from Australia around. Ross, the hubby of my best friend Pam, had flown in from Portugal following a delayed  delivery of a yacht across the Atlantic, he pulled the pin after waiting 5 weeks in Lisbon for the weather to settle down. Ross was last on board GWTW before we left Sydney back in 2006, so  it was nice to have him with us and  show him this part of the Caribbean that we like so much. His timing couldn’t have worked better as we were docked at The Moorings charter base marina  in Tortola for a couple of days finishing off some fiberglass repairs to the boat, so moving his gear onboard didn’t require the usual salty dinghy ride. The Moorings base is very impressive with berthing for over 500 charter boats. The place hums with activity and runs like a well oiled machine on any given day, but particularly so on  charter guest change-over day. 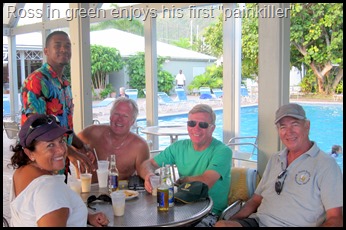 Aussie cruising friends, Karel and Phil  from “Tehani Li” were anchored just outside the marina while we were there, and they joined the three of us one evening for a swim and a couple of “painkillers”  by the pool. Welcome to the cruising life Ross !

Two days later with our  repairs finished we headed over to Norman Island where we caught up with Toni and Bruce from “Remi De”. Pretty soon Ross got the hang of how we spend most of our days out here. Apart from an endless list of boat chores, we’ve found that hiking, reading, snorkeling and catching up with friends, manages to fill in our days quite nicely. 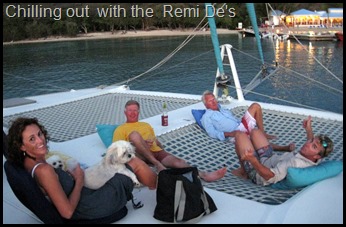 This year we’ve had three sets of visitors join us in various parts of the Caribbean and the one thing that’s amazed them all  is the incredible clarity of the water. Liam and I are used to it these days but for first timers, it’s just mind blowing. There’s usually an abundance of pretty reef fish and a good mix of colourful  corals.The underwater world just never ceases to amaze us.

From Norman Island we day hopped north stopping at many good anchorages and snorkeling spots along the way. They included the 1867 wreck of the steamship HMS Rhone lost during a hurricane, Deadman’s Bay on Peter Island, where Ross got up close and personal with a turtle, Marina Cay which has a fabulous reef and the huge and very popular rock formations of The Baths. 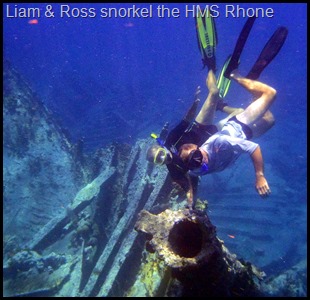 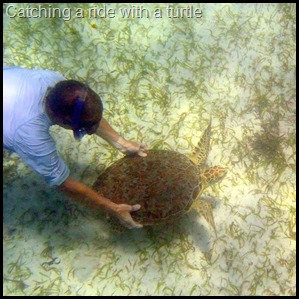 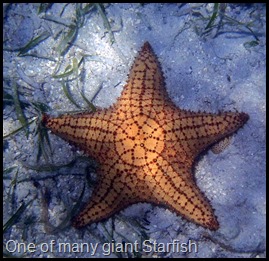 As always, our life out here on the water is dominated by the weather. We’d been in the weather god’s good books for a while but now strong winds were  forecast over the coming days, so we high- tailed it to the protected waters of North Sound on Virgin Gorda. Here we met up with more friends, Daryl and Annie off “No Rehearsal”. You really don’t have to go far before you bump into someone you know around here. We’d heard that the rather new and very gucci Yacht Club Costa Smerelda, sister club to the one in Porto Cervo Sardinia but not nearly as stuck up, put on an excellent lunch so the five of us decided to give it a whirl and we weren’t disappointed .The staff were super friendly and the food and prices good value. It was just a shame we didn’t take our swimmers with us as hanging the pool for a few hours would have topped off the afternoon perfectly. 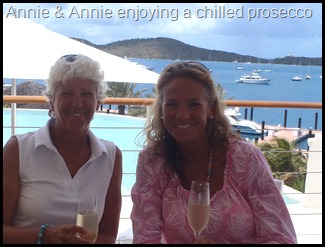 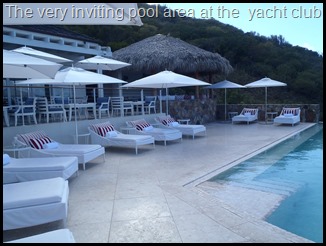 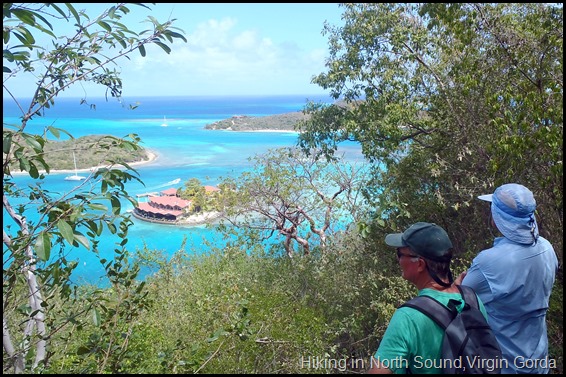 Continuing on our 3rd circumnavigation of the BVI’s this season, we said goodbye to our friends and sailed over to Monkey Point, although we are yet to see any monkey’s there. This is a bay where the big Tarpon hang out and it was pretty neat swimming with them. 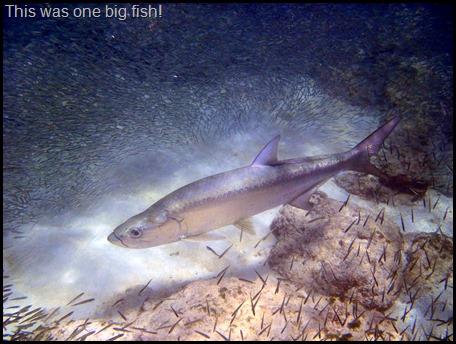 These gentle giants can grow as long as seven feet and weigh in at at 45kgs! The ones that we shared the water with were around 4-5ft long, and that was plenty big enough for us.

Along with a heaps of other types of fish, literally millions of tiny bait fish live here as well. At times they were so thick you couldn’t see anything else. That was until Mr Tarpon came along looking for his dinner and then bait fish made like the parting of the Red Sea. 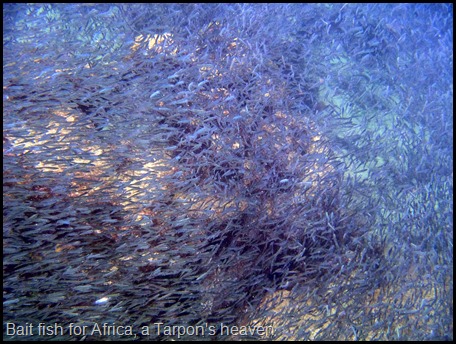 After a few hours of snorkeling we moved over to another of our favourite places, Cane Garden Bay on the north-west side of Tortola.

The shoreline  here is dotted with little cafes and sand-between-your- toes type beach bars.There is usually live music in the evenings and Myett’s serve a great eggs benedict for breaky.  As a added bonus there is also a good supermarket just a stone's throw from the beach. The bay has a lovely feel to it with the long white sandy beach backed by a line of beautiful palm trees. It’s a popular spot with both charters and cruisers. The charters pay their $30 and  take the mooring balls and the cruisers set up camp in the front row on their anchors. This arrangement works really well for both types of sailors. 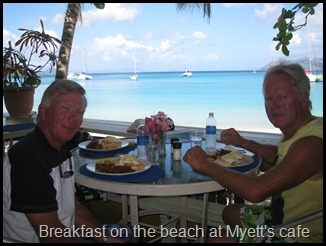 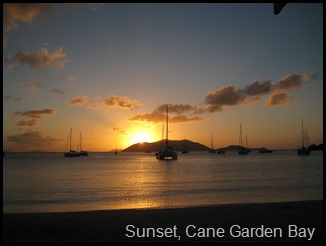 Tortola, the largest and most populated Island in the BVI’s ’s stretches 19 x 5km with it’s highest peak sitting at 530m.We’ve sailed around it many times but have never ventured inland. As the forecast wasn’t brilliant for the coming days hiring a car for a little sightseeing sounded like a good idea.The island is fairly mountainous and  we were told that most of the roads were very steep and narrow. That could make for an interesting trip!

Setting out early we headed  south-west past the locally famous Bomba Shack, a well known beach venue that hosts raging full moon parties. Judging from the amount of underwear adorning the outside of the shack it seems that it’s a weird tradition to leave a used memento behind, testament to a fun night out we guessed. Not quite your family friendly scene me thinks. 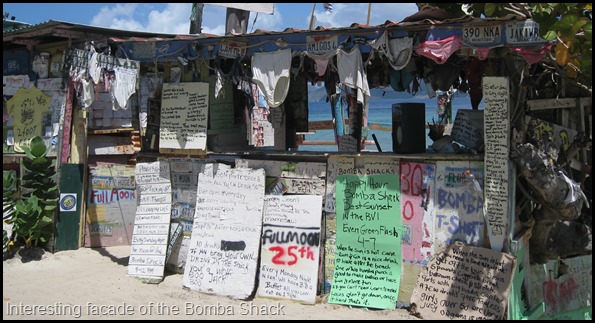 Moving right along our next stop was at a popular tourist stop named Sopper’s Hole. 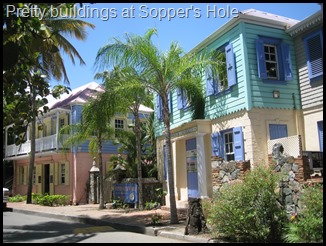 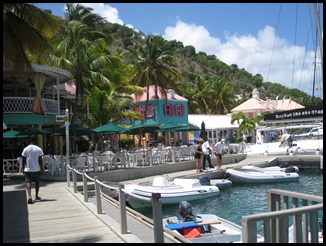 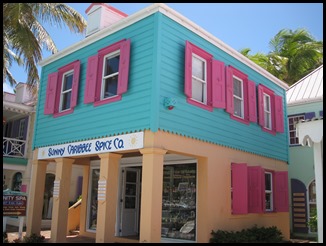 Sitting at the far western end of the island this is the first port of entry for anyone sailing across from the USVI’s or islands further west .It’s a smallish bay that’s dominated by marinas, mooring balls, ferry traffic and surrounded by brightly coloured shops and restaurants. Completely by chance we ran into American friends Ashlyne, Ross and their son Kyler from the catamaran “Good Trade” who had  just an hour before arrived from Puerto Rico. It had been over a year since our paths had crossed so our unplanned meeting  morphed into a chatfest and coffee stop.

Ross had been with us for only 12 days at this stage and he was very quickly coming up to speed on who all our cruising friends were and what they had all been up to. Driving further along the south eastern  shore  we passed through the busy main settlement, Road Town, and then continued on to Trellis Bay, the most easterly point on Tortola. From here our not so fearless driver Liam, (he really doesn’t do steep, narrow, winding  mountain roads very well)  took us back up the sheer ridge that runs the length of the island, over the top and back down the other side to Cane Garden Bay. 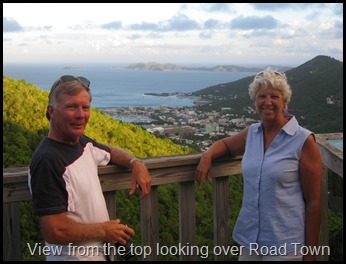 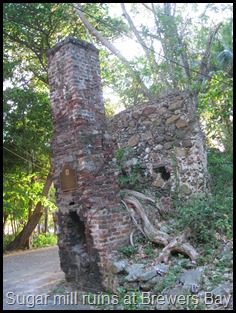 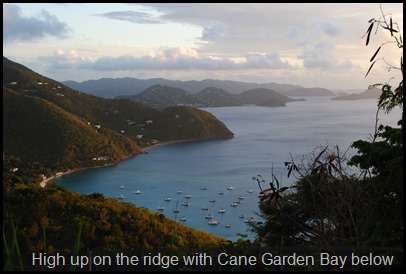 To be honest there’s not a lot of exciting things to see on the island, but for a day out away from the boat there was plenty  to keep us occupied.

Time waits for no one  and with that in mind the following day we took off to the Island of Jost Van Dyke. We’d been here many times before but had never made it to the “bubbly pool”. As the north wind had settled down over the past few days we knew that the surf wouldn’t be gushing in over the rocks and making the water “boil”, but we decided to hike out and  give take a look anyway. When the swell is really pumping the pool can be quite dangerous and apparently a few weeks before a tourist had been sucked out through the rocks with the surge and died. That certainly was not an issue on our visit. 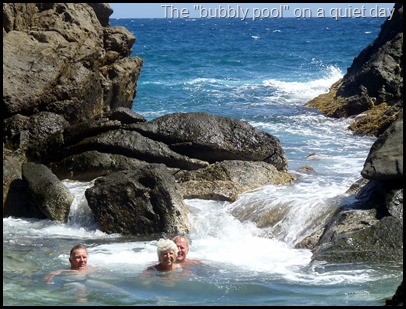 With the bubbly pool ticked off the list we moved further down the Island on to the next attraction, White Bay home of the Soggy Dollar Bar.The bay isn’t technically a bay as such but more a beach which is sheltered by a long offshore reef. The sand is incredibly white and the water colour is to die for. On a sunny day it’s pure heaven. White Bay is on the “A” list of tourist hotspots in the BVI’s and that is defiantly reflected in the number of charter boats that come and go during the day. The good thing is that they rarely spend the night  leaving this little piece of paradise for people like us.The photos below from the Soggy Dollar’s web cam are the proof of the pudding 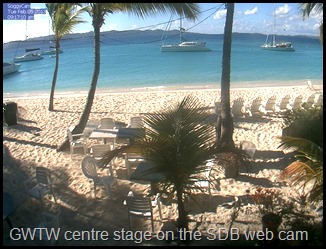 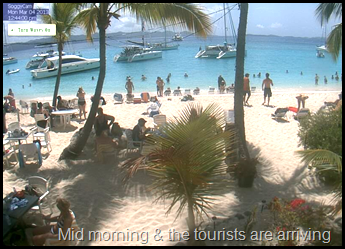 At the far end of the beach, less frequented by the tourists, is “Ivan’s Stress Free Bar”.This little gem, which we much prefer, definitely lives up to it’s name as you can see in the photo on the right.The Soggy Dollar Bar may lay claim to being the birth place of the “Painkiller” but Ivan’s has it’s own signature beverage, “The Bushwacker”.  Made with coconut cream, kahlua, rum and  crème de cacao it’s goes down like a milkshake. Sipping one of these little beauties under a palm tree is about as good as it gets. 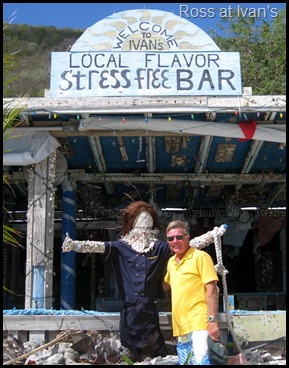 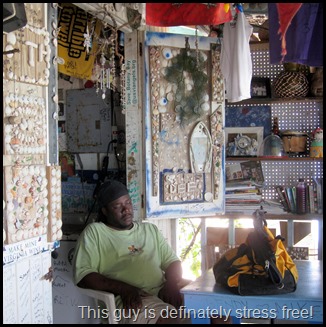 Leaving White Bay in our wake we motored around the headland to Great Harbour for our last night in the BVI’s. By now  Ross had seen just about everything the BVI’s had to offer,it was time to move on. Tomorrow we’d cross the border and sail across to the island of St John in the US Virgin Islands.