The Exumas
2nd –21st February 2012
The cruising life can be as frustrating as it can be rewarding, you have to take the good with the bad and one thing is for sure you can never ever set your plans in stone.Flexibility  and patience are a sailors best friends And so after pouring over the guide books and charts and planning our next leg to the outer islands of Little San Salvador and Cat the wind gods definitely had other ideas and through a spanner in the works.On the day that we intended leaving for the 40 mile passage across that little wind direction arrow on the top of our mast was pointing exactly where we wanted to go, and for any non sailors reading this ,that means you just can’t sail there without taking on the weather gods and believe me nine out of ten times the weather wins.. And so it was, that after leaving Rock Sound on Eluthera, instead of turning left we turned right and  headed south west towards the Exuma chain of islands and cays. Now, there is an upside to everything in this world, and on that particular day it came in the form of a fish, as we  reeled in a monster  4 foot long Mahi Mahi,the biggest fish that we’ve ever caught  Although we had visited the Exumas last year, on our way north through the Bahamas, it certainly wouldn’t be a hardship to go back again. 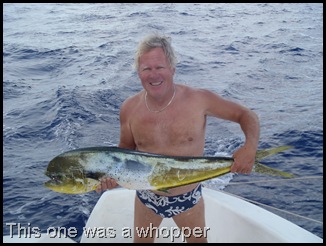 Lying in the central Bahamas, the Exumas are thought of as the most beautiful and popular cruising area in the entire Bahamas.It’s the stuff that holiday brochure are made of. Friendly people, warm, gin clear waters,stunning anchorages and long white sandy beaches. One of our first anchorages was at tranquil Pipe Cay.I say tranquil because when we went for a walk over to the Atlantic side of the cay the weather out there was wild and wooly and we were pretty glad that we were anchored where we were. 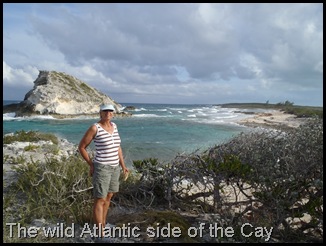 The water colours around Pipe Cay are magical and the camera just can’t do justice to the hues, it’s the type of place you just have to burn  into your memory.

At low tide a large sand bank appeared not far from GWTW so we decided that it looked like a mighty fine spot to hit a few golf balls. Yes, odd as it sounds we do have a set of clubs on board, a set I might add, that over our many years of cruising have rarely see the light of day.But today that was about to change. Being a tad rusty and lacking the style and precision  of the golfing greats we addressed each ball with the same determination as anyone who has ever looked down the fairway and lined up for a tee shot. After all this time away from the sport we still managed to hit a few good shots, though playing on the hard sand resulted in many a joint jarring experience. 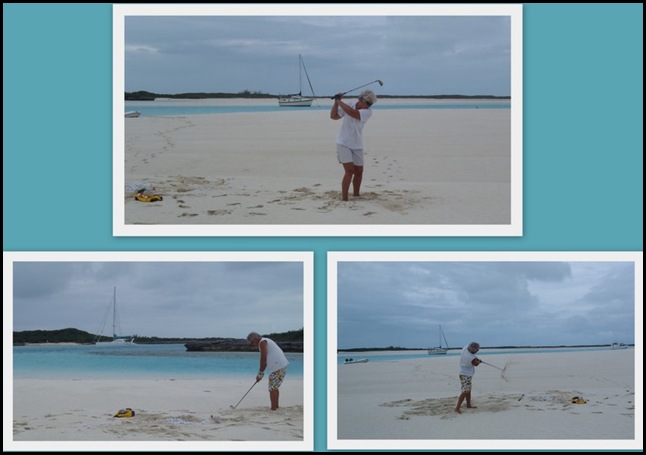 The following day was Superbowl Sunday, the most gala event on the American Football calendar. The contenders were the New York Giant’s vs The New England Patriots. Having spent nearly eight months in the USA  and watching many games on the TV we were rooting for  the Patriots. At this stage I should tell you that to find a yacht in the Bahamas that is  not flying a flag bearing the Stars and Stripes or  the Canadian maple leaf is a rarity.So it goes without saying that every enterprising restaurant and bar was holding a Superbowl party, with big screen TVs, half price drinks and sporting lots of  delicacies  American fare on their menus. We chose to watch the game at Sampson Cay, where the marina restaurant lured the punters in with the promise of a good night. Luckily they had two teles on the go so each teams’ supporters could have their own space , but of course within ear shot of the opponents revelers. It was a fun night watching the game with a lively crowd while we chowed down on buffalo wings, nachos and bbq ribs.It was a very close game but ten minutes before full time the Giants made a touchdown that put them in the lead.and  sadly that point was the demise of the Patriots. 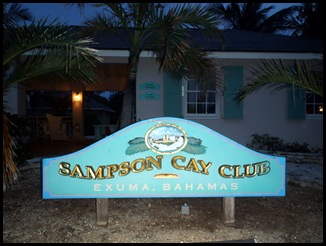 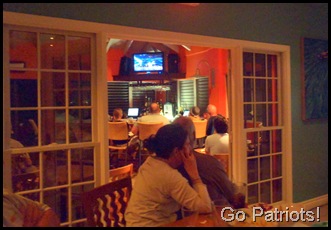 With nothing else to keep us at Sampson Cay we moved over to Staniel Cay some 6 miles further south. Staniel is the home of the famous swimming pigs and since our visit there last year the little piglets have grown up and there has been a new litter arrive on the scene.The porcuines still have their zest for chasing dinghy’s in search of food and with the number of cruising boats that were anchored near their beach it’s no wonder they are literally as “fat as pigs”. 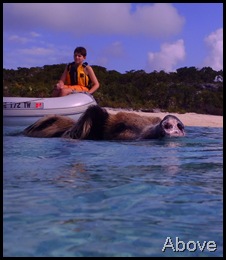 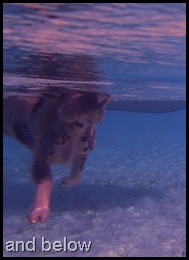 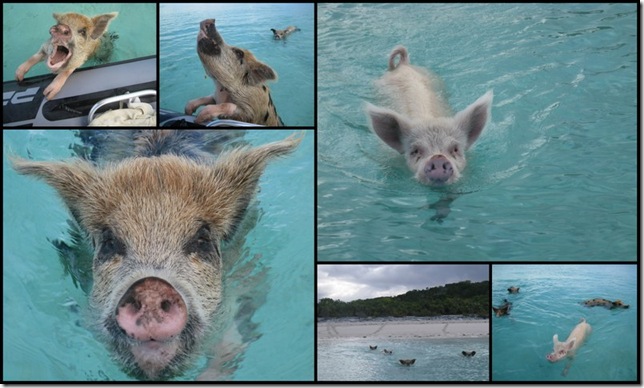 But Staniel is not just about the pigs, there’s a good little yacht club, a cruisers’ beach that has been set up with umbrellas, picnic tables and a fire pit, close by is the up - market resort of Fowl Cay, which was putting on a Valentines day dinner for about $300 per couple while we were there,needless to say we chose to eat at home and when the mail boat arrives each week with it’s cargo of everything from vegetables to washing machines  the supermarket has a line of people that stretches out the door. 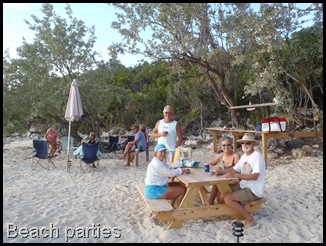 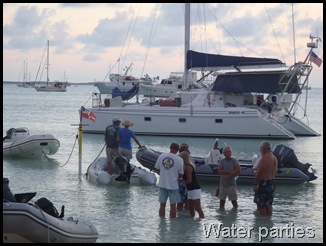 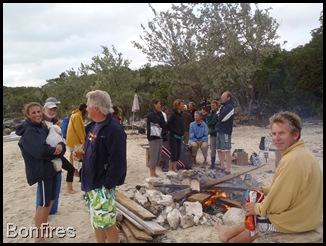 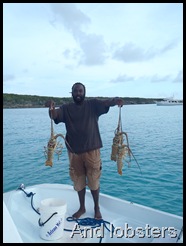 While we were at Staniel along with making some new friends we also caught up with Remi De who had arrived from West Palm beach and also Jupiter’s Smile and Christa and Frank from Hun Bun 111. By the time that it was time to move on again we had joined in a few beach gatherings, done a couple snorkeling trips including a really fast one with the current which felt like you were flying, bought a few lobsters from a friendly local  walked the length of town and a a couple of trails to the ocean side and watched lots of cruising dogs  running on the beach and enjoying life to the fullest. 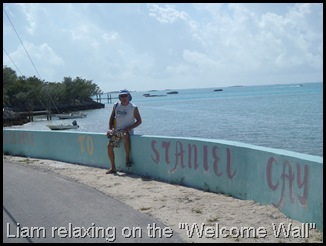 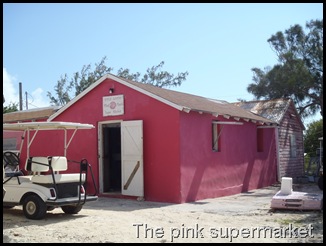 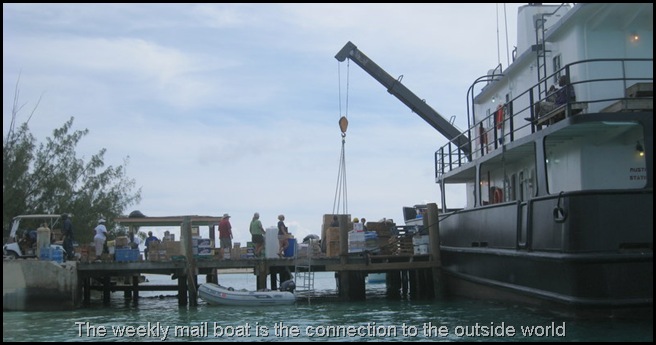 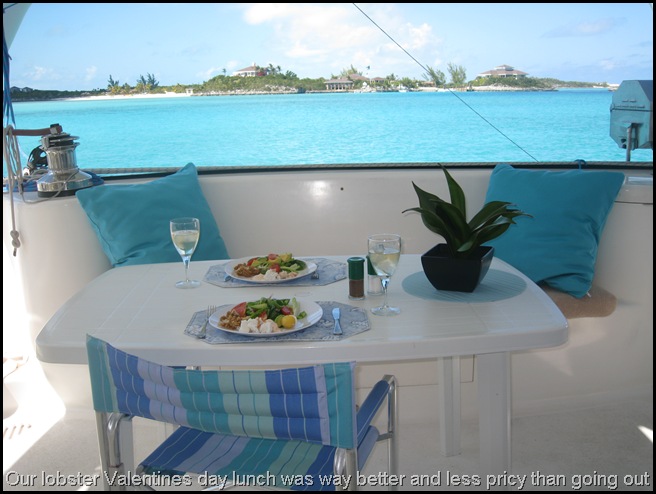 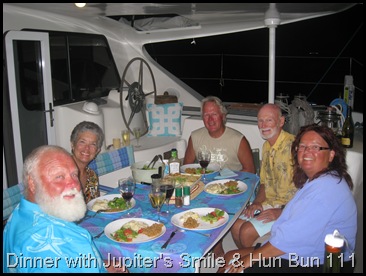 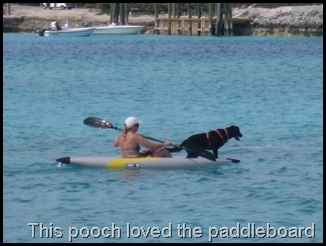 From Staniel Cay we moved on to Black Point , a small community whose claim to fame amongst the cruising community is the fabulous Laundromat which is a real drawcard for the ladies. It does also boast a lovely anchorage, a couple of small stores and restaurants and free wi fi  and bar snakes during happy hour at Scorpio’s.We stayed a couple of days and headed down to Little Farmers Cay another small town with a friendly yacht club which looks out over the aqua waters of the Exuma Banks. we just happened to be strolling along the waterfront when a local fishing boat arrived with a fresh catch of you guessed it lobsters, naturally Liam had to buy some and by doing that we supplement the fisherman’s meager incomes, so benefits both parties. 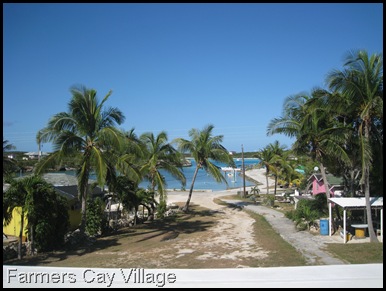 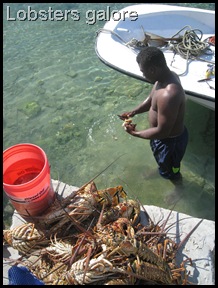 Our last stop before heading into Georgetown was at  the  isolated and not often visited Soldiers Cay . It was a slice of paradise. We had the place to ourselves except for a couple of Stingrays and a majestic spotted Eagle ray. The water clarity was amazing and there was a small reef to snorkel as well and with a little crescent  sand beach that beckoned for us to have a bonfire we found it hard to leave. 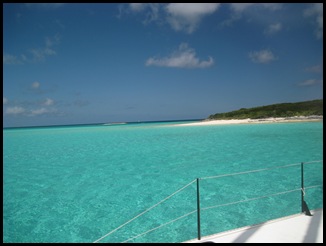 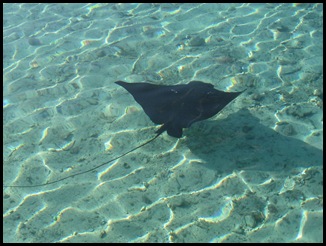 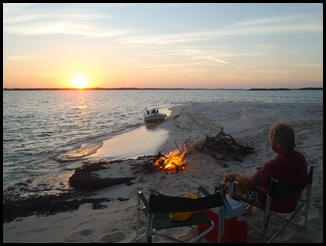 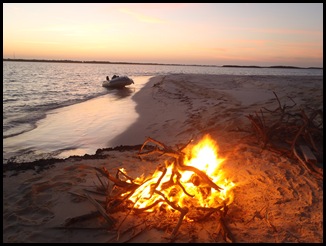 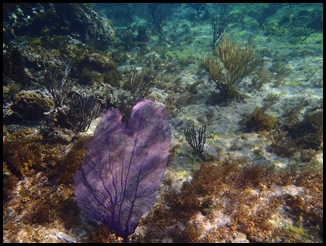 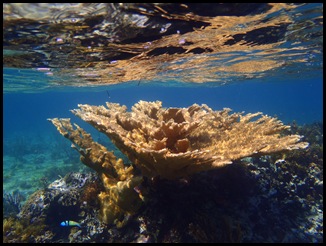 So we stayed for 2 days before making the run of 16 miles south to Georgetown where over 200 boats were gathering for the annual Georgetown Regatta which was due to start in a couple of days.The regatta covers a 2week period and from what we have heard it’s a mixture of both sailing and land based events. Sounds like it could be fun so we might just poke our noses in and see what it’s all about, stay tuned for my next addition to the blog and I’ll let you know  how it went.
******************************************* 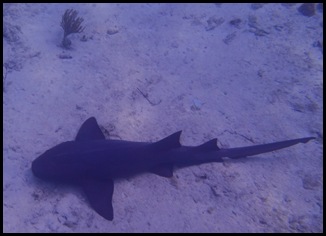