NEW YORK CITY, Slipping along the East River.
23rd July
Leaving the Chesapeake Bay at first light, we headed up the Delaware and New Jersey coasts with a mixed bag of sailing conditions. New York City was around 260 miles ahead of us and we couldn’t wait to get there. Our early morning departure had given us a light southerly breeze and flat seas, perfect conditions to road test our newly repaired spinnaker. The spinnaker hoist went like clockwork and the pretty green, white and grey sail filled and floated gracefully above our bows. It was poetry in motion and what and as Liam puts it “a real  rush to see it up there again”. The repairs looked good but would need a minor adjustment next time we revisited Hampton in a few months time. Sailing under kite for the next few hours was great until the wind gods decided that we were having way too much fun and changed the strength and direction of the wind. From then on our passage became a frustrating combination of motoring, motor sailing and just to make it even more challenging, a decent amount of  fog  was thrown in for good measure. After 36hours we finally put the anchor down at Sandy Hook, an aptly named small anchorage in Lower Bay just 7 miles from the mouth of the Hudson River. Together with our friends on Remi De, we watched as the sun set into the mist on the bay as the lights of Manhattan reflected an orange glow on the cloud cover in the distance.
We’d been hoping for a beautiful day for our transit past the Statue of Liberty and the Manhattan skyline, and we weren’t  disappointed. As we motored up towards the bay the city skyline slowly came into view. 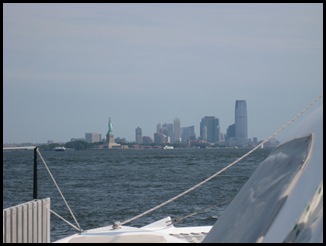 The last time we’d seen this sunning vista had been back in the early 90’s. The world has changed so much since then and the one thing that hit us most was the void in the skyline where the World Trade Centre towers had once stood.
It was a beautiful day and we were able to get right up near what would have to be the most recognised statue in the world. There, towering above us stood the grand lady who has welcomed visitors and immigrants to this wonderful city and country for decades. 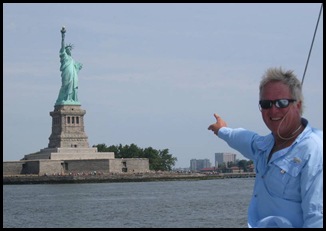 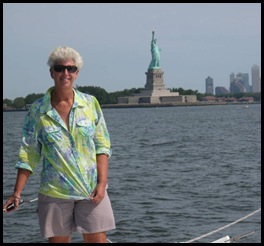 After sailing over 31,000 miles and across two of the planets largest oceans, here we were standing on the deck of our trusty stead “Gone With The Wind”, only meters away from the Statue of Liberty . It was an incredibly emotional moment for us and we’d like to thank  our good friends Bruce and Toni from Remi De for capturing that special moment on film. 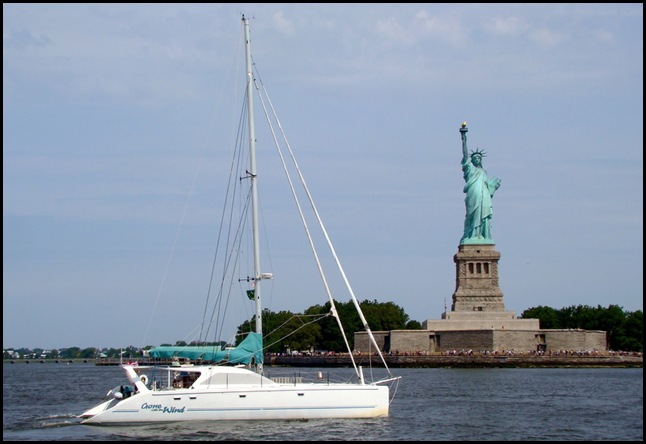 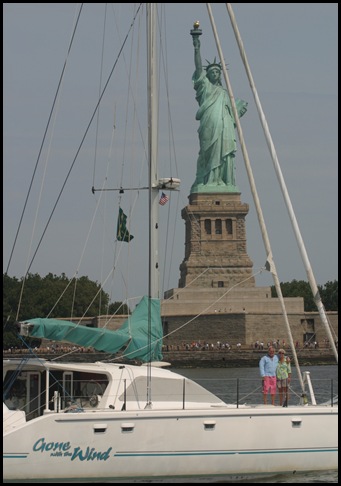 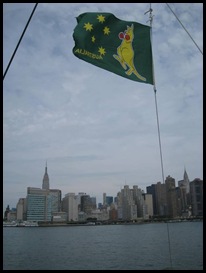 Liam  also hoisted our Boxing Kangaroo flag and it flew proudly  aloft as we passed the city. After we had our pictures taken then we repaid the favour and took some of Remi De. It was great to have two Australian flagged yachts there together. 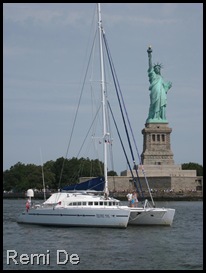 Leaving Liberty in our wake we turned into the East River which, as the name suggests, runs along the east side of Manhattan Island and the city of New York. Here we met up with No Rehearsal who’d arrived in New York a few days earlier. From the shore the three cats heading up river would have made a good sight. Again, heaps more pictures were taken, this time with the impressive city skyline behind.Thanks also to Daryl and Annie for their cachet of great pics.
Now, New York wouldn’t be New York without a celebratory drink, so for this special occasion we popped the cork on a chilled bottle of Moet and toasted  our achievement to the dulcet tones of a very fitting  song by The Eagles’ “ In a New York Minute” 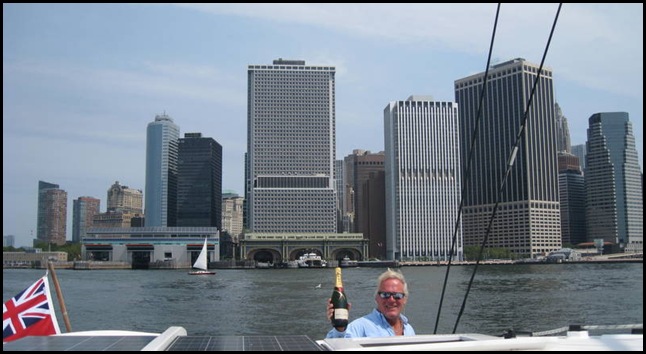 Timing is everything when you are transiting the East River. One section of the river is known as “Hells Gates” and for good reason. The tide races through here at at a speed of 6 plus knots so you really want to time it right, or else it will take you hours to cover this patch of river. When we went through  the speed readout on our GPS showed us hitting 11 -12 knots as we raced through the turbulent waters. It was a spectacular trip up the river, the city exudes such vibrancy. Sightseeing helicopters buzzed overhead and fast ferries including the huge orange Staten Island ferry. 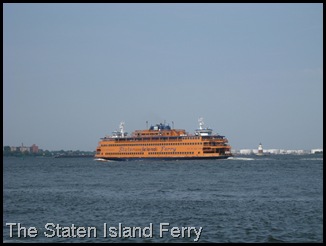 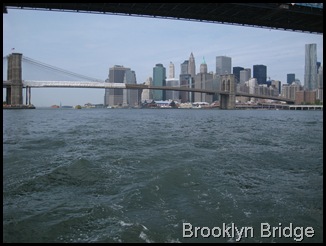 It was a thrill to pass under the Brooklyn Bridge and  float past mirror glassed skyscrapers, penthouses and well known buildings such as the Empire State Building, and the Chrysler and United Nations Building. Further up river there was even an imitation Sydney Harbour Bridge. 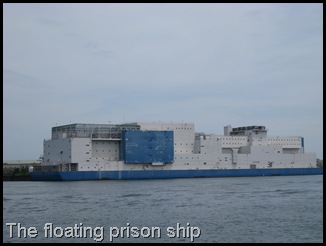 One very unusual floating and not very attractive building that we passed well up the other end of the river belonged to the correctional authority and was part of their jail system. It looked just like a floating concrete box that was about as inviting as  Alcatraz.
After a couple of hours we left the East River and New York behind us and motored out into the calm waters of Long Island Sound. Exploring New York would have to wait until our return in a few months time and that would be something  very exciting to look forward to .
*****************************
Posted by Gone With The Wind .... on safari on Monday, October 17, 2011