THE CARNIVAL MAY BE OVER…
BUT BOAT JOBS NEVER END !

Well after having such a great time during carnival week it was time to get back to work. The antifoul that we had put on in last year was not living up to our expectations and we knew that it would not last another cruising season.
The decision was made to haul GWTW at Peak’s Yacht Services while we were still in Chaguaramas. She would be out for about a week while we re antifouled her and did a few other necessary jobs.
It is always quite nerve racking watching our girl get hauled  as we feel like nervous parents watching, as total strangers take control of her  as she is lifted from the water and hangs in the travel lift slings. 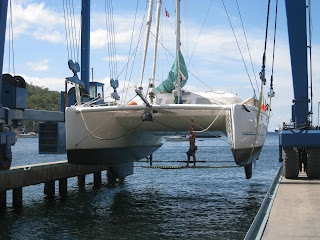 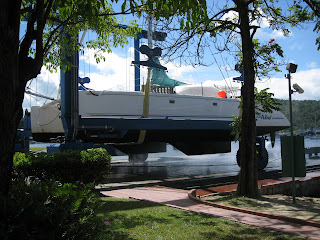 There are very few marinas that can haul us because of our 8 meter beam so sometimes we have to make hay while the sun shines. The boys at Peaks were excellent at their job and as it turned out we really didn’t have to worry. She was in good hands.
After about an hour we were settled on the hardstand in an excellent spot just a few meters from the marina restaurant, amenities and the chandlery which was  also in the yard .The only downside to the haulout was that as the voltage in the yard was 220/60cycles we could not plug in to power. Our inverter is rated at 220/50 cycles, bummer!. All I can say is thank heavens for solar panels and sunny days.
We had all good intentions of starting the grubby job of sanding back the old antifoul the afternoon that we were hauled but the heat was far too intense to work, so that job was postponed till the following morning.
Up early to beat the sun, well maybe not quite at the crack of dawn, we spent most of the next morning sanding off the old black antifoul and we looked like a pair of chimney sweeps by the end of it. The fine black dust / paint was all over us and our clothes. It was stinging our eyes and clogged our nostrils…next time we might pay the yard boys to do that part.

The rest of the week disappeared quickly as we put on a few coats of “ 44 “.  Feeling the need for a facelift we decided to go for grey antifoul as a change to the black that we’d been using  since GWTW was launched back in 2004.
After finishing the first coat we did start to worry about our choice as it appeared more of a mushroom pink colour than grey, but hey the experts in the yard kept telling us that it would change colour once it was in the water and we hoped they were right. 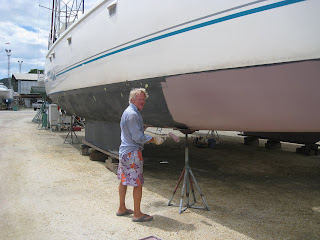 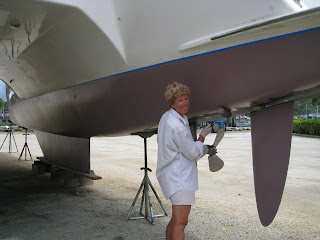 We did a few other jobs after the painting was finished and made numerous trips to the Budget Marine Chandlery just one boat yard away, purchasing lots of well priced boat goodies.
While we were on the hard stand our dear friend Bridget from ”White Rose” underwent back surgery for an injury that she had met with a few weeks before. She was in the hospital for about a week and true to form she bounced back from her operation like the trooper that she is. Unfortunately for Bridget and Peter this injury put a line through the remainder of their cruising for this season and the plans that they had to join us cruising up the east coast of the .
“White Rose” is now  hunkered down for the  hurricane season in Trinidad.
Bridget being in hospital certainly didn’t dampen her spirits for an impromptu party. As Liam’s actual birthday rolled around while she was enjoying being a patient we took the opportunity of taking the party to her. So on Sunday the 20th after going to church, yes a good way to start
Liam’s 60th year on the planet, we rocked up to her bedside with yummy chocolate cake and candles. We figured the nursing staff might not like the idea of her drinking champagne so we’ve left that part of the celebration for another time . 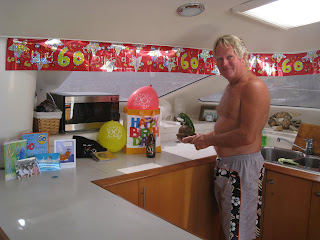 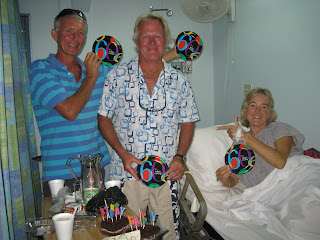 With all our boat chores finished and GWTW ready to hit the water again, we spent our last evening on land joining with some new friends in the boat yard for a very laid back pot luck BBQ birthday dinner for Liam.
Our relaunch went as smoothly as the haul out had been and we were back out and on the anchor within a few hours. 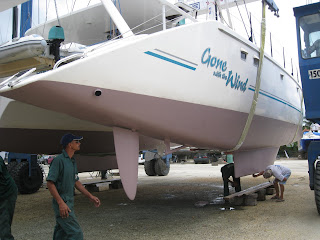 GWTW sporting her new bottom colour and
a last minute touch up to the  antifoul before
our relaunch.
﻿
﻿ 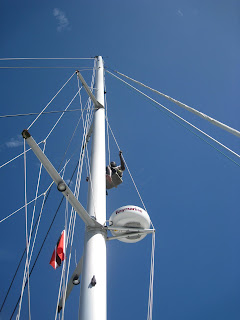 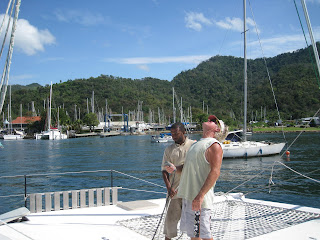 The next day we made a fleeting visit into the capital,  to have a look around and purchase a few  computer spares, DVD’s and do a little general shopping.Then it was back to the boat and into customs to check out of . After completing the clearance paperwork there is a grace period of 24hours to leave the country so we hit the duty free store near the customs dock and stocked up on extremely well priced Chilean wines and a variety of spirits and beer. From here we moved down the bay to a small fuel dock frequented by local fishermen and topped up our diesel tanks as well as all our jerry cans for the bargain basement price of $1.50 tt or US99c per litre.
We spent our last afternoon and evening  in peaceful and at 2200 that same day we weighed anchor and sailed under the cover of darkness towards and the islands to the north.
Would we recommend coming down to Trinidad? Yes we would.Our experiences here were great and we may even come back again next year !
﻿
﻿ 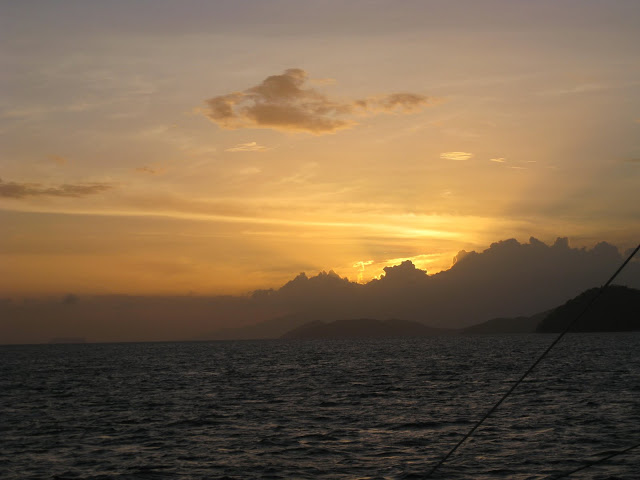 Email ThisBlogThis!Share to TwitterShare to FacebookShare to Pinterest
Labels: Trinidad 2011